The big news — literally — was Apple’s cash hoard, which has swollen to $256.8 billion — over a quarter of a trillion dollars. Perhaps Apple will be announcing macOS 10.13 Erebor at WWDC in honor of the dragon-plagued mountain that houses an equivalent treasure trove in J.R.R. Tolkien’s “The Hobbit.”

In other good news, the Mac continued its unlikely ascent, with a whopping 14 percent year-over-year revenue boost, with 4.2 million units sold. Mac sales have accounted for $25 billion of Apple’s revenue in the past year.

Services revenue was also once again a bright and shiny spot for Apple, increasing year over year by 18 percent and accounting for some $7 billion. Cook attributed the growth primarily to Apple Pay, which has seen transaction volume climb by 450 percent over the past year, and to double-digit revenue growth in Apple Music and iCloud Drive subscriptions. Apple CFO Luca Maestri said Apple’s goal is to double Services revenue by 2020. Given the stratospheric rise of the Services segment for the past several quarters, that seems entirely doable.

There was less enthusiasm surrounding Apple’s core iPhone business. It saw revenue growth, but just barely: 1 percent year over year, with a total of 50.8 million units sold. Apple must be making more on each iPhone, since the company actually saw a 1 percent decrease in units sold compared to the same quarter last year. Cook said Apple had miscalculated the product mix, with the iPhone 7 Plus being more popular than expected, which might explain how Apple made more money with fewer sales.

On the negative end of things, the iPad’s downward revenue spiral continued, posting a 12 percent drop year over year, with only 8.9 million units sold in Q2 2017. Nonetheless, according to Cook, although iPad sales growth continued to decline, the quarter’s results did exceed Apple’s expectations. CFO Luca Maestri also noted “supply constraints” for iPad, implying that might have been one cause for the lower sales. 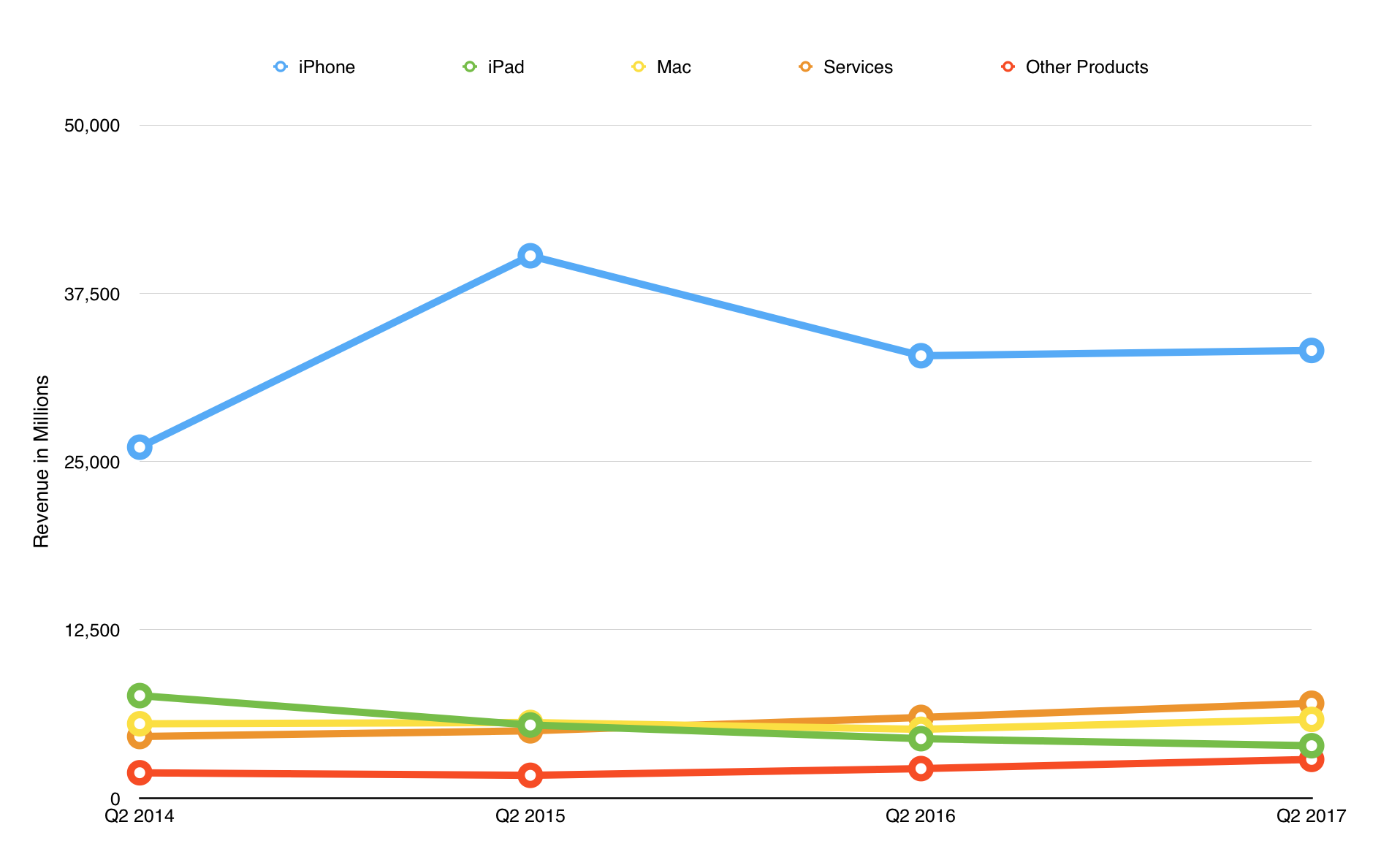 The Other Products category, which took a beating in Q1 2017 (see “Apple Sees Apparent Return to Growth with Q1 2017’s Record Results,” 31 January 2017), recorded a staggering 31 percent increase in year-over-year revenue. That’s good news for fans of products like AirPods, Apple Watch, and Beats headphones, which Cook identified as the primary drivers of growth. “Our revenue from wearable products in the past four quarters was the size of a Fortune 500 company,”
Cook said.

Internationally, Apple saw a 14 percent revenue drop in its Greater China operating segment, which would be more worrisome had the company not also tallied an 11 percent increase in the Americas, a 10 percent increase in Europe, a 5 percent rise in Japan, and a very healthy 20 percent increase for the rest of the Asia Pacific market. However, Apple did see double-digit Chinese revenue growth from the Mac, Services, and retail. Cook made a point of noting that Apple’s results in China were once again trending upward, and he remains “very enthusiastic” about China.

Speaking of retail, Cook said that Apple Retail is entering a new phase of its life, with new experiences and new designs thanks to retail chief Angela Ahrendts. Cook highlighted Apple’s new store in Dubai, which is the 495th Apple Store location. It will be interesting to see if Apple makes a fuss over the 500th store.

Apple is looking to make nice with the current U.S. administration, which has been talking about reducing taxes on offshore corporate earnings. Cook made it a point to mention that Apple had created 2 million jobs across all 50 states in the U.S., and he added that Apple spent $50 billion last year with American suppliers and developers. “Apple is a company that could only have been created in America,” Cook said. This statement turned out to be the beginning of a campaign by Apple to tout its impact on the American job market (see “Tim Cook Touts Apple’s American Jobs, Promises More,” 4 May 2017.)

Finally, Apple has expanded its $250 billion capital return program to $300 billion, which includes an increase in the company’s quarterly dividend for shareholders. On 18 May 2017, Apple shareholders will receive a dividend of $0.63 per share (up from $0.57 per share last quarter, a 10.5 percent increase). Maestri said that Apple expects to keep increasing the dividend every year, and Apple expects to return $89 billion to shareholders over the next eight quarters.

All told, Apple’s quarterly financial performance fell right in the middle of Meh Valley. The company’s revenue and sales results were neither outstanding nor dismal, merely OK, and, as if in imitation, the quarterly analysts’ conference call was unusually low energy.

The fact is that we’re seeing the same non-dramatic, boringly consistent signs we’ve observed each quarter of the past year: the iPad in slow decline, Services on a steady rise, and a topsy-turvy Other Products category. With Apple’s financial security buoyed by its quarter of a trillion dollars in cash, investors might have some long-term concerns about an inevitable slowdown in iPhone growth, but, in the here and now, increased stock dividends should keep them happy.