As Adam explained in “Apple to Deprecate 32-bit iOS Apps” (15 May 2017), Apple has been slowly tightening the noose on 32-bit apps, first introducing 64-bit processors in new devices, then requiring that newly submitted apps include a 64-bit “slice,” then permitting submission of apps without a 32-bit slice, and now warning users that 32-bit-only apps won’t run in future systems. You may even now be seeing some favorite old app threatened with extinction. And you may be wondering why the developer doesn’t just update it for 64-bit and keep it alive.

If the App Store no longer lists this app, there’s your answer: the developer is no longer paying Apple the annual $99 membership fee and thus isn’t actively maintaining the app. But even for an active Apple Developer Program member, updating an old app to 64-bit isn’t so simple. True, it’s usually trivial to turn on 64-bitness and recompile the app. But when an app project is opened and compiled with the latest version of Xcode, it is linked against Apple’s most recent system software development kit (SDK). That changes everything. The most recent system is iOS 10, and the app may not be ready for iOS 10.

Reviving TidBITS News — Let’s take as an example the TidBITS News app that I’ve just updated for iOS 10. It was last compiled against the iOS 6 SDK. So how did it manage to keep running in iOS 7, 8, 9, and 10? Basically, the device’s system has been giving TidBITS News a lot of help, essentially by pretending to be iOS 6. A screenshot of the old TidBITS News app next to the new one is a dead giveaway: 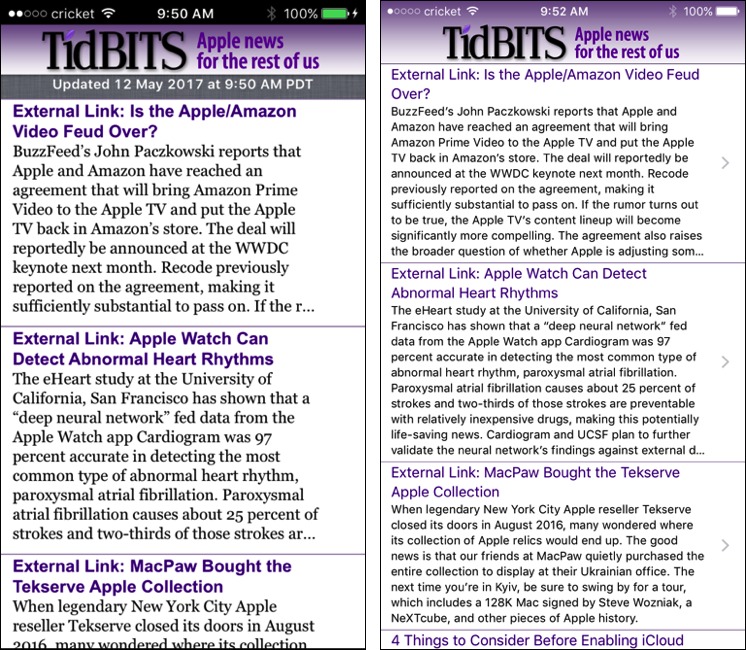 On the left, you see TidBITS News 1.5 running under iOS 10; but it doesn’t look like an iOS 10 app. There’s a separate black status bar (and there’s a black linen-weave background, visible behind the date display, that Apple abandoned years ago). This is iOS 10 emulating iOS 6. Compare that to the new TidBITS News 2.0 app on the right.

iOS 10 apps have a transparent status bar; the navigation bar, with its gradient background color, stretches up behind it. (I’ll talk about other interface changes later.)

And the app’s look is the least of our worries. To compile and run as an iOS 10-native app, TidBITS News must speak iOS 10. Technically, it must adopt the iOS 10 application programming interface (API) — the way an app talks to the runtime. A lot has changed under the hood, since iOS 6, in how you do that. That’s why, following the publication of my developer book “Programming iOS 6,” I’ve had to write four subsequent editions (entitled “Programming iOS 7” and so on).

To revive TidBITS News, therefore, I effectively had to rewrite the code from scratch as if I were creating the same app today, doing things the iOS 10 way. Luckily, TidBITS News is a fairly small, simple app; it has only three “scenes” — the master view (the list of article headlines and blurbs), the detail view (one complete article), and the player view (for listening to a recorded version of an article). But imagining a much more elaborate app, you can appreciate why a developer might not be willing to recast an old 32-bit app as 64-bit — it could be more work than it’s worth. (And the fact that Apple forces all updates to be given away for free means that it will generate absolutely no income from existing users. Is it
any wonder apps are abandoned?)

The rest of this article describes how the iOS 10 TidBITS News app differs from the iOS 6 version. If such technicalities don’t interest you, just download the new TidBITS News and check it out! Even if you’re not a developer, however, you might find the details to be an interesting illustration of how much iOS has changed in just four years.

Language — The iOS 6 programming language was Objective-C. With iOS 8, Apple introduced Swift, and I chose to rewrite TidBITS News in Swift because that has made the app’s code much easier for me to read and maintain. I’m sorry, diehard Objective-C fans, but I just find Swift a lot more elegant and legible.

On the downside, switching to Swift makes the app a larger download, because a Swift app must include the entire Swift language — Swift isn’t yet built into your device’s system the way Objective-C is. 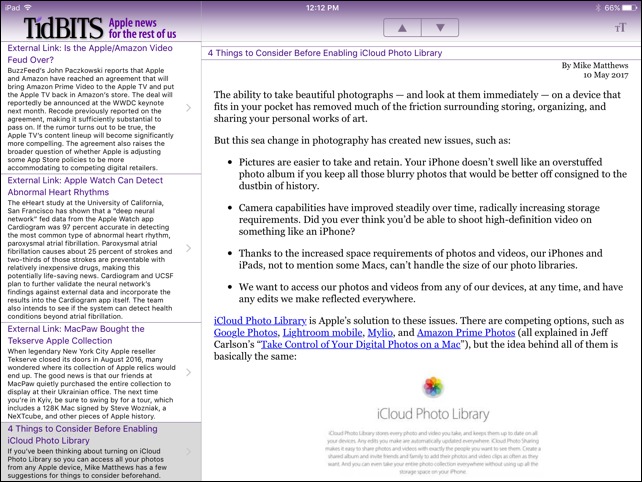 In iOS 6, the split view was an iPad-only widget. That meant that TidBITS News was effectively two apps in one, with two completely different interfaces and two distinct sets of code for dealing with them.

This change has given me more control over how the player view appears. There used to be an ugly QuickTime logo that I couldn’t get rid of; that logo is now gone. On an iPhone, the player view covers the screen; on an iPad, it is inset somewhat, with the rest of the interface visible darkly behind it. This is much less obnoxious on the large screen, I think. (You, the user, can make the player itself fullscreen, but my advice is: don’t. If I could have found a way to prevent you from doing this, I would have.)

iPad Split Screen — Return with me now to those halcyon days in 2010 when I first wrote TidBITS News. In those primitive times, developers worshipped a magic number: 320. The iPhone was 320 pixels wide, and that was an immutable fact — so much so that I had actually hard-coded it into the app. The iPad, too, came in only one size, and the split view master display was also 320 pixels wide. In effect, the iPad’s master display was an iPhone inside the iPad.

Over the years, as Apple has introduced more hardware, iPhone screens have become wider and iPads have become bigger. As if this weren’t bad enough, iOS 9 introduced split screen mode, which lets users of modern iPads slide another app’s interface in from the right side. You can even resize the split to make two apps share the screen simultaneously. I found coping with this to be the hardest part of the rewrite — so hard, in fact, that for a time I contemplated opting out of this feature entirely. (There is a switch for turning it off in the app bundle’s system settings.)

The difficulty is two-fold. First, depending on the device and the size of the split, the app effectively changes from an iPad app to an iPhone app, and then back again when the user removes the split, in real time. Second, the range of possible sizes, and in particular the range of possible aspect ratios, that the app can adopt is bewildering, ranging from exceedingly tall and thin to virtually square. This turn means that a split view’s master view can have even more possible widths.

A modern app’s interface must, therefore, be planned so as to cope with these changes. I think I’ve managed to do that, but honestly, I’m not entirely certain. I wish Apple had never introduced this feature.

Give It a Try! — I’m fond of the TidBITS News app. It’s how I read TidBITS! Just as important, I use it as a teaching tool, because it illustrates a number of fundamental aspects of standard iOS app architecture. So I wanted to keep it going, and I’ve used the threat of extinction under the new 64-bit regime as an excuse to do so.

If the old TidBITS News app was too crusty for you, I hope you’ll give the new version a try. It’s free, and will remain so as long as I maintain it.