Early in 2017, I wrote about Setapp, an intriguing subscription service that provides access to a slew of carefully curated Mac apps for a $9.99 monthly fee (see “Setapp Offers Numerous Mac Apps for One Monthly Subscription Fee,” 25 January 2017). Just as Netflix does with video and Apple Music does with songs, Setapp’s pitch is that $9.99 per month ($120 per year) will be less than you’d spend on buying and upgrading apps individually.

Setapp Numbers — Nearly halfway through Setapp’s first year, it’s time to take a look and see how it’s doing. Most notably, the number of apps available to subscribers has grown from 60 to 77 (from 69 developers), providing users with lots more functionality without sacrificing quality or providing many nearly identical apps. No one would buy all those apps, of course, but if they did, it would cost $2437.

Julia Petryk of MacPaw tells me that Setapp now has 10,000 paying users and another 200,000 people who are using it in the free 30-day trial mode, which can be extended by encouraging a friend to sign up. Those aren’t Apple-level numbers, of course, but they’re respectable for just a few months.

I polled a few developers who are participating in Setapp, and although all of them remain optimistic about Setapp’s potential, Setapp hasn’t contributed significantly to the bottom line for any of them. Joe Japes of Econ Technologies estimated that the inclusion of ChronoSync Express in Setapp had increased revenues by less than 1 percent. Jesse Grosjean of Hog Bay Software told me that putting TaskPaper in Setapp had been a “nice but relatively minor boost” that generated about 5 percent of his monthly revenue.

On the plus side, Grosjean said the income from Setapp was increasing, and Japes noted that “the key for us is Setapp’s potential.” David Sinclair of Dejal Systems said he was quite pleased with Setapp and that Setapp “accounts for a significant chunk of new Dejal Simon customers.” He also pointed out that “Simon is a premium app, at $99, so offering an inexpensive subscription option for it alone makes a lot of sense for Simon users, and they get all those other apps as a bonus.”

Sinclair elaborated further: “I feel I’m making more money since Setapp than before. Some people might have purchased Simon directly instead of getting it via Setapp, but more people are discovering it via Setapp than before. I’ve had some people find Simon via Setapp but choose to buy it directly instead of continuing Setapp, but lots of people seem to prefer the subscription. It’s good to have both options. I think over time the revenue should be about the same for direct sales with paid upgrades every few years, compared to Setapp subscriptions.”

Setapp and App Discovery — The biggest problem Setapp faced initially — apart from simply being a new concept — was that of app discovery. With 60 apps at first, and now 77, how could you even figure out which apps you might want to use to solve a particular problem? In my introductory article, I noted that browsing through the apps listed on Setapp’s Web site was easier than opening each one in turn in the Finder. No longer.

MacPaw’s first swipe at this problem came a few months ago, when Setapp gained a catalog-like interface to separate all the apps into categories and call out those that you’d already installed. Each app received a brief summary and a full description, complete with screenshots.

That was a good step, but finding an appropriate app still took effort, so MacPaw went back to the drawing board and developed a recommendation system, which is rolling out to users now. It provides a My Dashboard entry above the app categories, and in it, recommends apps that you might want to try. The recommendation engine works by comparing the Setapp apps you’ve used against those used by other Setapp users and by finding apps similar to those you’ve already used. Even though it looks only at data within the Setapp ecosystem, the four apps it initially suggested for me were good guesses: 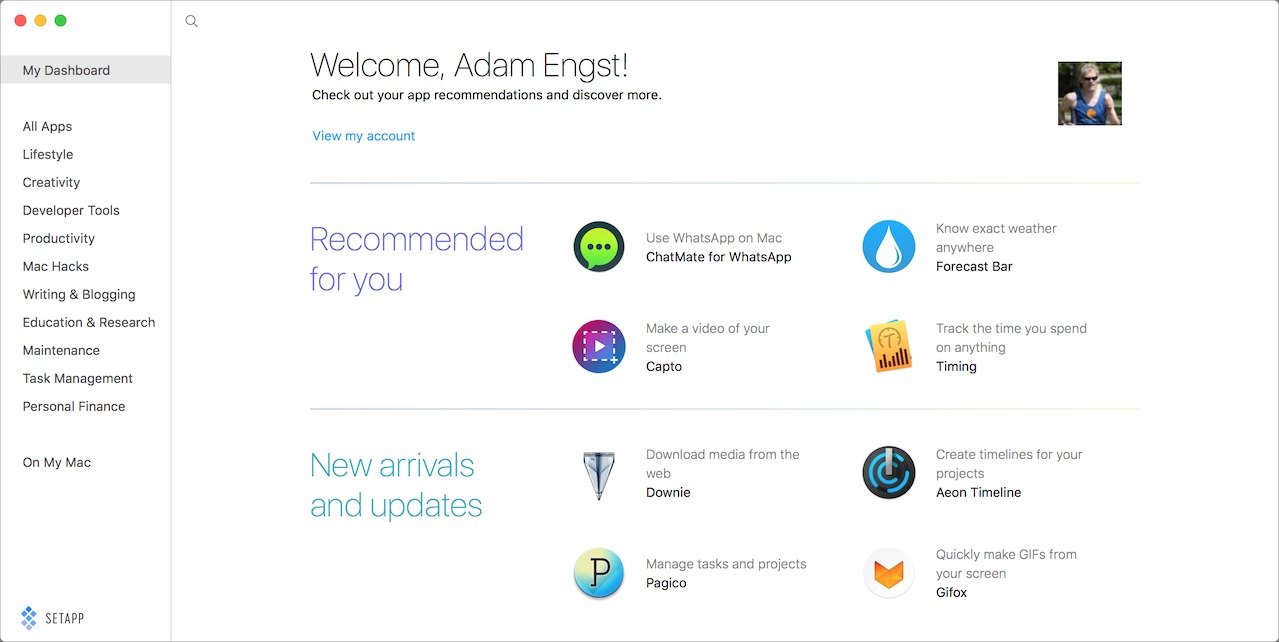 Also on the My Dashboard screen are new arrivals and updates, which help you stay aware of how Setapp’s collection is expanding and improving over time.

Setapp for Users and Developers — Does SetApp make sense for users? It’s a great way to sample a lot of apps, even if you aren’t going to use that many of them in your everyday routine. In fact, I’d suggest that much of the value comes in apps you need to use only infrequently and thus wouldn’t buy. Julia Petryk of MacPaw said that the average Setapp user installs 10 to 12 apps.

For instance, the only app in Setapp I use all the time is iStat Menus because I like its menu bar performance graphs. But I’ve used Gemini to eliminate duplicate files a few times and Permute to convert video files to other formats. At a conference, I saved another speaker’s bacon by using Downie to download a YouTube clip so he could embed it into his Keynote presentation. I checked out iMazing to answer a reader’s questions about extracting SMS text message conversations and voicemails from an
iPhone. I also tried SQLPro Studio but decided that for what I need, the open-source phpMyAdmin is fine.

The beauty of Setapp for users is that it’s entirely optional, so if you feel it offers sufficient value for your $9.99 per month, give it a try. And if you’re not a fan of subscriptions, stick to buying the individual apps you need.

If you’re a developer, should you try to get your app into Setapp? That’s a tougher question. As Joe Japes told me, you have to weigh the pros and cons to make sure that participating in Setapp won’t cannibalize sales. For higher-priced apps, as with Simon, the subscription might bring in enough new users due to the lower price point to make up for the loss in direct revenues. And it’s a way that you could add a subscription option without having to roll the technology yourself.

Remember, though, that MacPaw curates the collection. David Sinclair said, “I would definitely encourage other developers to consider signing up for Setapp, though MacPaw is very selective of the apps they accept, which is great for users, but can be frustrating for developers.”

Other SetApp developers with similarly low revenue increases expressed the worry that, as MacPaw brings additional compelling apps to Setapp, the per-user payout will have to be split between more developers.

So that’s a tension, then. From the user perspective, you want to take advantage of as many apps as you can to ensure you’re extracting the most value from your subscription. Each developer participating in Setapp, however, would prefer that you use their app and as few others as possible, so the revenues are shared between only a few developers. And MacPaw is in the middle, wanting both to bolster Setapp’s perceived value to users by adding more apps and to keep developers happy by increasing revenues.

No one ever said that rethinking an entire business model would be easy.

Comments About Setapp At 5 Months: 10,000 Users and Better App Discovery