Reporting on its Q3 2017 financial results, Apple has announced net profits of $8.7 billion ($1.67 per diluted share) on revenues of $45.4 billion. The company’s revenues are up 7 percent compared to the year-ago quarter, and earnings per share are up 17 percent (see “Apple Beats Expectations in Q3 2016, but Slump Continues,” 26 July 2016). Apple currently maintains a cash hoard of $261.5 billion — to put that in perspective, the company’s cash on hand could pay for California’s entire state budget with more than $80 billion to spare.

Apple saw revenue growth across all of its businesses, especially the Other Products category, which posted a 23 percent year-over-year increase, bringing in over $2.7 billion. That category includes products like AirPods, Apple TV, Apple Watch, Beats products, iPods, and various accessories.

Apple Watch sales increased by 50 percent for the quarter, despite the common impression among pundits that the product line is a disappointment, and Apple CEO Tim Cook said that it is by far the best-selling smartwatch in the world. Furthermore, the new wireless AirPods seem to be particularly popular with customers, having achieved a 98 percent customer satisfaction rating — Apple still can’t manufacture enough to meet customer demand. 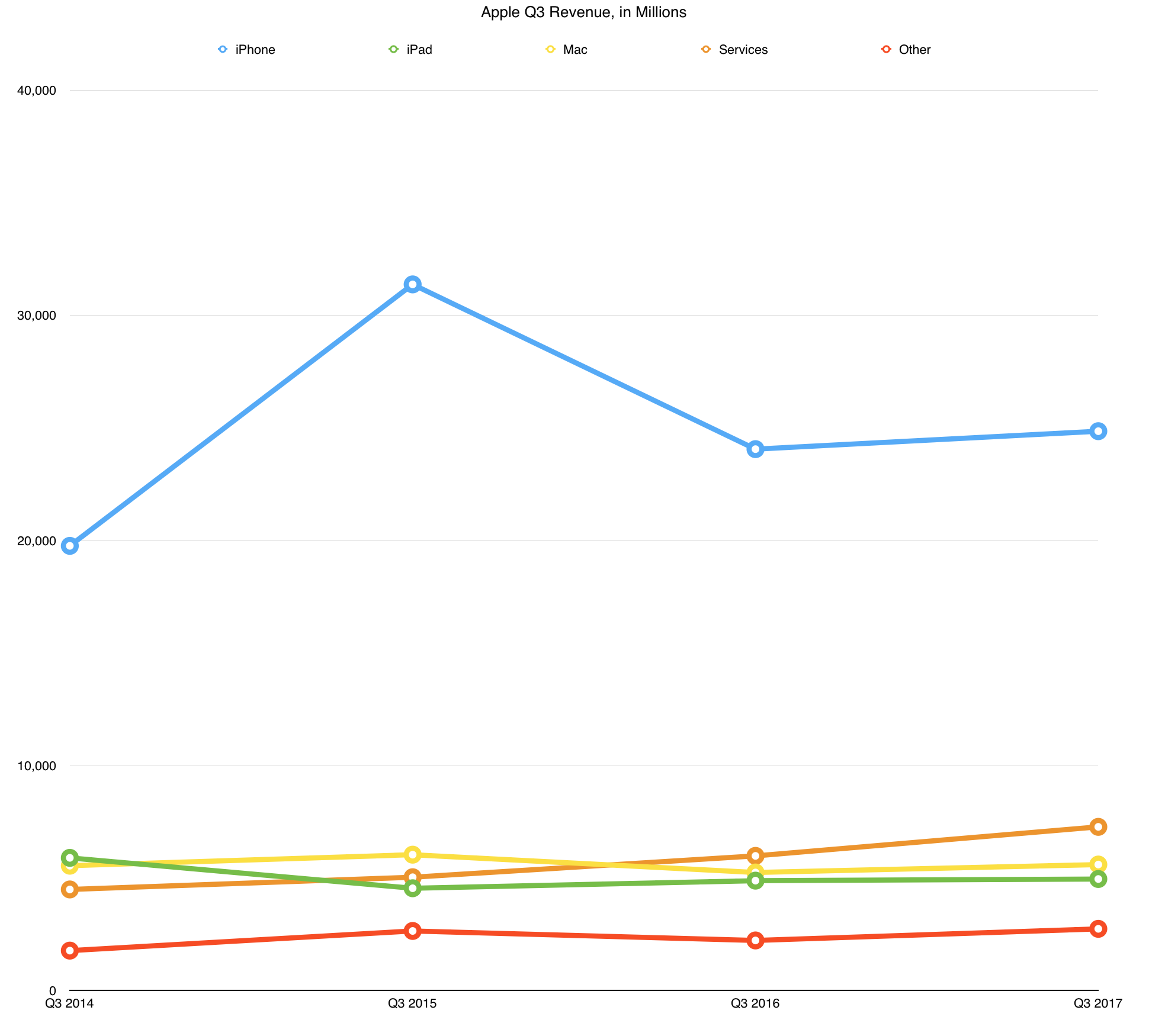 The company’s Services business shone particularly brightly in the quarter, bringing in nearly $7.3 billion and setting an all-time quarterly revenue record for that category. That’s a 22 percent year-over-year increase. Services is now “the size of a Fortune 100 company,” Cook remarked. CFO Luca Maestri noted that the App Store, the largest component of the Services business, “is seeing an increasingly large number of paying accounts.”

Maestri said that one reason for this growth is that new payment options, such as Apple Pay, make it increasingly easy for global customers to make purchases. He also pointed out that both Apple Music and iCloud storage subscriptions continue to grow and said that those two services now have 185 million paid subscriptions, a surge of almost 20 million over past 90 days. As for the brick-and-mortar portion of the Services business, Apple now boasts 497 Apple Stores worldwide, raising the question of where the 500th store will be located.

iPad sales finally experienced a turnaround, with a 15 percent year-over-year increase in units sold, bringing in about $5 billion in revenue. While the product’s 2 percent year-over-year revenue rise isn’t impressive, it reverses the long-running decline in iPad revenue numbers and represents a 28 percent leap in both revenue and units sold over the last quarter.

iPads garnered 89 percent of sales in the over-$200 tablet market and achieved a 32 percent unit growth rate in the education market. Given the difference between the increase in units sold and revenue, it’s likely that the iPad’s revenue gains are due more to the inexpensive $329 fifth-generation iPad than the pricier iPad Pro line.

Mac sales were solid, scoring a 7 percent year-over-year increase in revenue and earning Apple $5.6 billion, even though that product line achieved only a 1 percent increase in units sold compared to the year-ago quarter. On the other hand, despite a contraction of the global PC market, Mac sales did grow. A higher average selling price appears to be helping Apple make up for slowing Mac sales.

Last but not quite least, the iPhone product line experienced the lowest overall growth among the company’s business segments, with only a 2 percent increase in units sold and a 3 percent increase in revenue year over year. Nevertheless, the iPhone remains Apple’s largest business by far, bringing in $24.8 billion this quarter. According to Apple, demand was strongest at the high end of the product line.

Apple has declared a dividend of $0.63 per share — a 10.5 percent jump — which will be paid on 17 August 2017 to those who owned shares at the close of business on 14 August 2017. Apple also announced a $50 billion increase to its capital return program and is boosting its share repurchase program from $175 to $210 billion. To date, the capital return program has returned over $211 billion to shareholders.

While Apple isn’t quite the growth rocket that it was a few years ago, it’s proving that it can maintain a steady rise in revenues and profits. After a distressing Q4 2016 (see “Despite $9 Billion Profit, Apple Revenues Slump Again in Q4 2016,” 25 October 2016), the company has seen a return to growth throughout the 2017 fiscal year, even well beyond the holiday season.

2017 Financials Apple Financials Apple Inc. Q3 Financials Tech News
Cookies & Privacy: We wish we were talking about chocolate-chip cookies here, but our Web site—like nearly all others—relies on a few minor digital cookies. Various laws around the world require us to tell you that fact, so consider yourself informed, if not nourished. By continuing to use this site, you agree to our use of these cookies. Cookie and Privacy Notice