Reporting on its fourth quarter 2017 financial results, Apple has announced a net profit of $10.71 billion ($2.07 per diluted share) on revenues of $52.6 billion. The company’s revenues were up 12 percent compared to the year-ago quarter (see “Despite $9 Billion Profit, Apple Revenues Slump Again in Q4 2016,” 25 October 2016). Revenues were also higher than in Apple’s record-setting Q4 in 2015, which saw $51.5 billion come in, but the company’s $11.1 billion in profit that year bested this year’s number. Once again, Apple will be issuing a dividend of $0.63 per share to investors. 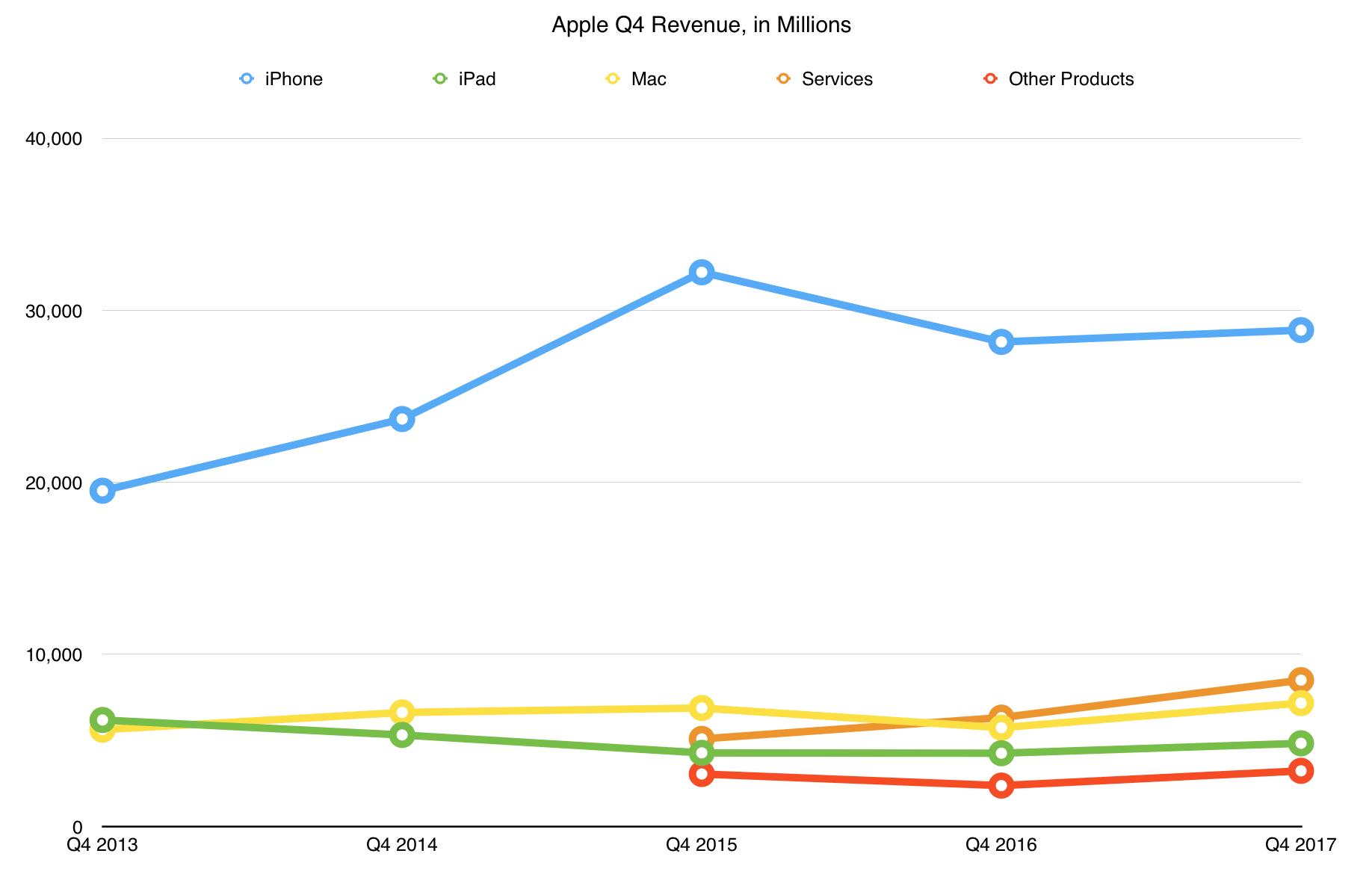 iPhones sales continued growing, albeit not in rocket-sled fashion. Unit sales were up only 3 percent from a year ago, with 46.7 million iPhones sold this quarter compared to 45.5 million in the year-ago quarter. The iPhone accounted for $28.8 billion in revenues, fueled by the introduction of the new iPhone 8 models and a rebound in sales in China.

Although Apple never splits out sales by individual model, CEO Tim Cook said that the iPhone 8 is the most popular new iPhone to date and that the iPhone 8 Plus got off to the fastest start of any Plus model. Despite doom and gloom in the clickbait media, the later release of the iPhone X seems not to have hurt Apple’s iPhone numbers significantly. We expect that the iPhone X will boost Apple’s revenues even further next quarter.

The iPad continued its return to sales growth as well, with 10.3 million units sold last quarter, beating the year-ago sales numbers by 11 percent. That’s down only slightly from the 11.4 million sold last quarter, during which Apple introduced new models of the iPad Pro. Nonetheless, the iPad still contributed $4.8 billion to Apple’s revenues.

Despite the iPad’s improved showing, the Mac continues to outshine it both in terms of sales growth and contributions to Apple’s bottom line, thanks largely to the MacBook Pro. In Q4 2017, Apple sold 5.4 million Macs, bringing in $7.2 billion, a year-over-year unit sales increase of 10 percent. Apple must also be improving its margins because the associated revenue increase was a whopping 25 percent and up 28 percent from the previous quarter. Cook said that 2017 was the best year ever for the Mac.

Services and software continue to burn brightly in Apple’s universe, bringing in a record $8.5 billion last quarter, and outshining last year’s revenues by an incandescent 34 percent. Apple’s music business has “turned the corner,” according to CFO Luca Maestri, and iCloud revenues grew by double digits.

Finally, the grab-bag Other Products category tallied $3.2 billion in revenue last quarter, a 36 percent increase from last year’s take. Other Products includes the AirPods, Apple Watch, Apple TV, iPod touch, Beats headphones, and all other Apple-branded and third-party accessories. We’re betting that this increase comes primarily from the popular AirPods and the new Apple Watch Series 3. Cook said the Apple Watch posted unit sales growth of over 50 percent for the third consecutive quarter.

Almost two-thirds of Apple’s sales, 62 percent, came from outside the United States. The biggest year-over-year increases were in Europe, sales up 20 percent. Sales rose in Greater China by 12 percent and by 5 percent in Asia Pacific. However, Apple did see an 11 percent decline in sales in Japan.

In short, Apple had an unsurprisingly good quarter and its fortunes seem on track to continue rolling happily along into the coming holiday quarter — Cook suggested that it will be Apple’s “best holiday season yet.”

2017 Financials Apple Financials Apple Inc. Q4 Financials Tech News
Cookies & Privacy: We wish we were talking about chocolate-chip cookies here, but our Web site—like nearly all others—relies on a few minor digital cookies. Various laws around the world require us to tell you that fact, so consider yourself informed, if not nourished. By continuing to use this site, you agree to our use of these cookies. Cookie and Privacy Notice