Not long ago, Tonya asked on Facebook what problems people were having with their Macs. She was hoping to gather questions from a cross-section of users to inform a webinar she’ll be doing for readers of her “Take Control of Mac Basics” book soon (see “Free Webinar for Readers of “Take Control of Mac Basics”,” 5 February 2018). The ensuing conversation spiraled off in numerous directions as various friends and family members griped, kibitzed, and tried to solve each other’s problems. It was fascinating because many of these people were long-time Mac users who had been blindsided by an interface change along
the way, and who had thus been frustrated by their Macs ever since.

Based on this experience, we’re starting a new TidBITS column, called Bad Apple. Read that name however you like — in the context of one bad apple spoiling the whole barrel or like the imperative “Bad dog!” In Bad Apple, we’ll dive into a particular aspect of something specific that Apple got wrong. Please send me your suggestions for future columns — I’m looking for user-interface or user-experience mistakes that can be described and reproduced reliably, not one-off bugs or general complaints about iTunes. As always, our goal is to provide constructive criticism. We’re not interested in whining; we’d like to see Apple
address these problems.

For our first edition of Bad Apple, I’d like to introduce an “expected behavior” with iCloud Photo Library that Apple should change. Here’s the story.

I was seeing some strange problems on my 27-inch iMac running macOS 10.13.3 High Sierra. Messages wasn’t getting or sending messages, Wi-Fi calling wasn’t working, and after upgrading to 10.13.3, I was unable to enable auto-unlock with my Apple Watch. To solve these problems, I turned iCloud off and back on. Despite the iCloud preference pane throwing an ominous error, the problems did indeed disappear.

However, there’s a nasty side effect of turning iCloud off and back on: iCloud Photo Library needs to re-upload all your photos. It does this in order to compare the library’s contents to the synchronization “truth” at iCloud. Fair enough, except that this process can take days, depending on the size of your Photos library and the speed of your Internet connection. Bad Apple! We don’t see that sort of poor performance with Dropbox or Google Drive, and this behavior is both unnecessary and driving people away
from iCloud Photo Library.

It turns out that there are quite a few actions that can cause your entire Photos library to be re-uploaded to iCloud, one of which I knew already (see “More Problems with iCloud Photo Library Uploads,” 19 June 2015):

I’m not convinced that these actions actually re-upload everything, since it goes faster than my initial iCloud Photo Library upload. It’s nearly impossible to test such a hypothesis, and even Apple uses the term “re-upload.” However, it’s also not impacting my Mac or Internet performance as badly it did back in 2015 when I did my first upload (see “How to Throttle iCloud Photo Library Uploads,” 20 May 2015). In the end, it took less (possibly much less, since it finished while I was sleeping) than 18 hours to “re-upload” 113 GB over a 6 Mbps upstream link. That amount of raw data should have taken nearly 45 hours to upload at full throttle.

It’s bad enough that Photos wants to upload every photo to iCloud Photo Library again, but here’s the scenario that triggered this article. When I tried to turn iCloud Photo Library on again, I was told that I didn’t have enough space: my 200 GB iCloud storage plan had only 56 GB free, but my Photos library contained 113 GB of photos. All that was true, except for the fact that the reason my iCloud account was so full was because it already held every one of those photos! Every time I clicked Continue to acknowledge that I realized this fact, Photos turned iCloud Photo Library off again.

I decided to be pig-headed about this problem — there was no reason I could see why iCloud Photo Library didn’t understand that it already held all my photos — so I contacted Apple. That experience warrants another article, but to make a long story short, after troubleshooting with Steve, a Photos support expert, for 90 minutes, he finally went off to check with even higher-level support. After a few minutes, he came back, incredulous, and told me that what I was seeing was “expected behavior” and that I should upgrade to a 2 TB plan temporarily. If I downgraded within 2 weeks, he said, I wouldn’t be charged.

We’d had some time to chat while I did things like boot into Safe Mode, and I had asked Steve how long he had been supporting Photos. “Seven years,” he said. So to sum up, a wide variety of common actions can create a situation where the recommended solution is to sign up for an unnecessary storage plan and then cancel it later? The interface gives no hint that this is necessary, and a Photos support expert who had been working in that group for years was equally as shocked as I was? Bad Apple!

One final thought about this workaround, for photography buffs who have massive Photos libraries. What if your library is larger than 1 TB? There is no iCloud storage level beyond 2 TB, so you’d be forced to work around the problem by creating a new Photos library and setting that to be your System Photo Library.

Later, Steve sent me a link to a couple of pages that explained the situation. Oddly, these weren’t official Apple support pages but were instead user tips in the Apple Support Communities by a user named Léonie. They were good explanations, but I’ll award another “Bad Apple!” for Apple pawning the task of describing “expected behavior” off on a user tip, rather than providing official documentation.

After I walked through the steps to upgrade my iCloud storage account to 2 TB, I was presented with an interesting dialog I hadn’t seen before. It summarized my iCloud storage situation and seemingly let me delete data from iCloud. That was extremely scary, so I just clicked Done and moved on. 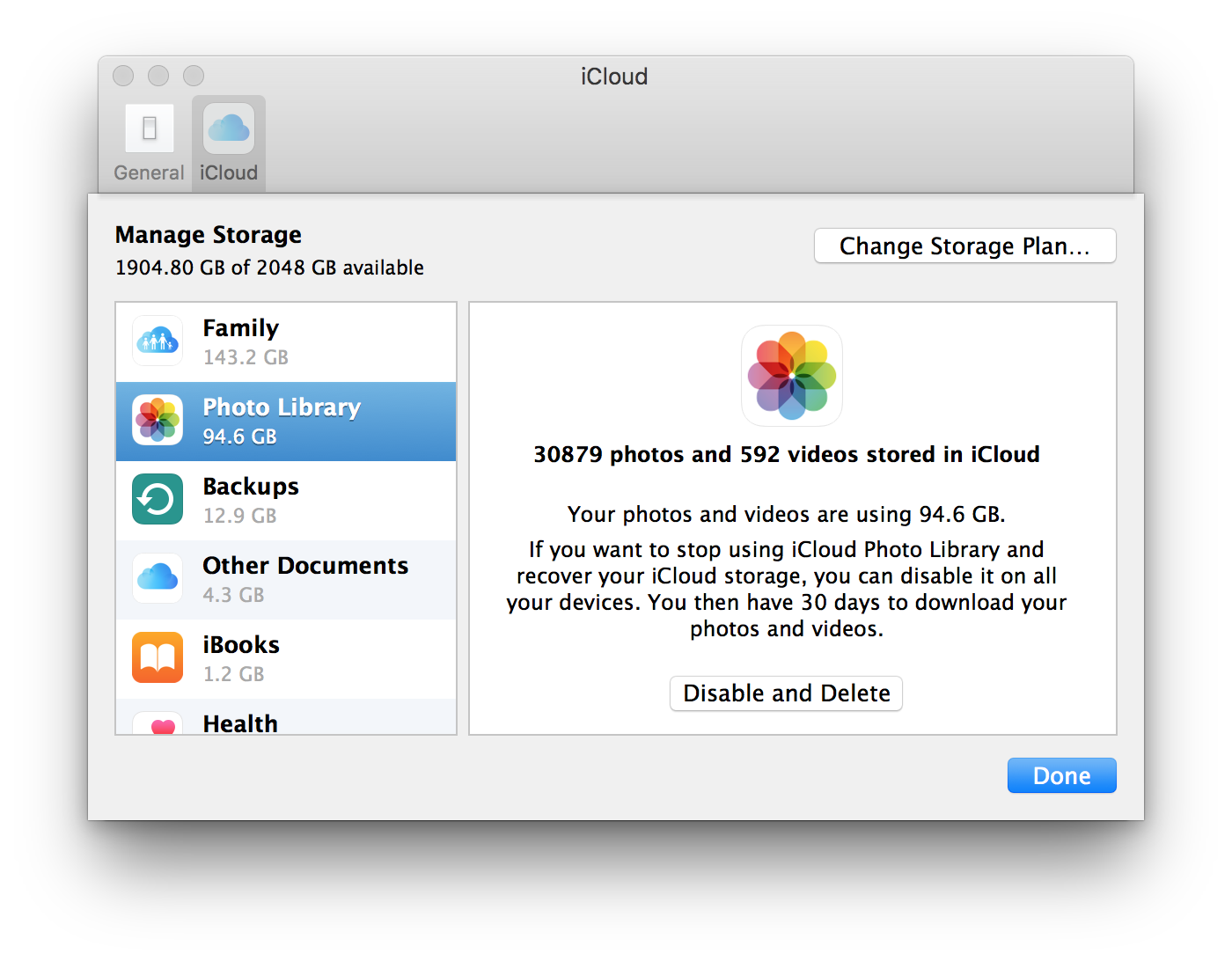 Photos immediately started re-uploading my photos and videos, and I’ll ignore the fact that none of the numbers that Photos reports in various places seem to agree with one another. Wait, no, I won’t. Bad Apple! Why should Photos say at one point that my library is 113.03 GB, and then 94.6 GB at another? And do I have 30,875 photos, 30,879 photos, or some larger number that caused the iCloud progress count at the bottom of the Photos screen to report that it had 33,726 items to go, even though adding the number of
photos and videos together never results in a number higher than 31,471. Come on, Apple, this is basic math, and discrepancies like this reduce user confidence. Be consistent!

When Photos finished re-uploading, I immediately downgraded my iCloud storage plan back to 200 GB. To do that, I opened System Preferences > iCloud, clicked the Manage button, clicked Change Storage Plan, clicked Downgrade Options, selected the 200 GB plan, and clicked Done. I hoped there wouldn’t be an additional charge for the 24 hours I was on the 2 TB plan, but I didn’t think I’d know that for a month.

In fact, a couple of days later, I got an invoice from Apple for the 2 TB storage plan for $7.87. Not a lot of money, certainly, but it is simply wrong for Apple to charge a customer to resolve a problem caused by bad design and “expected behavior.” 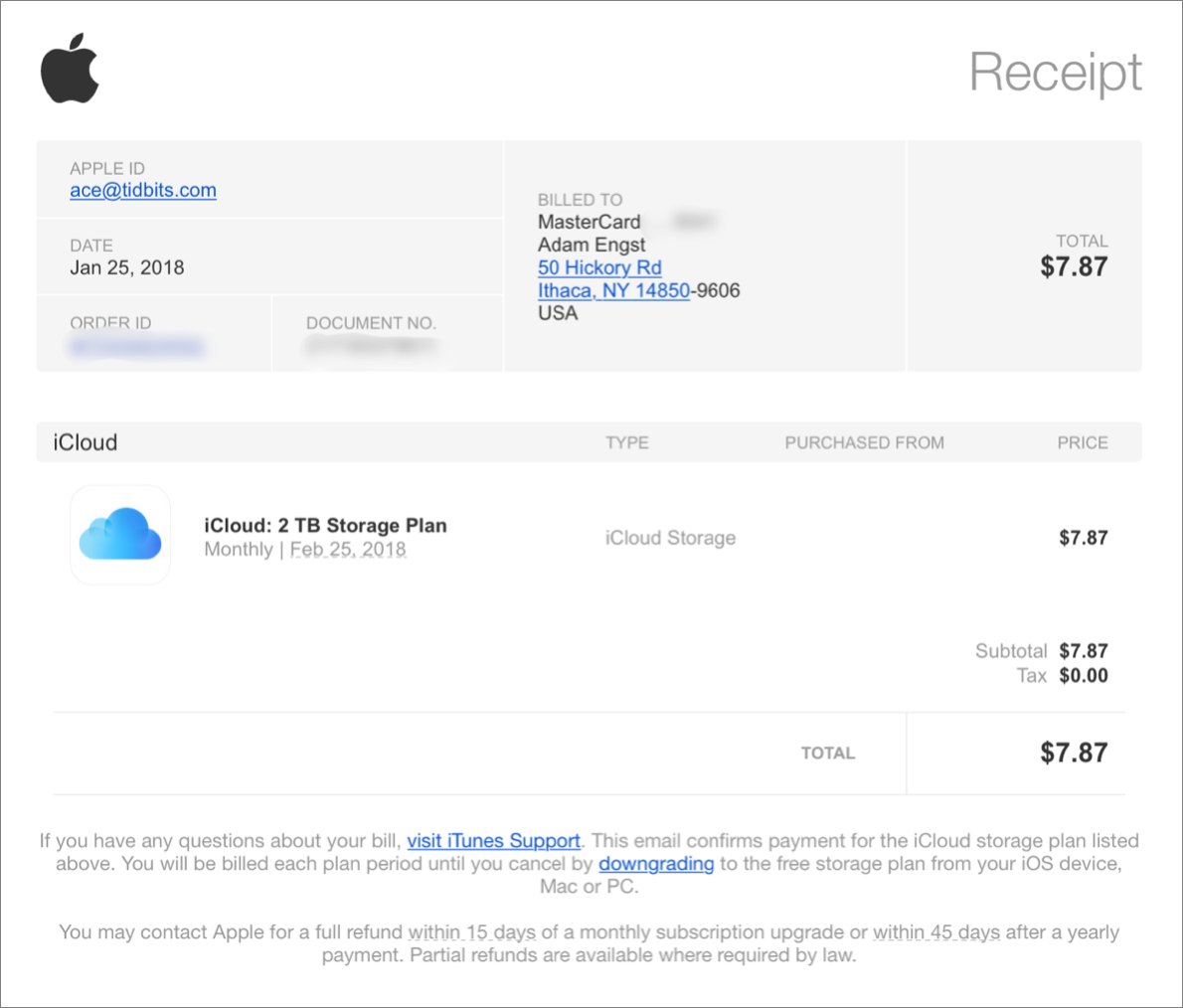 So I hunted down the email I’d received from Apple with my case number, clicked it to reopen the case, and decided to try the chat since I didn’t want to have a long conversation. The woman on the chat was nice, but she had to escalate the problem to iCloud support via the phone since she couldn’t reverse charges. After waiting on hold for a while, I had to explain the situation to another woman and wait on hold again before finally being escalated again to a senior advisor, Shea Marie. Who knew this would be so hard?

There I told my story one more time, explained that the charges for the 2 TB account needed to be reversed, and clarified for Shea Marie that it really was $7.87 and not $6.99 plus tax. To reverse the charges, she had to cancel my iCloud storage entirely, causing me to receive an alarming email and notification from iCloud that my free 5 GB of storage was full. Then I had to “upgrade” again to the 200 GB plan I had started with.

The only problem was that I had previously had about 56 GB free, but after all this, I had 85 GB free, which seemed wrong. Shea Marie thought the problem was the family sharing storage that Tonya and Tristan use, and that it would catch up shortly. It didn’t right away, but after the call, when I went into System Preferences > iCloud > Manage Family > My Apps & Services > iCloud Storage, it was clear that I needed to click Start Sharing again to get the storage to share properly.

After another hour of support, I was back to where I was before I turned iCloud off and back on. That was necessary, but I had no idea it would involve 2.5 hours of work with Apple and 18 hours of re-uploading — at least I don’t have a data cap or per-byte charges, as do some TidBITS readers!

Do you have a concrete idea for a future Bad Apple column? For instance, why are the options for Apple’s apps in iOS’s Settings app not organized alphabetically? Some are grouped sensibly, but others are just random. I’ll dive into that soon, but if you have similar observations or complaints, send them to me at [email protected].