Welcome back to my Bad Apple column, in which I chastise Apple — constructively! — for poor decisions that are easily changed. TidBITS readers have sent me lots of suggestions for this column, and for that, thank you! For those who are sharing personal horror stories, my condolences, and I’ll try to help, but for Bad Apple, I want to focus on problems that any Apple user could encounter, not things that are specific to a particular account or machine.

This time around, I want to look at the Settings app in iOS, which has become a morass of muddlement. It doesn’t help that Apple seemingly reorganizes it with nearly every major release of iOS, sometimes even within minor releases. For instance, the relatively new settings item at the very top of the Settings app, which combines options for Apple ID, iCloud, iTunes & App Store, and Device Info all in one is seemingly helpful, but it’s devilishly hard to write about, since it’s named for the user, not for what’s inside. 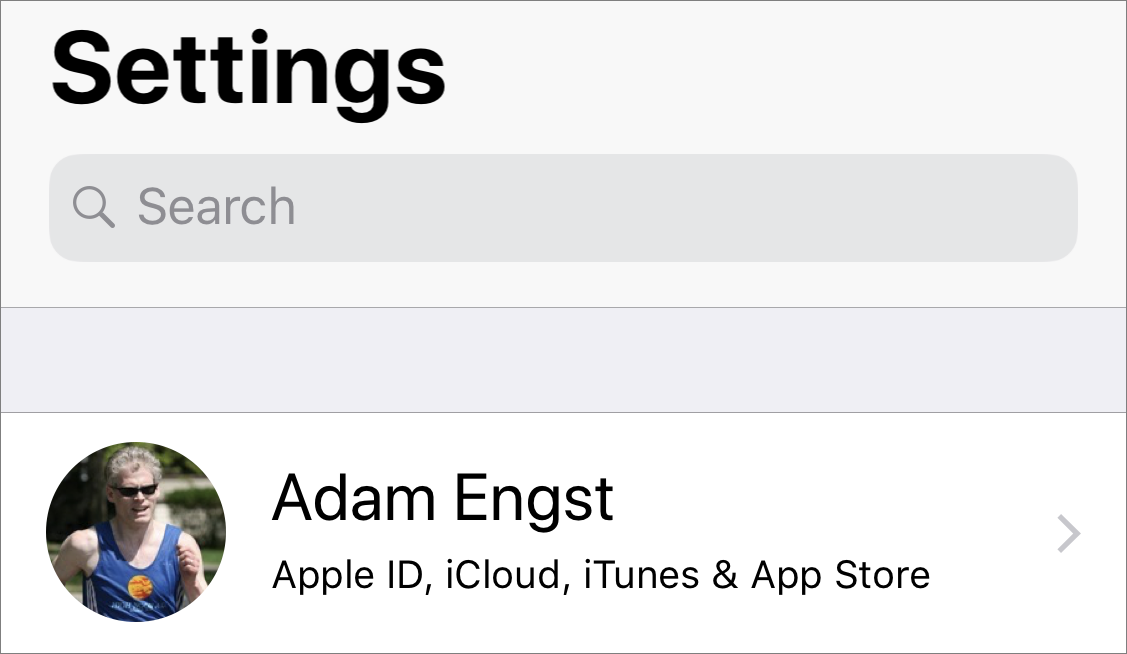 But my gripe with Apple isn’t about this new personal settings item’s name; it’s about what it represents, or how Apple tries to group items in the Settings app by function and relationship, making it difficult even for experienced users to scroll to the right spot in Settings. Apple may have a rationale for its groupings, but it’s not obvious to anyone outside Apple. All too often, I give up trying to tap my way through Settings and instead pull down to reveal the Search field, before being reminded that searches in Settings often fail.

Apple’s grouping approach isn’t completely irrational, but it assumes a great deal more familiarity with the Settings app — and with iOS in general — than nearly any user has. It’s worse even than the System Preferences app in macOS, which at least shows all preference panes without the need to scroll. In fact, System Preferences points to the simple way Apple could rearrange the Settings app to make it easier to navigate.

Did you know that when System Preferences is the frontmost app on the Mac, you can go to the menu bar and choose View > Organize Alphabetically? No more hunting for Accessibility in the bottom-right corner, or wishing that so many of the icons weren’t blue blobs. System Preferences still displays its icons in a grid, making the alphabetical organization a bit less useful than it would be in a linear list, but you can return to the View menu for that. (Remember, if you’re reading on the TidBITS Web site, click any image to expand it.)

So why doesn’t Apple provide a similar alphabetical organization within iOS’s Settings app? (Yes, I realize alphabetization would vary by language, but that’s a solved problem.) Some functional groupings could remain, but within each grouping, rather than Apple grasping at logical straws that few users understand, why not just organize everything alphabetically? And why doesn’t each collection at least have a label that would give the user a hint as to the connection between the various
settings? Bad Apple!

(As an aside, if you want even more evidence that Settings has spun out of control, look no further than the mindmap that Allison Sheridan created of all the settings in iOS 11. If I’m calculating correctly from her Markdown version, Settings has over 1200 items total!)

Let’s consider the possibilities of what the main screen of Settings could look like. (These screenshots all come from iOS 11.2.6, running on an iPhone X. You may see slight differences on other devices and iOS versions.)

Networking — I’ll start at the top, with what I call Networking. As it stands, Airplane Mode is the first setting after the personal settings collection. That’s presumably for ease of access for business travelers who fly weekly, though the vast majority of iOS users probably touch it at most once or twice a year. But whatever; it starts with A, so we can leave it there. After that, Apple has Wi-Fi above Bluetooth, perhaps because people access Wi-Fi settings more often? And then Cellular comes before Personal Hotspot, which is slightly sensible under the assumption that Personal Hotspot is subordinate to Cellular. In fact, Personal Hotspot is duplicated within the Cellular settings.

This group of settings isn’t hard to parse — there are only five — but is it any harder to parse if they’re simply listed alphabetically, as in the right-hand screenshot below? I think not.

Frankly, I believe this grouping should disappear, with its items merged into the next group, but in the assumption that there’s a good reason for lumping these items together, let’s take it alphabetical. At least that puts Do Not Disturb and Notifications next to each other, which wasn’t even true before.

System — The next group looks like a grab-bag, but when you scrutinize it, you realize that it’s basically all the settings for iOS and your device’s hardware. The problem is that it’s almost entirely random. Having General come first makes some sense, I guess, since it’s, well, the most general. Display & Brightness and Wallpaper are conceptually somewhat related, but after that, there is no apparent organization at all, forcing you to absorb the entire list to pull out a particular item. Bad Apple!

When I alphabetize the group, Battery comes first, which is a nice side effect, since it’s a commonly used option by anyone with an older device. After that, the alphabetical order just makes it easier to jump directly to the item you want. And I see no reason Control Center, Do Not Disturb, and Notifications wouldn’t fit in here.

This isn’t the place to get into details, but General is itself a mishmash. What’s the rationale for putting things like Accessibility, Keyboard, and Software Update in General? Or maybe Display & Brightness and Wallpaper should be inside General? Who knows!

Stores & Payments — The next group has only two options and they’re already alphabetized, so the only change I’ve made is to add a label that clarifies why they’re together.

Core Apps — This next grouping has a good deal of logic behind it, but not enough to leave it alone. Accounts & Passwords feels out of place and isn’t itself an app, but it’s where you configure the accounts for Mail, Contacts, Calendar, Notes, and Reminders. Weirdly, Apple did not duplicate the account settings inside each of those subsequent settings screens, so if you’re just looking for your mail account, you won’t find it in Mail. The other reason those three go together is that, long ago, they were a single entry called “Mail, Contacts, Calendar.” But if you didn’t remember that, or know it to start, the grouping may feel arbitrary. That said, Notes and Reminders feel related, as do Phone, Messages, and FaceTime. There’s even an argument for why Maps and Compass are next to each other, even though hardly anyone uses Compass (and its only setting is Use True North). But then why are Safari and News shoved down to the bottom?

Regardless of whether or not there are some internal sets within this collection that make sense, taken as a whole, it’s random and difficult to navigate, especially if you’re looking for Safari or News. You have to read every item in the list every time you look at it. Contrast that with a simple alphabetical sort. It loses any logical grouping, but you know exactly where you are in the list and what’s coming next as you read. 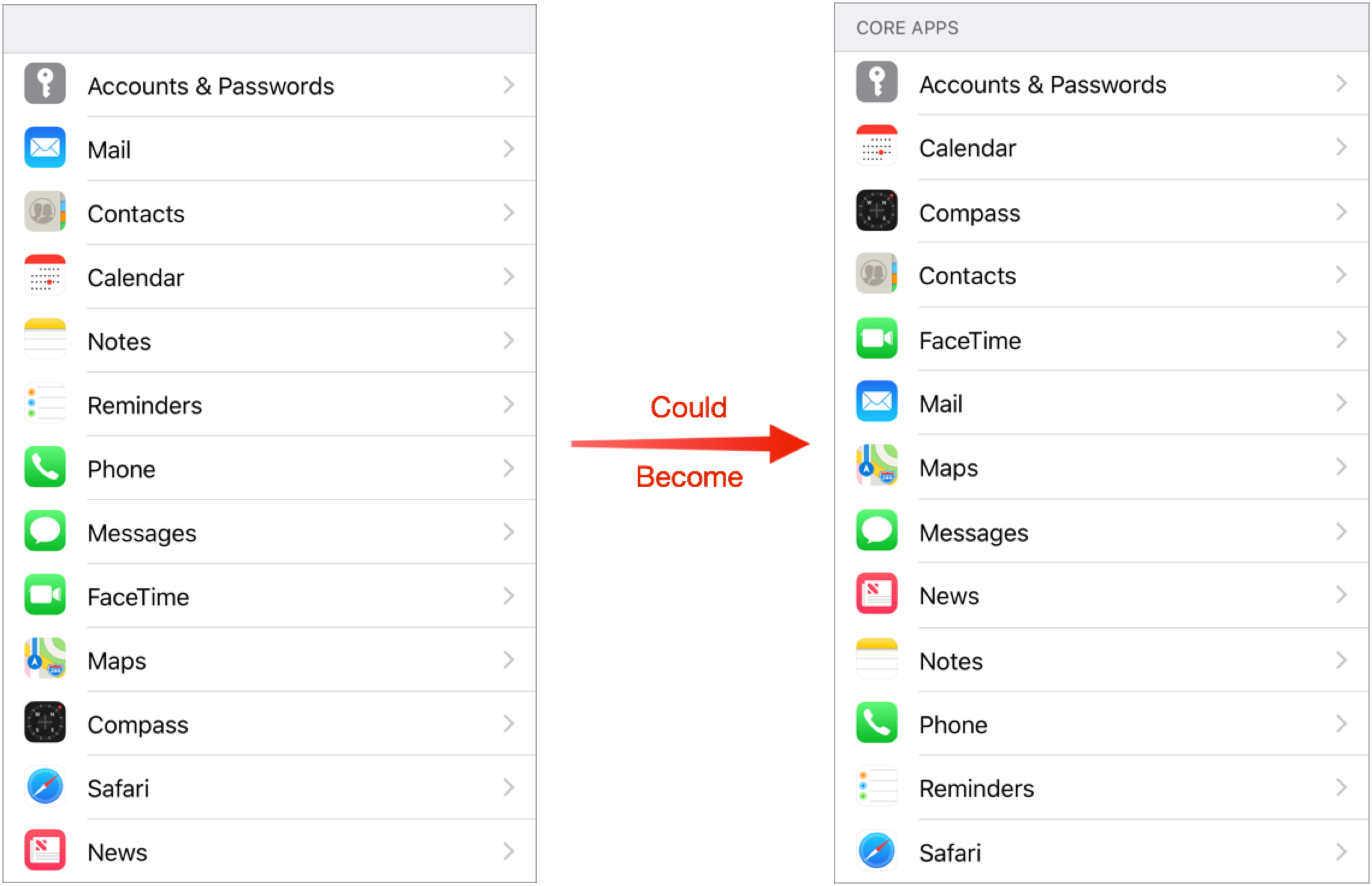 Media — The final Apple-provided collection of settings is clearly related to media. Or rather, it would be the final collection except for Apple’s inexplicable decision to emphasize TV Provider by putting it in a group by itself. Bad Apple! As best I can guess, Apple is arranging these in perceived order of importance, with Music and TV at the top and iTunes U and Game Center at the bottom.

But since not everyone views the world in the same way, it’s far more sensibly arranged alphabetically, with TV Provider lumped in. No, TV Provider isn’t an app like the rest, but there’s no good reason to break it out. After all, Apple lumped Accounts & Passwords in with the core apps above because it controls settings common to several. TV Provider is similar, in that it provides a setting that other media apps would use. And it’s still at the bottom, right next to TV.

A Is for Apple — A few closing thoughts. Suggesting that Apple alphabetize more of the contents of the Settings app shouldn’t be a radical proposal. After all, once you scroll past the Media settings, you get to the options for third-party apps you’ve installed, which, you’ll notice, are listed alphabetically! Similarly, whenever you see any other list of installed apps, such as in the Cellular Data, Notification Style, or Search & Siri Suggestions lists, they’re alphabetical. Nothing else makes sense.

But whenever Apple provides a list of its own apps or services, it throws them together in one of these inscrutable hodgepodges. Just look at the lists in Apps Using iCloud or in Privacy — if they’re not random, the organization scheme is so unintuitive that it may as well be random. 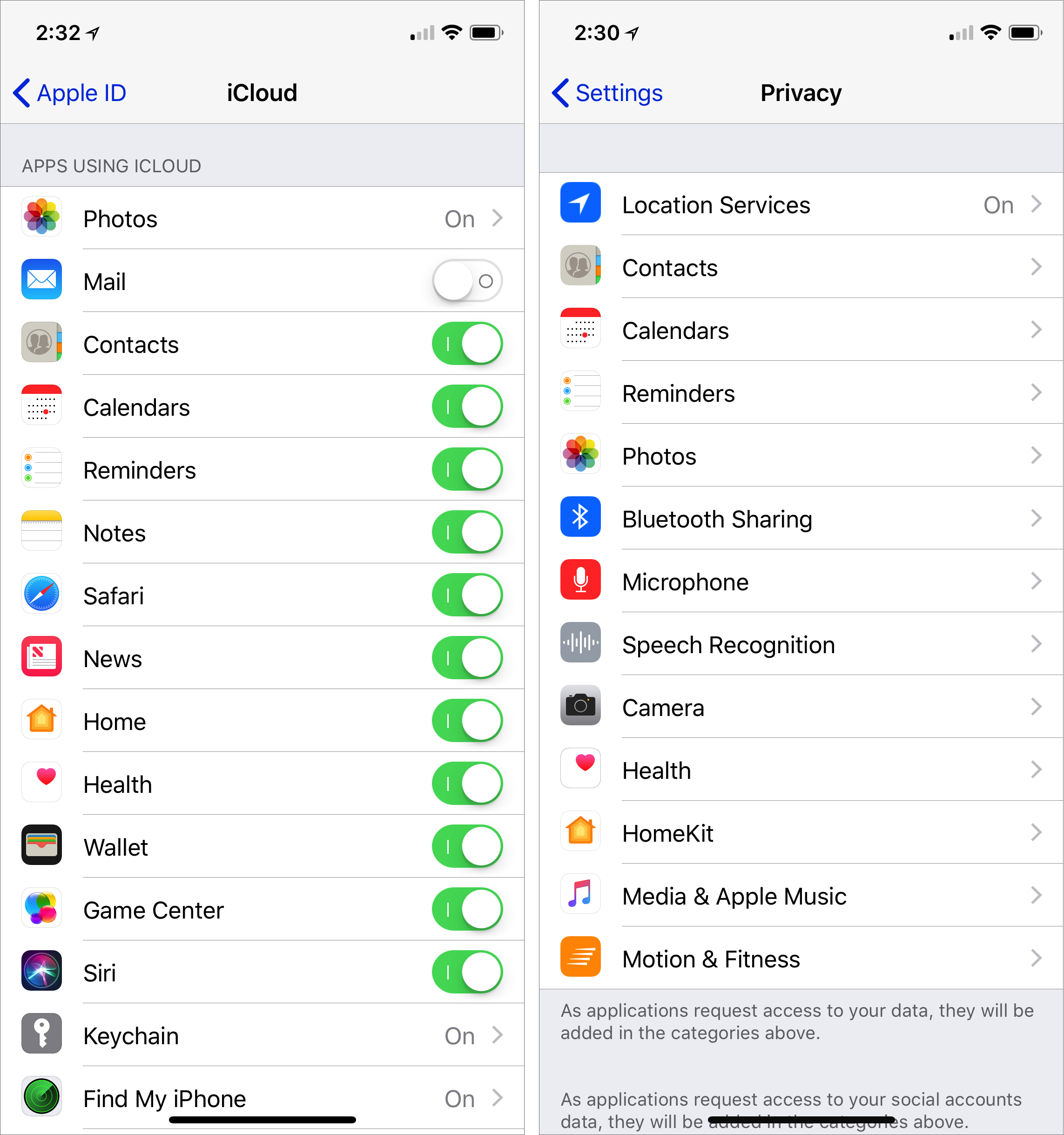 Don’t get me wrong. I’m not suggesting that Apple alphabetize everything slavishly. For lists of five or fewer items, you can take in all the items in one gulp and see the one you need. In some cases, such as Navigation Voice Volume, there are other approaches (low to high) that make much more sense (left, below). But for longer lists without such an obvious organizational scheme, such as the Vision settings in Settings > General > Accessibility (right, below), why not alphabetize them? Seems like that would be more accessible for all of us. 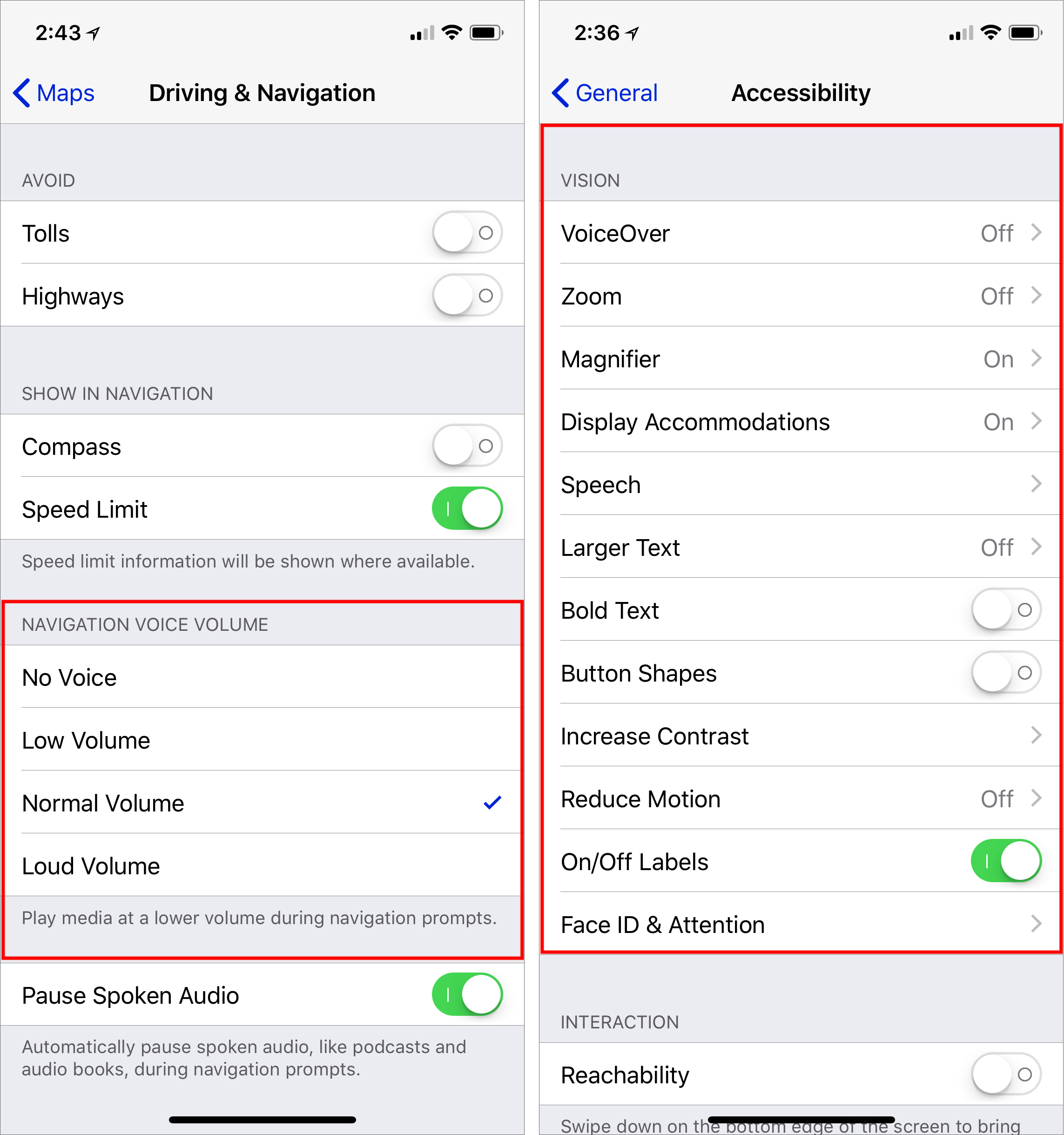