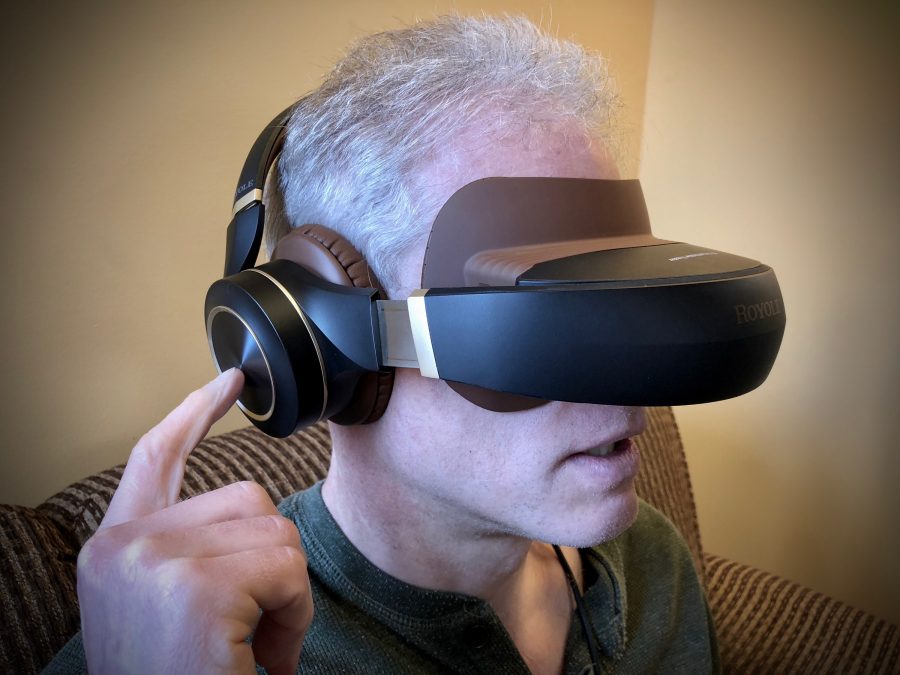 In the movie Ready Player One, people use virtual reality headsets and haptic feedback clothing to inhabit a virtual world called the OASIS. Both the film and the New York Times best-selling book upon which it’s based are great, and I recommend them highly. But throughout the movie, whenever I saw someone wearing a VR headset with anyone else around, all I could think was how horribly vulnerable I’d feel to have my sight and hearing cut off from the outside world. 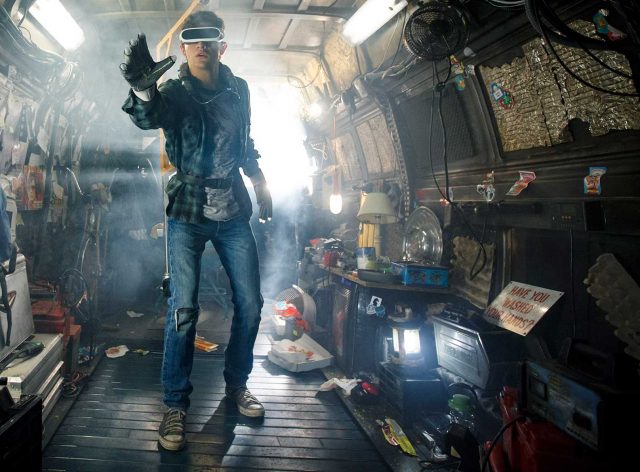 That’s both the promise and the curse of the Royole Moon, an $800 “3D mobile theater” that couples a head-mounted display with headphones. It promises to provide a “truly immersive, 3D movie watching or gaming experience that could be enjoyed anytime and anywhere.” Technically, it meets that goal, but in real-world usage, I couldn’t bring myself to use it outside the house or even when Tonya was in the room with me. Maybe I’m too self-conscious, or just too old, to judge from the dude that Royole has modeling the Moon below. 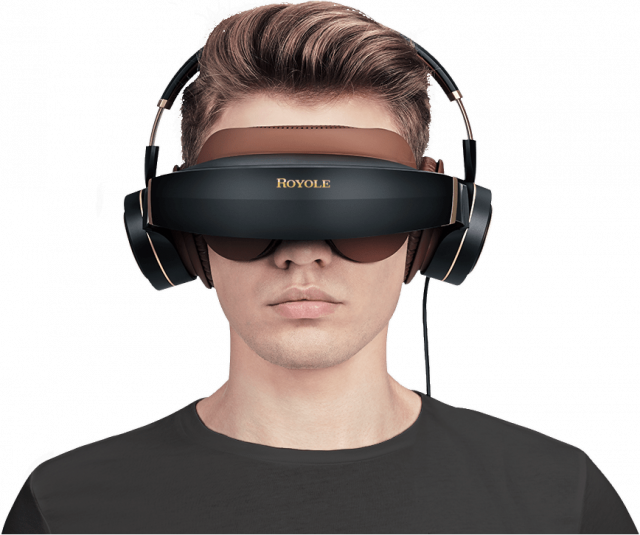 The Moon’s headset employs dual 1080p AMOLED displays to simulate an 800-inch curved screen viewed from 20 meters away. They also provide 3D capabilities when used to show appropriate content—you can find some on YouTube. Royole claims the 1920-by-1080-pixel screens simulate 3000 pixels per inch and have a 60 Hz refresh rate. You can adjust the lenses to provide from -7.0 to +2.0 diopters, which means that most people can use it with or without corrective lenses, which is good, since you can’t wear glasses with it.

That sounds impressive, but in my experience, the video quality was merely adequate, and with a Netflix show I was watching, not nearly as good as an iPad Pro, particularly in darker scenes. Even with tweaking the lenses to make each eye as crisp as possible, there was always some blurriness, particularly toward the bottom of the screen. The video quality of local movies did seem a little better than Netflix—if you cared, you could probably figure out the optimal settings for ripping DVDs or Blu-ray discs.

The Moon runs the custom Moon OS, which is derived from Google’s Android. It has 2 GB of RAM and a 32 GB hard drive for storing content. That’s all built into an iPhone-sized box with jacks for connecting to the headset and to power, and a big power button for turning it on and off. It supports 802.11n Wi-Fi and Bluetooth 3.0 for wireless connectivity; there’s also a mini HDMI port and adapter cable for connecting it to other video sources. The box contains a 6000 mAh battery that charges via USB in 2 hours and promises 5 hours of video playback.

Although the cable tethering the Moon’s box to the headset is long enough that you could stash the box in a pocket in your clothing, it’s still awkward to manipulate it when you can’t see, and it’s easy to pull it off a table or drop it by moving while wearing the headset.

The headband is highly adjustable and even folds down so you can pack the Moon in a suitcase. Overall, the package gives the impression of being well-constructed, but I’d be leery of carrying it in my laptop bag given the abuse to which that bag can be subjected while traveling.

Moon OS is fairly easy for basic usage. You’re presented with a horizontally scrolling screen of large icons, one of which is always selected. You switch between the icons by swiping left or right on the right earpiece. To navigate down into an icon, you tap the right earpiece; double-tapping brings you back up a level. Changing volume requires swiping around the outside edge of the right earpiece. (Apologies for the screenshots; it’s tricky taking photos through a lens, and they’re fuzzier on the edges than they look in real life.)

Overall, controls are a little fussy, but not hard. That is, unless you want to install and use the Netflix app (it wasn’t pre-installed on my review unit; perhaps that has changed). Moon OS includes a full Web browser, but entering URLs or searching in Google from the onscreen keyboard is clumsy, slow, and error-prone. To “type,” you need to move a Mac-style pointer around by dragging on the right earpiece and tap on the earpiece when the pointer is over the letter you want to enter. 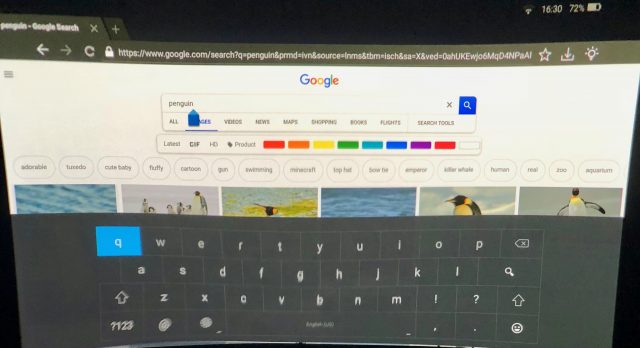 To install Netflix, you must type netflix.com in the browser, after which the Moon requests permission to load the Netflix app. And if you think typing a URL is bad, wait until you need to enter your username and password in the Netflix app. It took me 15-20 minutes to complete the task successfully. Royole apparently has a better approach for installing apps now and suggests that it’s a good way to install Hulu, Vevo, and the YouTube TV app. Presumably, any Android app would work, but don’t expect interactions to be easy.

For instance, navigating within the Netflix app is tricky. As with the Web browser and keyboard, you get a pointer. To scroll within the Netflix interface, you need to position the pointer at an edge of the screen. Tapping opens a show, and double-tapping brings you back to the main screen. It works, but will take practice before it becomes second nature.

I focused on Netflix because that’s where I watch most video, but I suspect Royole expects more people to load movies on the Moon and play them locally from the Videos app. Since it’s an Android device, you can’t connect the Moon to your Mac via USB and transfer video files directly. Instead, you need to use Google’s Android File Transfer app. It works to put your own content into the Movies, Music, and Pictures folders, but it isn’t as good an experience as if the Moon mounted on the Mac Desktop like any other volume.

I’ll admit, I requested a review unit of the Royole Moon last year because it sounded tremendously cool. And you know, it does what it says—the video is decent, if not up to theater standards, the audio is great, and you can get around efficiently enough with the controls built into the right earpiece. (It took me a while to begin testing the Moon because I felt that it was a non-starter without the promised Netflix support, and for much of the time I had it, the Netflix app suffered from a crippling synchronization lag between the audio and video. That’s now solved.)

Despite its technical achievements, I haven’t found the Moon compelling because of its social and physical issues. Problems include:

I decided that the Moon is something I’d hardly ever use for these reasons. Similarly, I can’t recommend it generally, particularly in contrast with an iPad and earbuds, which would be cheaper, more comfortable, and more flexible.

On the other hand, if you live alone in a city apartment and are trying to block out external light and sound, the Moon might be worth a try. Test with a good blindfold and earbuds first, to make sure you don’t mind being cut off from the outside world. At $800, the Moon is not cheap, and its physical hardware and user interface are both a bit awkward, but it could be ideal for those who cannot otherwise eliminate distractions.

The best use case I saw in Royole’s materials is the dentist’s chair, where you really wish you were somewhere else anyway, and where you’ve already signed on for whatever bad might happen. If you frequently travel by yourself, the Moon might also work well for watching movies in hotel rooms. The company also suggests giving it to kids on long car trips, but again, an iPad is likely more appropriate.

In the end, the Royole Moon does provide an immersive experience, for good and ill. In Ready Player One, the main characters need to hide themselves away in the real world so they can participate fully in the virtual world. Apart from specific situations like getting your teeth cleaned, physical seclusion may be necessary with the Moon as well.

To be fair, many new technologies suffer from these conflicts with the real world to greater or lesser degrees. Radio, TV, video games—they all remove us from our surroundings to some extent, and the trend is increasing. I’m undoubtedly dating myself, but I still find it off-putting to share a sidewalk or a coffee shop with people wearing earbuds and staring at their phones. At least it’s possible to get their attention if necessary. While it’s common for teens to walk around like tech zombies, we’ve trained our son to remove his earbuds when he’s in the room with us, because they hamper basic human interaction.

The Royole Moon may not offer full virtual reality, but it is a step in that direction, as are products like the PlayStation VR, a virtual reality headset for the PlayStation 4 gaming console. Although I understand the attraction of virtual worlds and immersive experiences and appreciate that they have their place, I find the concept of augmented reality philosophically much more appealing. We cannot escape our bodies or our environment, so I’d prefer to see technology focusing on enhancing our experience of the world around us rather than trying to replace it.

Comments About The Dark Side of the Royole Moon