Almost a year after they were first announced, Apple has finally shipped AirPlay 2 and Messages in iCloud (see “iOS 11 Gets Smarter in Small Ways,” 5 June 2017):

As always, we recommend holding off on installing any major updates until you’ve backed up your devices and waited a few days to see what, if any, unwelcome repercussions they may bring. 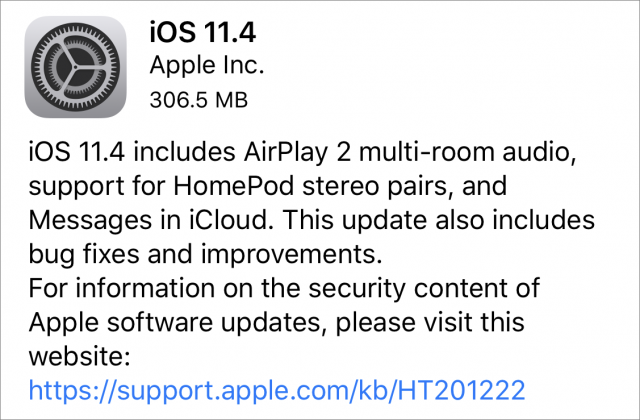 Besides AirPlay 2, the main feature of iOS 11.4 is Messages in iCloud. (We discuss AirPlay 2 later in the article since it spans three operating systems.) This feature was included in some of the iOS 11 beta releases last summer but removed before release.

Before we explain how to turn on Messages in iCloud, there are two things you should understand:

But if you use iCloud backup for your iOS devices, Messages in iCloud might be a win for you, since your messages will no longer be included in iCloud backups. And since each iOS device using Messages in iCloud no longer backs up its messages and attachments to iCloud, that could save you a ton of iCloud storage! In the screenshot below, you can see the difference between Josh’s iPhone X, which has Messages in the Cloud enabled, and his iPad Pro, which did not. Despite the iPhone X having way more stuff on it, its iCloud backup took up a fraction of the space of the iPad Pro.

After Josh enabled Messages in iCloud on his iPad Pro, his iCloud backup size shrank from 3.9 GB to just a hair over a gigabyte, and his overall iCloud usage decreased by about 3 GB.

Regardless, we think it’s shameful that Apple is effectively charging for message-sync features that are generally free on other Internet messaging clients. But, unlike most messaging clients, iMessage is end-to-end encrypted, and that’s still true even if you use Messages in iCloud.

You apparently don’t have to enable Messages in iCloud to fix the longstanding “jumbled message” bug in the Messages app that causes messages to display out of order. The release notes specify that iOS 11.4 “addresses a Messages issue that could cause some messages to appear out of order.”

For messages to upload to iCloud, your device must be connected to Wi-Fi and power. Otherwise, you’ll see a message telling you that uploading is paused.

iOS 11.4 also includes a number of other improvements:

The release notes for tvOS 11.4 mention just one thing: AirPlay 2 support. Specifically, when you install tvOS 11.4 on a fourth-generation Apple TV or Apple TV 4K by going to Settings > System > Software Updates > Update Software, you can now use it as an AirPlay 2 receiver or to send audio to multiple devices.

After you install the tvOS 11.4 update and your Apple TV boots back up, you’re asked in which room your Apple TV is located. If you have HomeKit set up, you’ll notice that some of those room names are HomeKit rooms. That’s because your Apple TV is now counted as a HomeKit accessory. For more information on HomeKit and HomeKit rooms, see “A Prairie HomeKit Companion: Core Concepts” (3 November 2016) and Josh’s book, Take Control of Apple Home Automation.

Like the other updates, the HomePod 11.4 update focuses on AirPlay 2, making each device an AirPlay 2 receiver and letting the HomePod send audio to other AirPlay 2 receivers. The other big feature is stereo pairing, which we explain below. Also, the HomePod can finally interact with your iCloud calendars: ask it something like, “When is my next haircut?” and it should tell you! 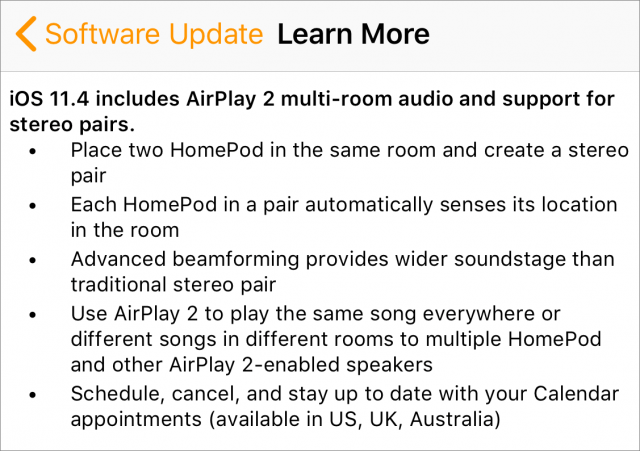 Michael Cohen says that you can also use Siri on your iPhone to control the HomePod. Try telling it something like “Tell HomePod to play.”

In theory, you shouldn’t need to install the HomePod 11.4 firmware manually, but if you need or want to, Apple has instructions. In short, open the Home app on an iOS device that’s signed into the same Apple ID as the HomePod. When you select the Home tab, in the upper-left corner tap the Add and Edit Homes arrow button that generally indicates something to do with location—no, we have no idea why Apple tied it to that button. Then tap Software Update and tap Install.

Now that you have all the relevant devices updated, using AirPlay 2 is simple in iOS: 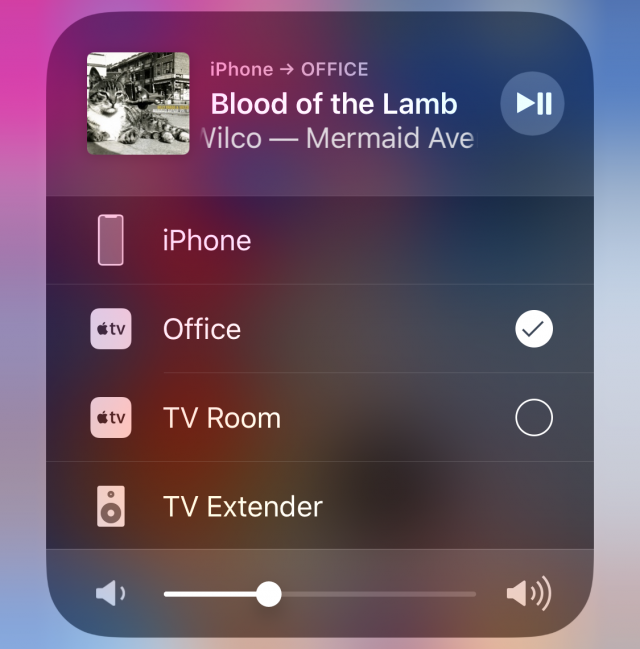 From the media control platter, you can use the sliders to adjust the volume of each device independently. To stop playing to multiple devices, either tap the checked circles to deselect individual devices or tap a single device (not the add/remove circle), such as your iPhone’s speakers.

You can also output to AirPlay 2 devices from tvOS 11.4. To do so while in the Music app:

To output all Apple TV audio to AirPlay 2 receivers, go to Settings > Video and Audio > Audio Output and select them on that screen. 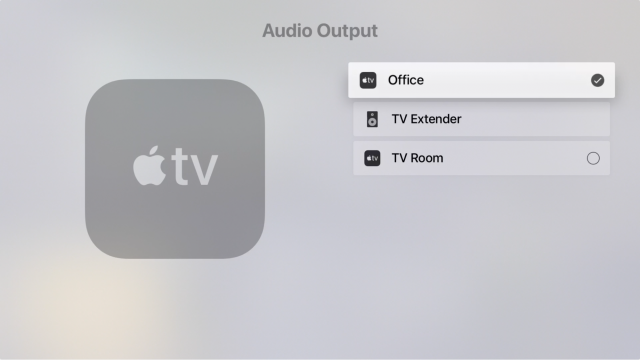 Another useful feature of AirPlay 2 is that you can tell Siri which receivers to use. For example, on Josh’s iPhone X, he can tell Siri to “play relaxing music everywhere” to play music throughout his house. Also, you can send music to a specific speaker, with a command like “play Nine Inch Nails on my TV Room TV.” 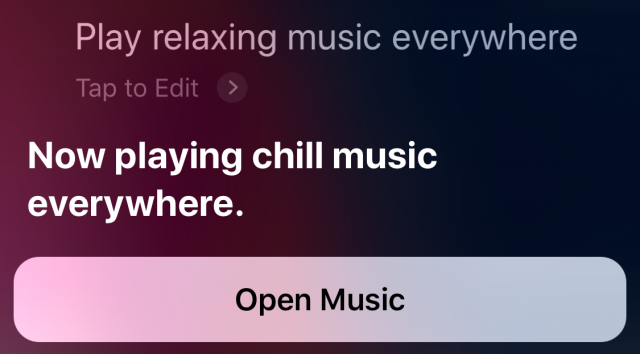 An AirPlay 2 feature unique to the HomePod is stereo pairing. After installing the updates, you’ll see it as a new option in the HomePod’s settings in the Home app. Jason Snell offers more details at Six Colors.

Finally, a curious aspect of AirPlay 2 is that your AirPlay 2 receivers, like the HomePod, are now HomeKit accessories. Enter the Home app and you’ll see them listed in their respective rooms. You can tap its accessory button to play or pause music, but there doesn’t appear to be any other functionality yet. Here’s hoping iOS 12 lets us integrate audio and Apple TV control in scenes and automations. 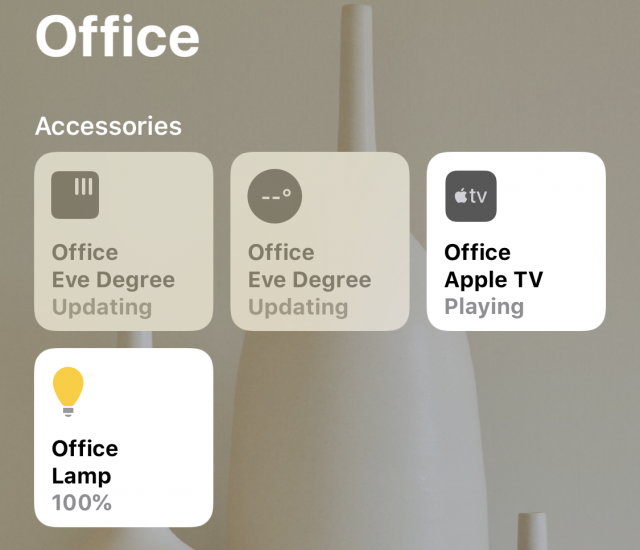 And now for something completely different: watchOS 4.3.1, which weighs in at about 97.5 MB (or larger if you haven’t updated in a while). Install the update from the Watch app on your iPhone (in Watch > Settings > General > Software Update). Remember that the Apple Watch must be on its charger, charged to at least 50 percent, and on the same Wi-Fi network as your iPhone. 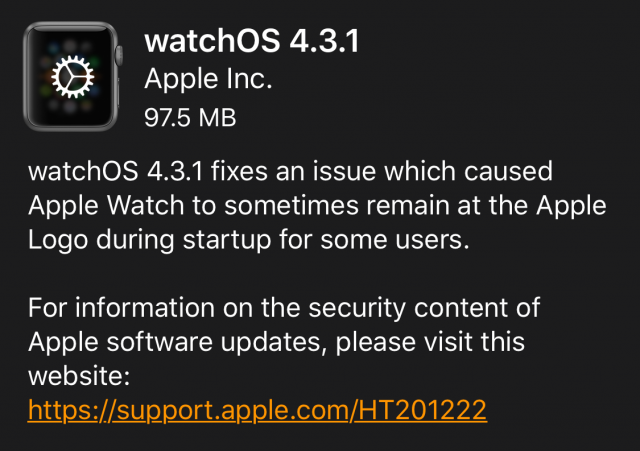 watchOS 4.3.1’s release notes mention only fixing an issue that caused Apple Watches to sometimes remain at the Apple logo during startup. That seems like a good reason to update!