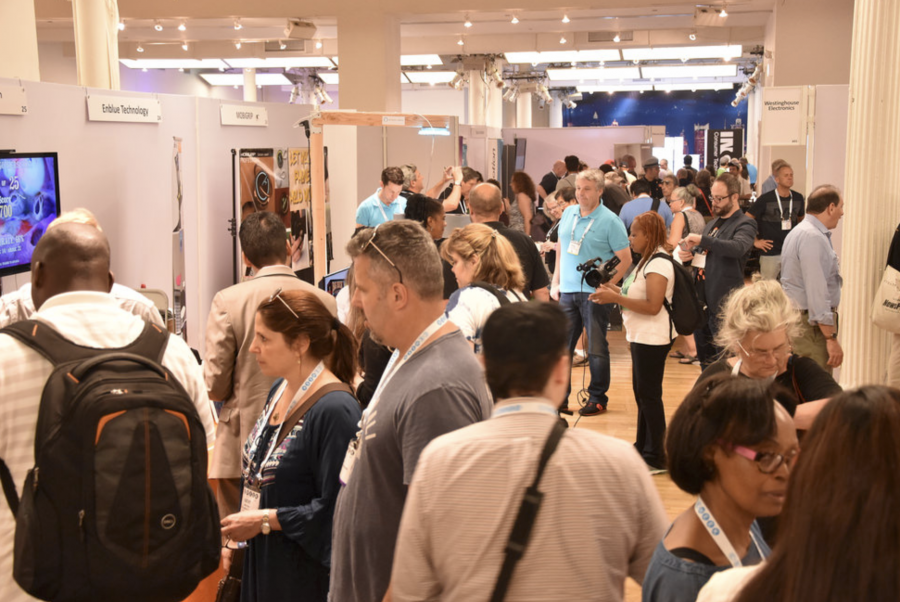 Every January brings the insanely huge CES, formerly known as the International Consumer Electronics Show—see this year’s coverage in our CES 2018 series. Halfway through the year, the Consumer Technology Association runs a much smaller East Coast show in New York City called “CE Week.” (It used to be an entire week; now it’s more like CE Thirty-Two Hour Roadtrip.) I attended the main show at the Javits Center, followed by a similar but unaffiliated show called PEPCOM Digital Experience held at the Metropolitan Pavilion elsewhere in NYC.

The usual disclosures: PEPCOM offers a pretty good buffet and an open bar to journalists who attend—I recommend the lemon mousse—which may lead to somewhat more upbeat coverage, so I always disclose. The gizmos below are in the order I saw them, with the PEPCOM entries starting with Monoprice and Anker. Anyone I cover who gave me anything more than a T-shirt—not necessarily the item I’m covering—is marked with a ?. 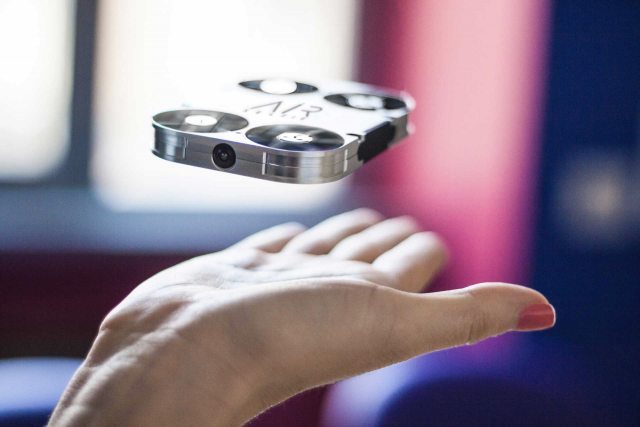 I’m normally not interested in drones, but the AirSelfie caught my eye because it’s the size of a deck of cards and weighs less than that. I’m a sucker for gadgets I can throw into a pocket or backpack and forget about until I need them. The AirSelfie features a 1080p camera and 16 GB of unswappable onboard storage, and it sends a live feed to your iPhone (or Android smartphone), which you also use to steer. Your phone connects to the drone’s onboard Wi-Fi in order to control it, which limits the range to 65 feet (and takes your phone off any other Wi-Fi network you’re using). A 30-minute charge gets you 5 minutes of flight time that you start by tossing it flat up in the air. If the battery dies mid-flight, it’ll automatically descend, but it’s up to you to keep it out of a river or canyon. $199 or $249 with a Powerbank that recharges and doubles as a storage case. In theory, the drone is shipping now while the Powerbank is still to come; in practice, the AirSelfie is out of stock at the moment. 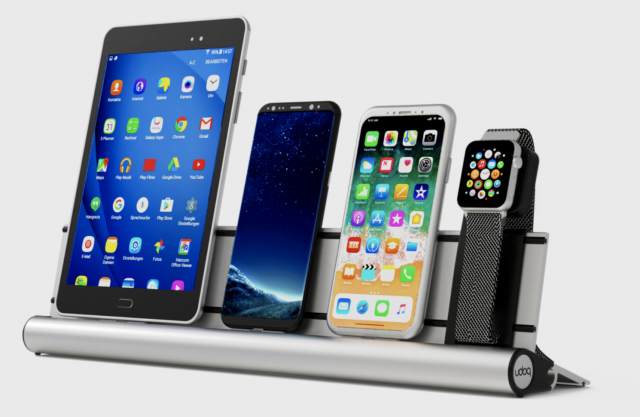 If your daily recharge dance involves plugging five gadgets into five cables, you might be interested in a Udoq. It’s an attractive and heavy metal shelf in varying sizes that can take up to five interchangeable inserts in the base that charge various devices with universal adapters. The iPhone X and Apple Watch each have an available mount that provides wireless Qi charging. The Udoq is slated to ship in December 2018—the CEO said everything was ready now except the iPhone X stand. The “Ultimate Apple bundle” is currently half off for $99 at Indiegogo, which includes two Lightning docks, the Qi iPhone X charger, and the Apple Watch charger stand. 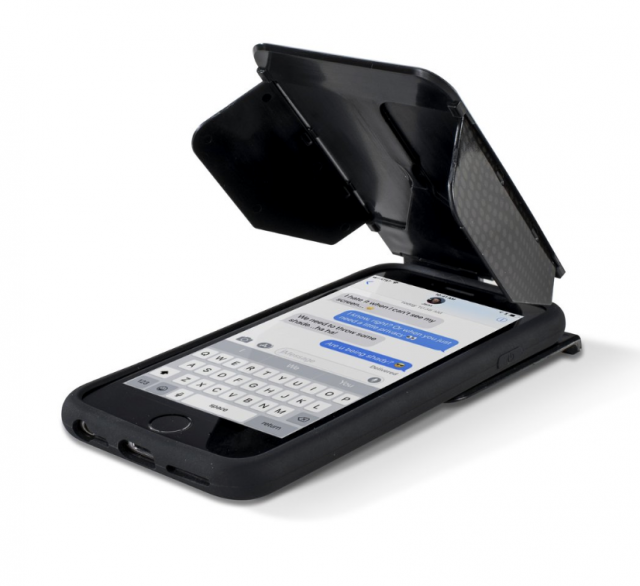 In the “surprised no one’s thought of this before” category, myFlipShade ? is a hinged plastic cover for your iPhone. Flipped down, it’s a screen protector. Flipped upwards, it’s a sunshade. Flip out the wings, it’s a privacy guard against sidelong glances. Flipped over, it’s a stand. It’s one size fits all for every iPhone from the 6 to the X (not the smaller iPhone SE), but the design is such that it’ll work with any phone in that size range so long as you don’t mind blocking your camera. Shipping now for $9.99, it’s also available at Target stores. 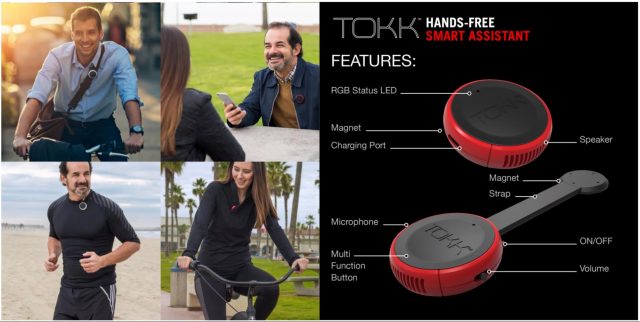 If your reaction to the HomePod was, “that’s great, but I want one for my body,” the Tokk Smart Assistant might be up your alley. It’s a 2-inch round speaker/mic combination that clips magnetically to your shirt collar or neckline with a button for activating Siri, and useful in situations when you don’t want buds in your ears. $49.99, available in black, red, and white.

Since the debut of the AirPods, I’ve grown a bit jaded about the number of nearly identical wireless earbuds I’ve seen at CES—which is why when the Monoprice rep told me their True Wireless earbuds sold for $50, I made the poor woman repeat herself three times to make sure she wasn’t saying $150. Then Anker told me about their Liberty Lite model for $70, so I guess sub-$100 is now a thing. (A search on Amazon reveals other models in this price range from companies I’ve never heard of.) Otherwise, both are what you’d expect: Bluetooth earbuds with 2.5 hours (Monoprice) or 3.5 hours (Anker) listening time, with a carrying case doubling as a charger. Monoprice is shipping now (pictured); Anker is coming out in mid-July. (Googling for the Anker earbuds now takes you to a similarly-named older model priced at $100.) 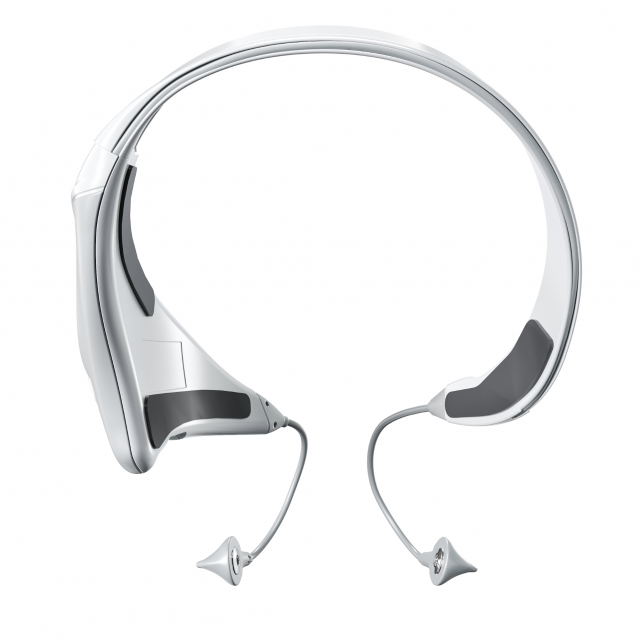 “Revolutionary” e-health gadgets are a dime a dozen at CES, and I have a healthy exaggeration detector to filter such claims before they get to you. My detector was pinging madly while discussing the Modius headset with the PR rep, who claimed “self-reported” weight loss from their users when combined with diet and exercise—to which I replied that anything is effective for weight loss with enough diet and exercise. But after talking to their CEO, it could be the real deal.  [Editor’s Note: In fact, that link goes to an abstract for a poster presentation given by the founder of Modius.] Apparently, the headset works by stimulating your vestibular nerves while you exercise, which somehow retrains your brain so you get a similar metabolism to people who are naturally lean. They currently have hush-hush clinical trials underway—they won’t reveal with whom, apparently because they’re not allowed to—and the CEO came right out and said that they’re selling now because brain-stimulant headsets aren’t regulated by the FDA. So if you don’t want to wait for proof it works—or a review I might do someday, as I could stand to lose a pound (or thirty)—the Modius headset is available now for $499.

On the other hand, my exaggeration detector remains in high dudgeon over the claims of Cortica, an Israeli AI research company. I’ll quote their press release: “Cortica’s technology enables machines to mimic human level cognitive function outside the confines of the brain. This AI liberates machines from the confines of their programming allowing them to grow and learn on their own in the way that people do.” They claim to have done this with extensive research into the mammalian cortex, which I buy, but as for the results? We’re not there yet. Maybe I’ll end up eating these words with a light vinaigrette; if I do, Cortica’s first push is to have their artificial ferret brains driving your cars. 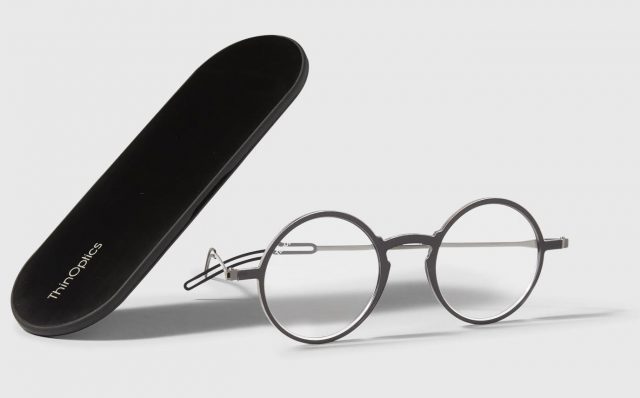 I’ve written before about the ThinOptics line of reading glasses ?. Most of these have unbreakable rubber frames that attach to the bridge of your nose and fold up into a slim carrying case suitable for attaching to the back of your phone or on a keychain. But keep an eye out—hopefully at a middle distance that’s not blurry for you—for their upcoming Frontpage Collection model that manages to get glasses with ear stems into a case the width of a few credit cards: 1.3 ounces total in the case, and 0.3 ounces on your face. They come in various styles and will be available after 9 July 2018 for $49. Their other models are in the $20–$30 range. Lens strengths start at +1.0, which unfortunately doesn’t do much good for my 48-year-old eyes that need a +0.5. 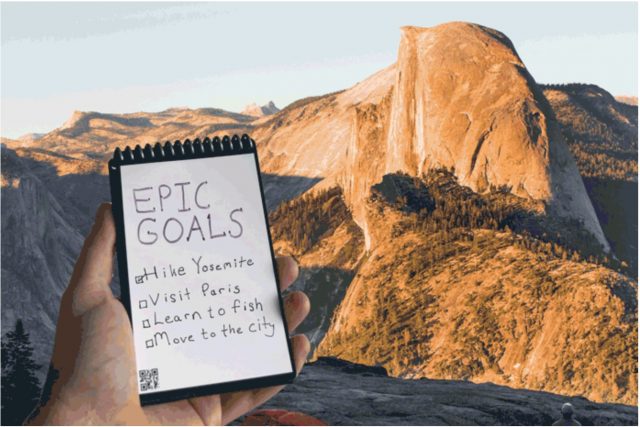 I loved the idea of the Rocketbook ? at CES last January (see “CES 2018: ShowStoppers Prepares for the Collapse of Civilization,” 12 January 2018): a reusable paper notebook with icons at the bottom of every page, and an app that routes pictures of those pages to various cloud services based on which icons you mark. But I haven’t yet taken my promotional freebie out of its packaging since January, as I never need a full-sized notebook. Enter the Everlast Mini, a handheld notebook from the company based on the same idea. Unlike other Rocketbooks that are erasable with a dry-erase cloth (or, weirdly, by putting the whole thing in a microwave), the Everlast Mini uses a damp cloth—so don’t let it get caught in the rain. It ships with the Pilot Frixion pen necessary to make the ink erasable, but works with any pen in that line. Available at Indiegogo starting at $16, shipping in July 2018.

Chefling is a great idea that makes me a bit nervous. It’s a free app, currently available for iOS or Android, which you use to scan either the barcodes on your groceries or your entire receipt. It can then track what ingredients you use and what you have left, and suggest recipes to use it in time. Great so far. But when I asked how the company intends to make money, they said “user data.” Due to a bit of PR rep hesitation, I didn’t quite buy their assurances that they meant aggregate data and not what you, personally, are putting on your dining room table. Sure, it’s not a great deal more invasive than what any store with a loyalty card has on your buying habits—except Chefling will know about all your groceries from any store. I’ll give it a try, because I’m an idiot in the kitchen and I don’t care much about this data getting out—but you should make that decision for yourself before you fire it up. 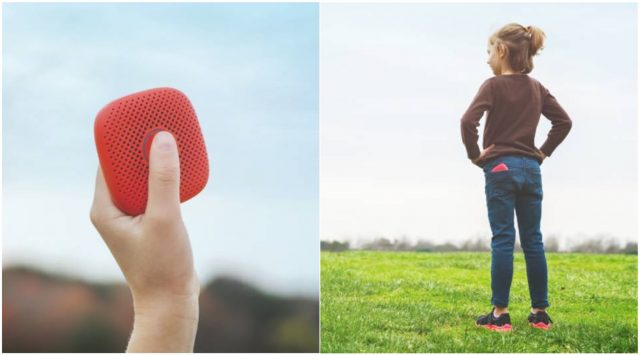 You want your kids to have a phone so you can reach them or find them, but you don’t want them to stare at a screen all day or break something expensive. Consider a Relay, a ruggedized plastic one-button speaker/mic combination with the guts of a cell phone but no screen. A press of the button activates a walkie-talkie or sends a voice message to you (in an iPhone or Android app) or other paired Relays. Meanwhile, you can track your kids with GPS, and yell through the speaker that playtime is over. The Relay works with Wi-Fi or Republic Wireless 4G (which, in turn, relies on T-Mobile and Sprint networks). There may not be a distracting screen, but Republic Wireless promises music, audio-based games, and upcoming access to Google Assistant. Available in packs of one, two, or three for $99, $149, and $199 respectively (you only need one per kid if you’re using the app); each Relay requires a $7/month all-you-can-eat service plan.