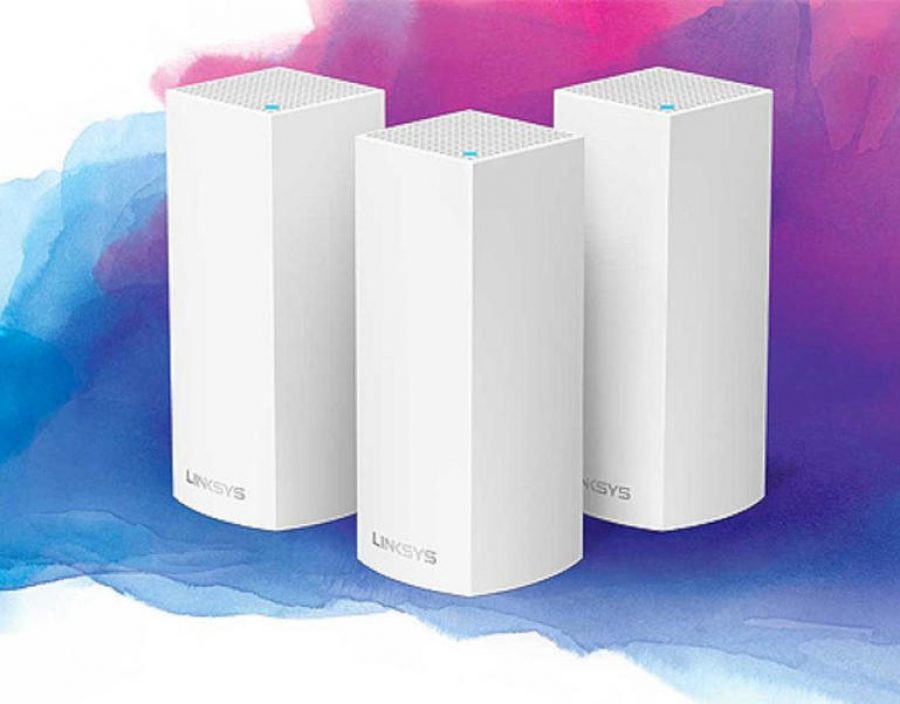 The recent demise of the long-stagnant AirPort line of wireless base stations (see “RIP: Apple AirPort, 1999-2018,” 27 April 2018) made official what had long been understood: It’s time to move on.

Fortunately, solid Wi-Fi router alternatives abound. Some of the latest are of the “mesh” variety, where multiple devices work in unison to create a larger and better Wi-Fi network than any single access point could typically pull off.

I’ve had a good, if not perfect, experience with Eero’s first-generation mesh hardware (see “Eero Provides Good Wi-Fi Coverage in a Handsome Package,” 25 June 2016). But I was curious about Velop, a mesh system from Linksys, one of the best-known names in networking.

In part, that’s because Velop kits are the only mesh products sold in Apple’s brick-and-mortar stores and the company’s online storefront. The white, tower-like Velop devices even resemble the AirPort Extreme hardware. Although it’s overreaching to assume that Apple is anointing Velop as the official successor to the AirPort line, it does suggest that AirPort refugees have a high probability of entering the Velop fold. 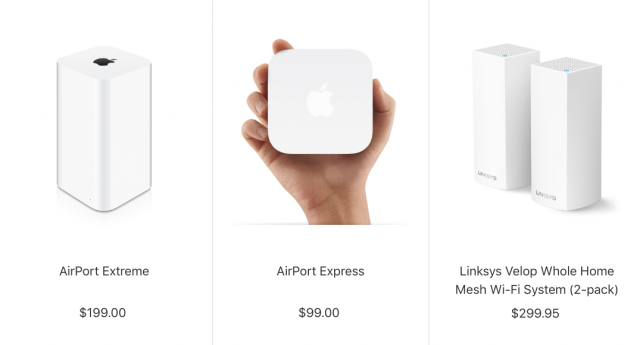 I tested the $179.99 tri-band Velop routers. They’re called “tri-band” because each has a 2.4 GHz radio and two 5 GHz radios. The 2.4 GHz radio provides throughput in the neighborhood of 400 Mbps at a greater range, and the 5 GHz radios offer twice that—apiece—but at a lesser range. Tri-band essentially means a third lane of wireless traffic in homes like mine where many gadgets are vying for online access.

Linksys recently released lower-cost “dual-band” Velop nodes for $129.99, each with a radio in both the 2.4 GHz and 5 GHz bands. I didn’t test these nodes because conversations with my contacts at Linksys lead me to believe that they might have struggled a bit in terms of range and performance with my demanding circumstances: a huge house, many devices tapping into the Wi-Fi, and a need for speed. I also had a bit of trouble with the dual-band Eero gear I recently tested—mostly in terms of achieving flawless coverage.

You can add a dual-band Velop node to a Wi-Fi network of tri-band nodes, by the way, to save some money while extending coverage.

Conveniently, a Velop-based network broadcasts a single SSID, unlike some devices that announce a network name for each band. Coverage is good, too; according to Linksys, each tri-band Velop node covers 2000 square feet (185 square meters).

For my testing, I used a tri-band three-pack, with one node plugged into the Xfinity cable modem in my second-floor home office, and the other two modules placed on the first floor—one in the living room, where my wife typically uses her MacBook Air and needs flawless Wi-Fi service lest marital tension ensue, and the other in the kitchen where I’m often on my iPad.

As with other mesh products, Velop routers are somewhat simple. On the bottom, hidden from view, are two Ethernet ports (for connecting to a modem as well as hooking up printers and gaming consoles), a reset button, an on/off switch, and a power jack. There are no USB ports for plugging in external gear, like network drives, as was possible with some AirPort base stations. A single light on top provides at-a-glance status reports based on color. 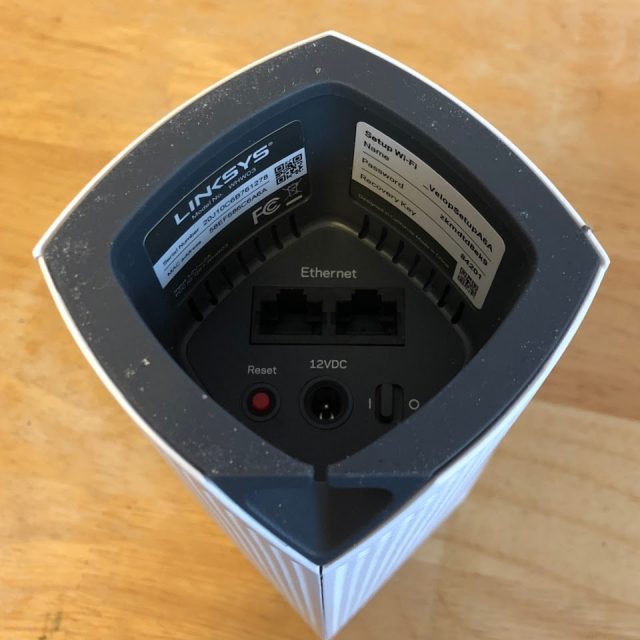 As is typically the case with other mesh Wi-Fi gear, you mostly adjust and control Velop hardware using a mobile app, and the Linksys app is available for both iOS and Android. There’s also a browser-based interface, but it isn’t easy to find, and Linksys clearly doesn’t want most people using it.

Velop Setup and Use

Setting up mesh systems tends not to be overly challenging since they are intended for the often tech-clueless masses, and Velop mostly fits that mold—although I did run into a few minor issues.

A Linksys account is required for setup, and I had no difficulty creating one. When I started on the hardware configuration, however, I got into a weird loop: The Linksys app would not let me initiate setup without logging in to my account, but every login attempt dumped me back to the first setup screen. In desperation, I deleted and reinstalled the app, which resolved my issue.

Setting up the first of my three Velop devices (the one connected to my cable modem to tap into its Internet connection) had one overly geeky moment. I had to flip the device over, find a device ID and password (each a lengthy string of characters) and painstakingly tap each into the app for a temporary Wi-Fi link to the device. I’m not sure why this came up because it isn’t supposed to be part of standard installations.

These modest difficulties aside, setup was a breeze. My iPhone detected the other two Velop nodes automatically. For each of the three, the app guided me through screen after screen to complete the setup. The Velop nodes were able to detect each other just fine. This eliminated the need to futz with gear placement for optimal coverage, unlike my earlier spotty experience with Eero. 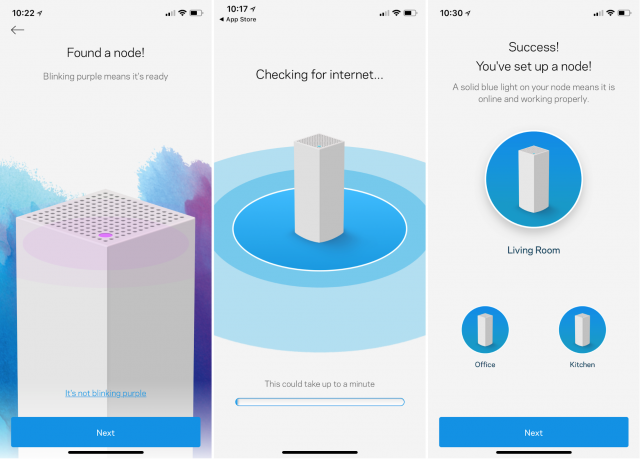 Sometimes mesh gear needs time to adjust itself to achieve optimal performance, but Velop worked pretty well right out of the gate.

My broadband connection provides about 100 megabits per second (Mbps) for downloads (uploads are only in the single digits), and the Velop gear handled that with ease. Just about anywhere in my house, I had unfettered Internet access.

What if you have faster broadband? Residential 1 Gbps service is increasingly common—Comcast, CenturyLink, and U.S. Internet provide this level of service near me in the Minneapolis/St. Paul metro area, albeit at a high cost.

To see whether my Velop devices could handle such higher speeds, I used TotuSoft’s LAN Speed Test utility to see how fast the bits were zipping among the Velop nodes within my house. In other words, I was testing throughput across my LAN—the local area network—instead of going out to the WAN, or wide area network. LAN throughput is also important if you copy files from one computer to another in your house, or back up across your network to a Mac acting as a Time Machine server.

I saw decent results. Wandering throughout my residence with a laptop running LAN Speed Test, I easily managed uploads in the 1 Gbps range and downloads in the 1.5 Gbps range. In other words, the Velop equipment seems to work nicely for those with extra-fast broadband or who need fast networking between local computers.

Keep in mind that physical obstructions such as walls affect performance to varying degrees, depending on the building’s materials. My Velop performance degraded a bit when I went outside onto my porch even though a Velop node was almost within arm’s reach in my living room. But that is the beauty of mesh systems! If I needed more throughput on the porch, I could just add a node—even temporarily.

Tapping into the Linksys App

No decent mesh system is complete without a reasonably well-designed and full-featured app, and the Linksys app doesn’t disappoint. App features include: 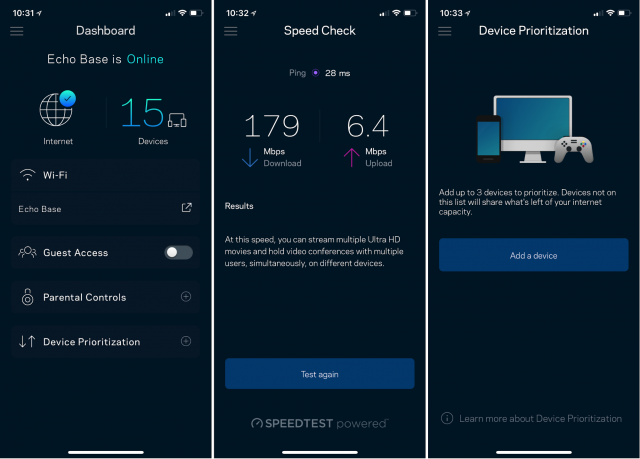 My Velop testing went well. My testing did not unearth any notable red flags, with the possible exception of those seemingly suspect speed-test results. However, the setup I tested has one big issue: it’s on the pricey side. You should consider multiple options with varying price levels, and I have suggestions.

Eero has released second-generation, tri-band gear that can potentially save buyers a bundle. For instance, Eero provides a three-pack for $399 (a recent drop from $499, and $100 cheaper than the Velop three-pack). One caveat to keep in mind: the kit includes one regular node—the rough equivalent of a Velop node—plus two “beacon” devices with fewer features (a lack of Ethernet ports, for instance). 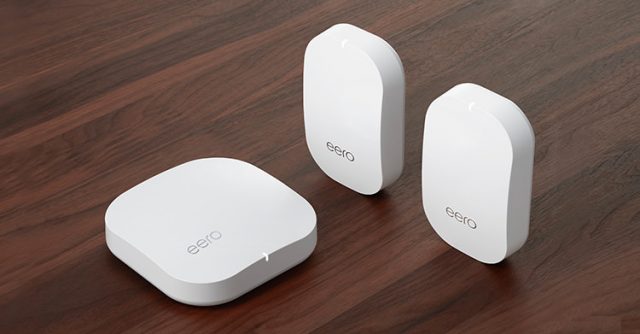 On the plus side, Eero’s beacons plug directly into outlets for a more elegant mesh deployment. They also illuminate the space immediately around them, thus doubling as nightlights, which could be good or bad. 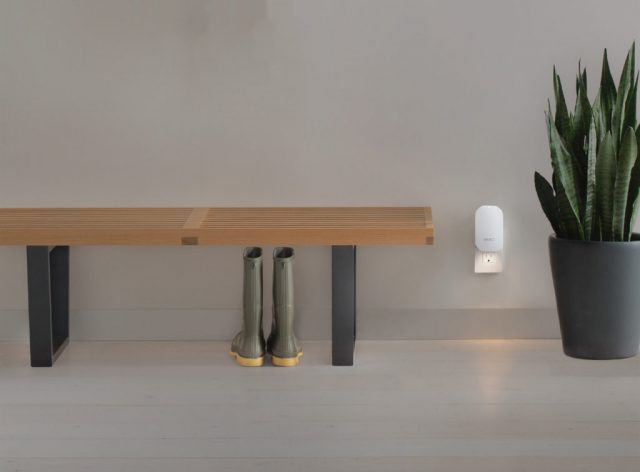 The Eero gear I received for review performed nicely with its tri-band capability roughly equal to that of my Velop network for rock-solid Wi-Fi. As with Velop, you can mix and match first- and second-generation Eero devices.

Also, for the many Comcast users out there, Comcast recently added a mesh option to its line of Xfinity xFi routers. Like Eero beacons, the xFi Pods plug directly into wall outlets to extend the primary router’s wireless coverage. I can attest to the urgent need for this since my Comcast-issued Wi-Fi router (which is also my broadband modem) can’t begin to cover my house in bandwidth. 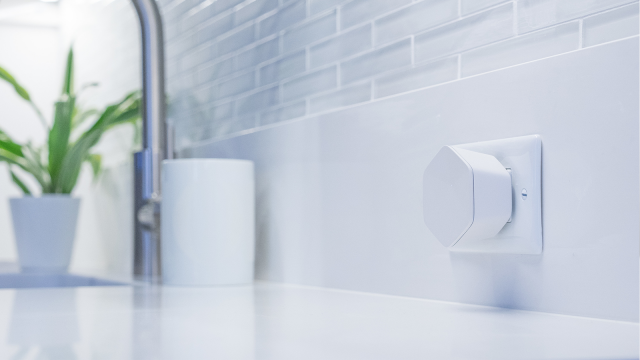 When I deployed the xFi Pods in my 3-unit loaner kit, though, I was in business… up to a point. The farther I got from the central Xfinity router, the more my download speeds decreased. Comcast acknowledges this in a FAQ, noting that the xFi Pods “are not intended to provide the maximum speed of your Internet tier throughout your home.”

This is forgivable given the cost: a three-pod kit is only $119, and a six-pod bundle is just $199. That is dynamite pricing for those who need widespread coverage but don’t require maximum performance. The xFi Pods, of course, work only with an Xfinity router, and only with certain xFi models at that.

Interoperability, in fact, is a problem in the mesh realm—you cannot mix-and-match devices from different makers. There are indications, though, that a solution for that problem is on the way thanks to an EasyMesh standard that’s reportedly in the works.

What Should You Buy?

For now, you must commit to one brand or another, and Velop is a full-featured option for those who aren’t on a tight budget. Its setup was easy, and both performance and coverage were very good. I have no complaints with how my test gear operated.

However, the Velop nodes are hardly inconspicuous. Those who don’t like the styling might grow annoyed by the rectangular obelisks sitting on shelves or tables with their cords snaking towards wall outlets. (My wife did, in fact, tire of their prominent presence.)

That’s why the Eero and Xfinity products are so appealing. Both the Eero beacons and xFi Pods are more understated and elegant since they plug directly into wall outlets.

In addition, the Eero and Xfinity gear can be significantly cheaper than the Velop nodes—although with some compromises. With Eero, you get comparable performance at a lesser cost but sacrifice some hardware features. With the xFi Pods—available only to Comcast subscribers—you give up performance but get reliable residence-wide Wi-Fi.

For tech geeks who want the most features, don’t mind paying more, and aren’t concerned about looking at their networking hardware, I can heartily recommend Velop. For those who are less concerned about technical capabilities and don’t want to decorate with white pillars, Eero makes a lot more sense since it’s more elegant and inconspicuous with no performance hit. If you use Comcast and are happy to trade performance for a lower price, the xFi Pods are a fine, low-cost solution.