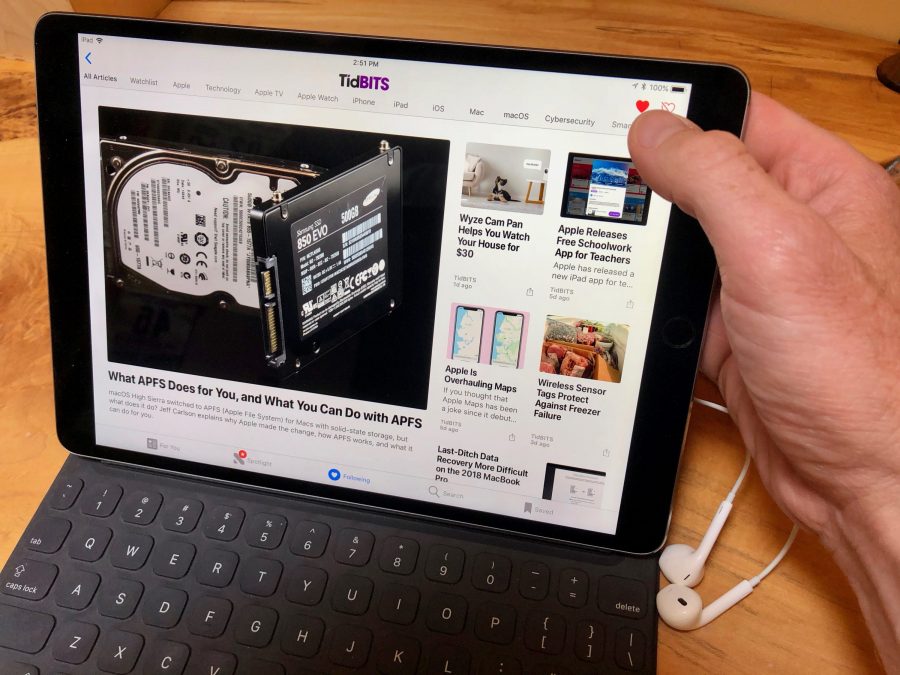 Shortly after we unveiled our new Internet infrastructure, I wrote “How to Read TidBITS in Apple News” (19 April 2018). That generated a brief spike in our Apple News traffic, but the readership numbers soon dropped to single digits per day. Even more annoying, for at least some people, adding TidBITS to the Following list didn’t result in them seeing TidBITS articles in their For You section. Given that the News app is pre-installed on millions of iOS devices in the US, UK, and Australia and that we cover Apple-related topics, it was almost unimaginable that so few people would see our articles.

Frustrated, I eventually managed to make contact with Apple’s Publisher Relations team. In a call, I learned a few things about how the Apple News algorithm works that enabled me to make some adjustments to how we’re publishing there.

First, it seems that Apple News is focused on large publishers and therefore needs quite a number of articles for training its natural language parser. Since we publish only about 50 articles per month, whereas a large publisher might release several times that per day, I was told that it could take several months before the algorithm knew what to do with our content.

Happily (if a little suspiciously), a few days after I scheduled my call with Apple, it suddenly started recommending our articles to new readers despite me not having changed anything since early April.

Most notably, I was told that Apple News cares quite deeply about the number of people who follow a particular publication—the more followers, the more likely Apple News is to recommend that publication’s articles to other people.

Can you do me a favor if you’re in the US, UK, or Australia? Even if you don’t use Apple News regularly, please tap the heart button in the TidBITS screen in Apple News. It would be fabulous if this significantly increased TidBITS readership.

The easiest way to follow TidBITS is to click this link while reading on your iPhone or iPad, or on a Mac running the beta of macOS 10.14 Mojave, which has the News app too. Or go to tidbits.com in Safari and tap Get TidBITS > Apple News. (On an iPhone, tap the ellipsis button to the right of the TidBITS logo and scroll down in the menu to find Apple News.) Either way, you’ll be sent to the TidBITS channel in the News app. Tap the heart icon in the upper right to follow TidBITS.

As an Apple News publisher, I can create free-form section names and use them to categorize our articles—you’ll see those section names at the top of our channel in Apple News. Since Apple doesn’t publish any best-practices advice, I guessed that sections were mostly for users and created just two: Articles and Watchlist.

However, Apple subsequently told me that the Apple News algorithm also takes some of its cues from those names, so I’ve added more sections that match up with topic names (Apple, Mac, iOS, Cybersecurity, and so on) that people can find in Apple News when searching for specific topics of interest.

My hope is that there are a lot of people following topics like Apple and Mac, and by putting our articles into those sections manually, they’ll be more likely to be recommended to those people. Early analytics seem to bear this out—once I started populating the new sections, roughly a third of our traffic started to come from the Topic Feeds source, as opposed to about a tenth in the week before (and literally none before that). 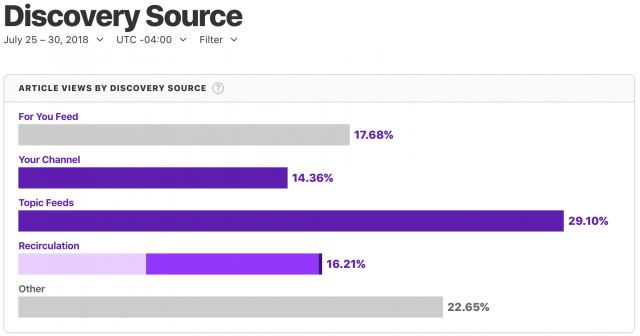 As you can see in this Reach chart (which shows the number of unique users who saw our headlines or viewed our articles) for the last 28 days, things started to pick up on 20 July 2018 and skyrocketed shortly after that. Traffic fell off late last week, which may have been related to not publishing many new articles for a few days, but I hope it will pick up again as this week’s articles start rolling out. I’m also looking forward to seeing if our readership increases when Mojave ships, since I believe a lot of TidBITS readers prefer to read news on their Macs. 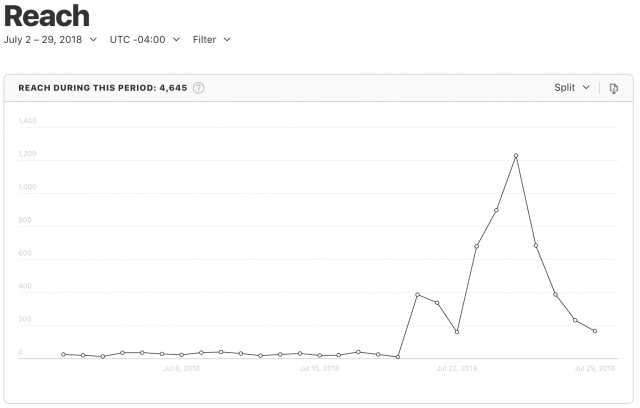 Regardless, I’d really appreciate it if you could follow TidBITS in your News app, even if you don’t use it regularly. Despite this large uptick in traffic, only 5 people have followed our channel in the last 28 days, and our total follower count is just under 900. Let’s see how high we can get that number!