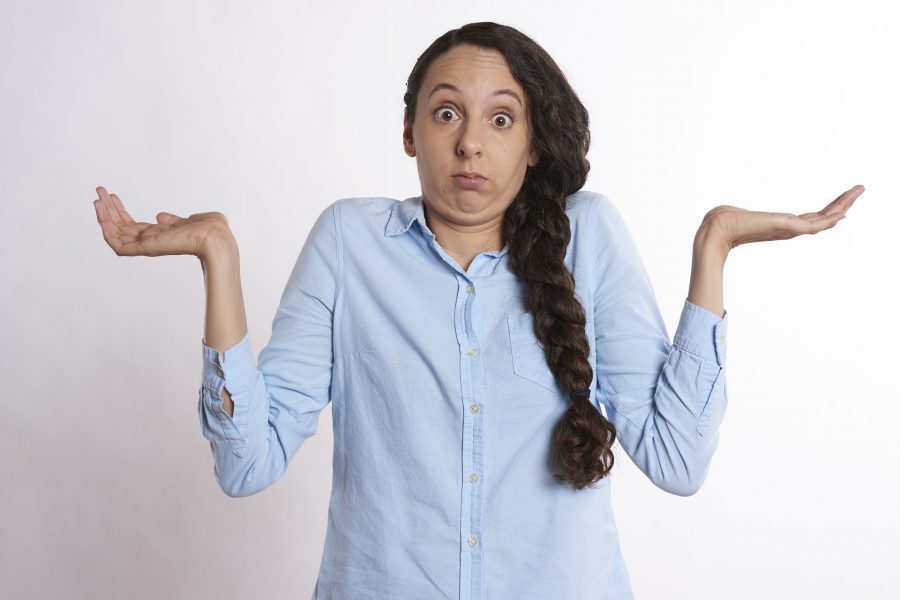 As magical as Siri can be when it works, it’s annoying when Siri fails due to not realizing who you are, doesn’t understand who your mother is, or pronounces names wrong. Apple provides a few ways you can teach Siri about yourself and the people in your life, but because many of them require voice commands, they’re not obvious or well explained.

Tell Siri Who You Are

Siri works better if it knows who you are. For instance, when Siri can access a contact card assigned to you, you can issue commands like “Give me directions home” because Siri can look up the home address on your contact card. This contact card also lets you tell Siri who your relatives are.

You might already have this set up—check in Settings > Siri & Search > My Information or just ask Siri “Who am I?”. If you haven’t yet introduced yourself to Siri, tap My Information and choose your contact card from the list. (And if you don’t have your own contact card, open the Contacts app and tap the + button in the upper-right corner to add a new contact with your information.)

Teach Siri Who Your Relatives Are

You can ask Siri to perform tasks like “Call Bertie Wooster.” However, we often don’t refer to those close to us by their names, but instead by how they’re related to us, like “my mom,” “my brother,” “my assistant,” etc. One of the handiest things I do with Siri is telling it to “Call my wife,” after which it calls Hannah Centers without me having to give her name explicitly.

The simplest way to set up such a relationship is via Siri itself, by saying something like “Hannah Centers is my wife.” Or you can do it with these steps:

If you set the relationship to “spouse,” Siri will respond to either “husband” or “wife” for the same person. So if I say “Call my husband,” the iPhone still dials Hannah. 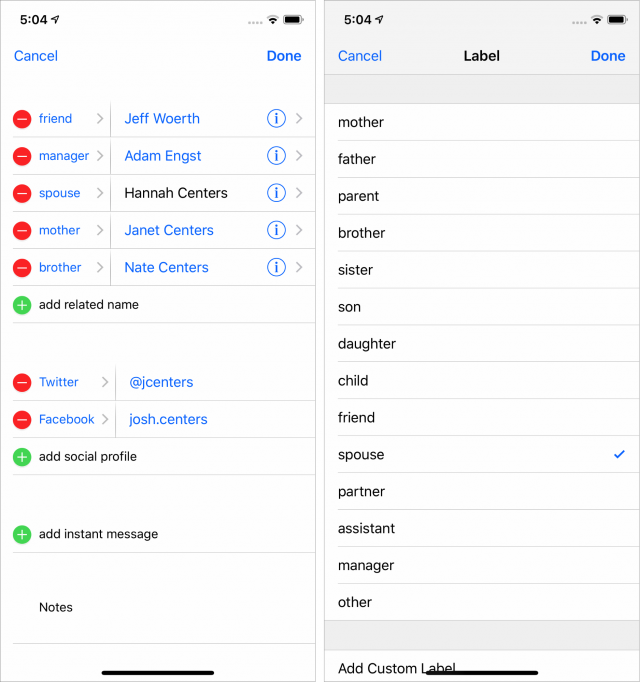 Let’s say your mom’s name is Dahlia, but you only call her “Mom.” People “solve” this problem by setting the first name for their mother’s contact card to “Mom,” which is terrible data hygiene. If you were to share that contact card with someone who has done the same thing, they would end up with two cards called Mom. Apple added a Nickname field to Contacts for just this purpose. Here’s how to assign it to a contact:

From then on, in Messages and phone calls, that person’s name will be replaced by their nickname. Also, you can give Siri commands based on the contact’s nickname. So if you have a friend named Augustus Fink-Nottle, and you’ve set his nickname field, you can tell Siri to “Call Gussie.”

One more nickname-related tip. By default, Messages displays the first name of the person with whom you’re having a conversation, and if you have a nickname assigned to that contact, it shows the nickname instead. If you’d prefer a different short name format, you can pick one in Settings > Contacts > Short Name. 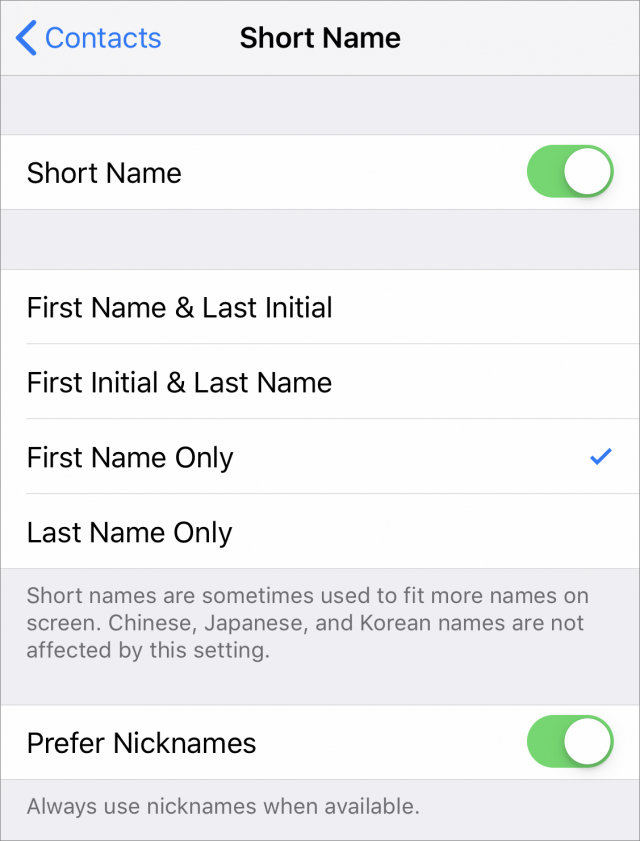 Teach Siri How to Pronounce Names

Out of the box, Siri often butchers names with unusual pronunciations, but Apple provides a few built-in ways to correct it. The easiest is to tell Siri “Learn how to pronounce Contact Name.” Siri will ask you first how to pronounce the first name followed by the last name, and after each presents a list of options. Tap the play buttons to hear each pronunciation and then tap Select next to the best one. 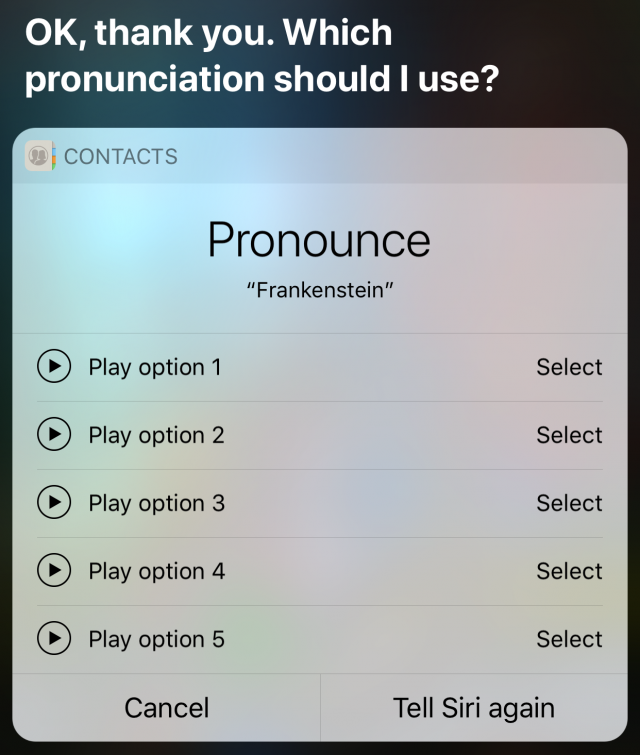 A quick way to test how Siri thinks a name is pronounced is to tell it “Show me the contact card for Contact Name”—this requires Settings > Siri & Search > Voice Feedback be set to Always On.

Alternatively, you can train Siri with the pronunciation and phonetic name fields in Contacts. You add these fields the same way you add the Nickname field above. The two fields appear to work the same from Siri’s perspective, but the phonetic fields change how the name sorts in lists as well as how it’s pronounced. That’s essential in Japanese, for instance. 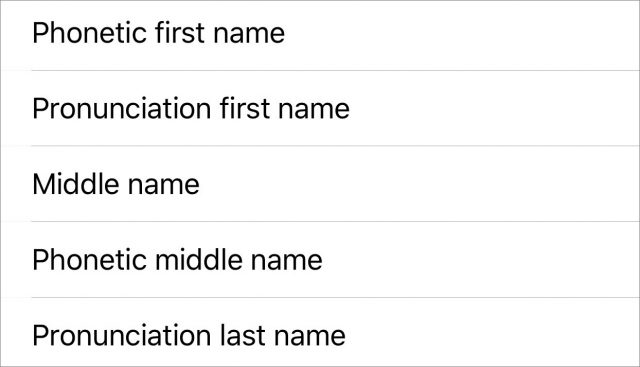 I prefer this way of training Siri since you get a handy pronunciation reminder below the contact’s name. Plus, if you use these fields, the information syncs with all the rest of your devices via iCloud, so they’ll pick up the correct pronunciations as well. Training Siri’s pronunciation with the voice command seems to work only on that device.

Voice assistants still have a long way to go before we’ll be able to carry on anything resembling normal conversations with them, but with a little setup and training, you can make talking about people with Siri a lot less stilted.