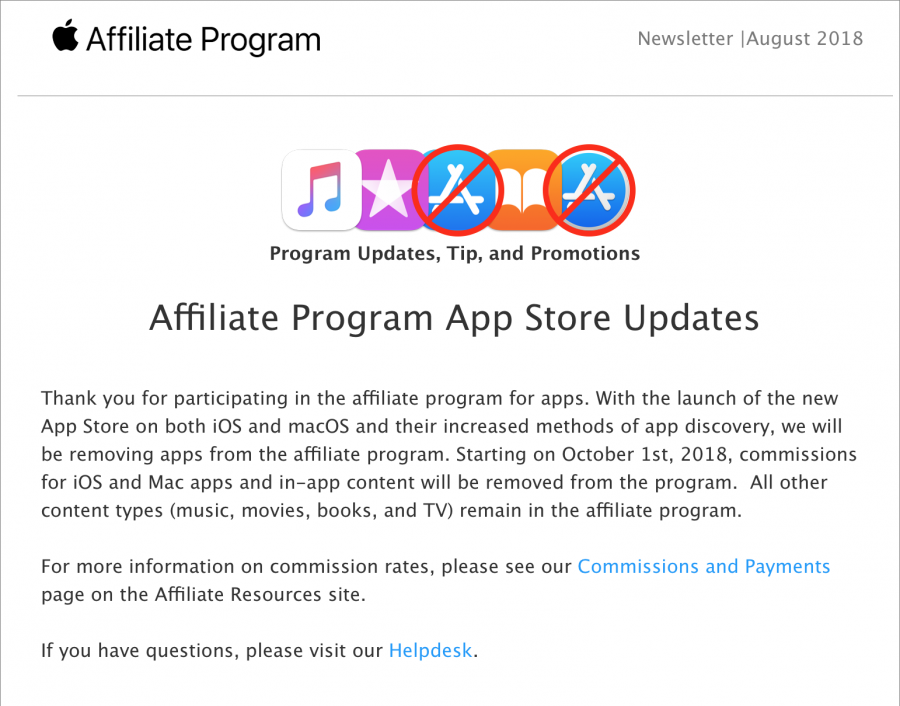 In a terse email message to iTunes affiliates, Apple announced that it would be ending affiliate payment for Mac and iOS apps sold through the App Store as of 1 October 2018.

Apps bought via an iTunes affiliate link currently earn the affiliate 7% of the purchase price, although Apple attempted to drop that rate to 2.5% a year ago. After backlash from developers and publishers, the company reduced just the in-app purchase rate to 2.5%.

Unsurprisingly, the news elicited harsh reactions from the Apple media world, with publications like TouchArcade seeing it as an existential crisis and others bemoaning the loss of small but welcome bits of revenue.

Although TidBITS is enrolled in the iTunes affiliate program and our previous content management system programmatically added the affiliate code to appropriate URLs, we earned too little money from it (roughly $1000 since 2014) to focus on it or even remember to move the feature forward to our new site.

We’ve also always been somewhat uncomfortable with the inherent conflict of interest involved with affiliate fees—there’s an unavoidable link between publication revenues and encouraging sales. It just feels unseemly; not so much so that we’ll leave the money on the sidewalk, but enough that we’ve avoided adjusting our editorial mix to favor articles that generate income via affiliate fees.

Why Is This Happening?

Historically, affiliate programs work well for large retailers because they incentivize small players to promote specific products. An affiliate program is a lucrative long-tail play for the retailer because it brings in a lot of cumulative sales from numerous affiliates, most of whom don’t make much but are happy with the incremental revenue. Many fewer companies and publishers, such as Wirecutter, earn significant amounts because they’ve built their entire revenue model around recommending products that generate affiliate fees.

The problem with this approach, of course, is being at the mercy of the company offering the affiliate program. This latest news brings to mind an old saying among Mac developers: “Always remember that Apple is not your friend.”

So why is Apple eliminating affiliate fees for apps and in-app purchases now? The letter to affiliates puts it quite bluntly—Apple believes that the redesign of the App Store for iOS and macOS will improve app discovery enough that there’s no reason to incentivize independent media outlets to review apps. Apple says that the new Mac App Store will have in-depth stories written by a global team of App Store editors, and while you probably won’t see their bylines on those stories, we’ve been watching Apple hire experienced industry writers for those positions. Of course, as it becomes ever harder for publications to survive, it’s not surprising that journalistic talent is being forced to make the jump to industry.

Even though affiliate fees have never been an important part of our revenue model, I still think Apple’s move is unnecessary, mean-spirited, and harmful:

It’s bad enough when Apple builds the features of a popular app into macOS or iOS, effectively killing the app without recompensing or even notifying the developer. (This is called getting “Sherlocked,” a term that dates to when Apple built the features of Karelia’s Watson app into Sherlock 3 in Mac OS X 10.2 Jaguar.) At least in the case of Sherlocking, there’s an argument that Apple could have been working on the app independently, or that the functionality is so important that Apple should provide it to all users.

But what, apart from the 7% affiliate fees for recommended apps, does Apple gain from kicking small publishers to the curb? Enough will survive this that App Store editorial will still have competition, so Apple can’t benefit by monopolizing all app coverage. And how would monopolizing coverage of independent apps help Apple anyway? More coverage equals more sales—it’s a simple equation. It’s not as though Apple supports industry media with advertising either.

It’s also worth noting that the democratization of media technologies has had an unanticipated consequence. Any media-savvy organization, whether it’s a multinational corporation or full-fledged government, can increasingly control public perception not just by manipulating social media but also by bringing content creation and dissemination in-house. It’s all about control in a media world that no longer has gatekeepers. Apple pulled out of Macworld Expo years ago because it could just as easily hold its own product release events, and now we’re seeing Apple do the same to industry publications by competing with them via App Store editorial.

In the end, I’m disappointed in Apple. Not surprised, since Apple has never acknowledged that the media plays a vital role in the broader Apple ecosystem, but disappointed that a company that puts so much effort into bringing joy to users can simultaneously behave so callously to some of its greatest supporters.