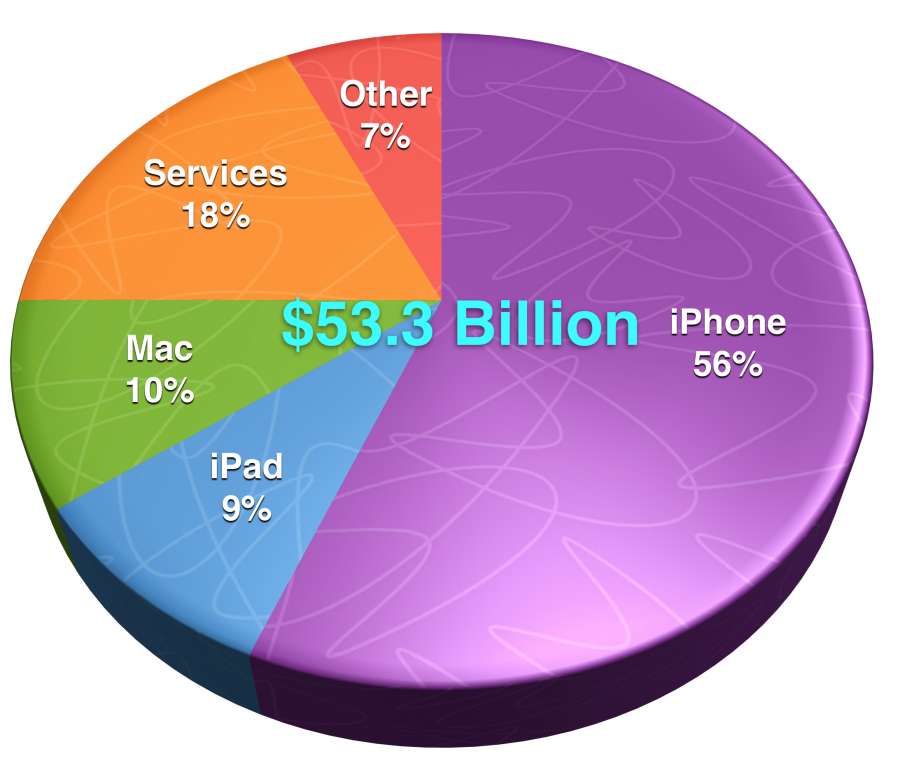 “Our Q3 results were driven by continued strong sales of iPhone, Services, and Wearables, and we are very excited about the products and services in our pipeline,” Cook said. 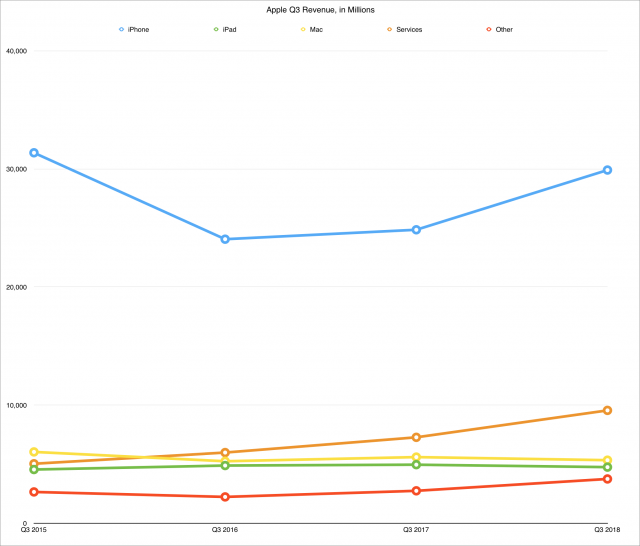 The iPhone did well this quarter, with a year-over-year revenue increase of 20%. Much of that increase can likely be explained by the high price of the iPhone X, given that the number of iPhone units sold increased by only 1%. The iPhone now accounts for 56% of Apple’s business, bringing in $29.9 billion this quarter alone. Unsurprisingly, the iPhone X was once again the most popular phone.

iPad revenues were down 5% year-over-year, although Apple experienced a 1% uptick in units sold. That was likely due to the opposite of the iPhone situation because Apple’s most recent iPad release, the $329 sixth-generation iPad, probably accounted for more of the share of the tablet sales mix than the higher-priced iPad Pro line.

Mac unit sales were down a more substantial 13%, with 3.7 million Macs of various types sold, although higher average per-unit prices led to a revenue decline of only 5% when compared to Mac revenues a year ago. Looking forward, the launch of the new MacBook Pro models late in the quarter may translate into better performance for the Mac category next quarter. Nonetheless, Mac market share worldwide is up, and Apple says that 60% of Mac purchases last quarter were by newcomers to the platform.

Other Products and Wearables

The vague Other Products category, which includes the Apple Watch, Apple TV, AirPods, Beats headphones, iPod touch, dongles, connectors, and other things, also had a healthy quarter, with a whopping 37% year-over-year revenue increase. Wearable revenues (headphones and watches) were up over 60% year-over-year, thanks in part to the ever-popular AirPods. “AirPods continue to be a runaway success, and we continue to sell them as fast as we can make them,” said CFO Luca Maestri. Cook also noted that Apple Watch sales rose dramatically.

There hasn’t been much Apple TV news lately, but Cook mentioned that cable provider Charter would be offering Apple TVs to its nearly 50 million US households later this year. Charter will also release a Spectrum app for Apple TV (which makes one of this article’s authors happy—or, at least, optimistic). During the analyst’s questions, Cook mentioned his excitement over Apple’s media creation plans, including the company’s partnership with Oprah Winfrey. However, he was coy about the specifics of what Apple is doing, remarking that he was “not ready to talk about it today.”

All that said, the revenue star of the report (Cook even called it “stellar”) was Services, which took a big leap—a 31% increase in revenues from last year’s quarter—making it Apple’s second-largest revenue segment behind the iPhone. Services accounted for 18% of Apple’s quarterly revenue, nearly equaling the combined revenues from iPads and Macs. The company predicts a similar Services revenue improvement next quarter.

Services brought in more than $9.5 billion during the quarter, with subscriptions becoming a significant part of the revenue mix: Apple now has some 300 million active subscribers, and more than 30,000 apps offer subscriptions. Additionally, the App Store has generated twice as much revenue as Google Play so far in 2018. Apple Music saw 50% growth over the past year, and Cook said he saw opportunities to “grow the market” even more in the future. He also reported that AppleCare revenues grew at their highest rate in 18 quarters.

Apple Pay use continues to expand and will be embraced by 7-Eleven and CVS later this year. If you do a double-take at CVS adopting Apple Pay, that’s because it fought Apple’s digital payment offering for years (see “CVS Launches Apple Pay Competitor,” 15 August 2016). Cook also mentioned a healthy increase in Apple Pay Cash use, a service that Apple introduced late last year (see “How to Use Apple Pay Cash for Person-to-Person Transactions,” 7 December 2017).

Looking at these results, a few realities about Apple’s present and future become clear:

All told, the latest results, combined with the company’s $247.3 billion in cash, suggest that Apple should be able to remain in business for at least another quarter or two.