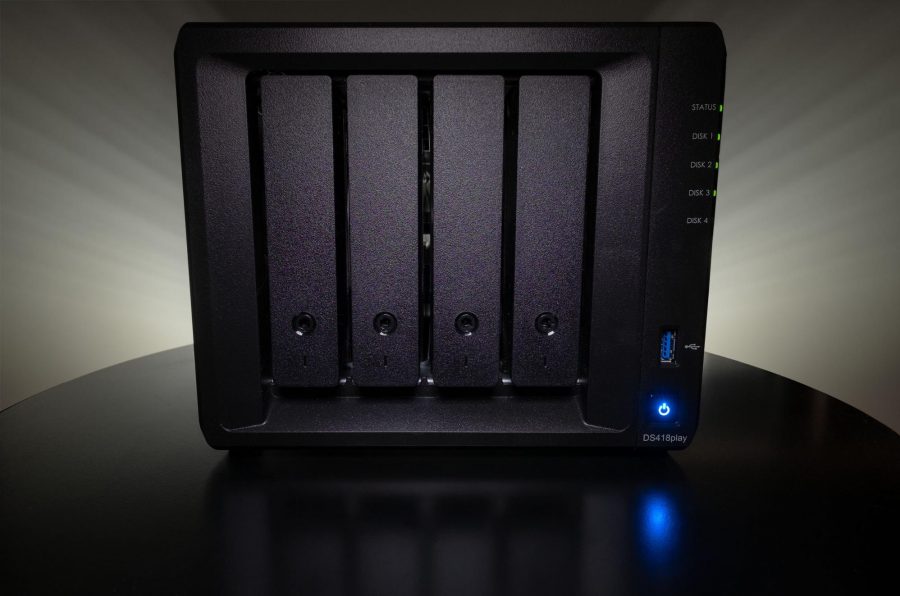 For many years, I’ve used an old Mac mini connected to a large external hard disk as a general-purpose network server. It was where all my music and movies were stored, but it also served as overflow storage and an occasional testbed for beta software. It has worked, mostly, but has always felt clumsily patched together. As my storage needs increased, and as I was preparing to write my book Take Control of Your Digital Storage, I realized I needed something more robust, like a NAS (network-attached storage) device.

When I asked a technical friend for his opinion on which kind of NAS to buy, his response mirrored mine (and perhaps yours, too). He had been thinking about getting one, but the sheer number of variables involved kept him from making a purchase.

A NAS itself typically looks like an unassuming largish box, sometimes containing just a single drive, but more often with two or more drive bays into which you insert bare hard drives or SSDs, making it possible to upgrade the overall storage over time by using higher-capacity drives. What makes it special is that it’s also a computer in its own right, with a processor, operating system, and RAM to handle all its tasks.

The NAS connects to your local network via Ethernet cable, making it available to everyone else on the same network. And in many cases, you can access the NAS when you’re outside the local network. If you arrive somewhere with your laptop and realize that an important file isn’t on your computer’s internal disk (or even if you’re on the couch downstairs and the file is on the NAS in your home office upstairs), it’s no problem; that file is available just as if its drive was directly connected to the computer.

Several vendors sell NAS units, such as Synology, QNAP, Drobo, and WD. And among those, you’ll find models designed for personal use, for small offices, and for industrial applications.

If you think hard drive specs are eye-glazing, wait until you wade into the technicalities of NAS devices. Price is always a consideration, and some manufacturers mix and match components to hit price points—a unit might have four drive bays instead of two, for example, but use an older processor and offer less RAM. But that also means you can likely find something in your budget that performs the tasks you need.

Before we step through the features themselves, let’s consider the reasons to use a NAS instead of a standard external hard drive. Some common reasons include:

I’ve arranged the following specs based roughly on their importance, although you may have different priorities, like hardware transcoding for streaming movies.

Packing more drives into a NAS gives you more storage, but there’s more to it than that. A two-bay NAS sounds like a good starter, and it’s certainly affordable. But remember that a typical NAS RAID configuration is set up with one drive for data and the other for redundancy—RAID 1 in a two-bay model.

With a four-bay model, you could instead add two more 4 TB drives (which cost less per terabyte than 8 TB drives) to fill out the slots and end up with 12 TB of usable storage and 4 TB of protection in a RAID 5 configuration (or similar proprietary setup) for greater data redundancy and failure protection.

(In a four-drive RAID 5 configuration, redundancy comes not from mirroring, but from recording parity information—small bits of extra data that are added when copying files to ensure that the operations were successful—which is why you have more usable storage compared to redundant storage in this scenario.)

If you’re unfamiliar with how storage and RAID levels interact, check out Synology’s RAID Calculator. Even if you don’t end up buying a Synology NAS, it’s helpful to spec out how various drive capacities work under different RAID levels. 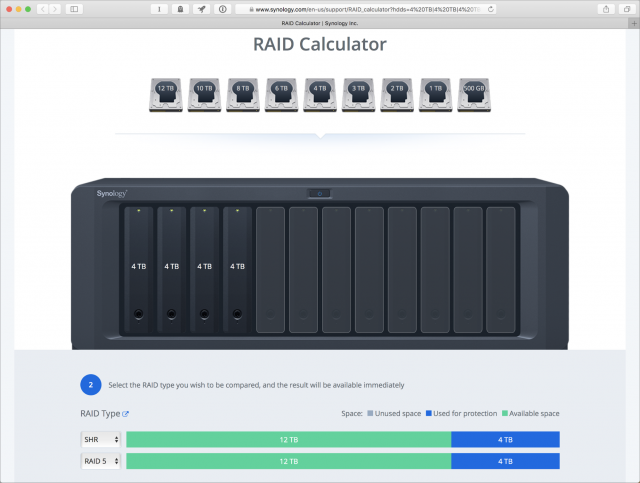 The “network” part of network-attached storage comes from connecting via Ethernet. In most models, that refers to Gigabit Ethernet (GbE), capable of theoretical transfer speeds of 1 Gbps (gigabits per second). Some more expensive models provide 10 Gigabit Ethernet (10 Gbps) connections. Faster is always better, but consider that the iMac Pro is currently the only Mac that supports 10 GbE directly; you can buy adapters to achieve those speeds with Thunderbolt 3-equipped Macs. Also, 10 GbE networks require Ethernet switches that can handle the speed. My recommendation is that if you think you’ll want 10 GbE in the future, buy a NAS that either has 10 GbE built in or available as an option; some NAS models include PCIe expansion card slots that accept such upgrades.

Another Ethernet-related consideration is how many ports are included. NAS models with two or more ports offer a feature called link aggregation. When connected to an Ethernet switch that supports LACP (Link Aggregation Control Protocol), the NAS can balance the data between Ethernet ports to avoid a bottleneck. If multiple computers on the network access the NAS frequently, link aggregation can improve network performance among them. It does not, unfortunately, double the amount of data that gets fed to a single computer, so you won’t see a speed benefit in that case.

Since a NAS is a full-fledged computer, not just a dumb hard drive, it requires a processor to run the software and manage storage. For most uses, the type and brand of CPU don’t matter, as they can all serve files well. The CPU specifics become relevant when encrypting data or transcoding video to watch on devices that don’t support that resolution.

As with any computer, the more RAM a NAS contains, the more capacity it has to accomplish its tasks. You’re not running Photoshop on it, but more RAM helps when the unit is handling multiple simultaneous connections, encrypting data, and other duties. Look for a model that you can expand with more RAM. Even if you don’t max out the memory when you buy it, you can upgrade it later.

A NAS is designed to run continuously, so check how much energy it requires both under normal operation and when drives are in low-power or hibernation mode. For example, the Synology DiskStation DS418play (the model I purchased) supposedly uses 29.01 W during access and 10.59 W when in its disk hibernation mode. For a current Mac mini, by contrast, Apple specs its power usage as 85 W for “maximum continuous power” and an idle usage of 6 W, so it’s likely that it would average higher than the DiskStation DS418play based on what the Mac is doing.

If it’s essential that your data remain encrypted while stored on the NAS, look for a model that offers hardware encryption. You can still encrypt data without this feature, but doing so requires more CPU power and is slower than dedicated encryption hardware. Reading and writing encrypted data involves a decrease in performance overall, but some hardware assistance is preferable to none. Also, check whether the NAS you’re considering encrypts data at the volume level or just at the folder level.

If you’re planning to host your audio and video libraries on the NAS and stream the content to computers and devices on the network, consider buying a model that supports hardware transcoding. This feature more quickly converts high-resolution video files to versions that are optimized for the destinations. For example, let’s say you capture a 4K movie file using an iPhone X: when viewed on a 1080p HD television, the NAS streams a transcoded version suitable for that device, discarding the overhead of the 4K resolution data.

Plex, a popular software system for streaming media, uses only the CPU in a NAS for processing, so hardware transcoding isn’t relevant for Plex users. Prioritize the CPU and RAM specs when looking at possible Plex servers.

A NAS that includes more than a single drive uses a RAID scheme to make the disks appear as a single volume. Check to see which RAID levels are supported, in case you want to change them manually. It may also employ its own custom RAID configuration. Synology, for instance, uses Synology Hybrid RAID (SHR), which offers striping and redundancy while maximizing the amount of usable storage. Drobo’s BeyondRAID technology works similarly.

Depending on the model you’re researching, you’ll run into two file systems: the long-standing ext4 and the newer Btrfs, which adds support for snapshots and some low-level data integrity checks.

Normally, a file system isn’t a feature most people need to worry about; I bring it up here because some vendors use Btrfs as a marketing point. Ext4 tends to be a bit faster than Btrfs and has a longer history. Btrfs was designed as a modern alternative that’s more active about preserving data. Think of ext4 as being roughly analogous to the Mac OS Extended (HFS+) file system and Btrfs as the APFS (Apple File System) file system introduced in macOS High Sierra (see “What APFS Does for You, and What You Can Do with APFS,” 23 July 2018). I wouldn’t call Btrfs an essential feature, but you’re likely to be faced with the decision.

There are plenty of other things to note, such as the amount of noise the NAS makes and the operating temperature if its location is in a warm environment. I’m also tempted to add performance throughput to this list—after all, faster performance is better, right? However, manufacturers don’t provide it for all models, and those numbers come from controlled tests designed to come up with the best results. So, by all means, take performance into account, but with a skeptical eye.

Why You Should Buy NAS-specific Hard Drives

Hard drive docks make for an excellent general-purpose storage solution. They connect to your computer and accept standard internal hard drives for backups without being burdened by an external drive’s case, cabling, and power supply. 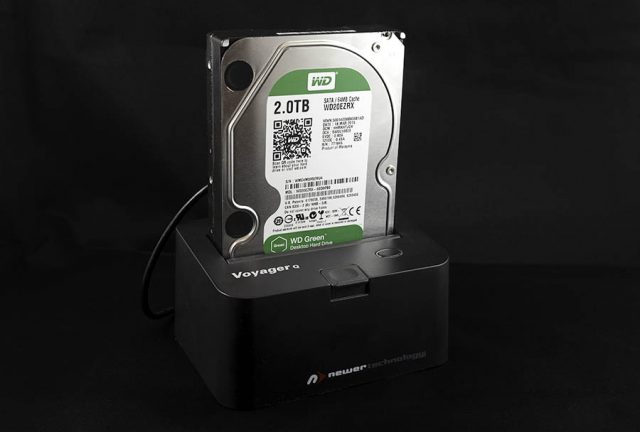 As a result of using such a dock over the years, I have stacks of old drives lying around that were retired when I moved to higher capacities. Wouldn’t it be great to throw them into a NAS and make use of that storage?

It’s a tempting approach, but don’t do it, for three reasons:

Although there are many drive manufacturers out there, my research consistently turned up good reviews of WD’s Red line and Seagate’s Ironwolf line. Both companies also offer “pro” versions that are further hardened for NAS use but are more suited for large enterprise installations.

A NAS can be a versatile addition to your Mac’s storage, but the number of options and specifications when buying one can be paralyzing. Use this article as a reference when doing your own research.

After you’ve added a NAS to your setup, see my book Take Control of Your Digital Storage to learn more about working with files on the NAS, accessing it when you’re away from the network, and more. The book also covers other aspects of digital storage, such as using Disk Utility and First Aid, understanding the APFS file system in macOS High Sierra, and strategies for freeing up disk space.

Comments About NAS: What You Need to Know before Buying