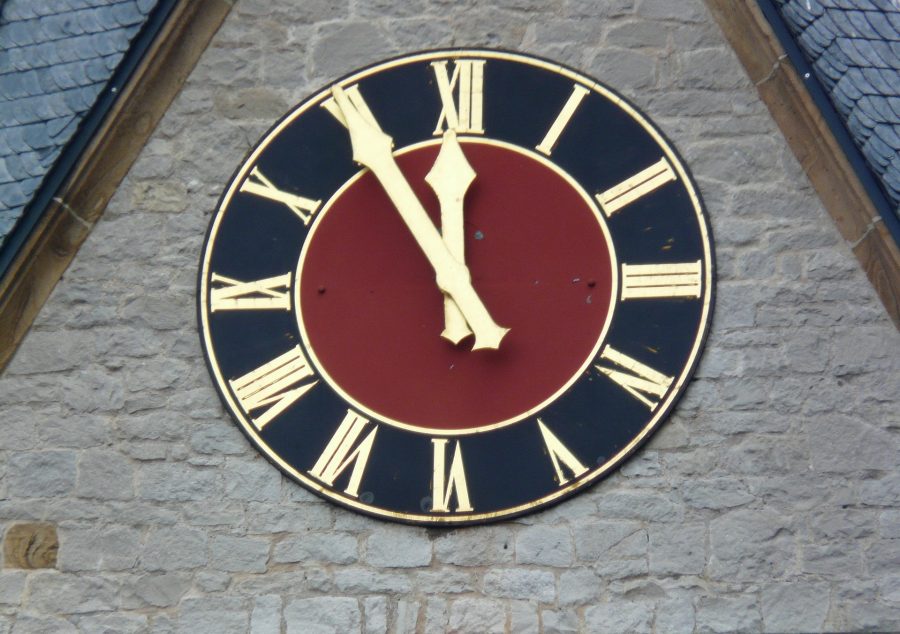 Photo by HardyS on Pixabay

It’s that season again. iOS 12 is likely due next week, making now the best time to take a few minutes to get your devices ready. I’ve been using the iOS 12 betas all summer as I wrote Take Control of iOS 12, and based on my experience, I expect a drama-free update this year. That said, there are some things you always want to do before major iOS updates—if nothing else, it’s a good time to do some housekeeping.

(It’s pretty easy to prepare for an iOS update, but getting ready for macOS 10.14 Mojave, which can’t be far behind iOS 12, requires more effort. Joe Kissell once again has the advice all Mac users need in Take Control of Upgrading to Mojave, and the early access version of Scholle McFarland’s Take Control of Mojave is also now available. In particular, these books cover Mojave’s changes to APFS, new privacy protections, major new features, and more. You can get these books in a bundle with my Take Control of iOS 12 for 35% off.)

Back Up Your Devices

You should be backing up your devices regularly, but if you’ve fallen out of the habit, now is the time to get back on the wagon! Historically, the advice here is, if you’re going to make only one backup, to do it in iTunes. However, we’ve seen problems with iTunes backups of late, and it’s clear that Apple isn’t paying much attention to iTunes these days. So we recommend that you back up to both iTunes and iCloud so if something goes wrong with one backup, you’ll have the other. Both are easy, and the only real downside of either is that you need enough space, either on your Mac’s drive or in iCloud.

Here’s how to back up your iOS device with iTunes:

Note that this process can take a long time, and your device must remain connected to your Mac until it’s finished.

Although an immediate backup to iCloud does not require your device to be plugged in, for automatic backups to occur—which we highly recommend!—your device must be connected to power, be on a Wi-Fi network, and have its screen locked.

There’s only one good excuse not to back up to iCloud regularly, which is not having enough iCloud space to complete the backup. Apple gives all iCloud users 5 GB of free space, but given the capacities of modern-day iOS devices, 5 GB often won’t be enough, especially if you use iCloud Drive. It might be possible to delete enough files to make a backup possible, but it’s much more likely that you’ll need to buy more storage in Settings > Your Name > iCloud > Manage Storage. 50 GB costs $0.99 per month, 200 GB is $2.99 per month, and 2 TB will run you $9.99 per month.

Ideally, you’ll perform this backup step after the rest of the tips in this article, just before you update to iOS 12, but if you haven’t backed up recently, the sooner the better!

If you update your apps manually but haven’t done so for some time, it’s a good idea to do so now. Keeping your apps up to date helps avoid security and compatibility issues, and you don’t want to be updating everything on the same day as iOS 12’s release because Apple’s servers will undoubtedly be slammed.

Frankly, so many apps get frequent minor updates that attempting to manage this process manually is more work than it’s worth. I highly recommend enabling automatic updates, which you can do by turning on Updates in Settings > iTunes & App Store. iOS will start updating apps automatically, and while you don’t get much control over when the downloads happen, you can disable the Use Cellular Data switch in Settings > iTunes & App Store to ensure they take place only over Wi-Fi. And, of course, if you know an update is pending and it hasn’t come in yet, you can kickstart app updates by opening the App Store app, tapping Updates, and tapping Update All. 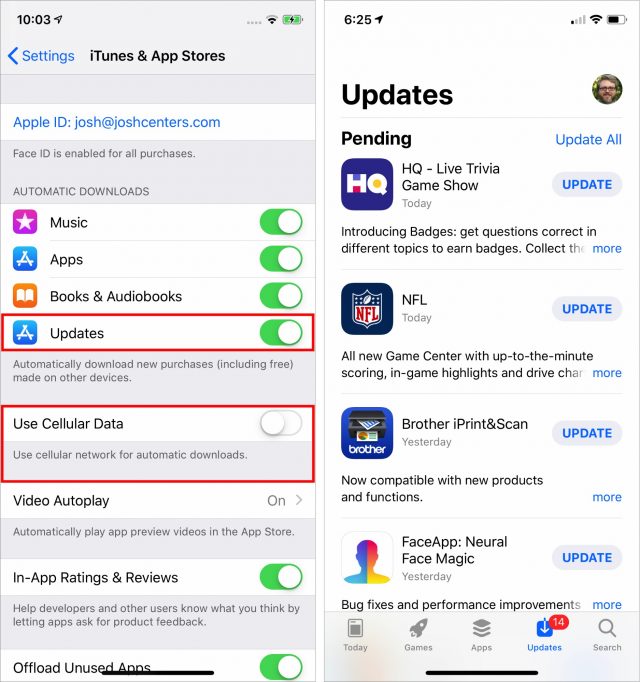 If your device lacks sufficient free space to install iOS 12, the installer should be able to clear enough space automatically during the installation by offloading apps and bringing them back afterward. Nonetheless, it’s worth spending a few minutes to review what’s taking up space on your device and clear out any cruft. You’ll want about 2 GB free to install iOS 12 without any fuss.

Fortunately, iOS makes clearing space easy these days. Go to Settings > General > iPhone Storage. (Or iPad Storage. Or iPod Storage. I hate these device-specific settings names.) You’ll almost certainly see a list of recommendations that you can trigger with a tap to free up storage space. iOS also provides a handy chart at the top of the screen to show what’s eating up space. Apps, music, movies, and photos are common culprits. 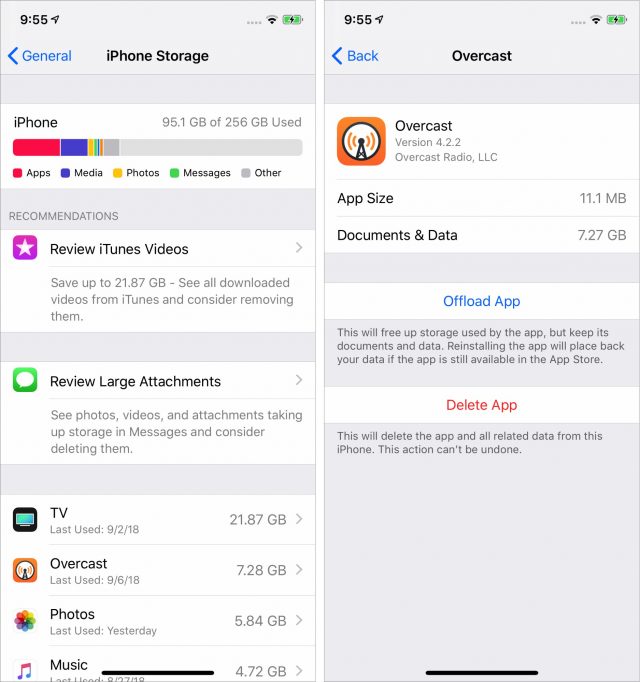 The best way to free up space quickly is by deleting unwanted apps, particularly those with a lot of data, like podcast apps you don’t use anymore. You can do this from the Home screen, but the iPhone Storage screen lists your apps in the order of how much space they consume, and tapping them gives shortcuts for deleting or offloading apps. Offloading an app gets rid of the app, but keeps its data, so you can later download the app again and pick up where you left off.

In Take Control of iOS 12, I have an entire chapter on data management, including managing space on your device, handling bandwidth usage, and juggling iCloud storage.

Opt Out of the Beta

If you’re using the iOS 12 beta, you may think you’re as prepared as you can be. However, unless you want to stay on the beta track, which may be more confusing than it’s worth after the official release, you’ll want to delete the beta profile so you get regular updates instead of beta updates. To do so, go to Settings > General > Profile > iOS 12 Beta Software Profile, and tap Remove Profile. 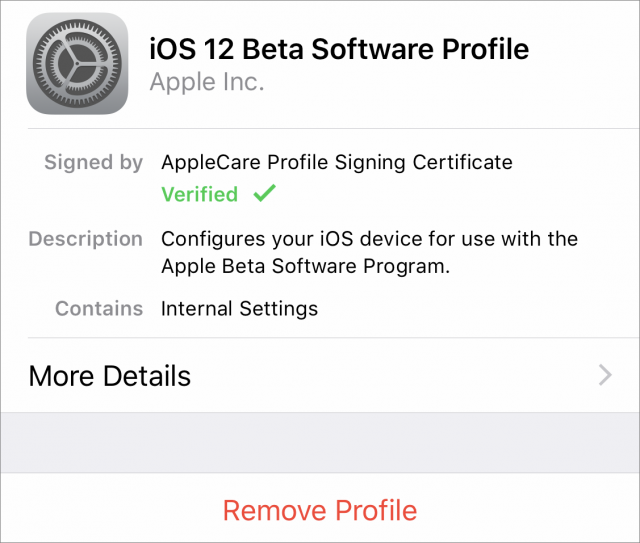 In my experience, the ideal time to hop off the beta bandwagon is sometime after you install the golden master, which is often identical to the shipping version of iOS, but before the official release comes out. That way you can be relatively sure you’re using the release code without having to struggle to download the shipping version on launch day. And you’ll get the inevitable point updates that follow soon after.

Follow these steps before you install iOS 12, and your installation should go smoothly. And if it doesn’t, you’ll have no problem erasing your device and restoring from your backup.

Comments About Get Ready for iOS 12 by Backing Up, Cleaning Up, and Updating Apps