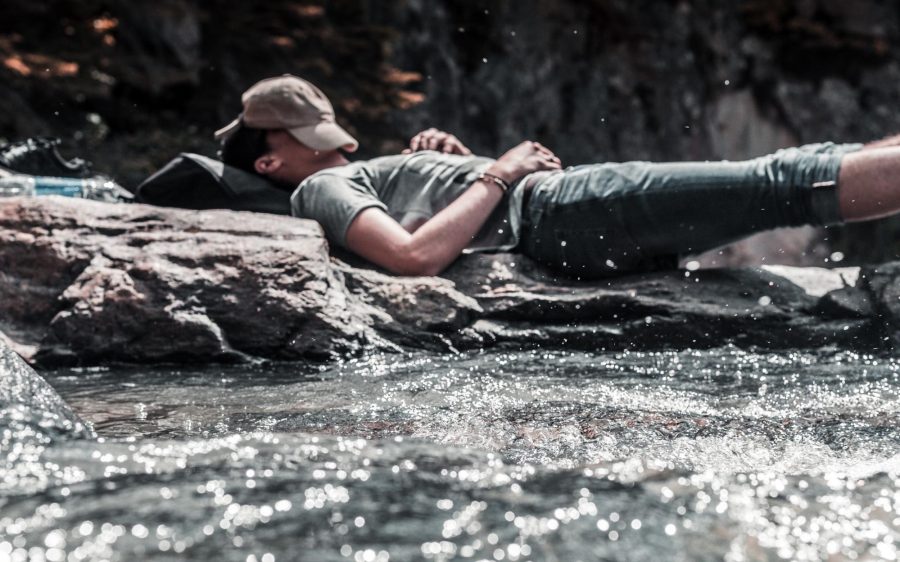 Apple’s enhancements to Do Not Disturb (DND) are among the most welcome changes in iOS 12, in large part because they make DND work the way many of us have wanted since the feature made its debut in iOS 6. There are two main improvements: an automatic end to manually invoked DND sessions and a Bedtime mode that holds notifications until you’re awake in the morning.

As a reminder, DND silences phone calls, alerts, and notifications while your iOS device is locked (or, optionally, at all times). Alarms and timers set in the Clock app continue to work normally even when DND is active. You can allow phone calls from certain groups of people to break through the DND cone of silence, and a Repeated Calls switch lets anyone break through by calling a second time within 3 minutes.

Those features of DND haven’t changed at all, so let’s look at what’s new.

One of the core problems with DND is that manually invoked DND sessions in previous versions of iOS don’t end at a reasonable time. If you have DND scheduled for 11 PM to 8 AM, for instance, a manually invoked DND session at any time during the day won’t end automatically until 8 AM the next day. Forget to turn DND off after your 10 AM doctor’s appointment, and you won’t receive notifications or phone calls until the next morning. It’s even worse if you don’t have a DND schedule. In that case, it’s not clear from the interface that a manually invoked session will ever end.

In iOS 12, you can still turn DND on manually with a single tap on its button in Control Center, and such a session works just as it did in previous versions of iOS, ending automatically when DND disables itself on schedule. However, the big improvement is that you can force-touch or press and hold down on the DND button in Control Center to bring up the DND card, which provides more options. 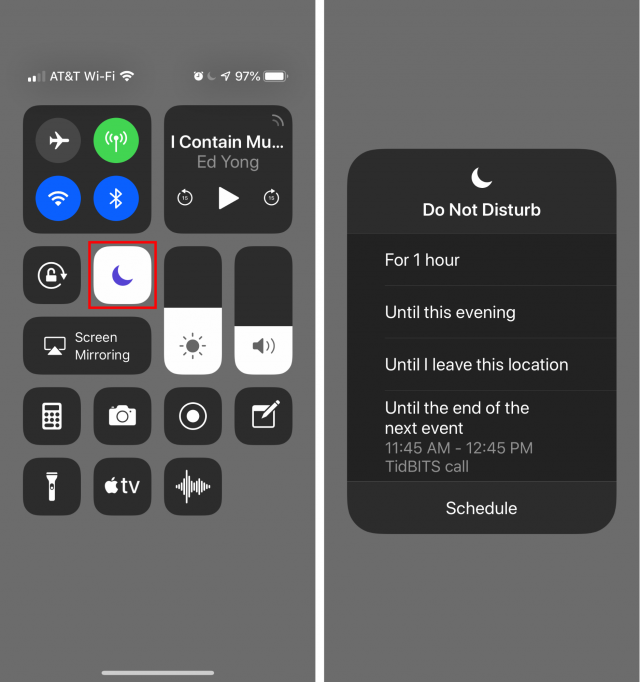 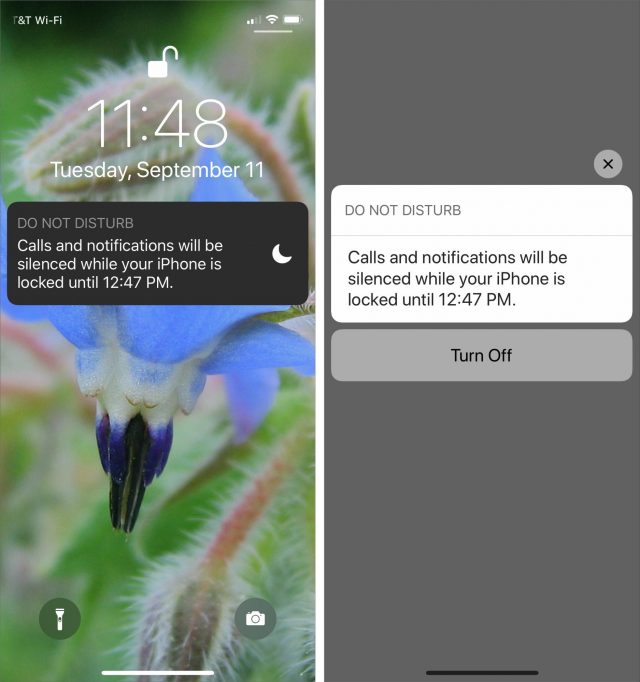 When our son Tristan was in high school, he bemoaned the fact that DND offered only a single schedule, which he quite reasonably used to prevent his iPhone from waking him up at night if friends texted him. He wanted a second schedule that he could use to silence notifications during school hours as well, to ensure that his iPhone would never make noise during a class.

Although iOS 12 doesn’t provide multiple schedules in Settings > Do Not Disturb, you can use the additional options to simulate them. For instance, a high school student in a similar situation could create a “School Hours” event for every weekday from 9 AM to 3 PM, set a weekday reminder to enable DND at 8:55 AM, and select the “Until the end of the next event” option to ensure that DND would turn itself off after the dismissal bell. The “Until I leave this location” option might also work, although it would depend on how tightly it interprets “this location.”

However, if you really want a second DND schedule, these workarounds aren’t necessary, thanks to the next new feature of DND in iOS 12: Bedtime.

Do Not Disturb During Bedtime

iOS 12 adds a new Bedtime switch in Settings > Do Not Disturb. You might think that this is related to the Bedtime feature in the Clock app that aims to help you go to sleep and wake up on a consistent schedule. As far as I can tell, however, it can be entirely independent—until writing this article, I hadn’t enabled Bedtime in the Clock app, and DND’s Bedtime feature worked fine for me before that. 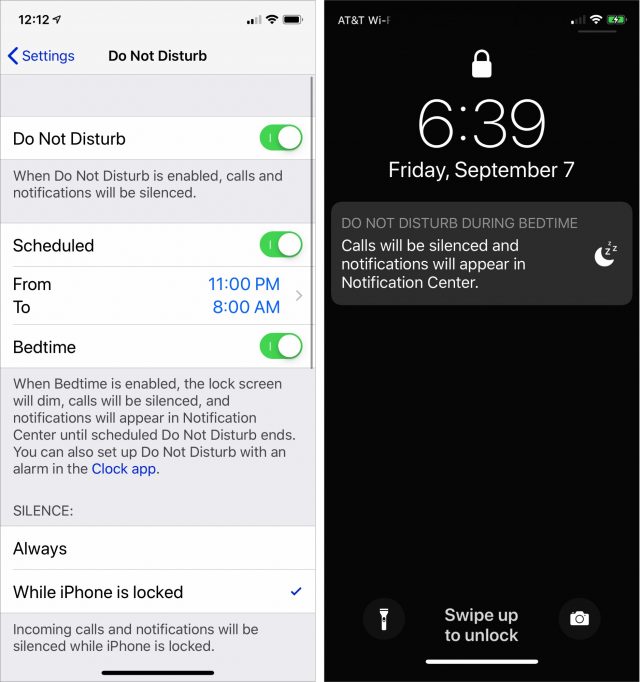 There’s quite a bit of explanatory text underneath the Bedtime switch, which says:

When Bedtime is enabled, the lock screen will dim, calls will be silenced, and notifications will appear in Notification Center until scheduled Do Not Disturb ends. You can also set up Do Not Disturb with an alarm in the Clock app.

The idea behind Bedtime is to reduce the impact of glancing at your iPhone to see what time it is in the middle of the night. Dimming the Lock screen and blacking out the Lock screen wallpaper means it won’t shock your eyes, and sending notifications only to Notification Center means you won’t see a notification that would entice you to use the iPhone and thus ruin your night’s sleep.

As with the manually invoked DND sessions, you can turn off DND by tapping the notification on the Lock screen. That’s helpful if you get up early and want notifications and calls to start flowing in.

This option doesn’t make much of a difference for me, since I tap the bedside table to get my Apple Watch to display the time briefly if necessary, and I can’t remember ever reading a notification on the iPhone before I had the Apple Watch. Nevertheless, the Bedtime feature is welcome, and I’m pleased to see Apple thinking about how it can make iOS devices fade into the background of our lives more, rather than constantly clamoring for attention.

Let’s return to the last sentence in Apple’s explanatory text: “You can also set up Do Not Disturb with an alarm in the Clock app.” This is quite confusing, and as far as I can tell, not precisely true—there are no DND options associated with standard alarms in the Clock app. That’s too bad—a “Disable Do Not Disturb” alarm option akin to the way timers have a “Stop Playing” option could be useful.

However, tapping the “Clock app” link in that text takes you to the Clock app’s Bedtime screen, and if you set up Bedtime there, a Do Not Disturb During Bedtime switch appears in the Bedtime options screen (see “Using the Bedtime Timer in iOS 10,” 7 October 2016). And indeed, DND works with this Bedtime schedule just as it does with its own schedule. 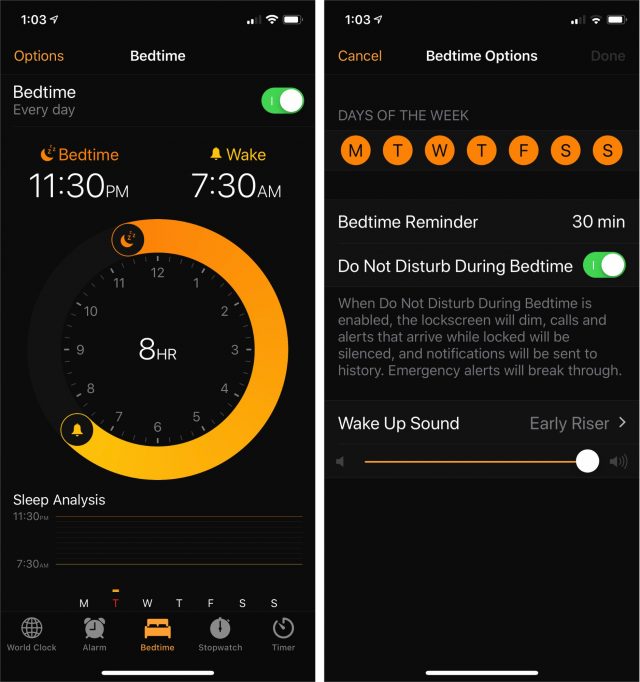 This then is the slightly weak answer to the lack of multiple DND schedules. In my son Tristan’s situation, where he wanted DND enabled during school hours, he could have used the Clock app’s Bedtime schedule to silence notifications from 9 AM to 3 PM and kept his DND schedule at 11 PM to 7 AM. (Using Bedtime for his actual sleeping hours wouldn’t have worked because he wouldn’t go to bed until he was done with his homework, which could go as late as 3 AM, and his sleep schedule on weekends was—unsurprisingly—radically different.)

So there you have it—iOS 12 gives Do Not Disturb new capabilities to turn itself off and tries to prevent iPhones from being lousy bedside companions.

How do you use Do Not Disturb? Or do you use it at all? Let us know in our quick five-question survey.

Comments About Inside iOS 12: Do Not Disturb Learns to Turn Itself Off