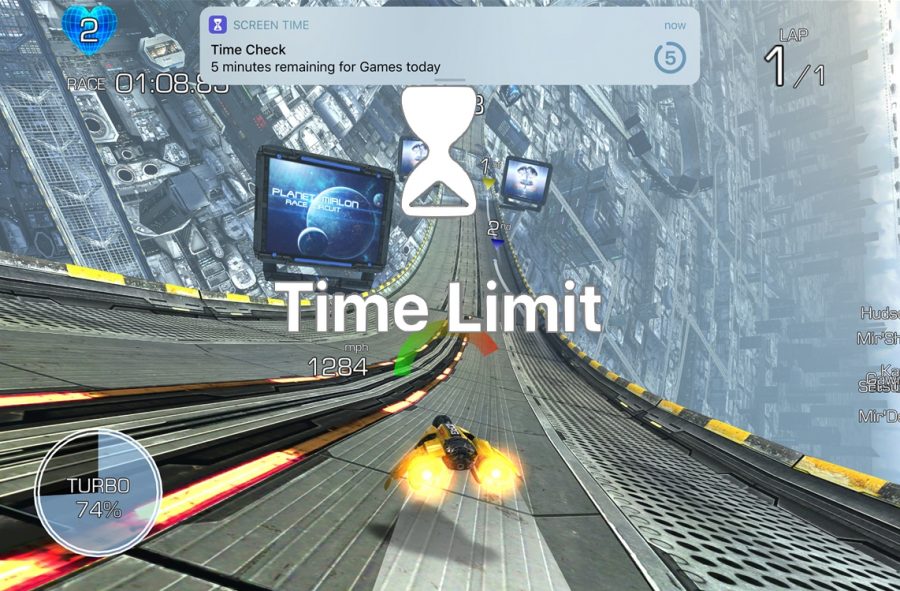 It seems like everyone’s nose is in their phone these days, drawing criticism that smartphones are addictive. To address this concern, Apple has introduced a suite of features in iOS 12, called Screen Time, that lets you see how often you use your iOS devices and control how often you use certain apps. Apple also moved iOS’s parental controls into Screen Time, giving you the capability to see and control (to an extent) the usage of children in your Family Sharing group.

Before I show you how to use Screen Time, let’s clear up a common misconception. Some have said that Screen Time won’t make a difference because people will just ignore its warnings. That’s not the point! Apple isn’t your mother—Screen Time is just a set of tools that help you manage your time.

With that attitude in mind, let’s learn how to use these new tools. For a guide to other new features in iOS 12, check out my book, Take Control of iOS 12.

To get started, turn on Screen Time in Settings > Screen Time. A screen appears telling you everything that Screen Time can do. Tap Continue and you’re asked if the device is yours or your child’s. Choose the former to go directly to Screen Time settings.

However, if you’re configuring your child’s device, iOS 12 walks you through setting up each of Screen Time’s features:

Finally, Screen Time prompts you to set up a Screen Time passcode, which is separate from your device passcode and is required to bypass any of Screen Time’s restrictions. Without a passcode, your child (or you) can ignore all time limits, which somewhat misses the point.

If you’re setting up Screen Time for yourself, you may still want to set a passcode to make you think twice before bypassing your own set limits. Or you could let a trusted partner set the passcode so they can hold you accountable.

You can turn any of these options on or off at any time, so don’t feel compelled to configure them now. And while you can limit a child’s device during setup, you can also limit the device of any child in your Family Sharing group by going to Settings > Screen Time > Child’s Name. More on that toward the end.

Screen Time provides you with a report every week, telling you how much time you spent with your devices and what you were doing. If you have children set up on Screen Time, you’ll also get a report on their usage.

You can also check your usage at any time with the chart in Settings > Screen Time, which shows your total screen usage for the day, along with a breakdown of the categories you’ve spent the most time on.

Tap that summary to see a more detailed graph that shows an hourly breakdown, or, if you switch to displaying the last 7 days, a daily breakdown. With these and other graphs in Screen Time, tap and hold to see specific values at different points in time overlaid on the otherwise unlabeled graph. 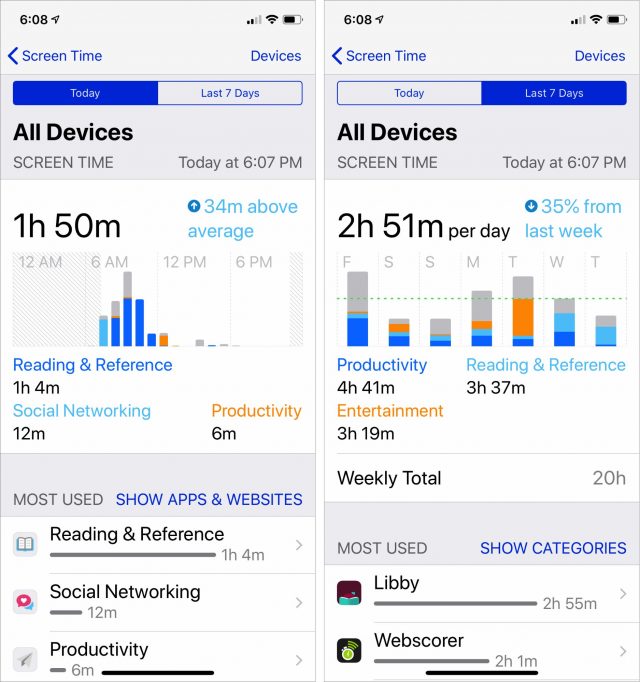 Scroll down to see additional details on your Most Used apps, Pickups, and Notifications:

Observing your device usage is a good start and may be all that many people need, but Screen Time also lets you take it a step further and limit your usage.

Regardless of which limit you’ve set, Screen Time warns you 5 minutes before the time limit expires. When that 5-minute warning runs out, Screen Time puts up another notification saying you’ve hit your limit.

If you want more time to finish something, you can tap Ignore Limit, which lets you ignore the limit for that app or Web site for the rest of the day or for just for 15 extra minutes. If you have a Screen Time passcode, you’ll have to enter it to bypass the limit. On the Home screen, you’ll note that limited apps are grayed-out and have a little Time Limit icon next to their names to indicate you can’t open them. 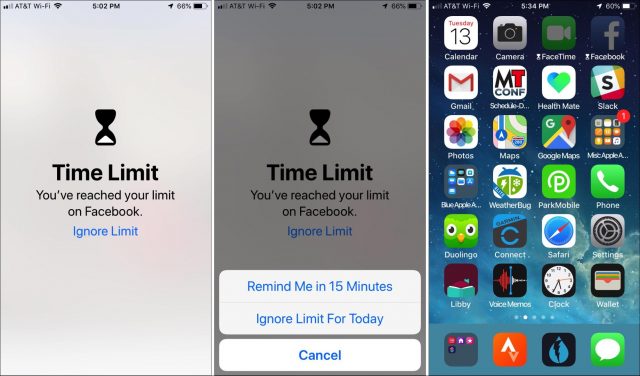 The problem with Downtime and the category-based App Limits is that they can be overly broad, locking you out of an app that’s both innocuous and perhaps even necessary. You can blacklist a particular app, as described above, but you can also go in the other direction and whitelist an app to ensure that it’s always available, regardless of what limit might be in play.

To pick these apps, go to Settings > Screen Time > Always Allowed and tap the green plus button next to desired apps. By default, Phone, Messages, FaceTime, and Maps are always allowed, but you can limit all of those except Phone. You also cannot restrict Clock, Find My iPhone, or Settings. You can’t restrict Safari itself, but content inside Safari is restricted based on your settings.

Kids have already been finding clever workarounds to Screen Time (see “How Kids Are Circumventing iOS 12’s Screen Time Limits,” 21 October 2018), and one way to put a stop to that is to create an app limit for All Apps & Categories and then individually whitelist approved apps. The big downside to this technique is that Apple doesn’t let you add Web sites to the whitelist, so when the Screen Time limit comes into effect, every Web site will be cut off (except apple.com, naturally).

If you’ve set up Family Sharing and enabled Screen Time for it (you can do this in Settings > Your Name > Family Sharing > Screen Time), Screen Time will gain a new Family section that contains the names of all your family members. The first time through, Screen Time will guide you through configuration; subsequently, tapping your child’s name in the Family list will show the full Screen Time interface—complete with the usage graph—for that child’s device. It’s a great way to see what your kids are really doing, without having to be looking over their shoulder repeatedly. And, of course, you can adjust all the Screen Time settings from your device as well.

What happen if your child runs into a limit and needs to keep working? Instead of an Ignore Limit link on the Time Limit screen, they’ll get an Ask For More Time link that requires the Screen Time passcode you set. Once you’ve entered your passcode, you can set the time limit to be ignored for 15 minutes, 1 hour, or the rest of the day. This can take place on the child’s device, or, if you’re using Family Sharing, you’ll get the notification on your iPhone or iPad.

Screen Time won’t replace good, old-fashioned parenting, but I’ve found it to be a useful tool to regulate my own screen usage. I had struggled with time management until iOS 12 made me aware of how much time I spent on social media every day, Thanks to Screen Time, I’ve reapportioned some of that time to exercise, reading, and learning Spanish with Duolingo (see “FunBITS: Duolingo Makes Learning Languages Enjoyable,” 14 June 2013). Hasta luego!

Comments About Inside iOS 12: Manage Device Usage with Screen Time