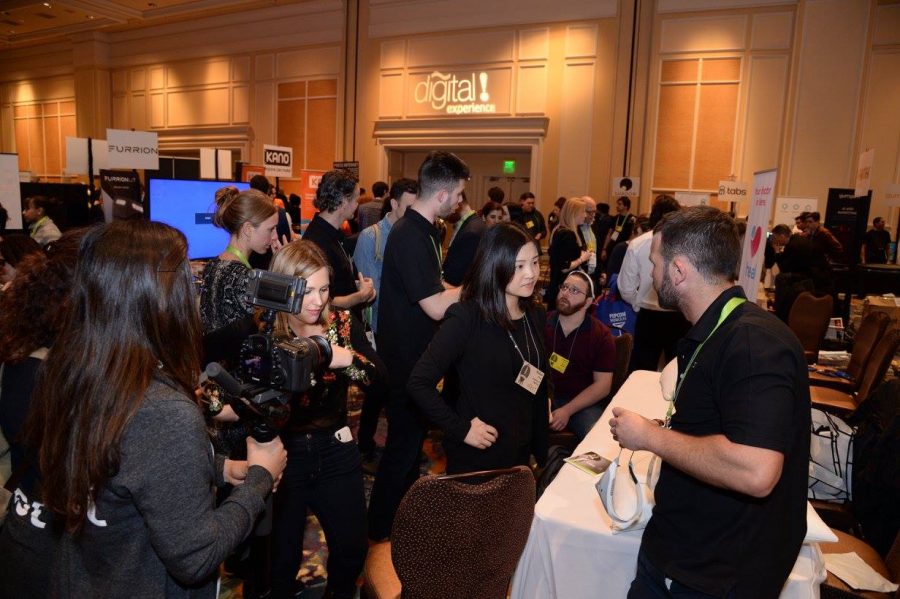 Pepcom Digital Experience is the second of the three breakout shows at the start of CES. The booth that jumped out at me from the advance exhibitor list was a company named Delos, leading me to expect that their demo would be killer robots taking us hostage in the buffet line. Apparently, the company’s lawyers are unaware of the existence of popular TV shows like Westworld. (In real life, Delos is a “wellness real estate” company backed by Deepak Chopra, which was all I needed to know that I wouldn’t find their health claims credible.)

Although the Puppy Cube S comes from a company called Puppy Robotics, it is merely a featureless, non-ambulatory black cube that shows no overt interest in overthrowing humanity. In fact, it’s a “short throw” digital projector, meaning that you can place it just 22 inches (56 cm) away from a vertical surface and it will project a 720p 100-inch display on it. Most such projectors I’ve seen need more space—I can see the Puppy Cube S being useful in conference rooms and such where there is minimal table space next to the wall. As an added trick, if you stand the Puppy Cube S on its end, the projector creates a 23-inch touchscreen display on the table via motion tracking. You can’t use it as a touchscreen for your Mac because the projector doesn’t relay the motion tracking data back to the computer. Instead, the projector runs a custom version of Android and runs apps that process that data. I can’t think of a case where the “project on wall/project on table” options would be useful back-to-back, but it provides an interesting range of choices. The Puppy Cube S will ship in March 2019 for $1299; the existing model, the Puppy Cube, has less memory and no gesture controls, and is currently available on Indiegogo for $899. (Note that the company’s initial campaign raised over twice what was needed, but it has sold only 5 out of 250 units since, sending mixed messages about the future prospects for these products.) 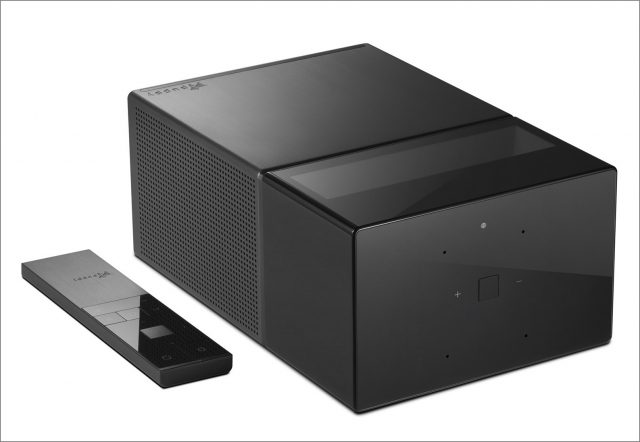 Royole is making waves here with its FlexPai phone that unfolds into a tablet. (Because apparently, mimicking Westworld is the hot trend of 2019.) But I couldn’t get any hands-on experience with the FlexPai at the company’s booth, and initial indications are that I shouldn’t bother. On the other hand, I loved another prototype Royole had for demonstration: a full-sized Bluetooth keyboard printed on a flat piece of plastic that rolled up into a cigar-sized cylinder. (The black plastic base in the photo is part of the booth display, not the keyboard.) Unfortunately, this product has no name, no price, and no release date—even asking those questions caused a bit of confusion. This isn’t the first time we at TidBITS have cheered for Royole’s ideas but been somewhat let down by their products (see “The Dark Side of the Royole Moon,” 25 April 2018), but I’m hoping I can tell you this keyboard is shipping at a future show. 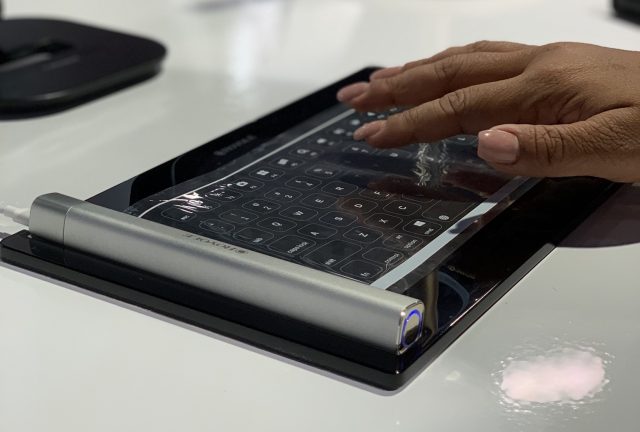 I arrived at Pepcom planning to mock the Hillman Group’s KeyHero—it’s a cloud service for your physical, metal keys!—but the company quickly won me over. The premise is, go to any Home Depot in the US, place your key into the KeyHero scanner, and a digital copy of it will be stored in the company’s cloud service. If you ever lose your key, go back to Home Depot to cut a new one. Better still, if you want to give your key to someone, you can use the KeyHero app to authorize them to cut a new one at Home Depot. The company rep emphasized that the physical key is required for scanning—apparently, a competitor launched a similar service that required only a digital photo, which made it a cinch to steal other people’s keys. What’s not stored in KeyHero’s cloud services: a physical address or any other indication of what the key unlocks, so even if the service’s security is compromised, the information will be worthless to hackers. KeyHero machines are now available at all Home Depot locations, and the company is seeking other partners. The app and cloud storage are free, and the company has a refreshingly simple business model: “We sell keys. We want to sell more keys.” 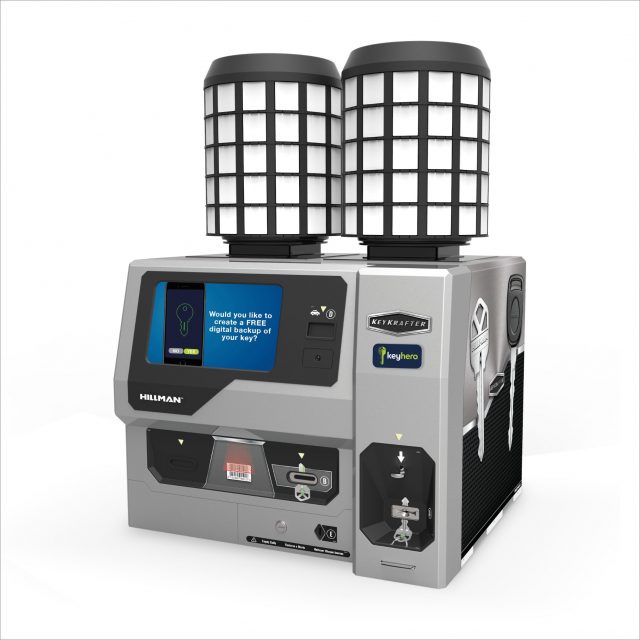 Bluetooth trackers, which tell you where your stuff is, are such a perennial at CES that now they’re an entire product category. But Adero has an interesting spin on the idea: a combination of “tags” and “taglets” that create smart bags. Attach an Adero tag to any bag—it comes with a case that’s backed with adhesive—and a taglet to anything that you want to make sure is in the bag when you dash out. Press the tag, and if it lights green, you’re good to go. If it lights red, a phone app tells you what’s missing. Unfortunately, while the app can tell you where a smart bag is with the same tracker technology you’ll find in other gadgets, items with taglets don’t have the same feature. Tags come with a charger to re-up their batteries, which you’ll need to do every two months; taglets have permanent batteries that should be good for two years. Shipping now, but I’m a little perplexed by how Adero is sold: you can buy a Starter Kit for $119.99 with three tags and three taglets—that’s three bags with one item each, or one bag with three items and the other two tags left unused. Or there’s a Deluxe Kit for $199.99 with five tags and nine taglets. It seems to me that a better model would be to sell the tags in sets but then to allow individual taglets to be added. Adero is marketed to busy executives and parents, and I wouldn’t mind one for my Backpack of Peripheral Holding, but who in the market for something like this has so few items to track? 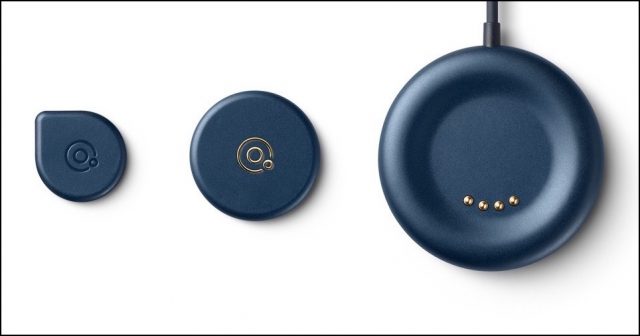 Geolocation description is a surprisingly unsolved system. We’ve had a system of latitude and longitude since the 18th century, but no one can remember the decimal places necessary to describe sufficient precision. We have street addresses, which work well until you arrive in a city where mixing up east for west can put you halfway across town, or rural areas where a single address can describe an area of 26,000 hectares. What3words has a simple trick that solves this: it has divided up the world into 3-meter squares—57 trillion of them—and has assigned each of them a static three-word address (and yes, it works in multiple languages). So if I want to tell you to meet me at a particular local Starbucks, I can tell you which of the eight different stores you should go to, or I can say “meet me at ///couches.arrow.rings”. Or I can wait until I arrive and then send you the grid square corresponding to my actual table—it will be different than the one at the door. One key underlying premise of the system: for any address you speak aloud to a human or a device, What3Words addressing will be easier to understand and harder to confuse—get a word wrong and you’ll know immediately because that address will be in the Sahara Desert instead of 20 miles away. What3words is free to use, and addresses can be looked up in an iOS app or a companion Web site. Obviously, this system is far easier to use when people already understand what it is, so What3words is attempting to license the database for inclusion with other systems—at the show, the company has announced partnerships with Mercedes-Benz, TomTom, AirBnB, Lonely Planet, and Domino’s Pizza, among others. 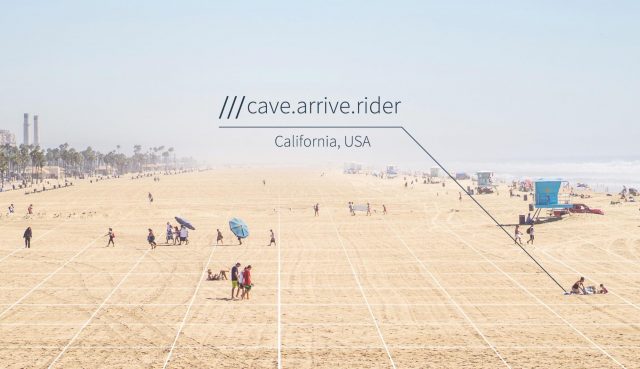 I’m not expecting to still be alive when CES exhibitors start demoing Star Trek holodecks—although I’m happy to be surprised—but magical 3D displays are expected by pretty much everyone here to be a thing someday. It won’t be soon, though, since 3D TVs failed to catch on—they gave me and enough of the buying public a headache and never caught on. In the meantime, there’s HYPERVSN’s eye-catching Solo series of holographic displays. A fan of spinning blades creates the image but moves too fast for the eye to register, so the result is an image that appears to hang in mid-air, with some flickering—think Princess Leia’s holographic message in the original Star Wars. The 3D effect is added with standard 2D rendering, but because the display surface is invisible, it fools the eye. HYPERVSN is available for purchase, lease, or rental, and is clearly intended for the kind of companies who set up trade booths and don’t care much about price—neither the press materials nor Web site deign to mention how much it costs.

Comments About CES 2019: Pepcom Shows Off Futuristic Displays and More