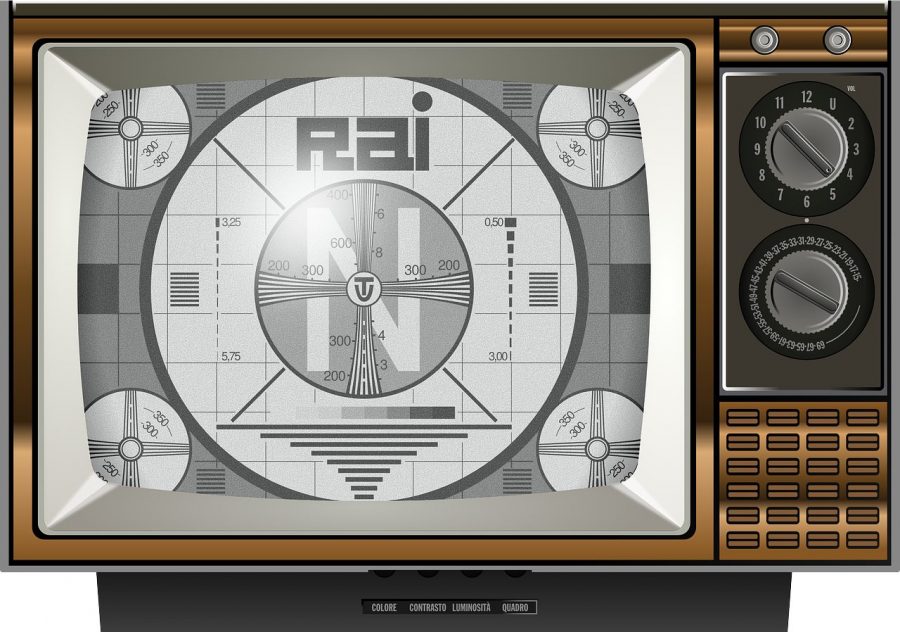 Once upon a time, television signals were something that flitted magically through the air, landing on a laptop-sized cathode ray tube around which an entire family might gather. Assuming you weren’t in the UK (and thus subject to a BBC license requirement), the shows were entirely free of charge—apart from the labor of the child who was forced to adjust the antenna for 30 minutes to get a decent signal.

Then cable television came along, and almost everyone stopped going to the free buffet. Today, around 120 million American households have TV sets, and nearly 100 million of them pay for cable TV—or perhaps I should say “paid” for cable TV because that estimate is a few years old and the number is dropping. Fed up with high bills for hundreds of channels they don’t watch, many people are switching to cheaper à la carte services like Netflix and rediscovering the joys of broadcast TV.

But why can’t you get broadcast channels through a service like Netflix? Broadcast is mostly a world of hardware boxes connected to physical TVs, and not the “buy once, play on any device” model we’re now used to. A company called Aereo tried to put television into our devices in 2012 but was sued out of existence by broadcasters after a couple of years (see “Supreme Court Rules Against Aereo,” 25 June 2014).

Now an organization named Locast is providing a similar service, thanks to a legal loophole: Aereo lost its lawsuit because it resold broadcast transmissions. Locast gives them away for free. So far, broadcasters haven’t shown interest in shutting Locast down.

In short, Locast provides live television broadcasts that you can watch in a Web browser, or through an app for iOS or Android. It’s a nonprofit organization, and there’s no cost to sign up for an account or use the service. Instead, you can make a voluntary donation—the organization’s Web form defaults to suggesting $5 a month, but there’s no obligation to pay anything. This separation of revenue from services is the secret sauce protecting Locast from lawyers.

When you sign up for an account you’re asked which city you live in—Locast operates in only nine cities right now: Baltimore, Boston, Chicago, Dallas, Denver, Houston, New York, Philadelphia, and Washington, DC. When you use the service, you must physically be in that broadcast area or the service won’t work, due again to legal niceties that Locast has to observe. Your location appears to be double-checked against cookies storing past locations—I’ve fiddled with creating multiple accounts and using my VPN service to spoof my location to New York, but I was unable to get that working. (Not that I need to—I’m in Philadelphia, which is supported.)

On the Mac, I haven’t been able to get Locast working with Safari (in macOS 10.13 High Sierra), but it works fine in Chrome. Choose your city again, and Locast directs you to a TV guide showing you what’s on. Here in Philadelphia, I have 15 stations to choose from: the four major networks, several local independents, and a few more in Spanish. You can click shows in the future and past to see their capsule descriptions, but there’s no DVR or on-demand options—the play button shows live TV, and that’s it. It’s understandable if Locast is forbidden to set up recordings to watch later—or if it simply can’t afford the storage space for now—but with a week of TV listed, I’d expect to have some way of bookmarking shows and creating a watch schedule. There could at least be a feature to send email reminders. 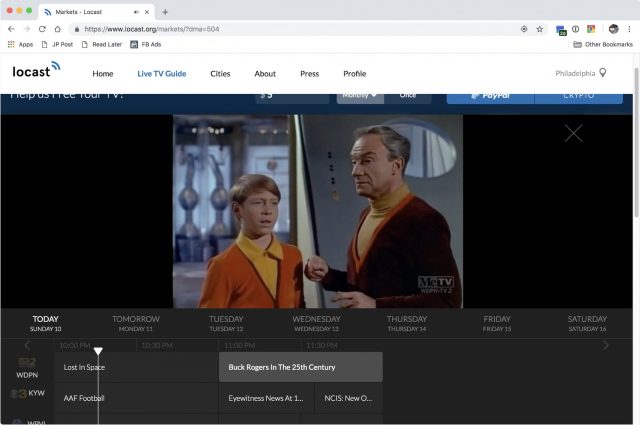 The Web player is what you might call spartan, in that I think it’s what YouTube was like for ancient Greeks. There are two controls: a volume slider and a full-screen switch. There’s no pause, no rewind, no fast-forward (excusable, I suppose, for live TV), no closed captions, and no option to change the broadcast quality. Broadcasts are 16:9 and appear to be at 720p—in full-screen mode on my 13-inch MacBook, fast-moving objects show a little pixelization. When you start playing or switch channels, you’ll see a 15-second pre-roll ad for Locast donations—which isn’t going to change to more annoying commercial advertising, because then Locast would be linking income to a broadcast stream and would get shut down.

The Locast experience is nearly identical on mobile devices—there are both iOS and Android apps—except that there are no controls. While writing this story, I instinctively tapped my headphone button to pause playback—nothing happened. If you want to keep a show from distracting you for a few minutes, you close the app, go back to the program grid, or use the physical volume buttons to mute the show while the video keeps going. (This made me check to see if the spacebar did anything in a Web player. Nope. It scrolls the Web page into the program guide.) I expect these limitations will be a regular annoyance, as I wrote, “there’s no pause button” literally minutes ago and knew it wouldn’t work, but the habit of trying to pause video is deeply ingrained by, well, every other app and Web site.

There’s not much more to say—the Locast service does what it promises, the broadcasts were crisp and reliable in my testing, and I’m sure sports and local news aficionados will jump for joy. Certainly, you can’t beat the price of “whatever you like.” Now if you’ll excuse me, an episode of the execrable but highly nostalgic Buck Rogers in the 25th Century is on. I hope it’s from the one good season.