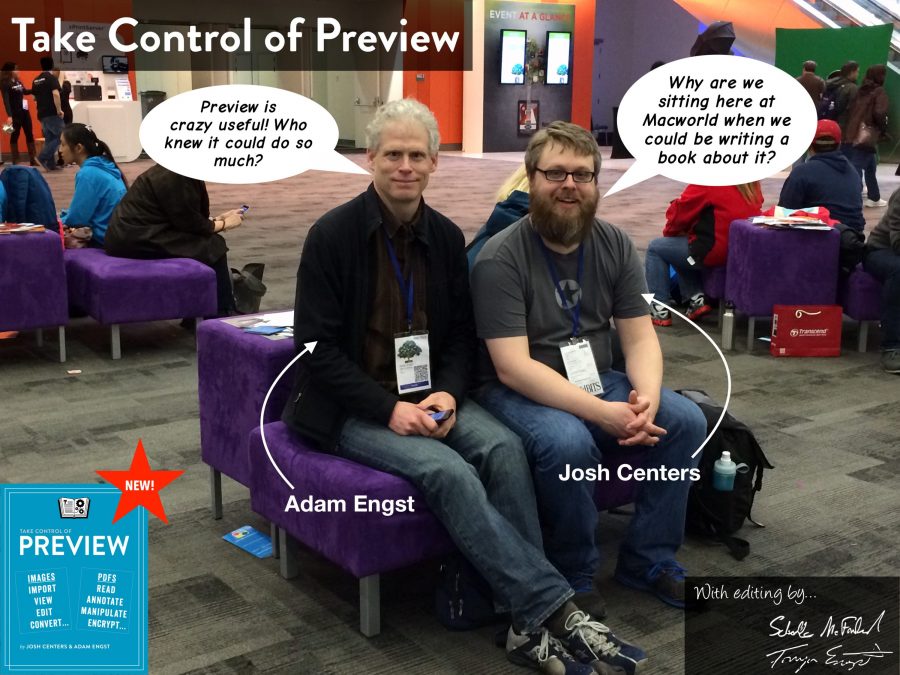 I haven’t done much with Take Control since we sold the business to Joe Kissell in 2017 (see “Take Control Books Acquired by Joe Kissell,” 1 May 2017), but I recently found myself back in the saddle to update Take Control of Preview. Josh Centers and I co-wrote the book about the version of Preview that shipped with macOS 10.11 El Capitan, back in July 2016, and while I have continued to rely on the app every day, not much seemed to change with Preview in 10.12 Sierra or 10.13 High Sierra. When 10.14 Mojave rolled around, however, its Continuity Camera and screenshot features directly impacted Preview, so I decided it was time to do a deep dive and see what else might have changed in Preview.

Unfortunately, the results of my investigation weren’t particularly positive. The new features in Preview don’t add much value, one change is actively bad, and Apple introduced a handful of bugs. 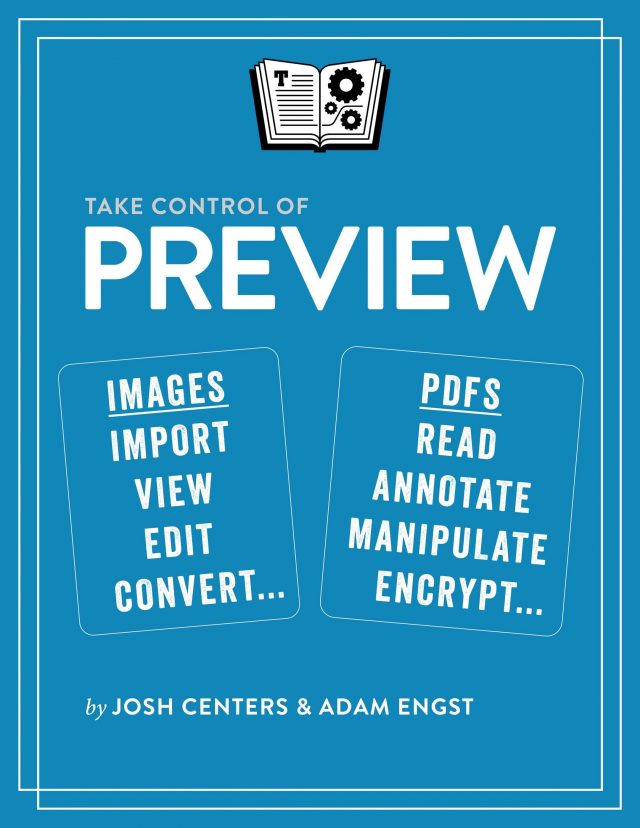 Don’t get me wrong—I still think Preview is a snazzy little app that’s far more useful than most people realize, and I probably use it more than any other Apple app on my Mac (because I prefer Chrome to Safari and Mailplane to Mail). Preview is a surprisingly powerful graphics editor and a highly capable PDF viewer and utility. It won’t compete with Photoshop or Acrobat (or even Pixelmator or PDFpen), but for most of what most people need, it’s entirely sufficient.

The 1.1 version of Take Control of Preview is now out, and if you don’t already own a copy (it’s a free update for everyone who bought 1.0), I encourage you to take a look to learn everything that Preview can do.

The main change in Preview in Mojave revolves around Continuity Camera. Notably, you can now take a photo with your iPhone and import it directly into Preview or use your iPhone to scan a document right into the app. In the book, I added an “Importing from an iPhone or iPad” section to document Continuity Camera.

Similarly, Mojave’s new screenshot interface offers an option to send a screenshot to Preview directly, without first creating a file on the Desktop. I added a section about this as well, although it’s extremely simple—you just choose Preview from the Options pop-up menu in the screenshot control bar. In practice, I haven’t found this option all that useful, since I don’t need to edit most screenshots. Your mileage may vary. 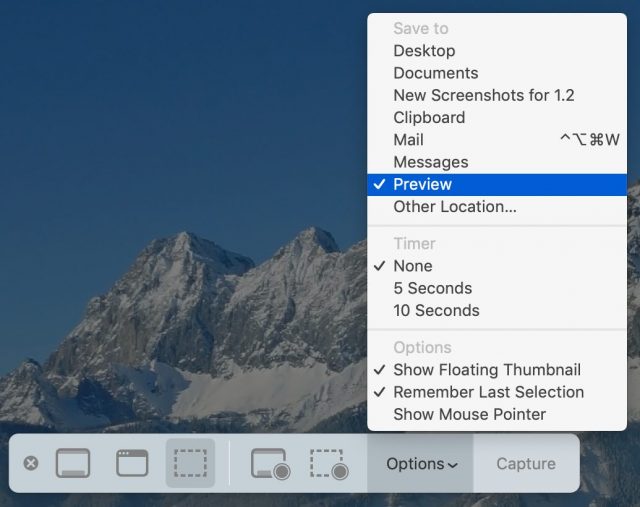 The only other notable addition to Preview, which probably happened in a previous version, is that it now supports the HEIF image format that Apple uses behind the scenes for photos. That’s good but unexceptional.

Unfortunately, these features add little to Preview. You may not have realized this, but Preview could already import photos from connected cameras, including the iPhone and iPad, and it could also already import documents from a scanner. Both of those features remain intact, although the Import From Camera command no longer works with iOS devices. Continuity Camera’s capability to take a photo or scan a document with an iOS device is truly new, though it also works in many other apps. Plus, although it’s nice to be able to open screenshots immediately in Preview for editing, Preview could already take screenshots on its own, which provided essentially the same functionality. Again, those previous screenshot capabilities remain intact.

Finally, Apple removed one feature: the capability to create an animated GIF. That was no great loss—Preview’s animated GIF creation and editing capabilities were simultaneously weak and difficult to use. The previous version of the book covered them but recommended that anyone who needed to work with animated GIFs use a different tool. That entire section of the book is now history.

There is one change in Preview that’s truly terrible, and it had to have been intentional, so I can’t write it off as a bug. One of Preview’s core features is a contact sheet view that displays thumbnails of all open images or all the pages in a PDF (choose View > Contact Sheet). It’s quite useful because you can use it to rearrange PDF pages, batch delete or rotate images, and more.

For inexplicable reasons, Apple changed the thumbnails in the contact sheet view to be square instead of retaining their original aspect ratios. All I can think is that some intern thought Preview would be more hip if it mimicked Instagram (which only started allowing portrait and landscape orientations recently). As a result, PDF pages are squashed, and people in photos look like they’re being reflected in a funhouse mirror. It’s awful and completely unnecessary.

The tricky part of updating Take Control of Preview is that Preview sports a lot of quirky little features and interface niceties. Or at least it did. Every so often throughout the book, as I’d test some feature I thought was uncontroversial, I’d discover that it no longer worked in quite the same way, or, more commonly, that it no longer worked at all.

I’d categorize these changes as bugs, plain and simple. I find them distressing, both because they exist at all and because someone at Apple broke these features while changing code that worked perfectly well before. My best guess is that Apple has been updating Preview’s underlying code to prepare it for a 64-bit future and other under-the-hood changes in macOS. Unfortunately, Apple seems to have assigned such updates to an inexperienced programmer and then failed to test the new code.

Luckily, none of these bugs are show-stoppers. Here’s a list:

As much as it would be nice if Preview didn’t accumulate new bugs for no apparent reason, in an ideal world, Apple would actually add useful features to the program. As always, there’s a tension between Apple improving a bundled app and what that does to independent developers, but a few features here and there aren’t likely to change the calculus of when someone would use Preview instead of buying a more full-featured app. I don’t hold out much hope for Apple ever giving Preview much attention, but it can’t hurt to dream. Here are a few things I’d like to see:

I’m sure many of you have different needs—how would you like to see Apple enhance Preview in the future? Let us know in the comments.