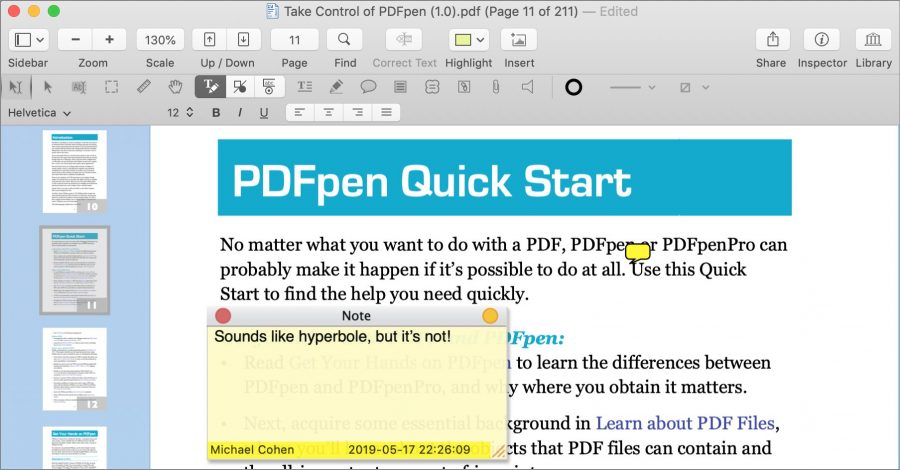 Smile has released new versions of its PDF editing apps for Mac: PDFpen and PDFpenPro. With these apps reaching version 11, both Nigel Tufnel and fans of the versatile utilities may have something to cheer about. The latest iterations offer numerous useful conveniences to PDF-editing users: a new Split View capability, a text-formatting Font Bar, and support for Apple’s Continuity Camera are the marquee features, but the PDFpen apps include other enhancements as well.

(Disclaimer: Smile is a TidBITS sponsor, and I’m the author of the free book, Take Control of PDFpen, which now covers version 11, along with version 4 of the iOS versions of PDFpen.)

The new Split commands let you split a PDFpen window either horizontally or vertically. You can scroll each view separately and magnify each independently. When displaying a split view, PDFpen treats the left view (for vertical splits) or top view (for horizontal splits) as the main view. The other view is read-only, allowing you to compare its contents with the main view. 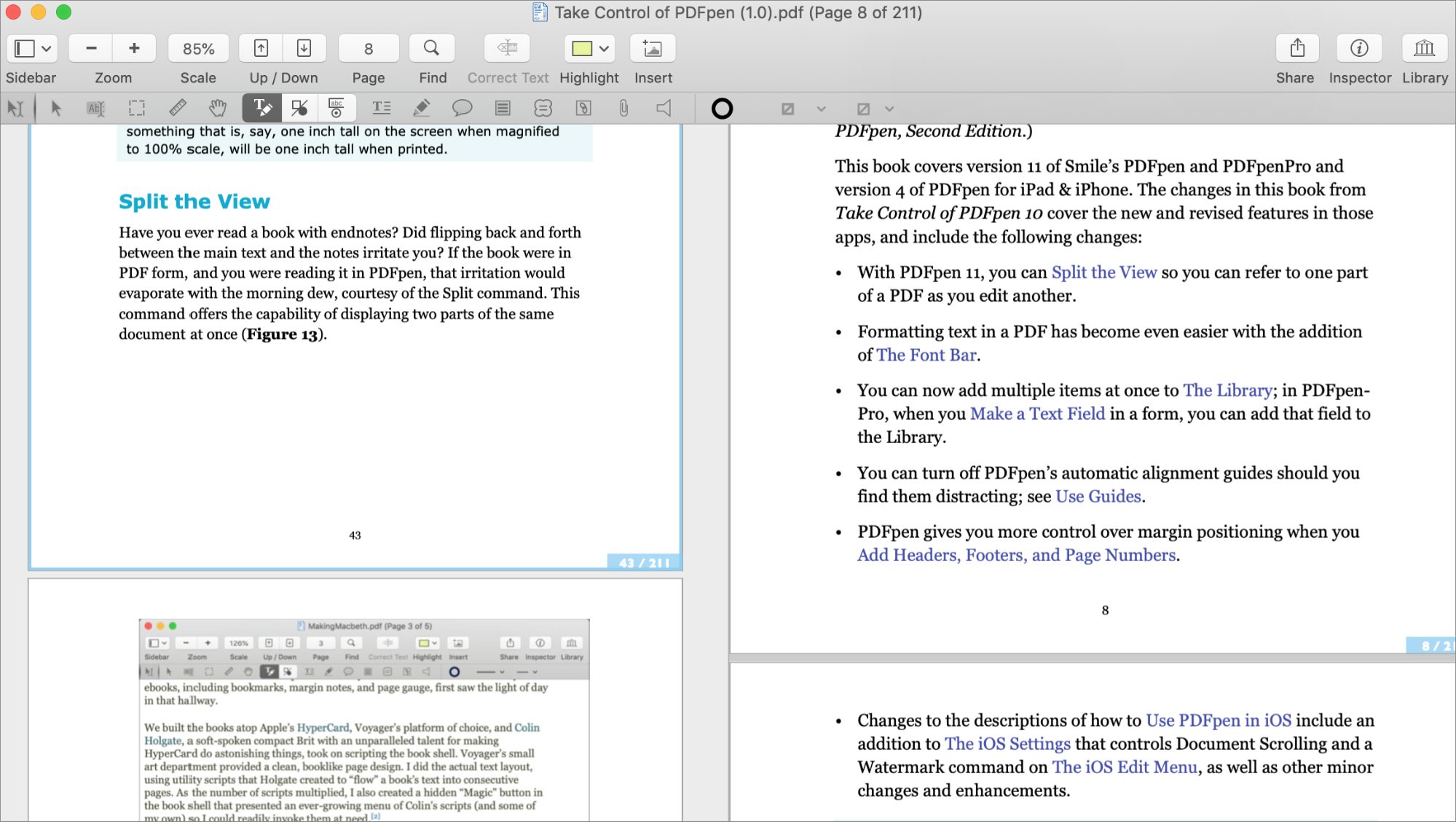 While limiting, this implementation also reduces confusion, as it provides no opportunity for you to accidentally edit the content of the wrong view. Split View is especially useful for those who need to view two parts of a PDF at once. As someone who more than occasionally reads PDFs of academic papers and is constantly flipping between endnotes and the main text, I find Split View particularly welcome.

The new Font Bar extends PDFpen’s Editing Bar downward, adding tools to view and change typeface, type style, size, and alignment. When the bar is showing, you can select any text in a PDF to find out how it is formatted. If you have ever received a PDF and asked yourself, “What font is that?” this feature can answer the question.

In addition, when editing a text imprint added with PDFpen, or when correcting a PDF’s text, you can apply the Font Bar settings to selected text without having to take a trip to the app’s Format menu.

The PDFpen apps also now include support for Apple’s Continuity Camera (see “How to Take Photos and Scan Documents with Continuity Camera in Mojave,” 27 September 2018). If you have a recent iOS device running iOS 12 or later nearby, and your Mac is running macOS 10.14 Mojave or later, you can use your device’s camera to take a photograph and insert it into a PDF on your Mac. You can also use the camera as a scanner: point the camera at a document, set the area to be scanned on the iOS device’s screen, and the device sends the scan to PDFpen on your Mac. Once PDFpen receives the scan, it offers to OCR the images for you. You can scan multiple pages in one go as well.

Although I wouldn’t recommend using Continuity Camera for scanning a novel like Gravity’s Rainbow, it can come in handy in a variety of situations—try running an old vinyl record album through a sheet-feeding scanner to scan the liner notes and you’ll appreciate the convenience of Continuity Camera support.

Speaking of OCR, Smile has added both medical and legal terms to the English OCR dictionary in PDFpen 11, making the apps even more attractive to professionals in those fields.

Other minor but welcome enhancements include:

PDFpen 11 and PDFpenPro 11 are available from both Smile and the Mac App Store, although the 20% TidBITS member discount is available only for those purchasing new licenses directly through Smile. PDFpen costs $74.95 for new licenses and $30 for those upgrading from previous versions; PDFpenPro costs $124.95 new and $30 for upgrades. Upgrades from PDFpen to PDFpenPro are $50. Site licenses, family packs, and office packs are also available. In addition, Smile offers a free download of my book, Take Control of PDFpen, for anyone who is interested in the software or who wants a detailed guide to the apps and their various features.