Apple has opened the doors for public beta testing of macOS 10.15 Catalina, iOS 13, iPadOS 13, and tvOS 13. (watchOS 6 isn’t included, but Apple has started to send out private invitations to the AppleSeed program for testing watchOS.) Anyone can download and install the betas, although you must be signed up with the free Apple Beta Software Program. Remember, these are betas and are almost guaranteed to have problems. Apple is explicit about this fact, saying:

Please note that since the public beta software has not yet been commercially released by Apple, it may contain errors or inaccuracies and may not function as well as commercially released software. Be sure to back up your iPhone, iPad, or iPod Touch and your Mac using Time Machine before installing beta software. Since Apple TV purchases and data are stored in the cloud, there’s no need to back up your Apple TV. Install the beta software only on non-production devices that are not business critical. We strongly recommend installing on a secondary system or device, or on a secondary partition on your Mac.

Let us reiterate that last point—if you’re going to take the beta plunge, make sure to install on a secondary system or device, or, if you’re on a Mac, on a secondary partition. If your drive is formatted as APFS (which it is if you’re running 10.14 Mojave), creating an additional partition is as easy as creating a second APFS volume that you can delete when you’re done with it. Apple even provides instructions for creating a secondary APFS volume on your drive. (For more on APFS’s volume magic, see “What APFS Does for You, and What You Can Do with APFS,” 23 July 2018.)

Be aware that many of the new features in Reminders require a format change that prevents syncing with other copies of Reminders running in Mojave and iOS 12. That includes both your own devices and those of any people with whom you share reminders. Happily, you can put off upgrading your reminders. 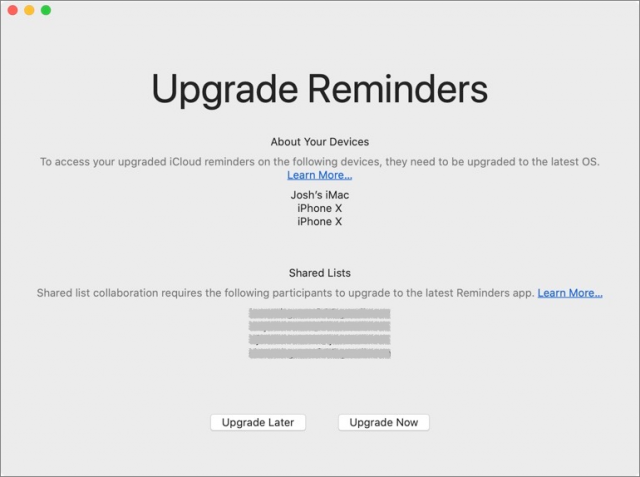 Warnings aside, it can be a lot of fun to test pre-release software. Just make sure that you report any problems you encounter since the entire point of a public beta test is to give Apple feedback about the real world scenarios that the company’s engineers may otherwise overlook. Over at Six Colors, Jason Snell has an in-depth look at the Catalina public beta that will help direct you to some of the new features.