It’s time for another round of operating system updates, with Apple releasing macOS 10.14.6, iOS 12.4, watchOS 5.3, and tvOS 12.4. Surprisingly, the company also released updates to much older versions of iOS—versions 10.3.4 and 9.3.6—to fix a few problems that older iOS devices might encounter.

Normally, we recommend waiting a few days before installing minor updates, but Security Editor Rich Mogull recommends updating to macOS 10.14.6 and iOS 12.4 right away due to the severity of the remote execution vulnerabilities they address. 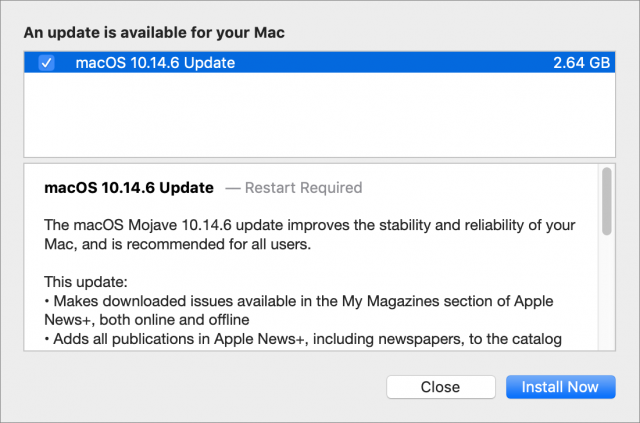 The update weighs in at 2.64 GB, and you can install it using the Software Update pane of System Preferences.

iOS 12.4 provides a new iPhone migration tool that “introduces the ability to wirelessly transfer data and migrate directly from an old iPhone to a new iPhone during setup.” It extends the existing Quick Start feature that helps you set up a new device using an existing one. Apple says you can also connect the devices using the Lightning to USB 3 Camera Adapter and a Lightning to USB Cable, but it’s not clear when that might be preferable.

The iOS 12.4 update offers the same Apple News improvements as appear in macOS 10.14.6:  making downloaded issues available in My Magazines even while offline, adding all publications in Apple News+ to the News+ catalog, and letting you clear downloaded magazine issues.

Many outlets are also reporting that iOS 12.4 adds support for the forthcoming Apple Card (see “Apple Card: More Than Just a Credit Card,” 28 March 2019), but Apple doesn’t mention that in the release notes.

Although Apple very seldom updates obsolete versions of iOS, MacRumors is reporting that Apple has released iOS 10.3.4 and 9.3.6 to fix a problem that impacts GPS location performance and could lead to incorrect system dates and times. If you’re using a device that can’t upgrade beyond one of those versions, the update is likely worth installing after waiting a few days to make sure it doesn’t introduce new problems.

As with previous watchOS updates, watchOS 5.3 enables the ECG app and irregular heart rhythm notifications in more countries, this time bringing Croatia, Czech Republic, Iceland, Poland, and Slovakia into the fold. It also disables accessories with insecure Bluetooth connections, fixes an issue where the numbers on the Explorer face wouldn’t appear for some users, and adds a new watch face.

You can install the 104 MB update using the iPhone’s Watch app—go to Watch > General > Software Update. Once you update to iOS 12.4, you may as well update to watchOS 5.3 too.

Apple has released tvOS 12.4, saying nothing more about its changes other than the usual “general performance and stability improvements.” The company also issued Apple TV Software Update 7.3.1 for the third-generation Apple TVs with the same unhelpful description. It’s entirely possible that the entire point of tvOS 12.4 is to disseminate 14 security fixes.