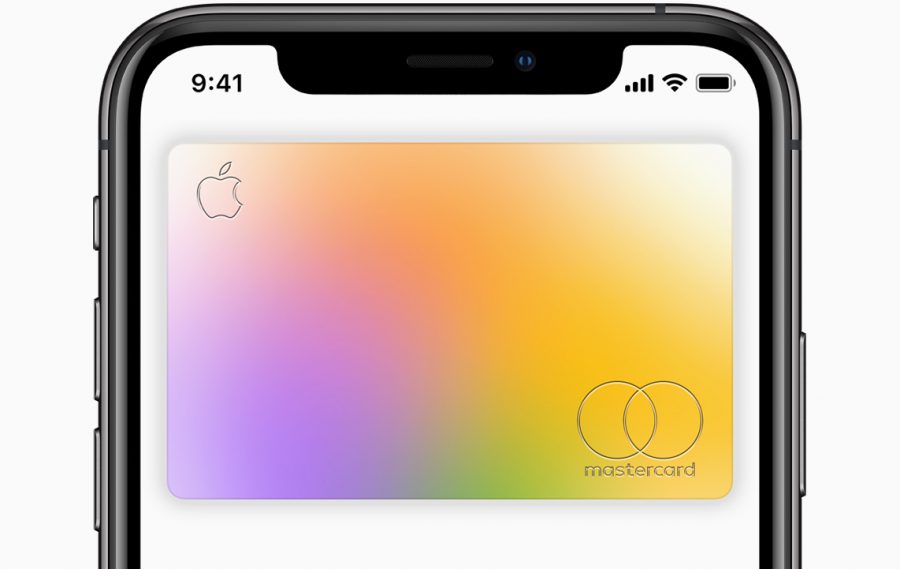 The Apple Card in Wallet.

The Apple Card is now available to every iPhone user in the United States. The company said nothing about when it might become available in other countries.

You can apply by tapping the plus button in the upper-right corner of the Wallet app. Your application is subject to credit approval, but I haven’t heard of many rejections, and some people are being approved for the Apple Card with relatively low credit scores—CNBC had an article about how Apple and Goldman Sachs were dipping into the subprime lending market. If you apply and are rejected, let us know in the comments.

As we’ve noted before, the Apple Card carries no fees, but you’ll be subject to an APR between 12.99 and 23.99%, depending on your creditworthiness.

Once approved, you can begin using the Apple Card immediately through Apple Pay and in non-Apple Pay online transactions. You can find your Apple Card number and other information by opening Wallet, tapping your Apple Card, then the ••• button, and finally Card Information.

In addition to accessing your card through Wallet and Apple Pay, you’ll receive a titanium card in the mail a few days after your approval. If you regularly engage in gunplay with international terrorists, note that it is bullet-proof.

Activation of the physical Apple Card is as easy as tapping a few buttons on your iPhone and placing the iPhone against the packaging, which contains a hidden NFC tag. 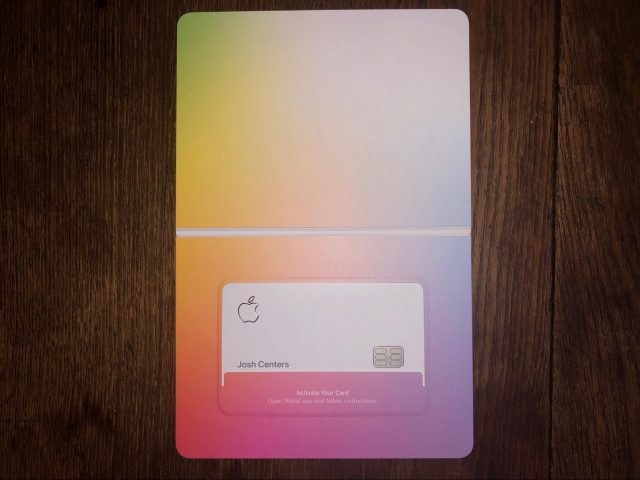 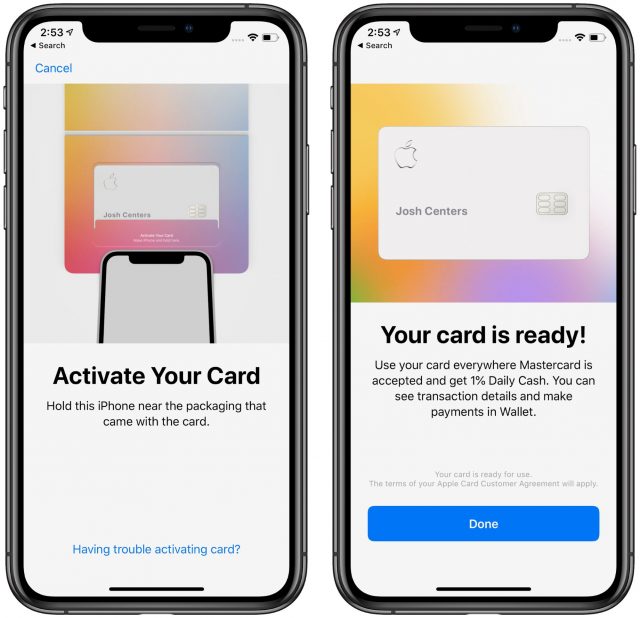 The shiny titanium card is lovely, but Apple advises you to keep it away from other credit cards, leather, and denim. Perhaps your best option for storing the physical Apple Card is to put it in a nice frame on the wall and stick with Apple Pay. Or maybe Apple will introduce a $30 Apple Card case.

Apple Card’s main draw is its daily cash-back rewards, which are as follows:

Additionally, Apple has announced that all Uber services, including Uber ride-sharing and Uber Eats, qualify for the 3% reward. Apple said it “will continue to add more popular merchants and apps in the coming months.”

To further maximize the benefits of your new Apple Card, check out “How to Get the Most from Your Apple Card Benefits” (14 August 2019).

One last tip: You have 90 days from the time you open your Apple Card account to opt out of Goldman Sachs’s arbitration clause, which prevents you from participating in a class-action lawsuit against Apple and Goldman Sachs regarding the Apple Card. It says:

Credit is being extended to you and you are being provided access to and use of your Account on the basis of the inclusion of the following arbitration provision. By accepting this Agreement or using your Account, unless you reject arbitration as provided below, you acknowledge that YOU ARE GIVING UP THE RIGHT TO LITIGATE CLAIMS (AS DEFINED BELOW) AND THE RIGHT TO INITIATE OR PARTICIPATE IN A CLASS ACTION. You hereby knowingly and voluntarily WAIVE THE RIGHT TO BE HEARD IN COURT OR HAVE A JURY TRIAL on all Claims subject to this Agreement. You further acknowledge that you have read this arbitration provision carefully, agree to its terms, and are entering into this Agreement voluntarily and not in reliance on any promises or representations whatsoever except those contained in this Agreement.

The Apple representative will put you in touch with someone from Goldman Sachs in the same message thread. It’s a painless process that takes only a few minutes and lets you retain your legal rights. 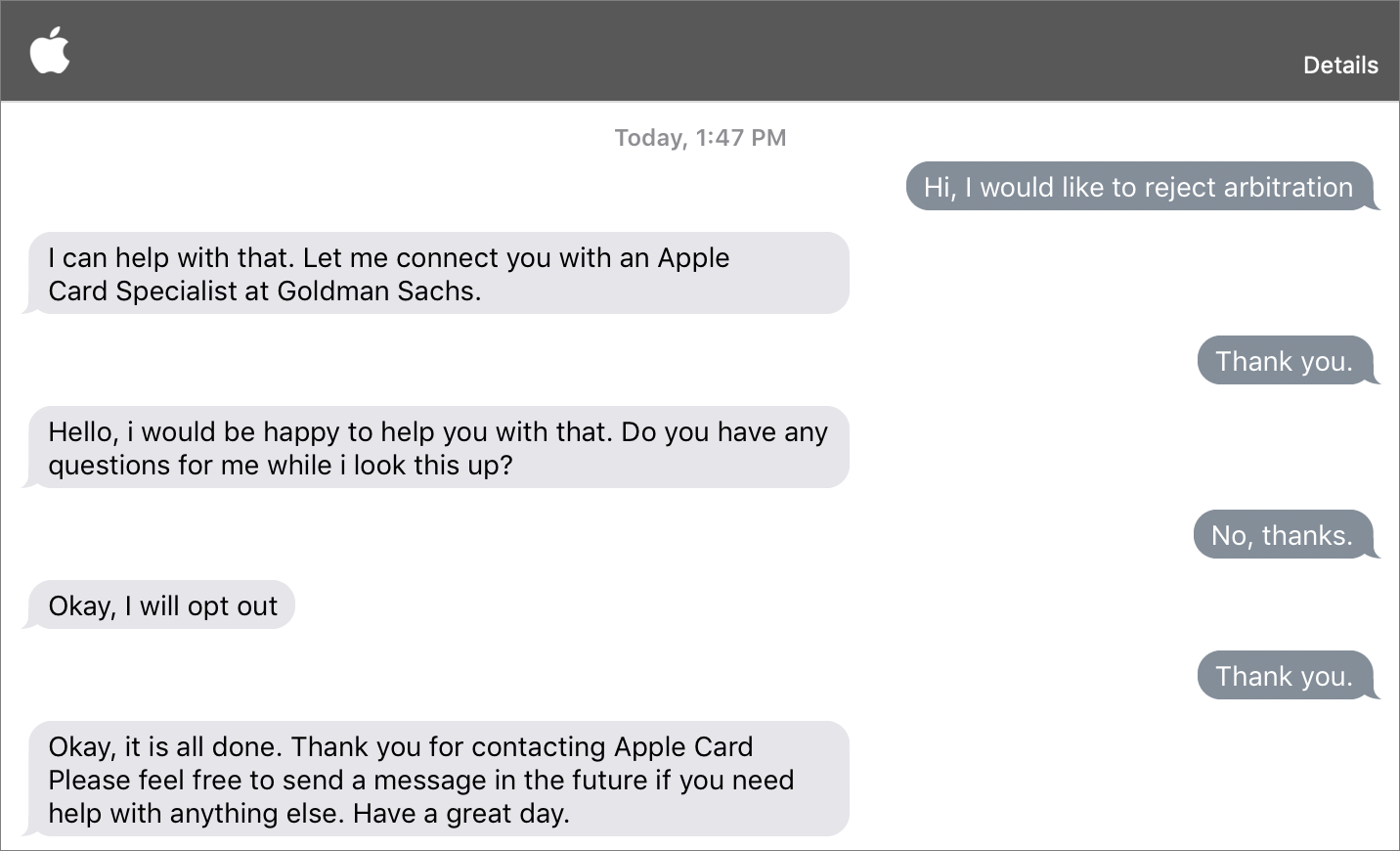 It looks as though TidBITS readers are generally bullish about the Apple Card. In our recent survey (see “How to Get the Most from Your Apple Card Benefits,” 14 August 2019), 67% of respondents said they already had it from the early access program or were signed up to get, and another 21% were waiting to see what others thought. Only 12% of respondents said they had no plans to sign up for the Apple Card.

Comments About Apple Card Now Available to All US iPhone Users