tvOS 13 is here, but the update is sufficiently subtle that you may not even realize you’re running it unless you’ve bumped into the new auto-play videos on the Home screen or one of the bugs that our readers have been reporting. I covered most of what’s new earlier this year in “An Early Look at tvOS 13” (10 June 2019), but an interesting new feature cropped up later in the beta cycle: Picture in Picture (PiP).

Finally! The iPad has had PiP for years, and it seemed like an obvious feature for the Apple TV. Unfortunately, Apple shipped PiP in tvOS 13 with a huge limitation: it works only inside the Apple TV app. In earlier betas, you could start playing a video in the Apple TV app, minimize the video into PiP, and browse around the tvOS interface while watching the video in the tiny PiP window. Likely for the sake of simplicity, in the shipping version of tvOS 13, any video playing in PiP disappears if you return to the Home screen.

Restricting PiP to the Apple TV app limits its appeal, but you might still find it useful. Here’s how to activate PiP:

There are three control buttons in the PiP window. 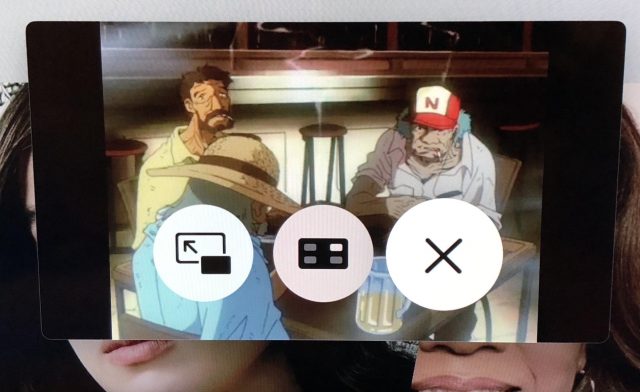 Swipe on the touchpad to highlight one and then click to activate it:

Remember, to leave the PiP controls so you can browse in the Apple TV app, press the Menu button, not the TV button.

What’s interesting is you can start playing another full-screen video in the Apple TV app while playing a video in PiP. Just navigate to it and play it like normal. The full-screen video’s sound will play normally, while the volume will be muted in the PiP video.

You can switch between videos or close the PiP window. Bring up the PiP controls as you did before, by either touching the Siri Remote touchpad or pausing and unpausing the video.

This time there are two buttons:

Given that PiP works only in the Apple TV app, the main use case I can imagine for it is following a sports game in PiP while watching another game or some other show full-screen. But it feels like Apple could make PiP more useful by allowing it to work regardless of what app you’re using.

Are there other good use cases for PiP in tvOS 13? Do you plan to use it? Let us know in the comments.

Comments About How to Use tvOS 13’s Picture in Picture