Apple is continuing its hectic release schedule to deliver promised features and fix bugs in its interrelated operating systems. First came iOS 13.2 and iPadOS 13.2 (see “iOS 13.2 and iPadOS 13.2 Serve Up Deep Fusion, HomeKit Enhancements, and HomePod Features,” 28 October 2019), and now the company has pushed out macOS 10.15.1 Catalina, watchOS 6.1, and tvOS 13.2.

The main commonality between the three is support for the new AirPods Pro (see “Apple Releases AirPods Pro with Noise Cancellation,” 28 October 2019).

Apple should be ashamed of the Improve Siri & Dictation splash screen. The choices are “Share Audio Recordings” and “Not Now,” which implies that you will eventually want to share your Siri recordings—resistance is futile. Would it have killed some marketer to say “Keep Audio Recordings Private” or something similar? Plus, you can change this setting later, but Apple hides it in System Preferences > Privacy > Analytics & Improvements. And no, searching for “Siri” in System Preferences won’t find that preference pane. 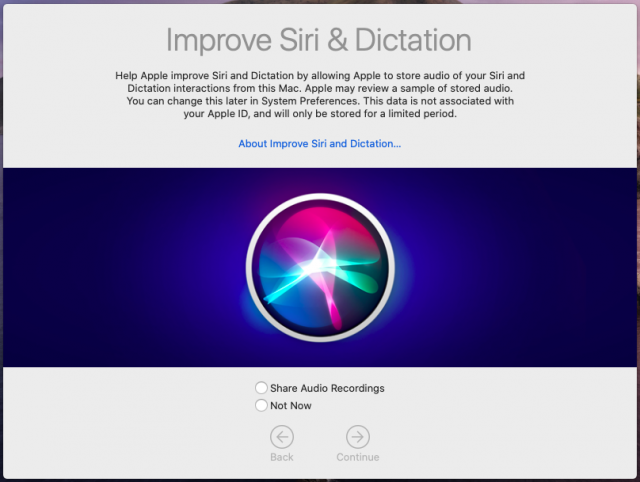 macOS 10.15.1 also restores several Photos features, including viewing file names in the All Photos view and filtering by favorites, photos, videos, edited, and keywords in the Days view. The update also adds a two-finger swipe gesture for navigating back in the News app. 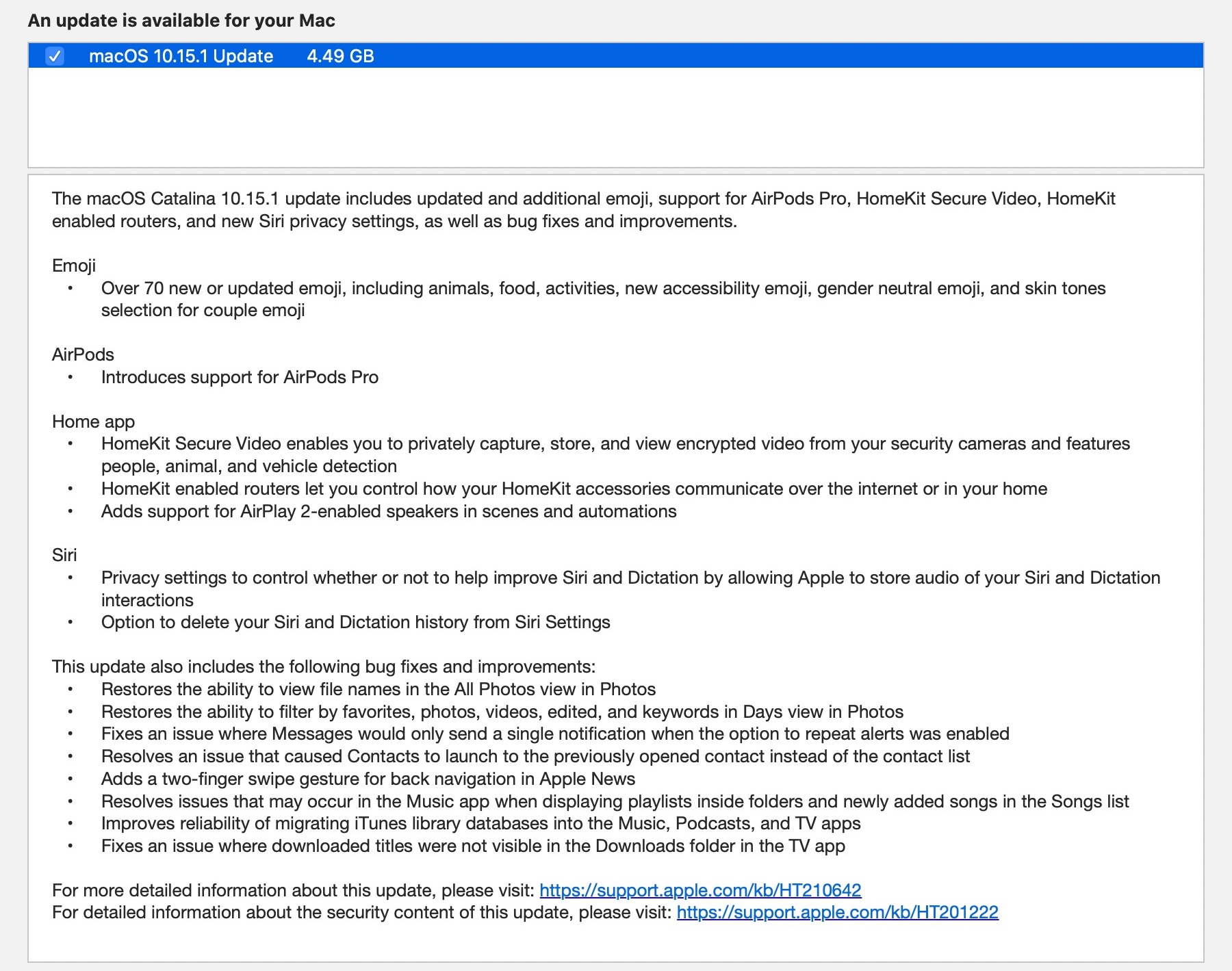 Apple claims that 10.5.1 also fixes a bug that caused Messages to send only a single notification even when repeat alerts were enabled. This mirrors a bug fix in iOS 13.2, but we can’t figure out where in macOS it’s possible to set repeat alerts. Perhaps there’s something we’re missing, perhaps the setting is somehow system-wide to iMessage, or perhaps Apple just made a mistake in the release notes.

The update also reportedly improves the reliability of migrating iTunes library databases from previous versions of macOS into the new Music, Podcasts, and TV apps.

For enterprise users, 10.15.1 fixes a bug that caused passwords with certain characters to be rejected at the Mac login window when using a built-in keyboard with a non-US keyboard layout. It also dims the Sign In button in System Preferences when a configuration profile disallows signing in with an Apple ID.

You can install the 4.49 GB update from System Preferences > Software Update. Beware that it requires more than 18 GB of free space, which may require taking out the trash first, as several of us here at TidBITS discovered.

If you’re still running 10.14 Mojave or an earlier version, we stand by our recommendation that you hold off upgrading to Catalina for now. If nothing else, we’d like to see some indication that Apple has addressed issues with Mail (see “Beware Mail Data Loss in Catalina,” 11 October 2019). 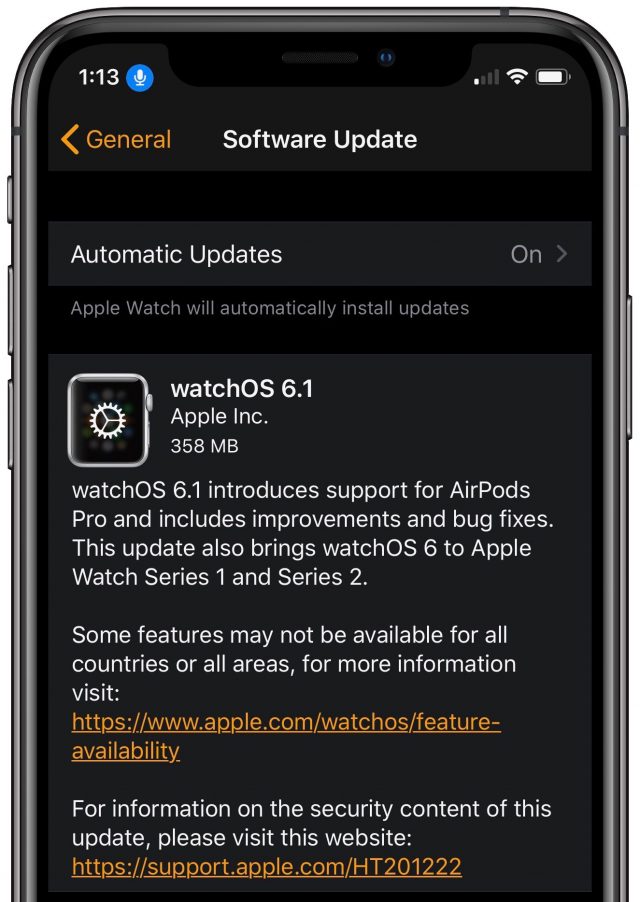 Apple has released watchOS 6.1 with support for the new AirPods Pro. More interesting, however, is the fact that watchOS 6.1 is available for the Apple Watch Series 1 and Series 2. These older models hadn’t been able to update to watchOS 6 before this. watchOS 6.1’s release notes are otherwise minimal, promising the usual “improvements and bug fixes.”

You can install the update—358 MB on an Apple Watch Series 5—using the iPhone’s Watch app—go to Watch > General > Software Update.

Unlike iOS 13, iPadOS 13, and Catalina, we haven’t heard of problems related to watchOS 6, and it adds some niceties like an independent App Store, new watch faces, and noise alerts to protect your hearing (see “A Look at the Health App in iOS 13,” 5 August 2019). So you may as well install the update the next time you charge your watch—it will take quite some time.

If automatic updates aren’t on, you can update your Apple TV HD or Apple TV 4K by going to Settings > System > Software Updates. We can’t see any reason not to let this update install on its own or do it yourself the next time you think of it.