Apple has released iOS 13.2 and iPadOS 13.2, which deliver promised features and fix a slew of bugs. You can install the updates, which weigh in at 597.3 MB on an iPhone X and 534.1 MB on a 10.5-inch iPad Pro, in Settings > General > Software Update, through the Finder in macOS 10.15 Catalina, or otherwise through iTunes.

If you’ve already updated to iOS 13 and iPadOS 13, keep installing these updates. If not, it’s probably worth holding off a bit longer, but we’re getting closer to the point where Apple should have found and fixed the most egregious bugs.

The marquee feature of iOS 13.2 is the promised Deep Fusion for the iPhone 11 models, which uses machine learning to combine multiple camera exposures into a single image with superior image quality and less noise (see “Apple Announces iPhone 11, iPhone 11 Pro, and iPhone 11 Pro Max,” 10 September 2019). Users of those new iPhones can now also change the video resolution directly from the Camera app.

Both iOS 13.2 and iPadOS 13.2 also add delayed HomeKit features, such as HomeKit Secure Video, which lets you securely store security camera footage in iCloud, and HomeKit-enabled routers, which let you quarantine HomeKit accessories from the rest of your network. When Apple first announced this feature earlier this year, the company specified support for routers from Eero, Linksys, and Spectrum, but there was no mention of any of those companies in the release notes (see “Apple Announces iOS 13 and Breaks Out iPadOS,” 3 June 2019). Stay tuned!

Meanwhile, on the Siri privacy front, these updates offer a new setting to control whether Apple stores recordings of your Siri queries and Dictation entries, and an option to delete Siri and Dictation data from Apple’s servers. This change comes in response to the controversy surrounding Apple’s use of contractors to monitor Siri recordings for quality control (see “Apple Announces Siri Privacy Reforms,” 29 August 2019).

The update also squashes a number of bugs that:

Apple has also, at long last, released iOS 13.2 for the HomePod. Although your HomePod should update itself soon, if it doesn’t, Apple provides manual installation instructions. That said, 9to5Mac is reporting that iOS 13.2 is bricking some HomePods, so don’t rush to update if it doesn’t happen automatically. (Adam Engst’s HomePods downloaded the update, but he’s holding off on tapping Update All until more is known about the bricking problem.) 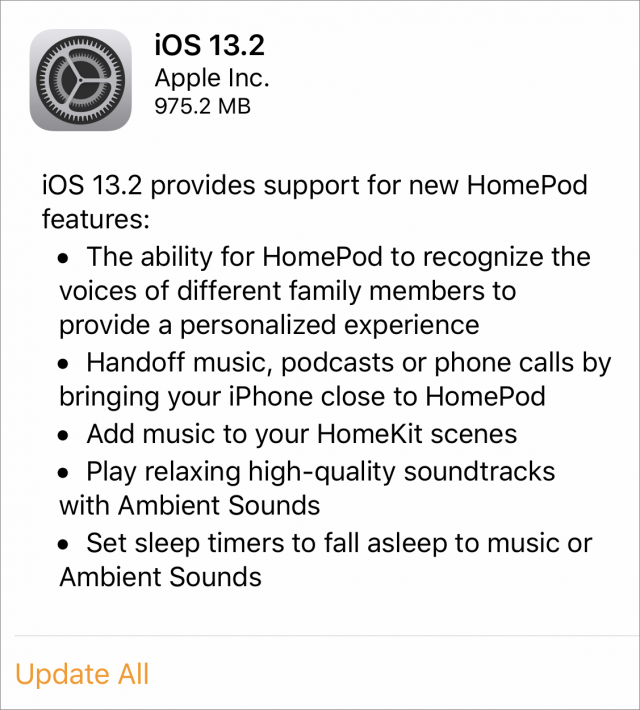 iOS 13.2 delivers the feature many HomePod-using families have been waiting for—the capability to distinguish between the voices of different family members. Until now, only one Apple ID could be associated with a HomePod, meaning that only one person could use Siri on the HomePod to set reminders, make calendar events, and perform other actions that relied on the Enable Personal Requests switch. In theory, this should also allow different people to get personalized Apple Music suggestions.

Here’s what else is new for the HomePod:

Michael Cohen, whose HomePod updated with no problem, tells us that the trick for playing Ambient Sounds is to say something like “Hey Siri, play soundType sounds,” where soundType includes “fireplace,” “forest,” “night,” “ocean,” “rain,” “stream,” and “white noise.” If you discover other types, let us know in the comments. 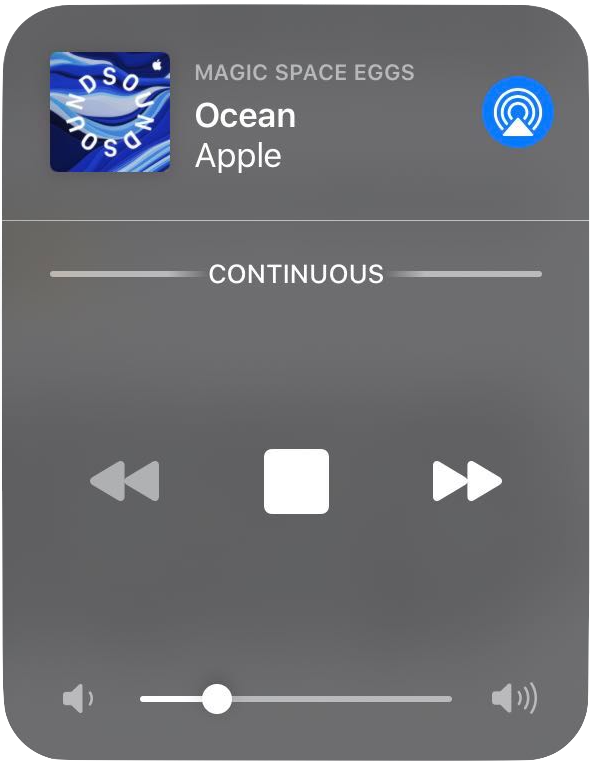 Apple has yet to publish online release notes or security notes for these updates. According to Apple’s security updates page, Apple also released tvOS 13.2, but no release notes are yet available. We also anticipate the release of macOS 10.15.1 Catalina and watchOS 6.1 soon, since they’re both required for the AirPods Pro.