In last week’s release of iOS 13.2, Apple finally made public iOS 13.2 for HomePod as well (see “iOS 13.2 and iPadOS 13.2 Serve Up Deep Fusion, HomeKit Enhancements, and HomePod Features,” 28 October 2019). It delivered features like the capability to distinguish between the voices of different family members, the option to use Handoff to transfer audio (music, podcasts, and calls) from an iPhone to a HomePod, Ambient Sounds, and sleep timers.

However, the release was, like so many of Apple’s operating system releases this season, plagued by a pernicious bug. The details varied somewhat by report, but installing iOS 13.2 for HomePod caused some users’ HomePods to stop working immediately. Some saw a white light on top of the HomePod; others saw a red light. Regardless, resetting the HomePod was a bad idea. Apple acknowledged the problem, pulled the update, and told users not to reset the HomePod. I can’t remember what that support note said originally, but now it recommends updating to iOS 13.2.1, which the company made possible with the quick release of the update. 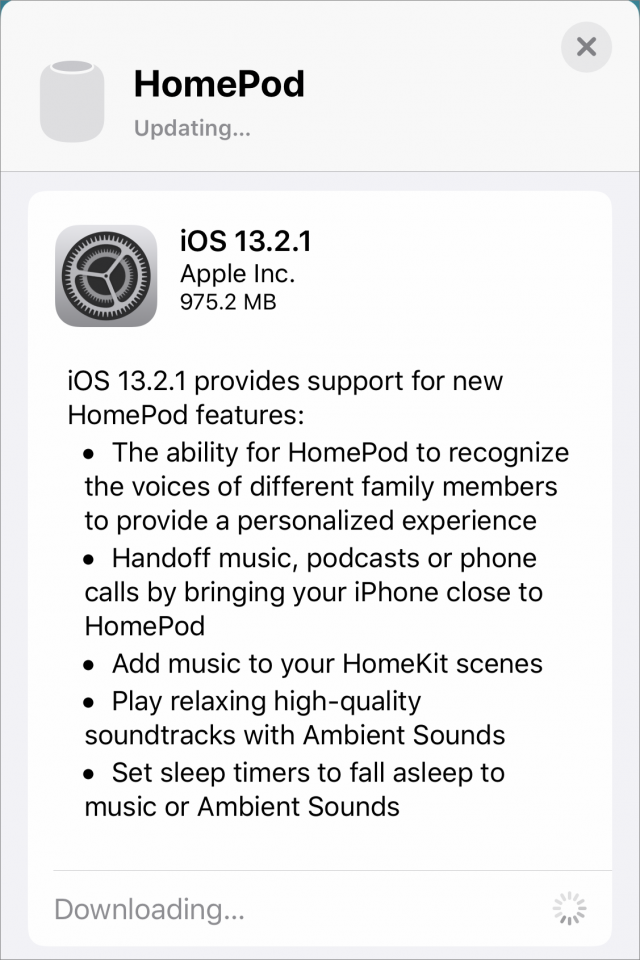 Because the bricking reports came out so quickly, I refrained from installing iOS 13.2, but after Apple released iOS 13.2.1, both of my HomePods updated themselves automatically. I suspect the same has happened for many, if not most other users. I haven’t experienced any problems with basic usage of the HomePods since they updated themselves, though I also haven’t had a chance to test the new features. The release notes for version 13.2.1 were the same as for 13.2, so Apple’s support page is the main confirmation that the update fixes the bricking problem.

(What I’m really waiting to see is if iOS 13.2.1 for HomePod resolves an occasional problem where Siri becomes incapable of identifying music (audio link) that it was playing as part of an Apple Music custom radio station. Weirdly, when I made that recording on the dining room HomePod, the same music was playing on the bedroom HomePod, and Siri had no trouble identifying it there.)

Regardless, if you’ve been worrying about allowing a HomePod to update, I think iOS 13.2.1 is safe. Should you run into any update problems, contact Apple support and let us know what they say.