Settle in, folks, it’s time for a tech-heavy travelogue. If you’re planning to fly to visit relatives for Thanksgiving in the United States in a few weeks, my experiences could help if you hit weather trouble.

On Monday, I took a final pass through the TidBITS issue, tossed an apple in my travel backpack, and headed to the airport to catch a flight to the Jamf Nation User Conference. It’s an easy trip—a short flight from Ithaca to Detroit and then another easy hop to Minneapolis—and I wasn’t anticipating any troubles.

Little did I know this would turn out to be one of the most weather-plagued itineraries I’ve ever suffered. I can’t say what it would have been like if I hadn’t been using Delta’s iPhone app and Apple Business Chat messaging service, but in the end, I came away impressed with Delta’s use of technology.

When I arrived at the Ithaca airport, I learned that my flight was delayed by 45 minutes. Nothing huge, but when I checked my itinerary in the Fly Delta app, it immediately offered me the opportunity to switch to alternative flights. I canceled out of that option since I wanted to check the length of my layover in Detroit. Unfortunately, once I did that, I was able to see that the delay would cause me to miss my connection.

It then took me a few minutes to figure out how to get the list of alternative flights again; the trick turned out to be to switch out of the Today tab (button at the bottom) to the My Delta tab and into the My Trips screen (button at the top). From there, the flight status under the city name showed the delay and tapping it showed me the alternatives. (Alas, I didn’t imagine the experience would turn into an article, so I have no screenshots from the actual event—the screenshots below give a sense of what information the Fly Delta app provides.) 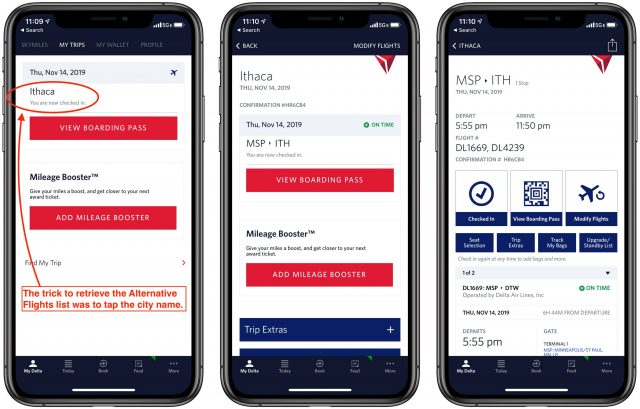 None of the alternative flights were good, with all requiring another hop and giving me an arrival time of 9:30 PM, meaning I’d miss the opening reception. I could have flown from Ithaca to Detroit and then to St. Louis, Chicago, or Philadelphia before going to Minneapolis. But since I had learned that the delay was due to a snowstorm, a quick look at the radar in the Dark Sky app revealed that St. Louis was the epicenter of the storm at that moment, Chicago had 30–40 mile-per-hour winds (with, as I later learned, a plane slipping off the runway at O’Hare Airport). While Philadelphia had decent weather, it was in completely the wrong direction. Uh oh.

I decided to get advice from the check-in agent, but she said I was better off working in the app myself. When I looked at the list of alternative flights again, a new option had appeared, with an extra bounce in O’Hare and an arrival time in Minneapolis of 8:30 PM. Not ideal, but better, so I jumped at it, and the app instantly rebooked me. What I think happened is that the Chicago-to-Minneapolis flight had been delayed as well, such that it suddenly moved into my time window. It was interesting to watch Delta’s dynamic system trying to keep up with hundreds of flights being delayed and canceled.

The only problem was that the app wouldn’t let me check in for the Detroit-to-Chicago flight. In retrospect, that was probably because check-in had already closed, but the plane wasn’t being allowed to leave. Confused, I hunted through the Fly Delta app for contact information and discovered that the company offered text chat options via Messages. This was my first real-world use of Apple’s still-in-beta Business Chat service, which debuted back in iOS 11.3 (see “iOS 11.3 Adds Battery Health Screen and Much More,” 29 March 2018).

After a quick back-and-forth with a useless chatbot and waiting 15 minutes, an agent popped up and was able to confirm that, even though check-in had closed for that flight, I was scheduled to be on it and everything was all set. A reassuring confirmation, and while it took another 35 minutes to achieve, it required only occasional responses on my part and was far better than waiting on hold for that long. 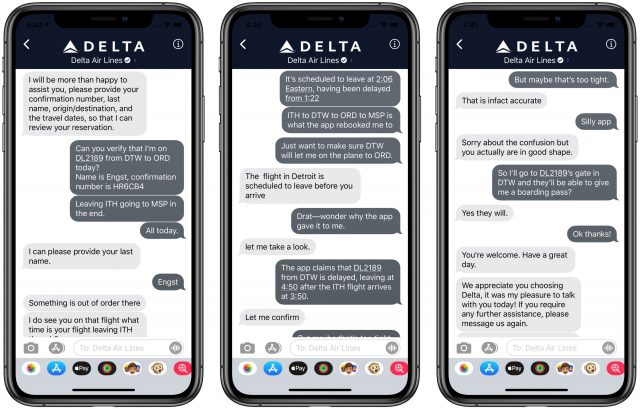 Fast-forward a bit, and I had gone through security and was sitting in the boarding area. Then a collective moan went up as many of us received the notification from the app that the snow in Detroit had caused our flight to be canceled. Word spread quickly that Delta’s phone system was overwhelmed and was directing everyone to use the Fly Delta app or delta.com Web site to rebook. Since there was no way I could conceivably get to Minneapolis that day, and the line to talk to the gate agent was long and moving slowly, I went home.

By the time I arrived back at the house and checked the app again, it had rebooked me on the next available flight out of Ithaca, which was the following day at 5:50 AM (ugh!). That was helpful, but, likely because my itinerary had changed from a one-hop flight to a two-hop flight, the app couldn’t figure out what to do with my second leg. Back to Messages.

It took another 19 minutes for an agent to pop up in my chat while I was eating lunch, but once again, she was able to give me a connecting flight from Detroit to Minneapolis, which showed up in the app a few minutes later. Given all the rebooking, I wasn’t entirely surprised when the app wouldn’t let me check in for the flight or get a boarding pass, telling me that I didn’t have an electronic ticket. That surprised the Delta agent, but after some additional checking, she reassured me that I would have no trouble getting a boarding pass the next morning at the airport. (In trying to explain the error I was seeing, I tried to send her a screenshot, but Business Chat, at least with Delta, rejects images.) This second conversation took 32 minutes. 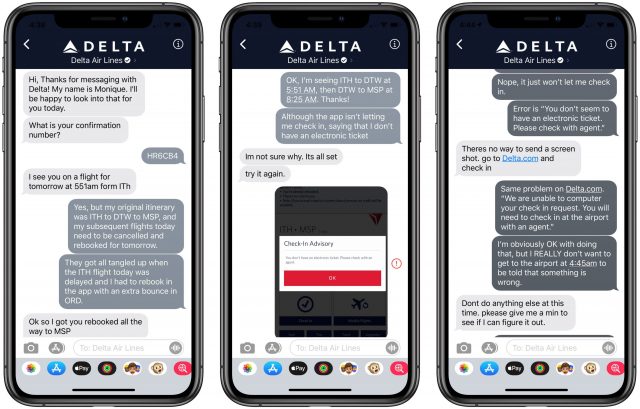 The next morning at 4 AM, before the plows were out to clear the 2 inches of snow that had finally reached us from the previous day’s storm in the Midwest, I checked the Fly Delta app to make sure it was worth going. Then I made my way to the airport, a more arduous drive than normal, including two tries at a steep hill in our Nissan Leaf, which didn’t yet have its snow tires for the winter, this being an early snow. Other flights were already canceled, but my flight was fine, although the need to de-ice for the first time in the year caused us to be late in arriving into Detroit and just miss my 8:30 AM connecting flight.

Back to the Fly Delta app, which promptly rebooked me on a flight to Minneapolis leaving at 12:30 PM. While walking to the gate, however, I noticed on the status monitors that there was another flight to Minneapolis leaving in 45 minutes, at 9:45 AM. I trotted down to that gate to see why the app hadn’t given that flight to me and found that it was indeed full, but the gate agent put me on standby. Another hour later—yes, this flight was delayed as well—he gave me a boarding pass, the app updated itself with the new itinerary, and 90 minutes later I was in Minneapolis. A quick trip via Lyft and I made it to JNUC in time for the media lunch, where I got to talk with IBM’s Fletcher Previn (see “IBM Finds Its Mac Users to Be More Productive Than PC Users,” 12 November 2019).

Phew! It was an odyssey, albeit one that started in Ithaca rather than ending there, and my first experience with using an iOS app and Apple’s Business Chat messaging to deal with a rapidly changing set of travel plans.

The moral of the story? If you have, for some reason, resisted getting the free airline apps, I can say that using them is absolutely worthwhile. From what I can tell, both the American and United apps provide similar features, and other airlines may as well. The way Delta’s app allowed me to pick alternative flights when there were options and rebooked me automatically when there was an obvious best choice was both brilliant and tremendously welcome.

I also appreciated the low-stress communication via Business Chat in Messages—between waiting for the agents to appear in Messages and then solve my problems and answer my questions, I spent over 100 minutes chatting. There’s no way of knowing if I could even have achieved the same results on the phone or if it would have taken the same amount of time, but the prospect of devoting that much phone time to such simple conversations is daunting.

So the next time you fly, take full advantage of whatever services your airline’s app provides, and if Business Chat or some other messaging service is available, give it a try. In a situation where you desperately need help, it might even be worth trying to chat and call at the same time and see which connects first.