If it were up to me, I’d be nominating the New York Times article “Twelve Million Phones, One Dataset, Zero Privacy” for a Pulitzer Prize.

Anonymous sources provided the Times with a dataset from a single location data company that contained 50 billion pings from the phones of more than 12 million Americans over several months in 2016 and 2017. With the data, Times reporters Stuart A. Thompson and Charlie Warzel were able to track numerous people in positions of power, including military officials, law-enforcement officers, and high-powered lawyers. They were able to watch as people visited the Playboy Mansion, some staying overnight, and they could see visitors to the estates of Johnny Depp, Arnold Schwarzenegger, and Tiger Woods. Once they identified any particular phone, they could track it wherever it went. Imagine what that data could be used for in the wrong hands.

The Times has done an impressive job of showing both the scope of the data—with interactive images showing all the location pings at the Pentagon, for instance—and also diving down to the specifics, with a Microsoft employee who made an unusual visit to an Amazon office and a month later, took a job there. Might employers want to keep tabs on employees with access to confidential information? That’s just one example—the article includes others, some speculative, some not (like one random Los Angeles resident who was found traveling to roadside motels multiple times and staying for a few hours each time).

Go read the Times article and the additional pieces that the paper has published:

It’s a sobering look at just how little control we have over our privacy and how little oversight there is over an industry that knows more about us than our own families. Even if we assume good intent on the part of the companies collecting this data, there’s no guarantee it can be kept out of the hands of foreign governments or organized crime. The Times has put the spotlight on this industry; it’s up to us to make sure we convey our opinions of this situation to our elected representatives.

What You Can Do to Protect Your Privacy Now 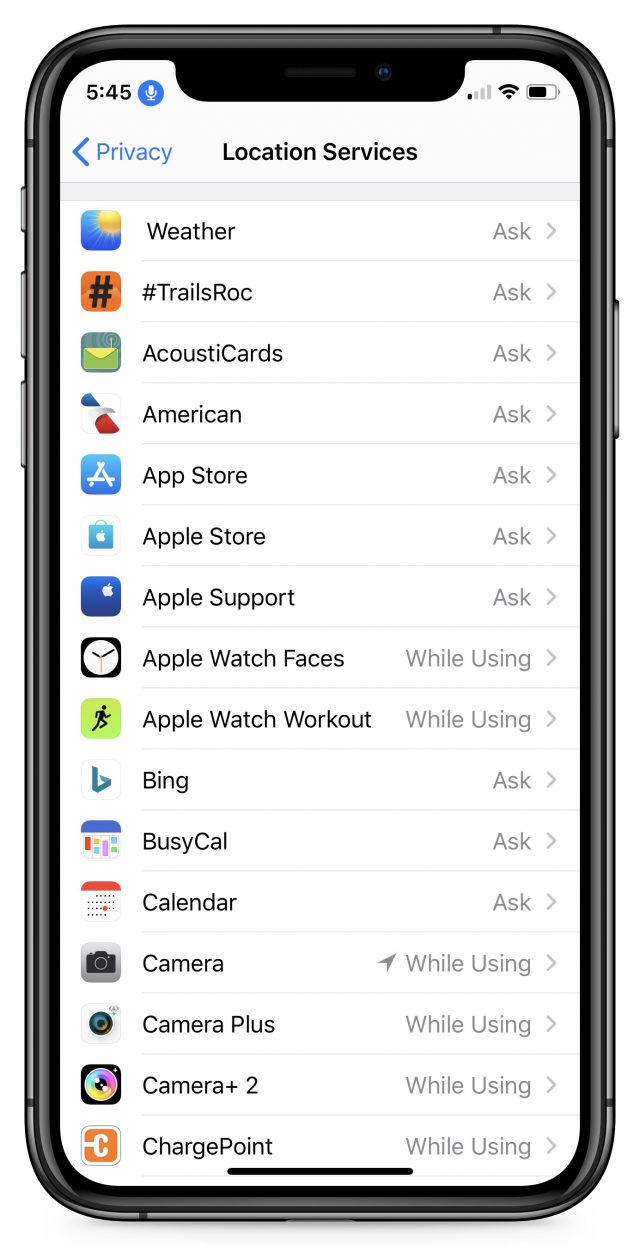 In the meantime, go to Settings > Privacy > Location on your iPhone and set every app to Ask Next Time unless you know what it’s doing with the location data. For instance, the Camera app needs the While Using the App setting to geotag your photos, and Maps needs it to give you directions. The Ask Next Time setting ensures that you’ll get a chance to decide the next time you actually use the app. Also, set any apps you don’t (or shouldn’t) trust, like Facebook, to Never, and make sure no app is set to Always unless you trust it implicitly. You might be surprised by which apps want to track you and which are set to Always.

There’s no guarantee that restricting your location sharing settings will prevent these companies from tracking your location because there’s no way to know which apps are abusing their privileges (well, other than weather apps). The only way to be certain it’s not happening would be to turn off location services entirely, but that would severely reduce the utility of the iPhone. Even setting every app to Never would be problematic, eliminating Maps and Google Maps, Lyft and Uber, and photo geotagging in all camera apps. That’s why we recommend the approach above—everyone’s level of concern will differ, and only you can determine how perturbed you are by this tracking.