With its engineers back on the job after the end-of-year holiday, Apple has released updates for all its major operating systems, though without any particular theme. iOS 13 gains a new privacy setting, iOS and iPadOS receive a fix for an easily circumvented parental control, and macOS tweaks performance for recent Apple hardware. Once again, watchOS and tvOS don’t merit detailed release notes.

iOS 13.3.1 and iPadOS 13.3.1 offer a grab bag of fixes and one privacy-related improvement. In general, we see no reason to delay upgrading for more than a week or so to make sure there aren’t unexpected problems lurking in the updated code.

After privacy concerns surfaced about the ultra-wideband technology in the iPhone 11, Apple has added a feature to turn it off entirely in iOS 13.3.1. Just go to Settings > Privacy > Location Services > System Services and turn off Networking & Wireless. 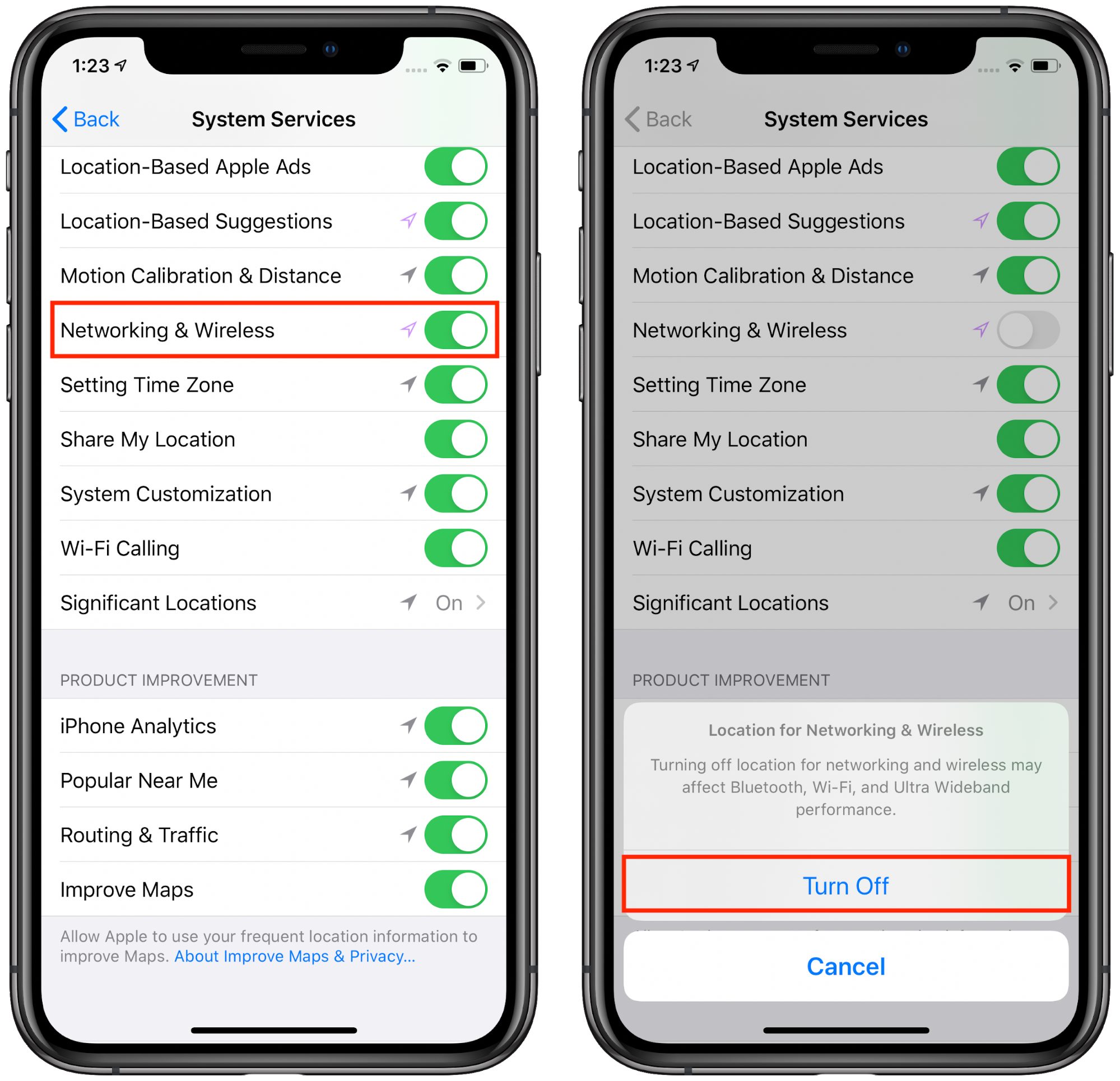 Our Watchlist contributor, Agen Schmitz, tells us that iPadOS 13 on his iPad Air 2 ran slowly and stuttered frequently, but the iPadOS 13.3.1 update has restored its snappiness.

For older devices that can’t upgrade to iOS 13, Apple also released iOS 12.4.5 with “important security updates” but did not publish any CVE entries.

The 117.3 MB iOS 13.3.1 update for HomePod introduces an Indian English Siri voice, along with general fixes. 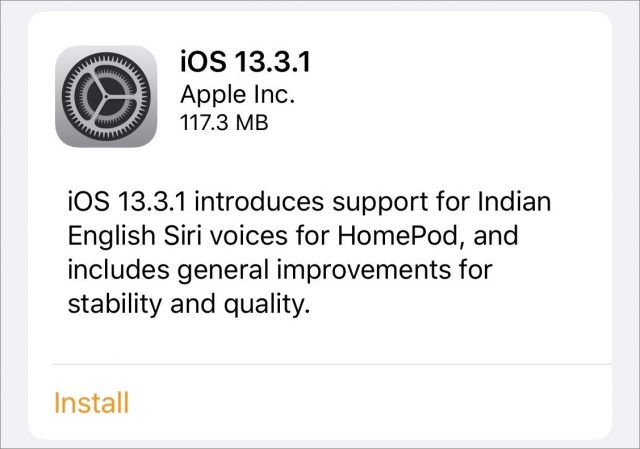 You can change your HomePod Siri voice by opening the Home app, touching and holding the HomePod tile, tapping the gear icon in the lower-right corner, and then selecting Siri Voice.

To update the HomePod manually (it should update itself soon enough), open the Home app, touch and hold the HomePod’s tile, tap the gear icon to bring up HomePod settings, and then tap Install. 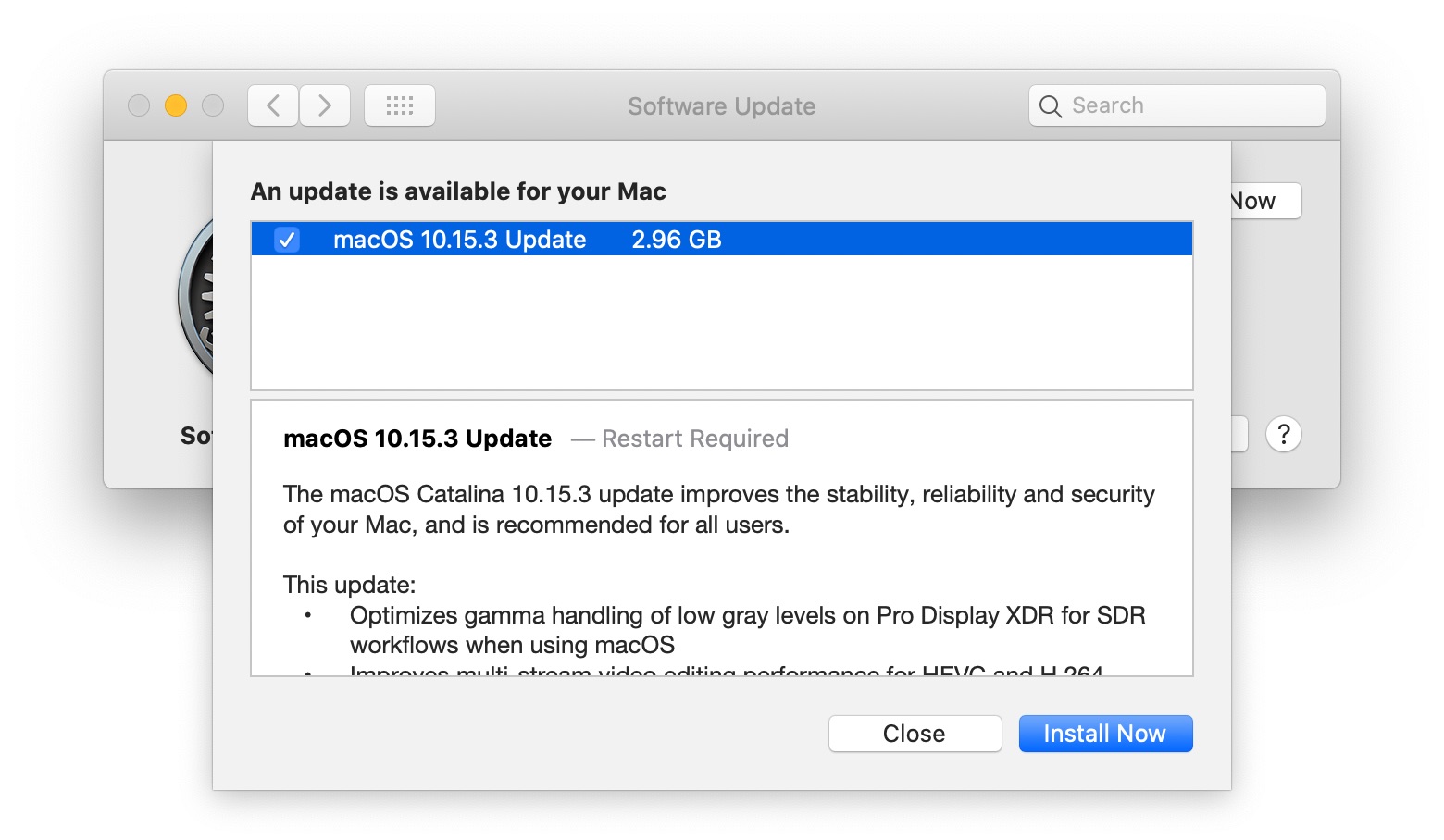 Apple made no mention of the Mail data loss bugs that we’ve been hearing about (see “Beware Mail Data Loss in Catalina,” 11 October 2019), but our own Michael Cohen reports that after installing the update, macOS informed him that it was updating his Mail database. Let us know if you experience any data loss problems with Mail in 10.15.3.

Michael Tsai, who has been tracking this issue, wrote:

There’s nothing about it in Apple’s release notes, but from what I’ve heard macOS 10.15.3 fixes the bug where large numbers of messages stored “On My Mac” could be deleted when updating to Catalina or rebuilding Mail’s database. It does not fix the bugs where moving messages between mailboxes (via drag and drop, rules, or AppleScript) can delete them, duplicate them, or simply not move them at all.

You can install the macOS 10.15.3 update from System Preferences > Software Update. If you’re editing video on a 16-inch MacBook Pro or using a Pro Display XDR, you probably should install it soon. Otherwise, assuming you’re already running Catalina, it’s worth waiting to install it for a few days to make sure the community doesn’t report new problems. For those who haven’t yet upgraded from Mojave, and especially for those who move messages in Mail frequently, there’s still no harm in sitting tight for now.

The watchOS 6.1.2 update “provides important security updates and is recommended for all users.” You can install the update, which weighs in at 98.8 MB on an Apple Watch Series 4, from the iPhone’s Watch app: go to Watch > General > Software Update. 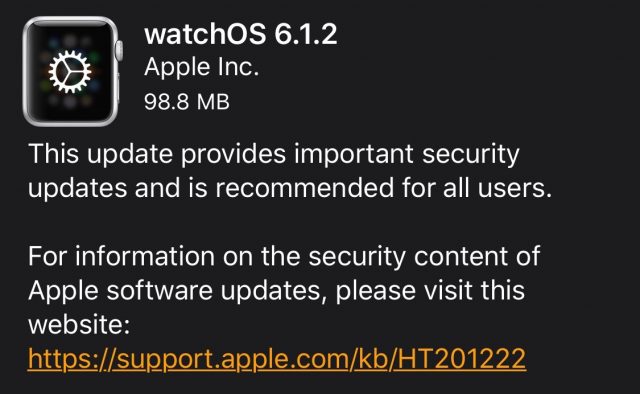 There’s no reason to avoid this update, but it’s hard to get excited about installing it quickly. Do it some night when your Apple Watch is charging anyway.

As usual, the tvOS 13.3 update notes are sparse, promising only “general performance and stability improvements.” The update includes 13 security updates, largely shared with the other operating systems. If automatic updates aren’t on, you can update your Apple TV HD or Apple TV 4K by going to Settings > System > Software Updates. We just let ours update automatically when they get around to it. Let us know if you notice any changes.