I am back from Italy but still owe TidBITS readers a mea culpa. This year’s CES coverage is, obviously, getting out the door very late. This story includes what I saw at Showstoppers, the third of three mini-shows at CES, and will be shortly followed with what I saw on the main show floors. The ? emoji indicates that I was given a review unit and no one said anything about having to return it. 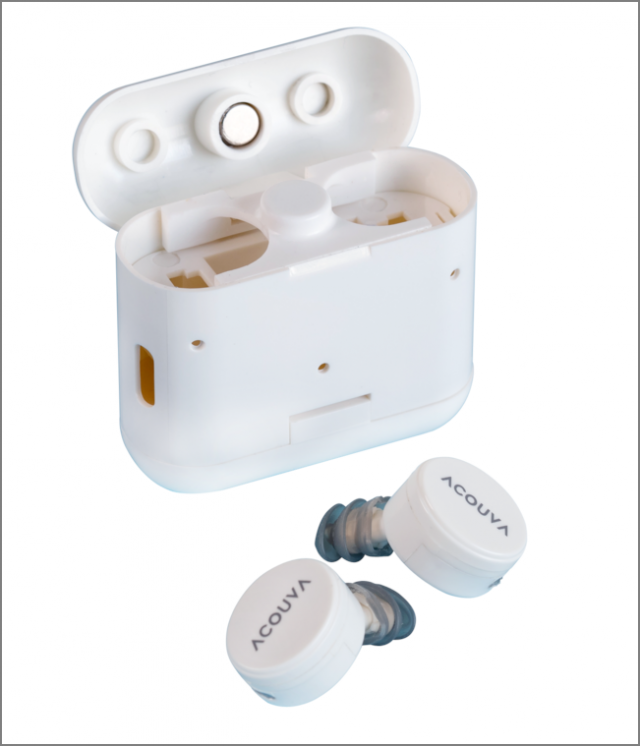 In a market that’s filling up with fancy Bluetooth earbuds, Acouva’s three models have some interesting tricks up their sleeves. They all have customizable equalizers that adjust frequency volumes to make up for partial hearing loss, and the high-end Acouva Amp does this for ambient sound as well to allow for hearing assistance. Taking “charge in the case” one step further, two models have hot-swappable batteries with a second pair in the case, allowing for 20 hours of uninterrupted listening. As you would expect, these batteries are tiny and thus easy to lose. The microphones work via bone conduction, so they pick up your voice with no interference from ambient sound. Rubber tips come in four different sizes for good in-ear fit. They have a low in-ear profile that makes them look almost exactly like a pair of foam earplugs—on the other hand, they look exactly like a pair of foam earplugs, which are remarkable in public in a way that earbuds are not. The case can independently store and transmit music files, allowing you to use the earbuds without your phone. Unfortunately, Acouva hasn’t yet set a release date. While they’re still in pre-order, all models are discounted: the Acouva One with 4–6 hours of battery life is $155 (regularly $185), the Acouva Extreme with 16–20 hours (including both battery sets) is $200 (regularly $250), and the Acouva Amp with Extreme features plus hearing assistance is $350 (regularly $500).

Old-school arcade fans have had a range of choices for having their own videogame cabinet at home, including DIY builds and commercial options—the latter have the added bonus that all of the games are legally licensed (see “CES 2019: ShowStoppers Demos Smart Ovens, Big Batteries, and More,” 15 January 2019). AtGames claims that its Legends Ultimate cabinet has the best feature set of any of them, which I find fairly credible. The cabinet is a full-size standup and ships with 350 arcade and console games built-in, apparently all classics. For controls, it offers dual joysticks, paddles, and button sets for two-player games, and a trackball for single-player games that require one. Plus, it includes features you never found in the arcade, such as mapping extra buttons to game actions, save and rewind modes, and screen aspect ratio modifications per-game. A premium service provides the ability to network the cabinet to download new games from AtGames (pricing TBD), or to use the cabinet as a console for other games from services like Steam or GOG (see “Good (And Not So Good) Old Games Now on the Mac,” 13 December 2012)—but at $1 per hour (!?), you might be better off sticking to Donkey Kong. Legends Ultimate costs $599 and is available for order but currently sold out (you may be able to find one at Sam’s Club or Costco). AtGames is expecting new shipments in March, after delays caused by coronavirus issues.

Castaway Second Monitor for an iPhone

Sidecar, Duet Display, and Luna Display all provide a second screen for your Mac (see our Multiple Monitors series). Castaway Development intends to do the same thing for your iPhone. The company’s castAway case is a wallet-style iPhone case with a second 5.8-inch or 6.3-inch screen built into the cover. An app on your iPhone communicates with whichever app you’re currently using and tells the Chromium-based operating system on the second screen to host complementary information to whatever you’re doing. If there’s no appropriate mode for the app you’re using, it defaults to a standard Chrome mobile browser or an iPhone app launcher, or you can turn it into a fullscreen keyboard, trackpad, or game controller. The castAway case’s onboard battery and SD card can be shifted into iPhone service, extending the iPhone’s battery life or providing the SD slot the iPhone is missing. And yes, it has a headphone jack. Now on Indiegogo with a predicted shipping date of May 2020, it’s compatible with iPhones since the iPhone 6. The S model with the 5.8-inch screen for most iPhones costs $199; the L model with the 6.3-inch screen for Plus and Max iPhones is $209. 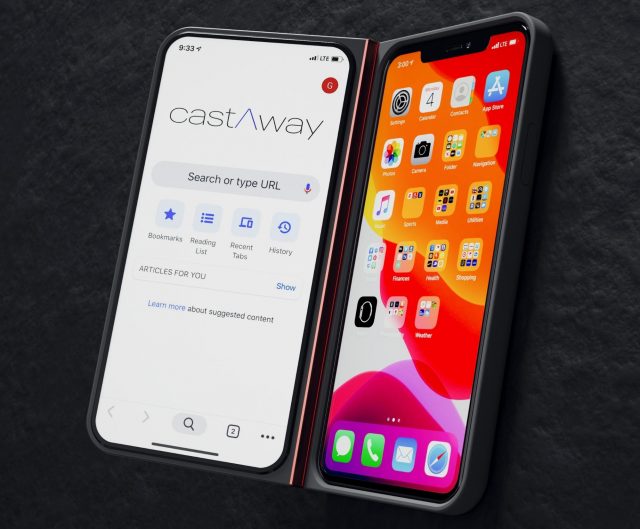 I’m using an Eggtronic gallium-nitride (GaN) charger right now to power my 13-inch MacBook Pro, a connected iPad Air 2, and an external portable hard drive—a combination that has forced other third-party chargers claiming 60W compatibility to trickle-discharge the MacBook’s battery to keep it all running. Eggtronic’s Sirius 65W Universal Adapter ?, however, is having no trouble keeping me at full charge. It’s smaller and thinner than Apple’s MacBook charger and includes a USB-C cable with adapters for Lightning and micro-USB. Available in black or white, it’s shipping now for $79. 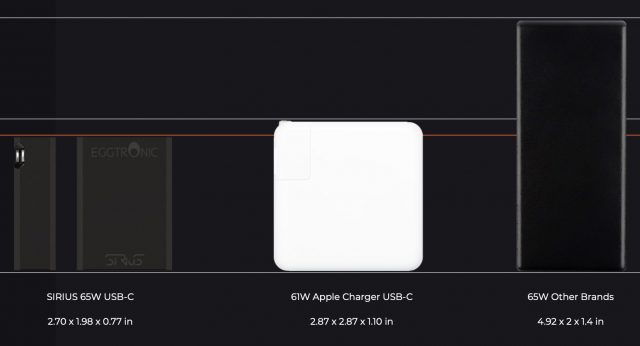 Massive (and expensive) monitors are nothing new to Mac users, but it’s very Star Trek to see huge wraparound displays. That’s what makes the HP S430c so eye-catching. This 43.4-inch curved monitor has the same resolution and aspect ratio as two side-by-side 24-inch displays (32:10 and 3840 by 1200), which is just over half the resolution of a 4K monitor (3840 by 2160), and it can indeed be used in that fashion. One Mac can drive the entire monitor, it can treat it as two displays, or you can connect the monitor to two computers simultaneously. In the latter case, HP software watches your mouse movements, and when you move the pointer from one half of the screen to the other, it seamlessly points your mouse and keyboard at the other machine. But beyond that: gorgeous 16:10 4K monitors are great, but there’s just something captivating about a normal-height monitor that fills your peripheral vision so well that it needs curvature to avoid distortion. Shipping now for $999.

Three years ago, I was wowed by OWC’s announcement of the DEC, a MacBook dock that sat flush with the laptop (see “CES 2017: Gadget Finds on the CES Show Floor, Days 1 and 2,” 10 January 2017). That product never saw the light of day, but Linedock has pulled off the same thing: a 13-inch MacBook-sized dock packed with ports, a spare battery, and an optional SSD. The Linedock 13 beefs up your MacBook Pro or Air with three USB-C ports, three USB-A ports, HDMI and Mini DisplayPort jacks, an SD card slot, and 4K monitor support. A 20,000 mA battery rounds out the base model, which is enough to put a full charge back into a MacBook Pro. Top it off with an optional 256 GB or 1 TB SSD. It fits underneath your MacBook Pro or Air, connects via USB-C, and adds 2 pounds (912 g) to your laptop bag. Available now in space gray and black, with silver coming soon, as is the model for 15-inch and 16-inch MacBooks. $349 without storage, $449 for the 256 GB SSD, $699 for the 1 TB. 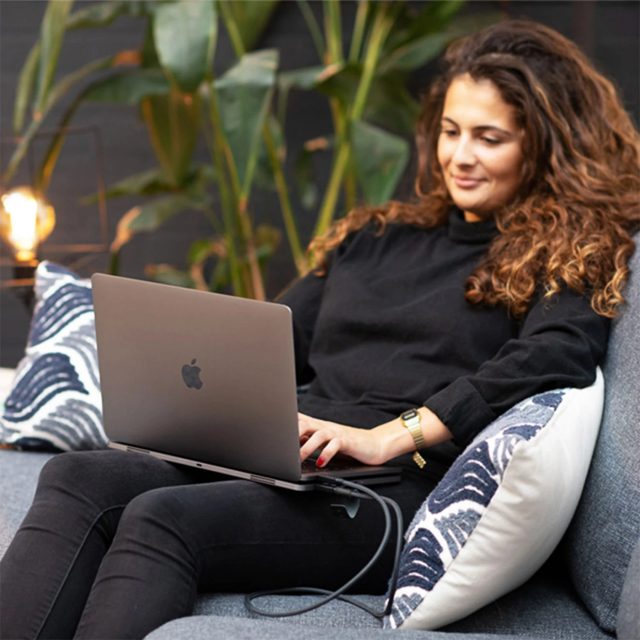 Matias is always good for innovations in keyboard design, and this year’s is the Programmable Ergo Pro ?, an upgrade to the company’s older Ergo Pro model. Like the old one, this mechanical keyboard is split into two pieces and can be set to several degrees of tilt, including flat. Comfortable palm rests are built-in, but you can remove them with a screwdriver, or swap them out for different color pads (sold separately). “Programmable” really means “macro-capable”—much as with software utilities like Keyboard Maestro or TextExpander, you can program twenty keys on the keyboard to type up to 60 characters every time they’re pressed. Unlike those utilities, setting up a macro is as simple as holding down Esc-[program key], then typing out the sequence. These sequences can include modifier keys to create shortcuts, so you could set up one-key Spotlight by configuring a key to send a Command-Space. I can report that it’s built like a battleship, and its key action makes me weep with joy. Available now for $220. 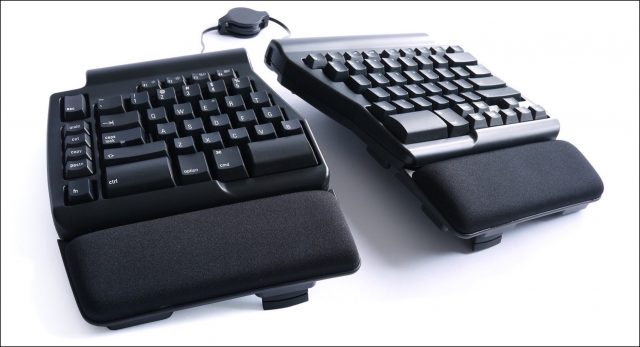 Plex has been a good media organizer for a long time—toss your DRM-free movies and TV shows into folders that it watches for you, and it’ll catalog them, present them in a Netflix-style interface with video information and previews, and let you share them throughout your network—both the one you have at home and among your network of friends. Plex is a free download, but some features require a Plex Pass subscription (including sharing with other people). Just before CES, though, Plex rolled out a reason to sign up even if you don’t own or organize your own stuff: a free video-on-demand service with a few thousand movies and TV shows, supported by advertising. I’m watching a movie now, and 30 minutes in, all I’ve been subjected to is a 15-second pre-roll. You won’t find first-run stuff here—aside from documentaries, everything seems mostly at least five years old—but there’s plenty that’s watchable. (I recommend the 1940s Max Fleischer Superman cartoons to anyone disappointed by recent movies.) Plex requires a free account, which also includes other content, including Web shows and news channels. A subscription fee (monthly, annual, or lifetime) purchases the Plex Pass, which provides additional services such as downloading from your home server to mobile devices, and a second monthly subscription fee unlocks the Tidal library of streaming music. 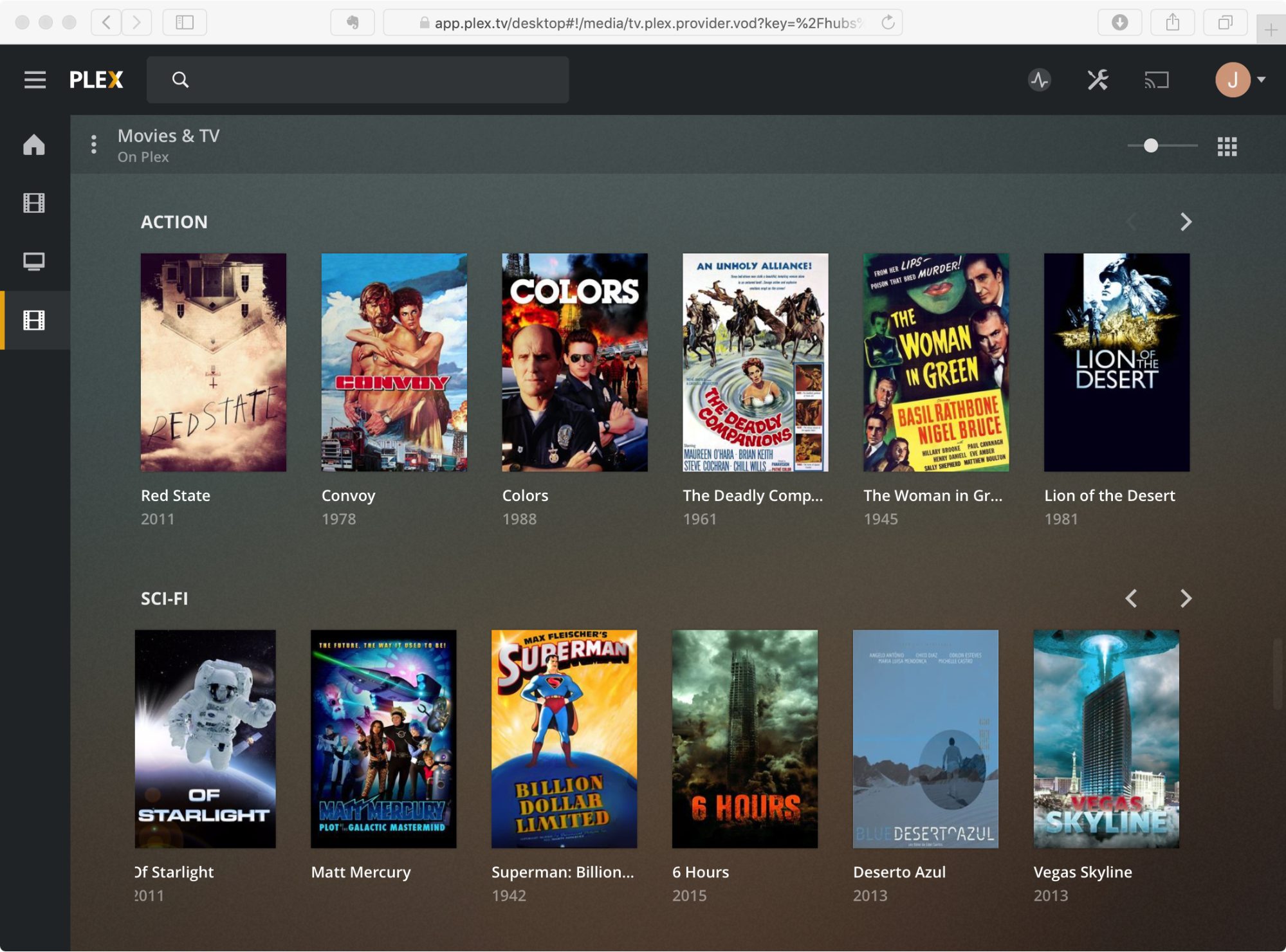 The Sunflower Home Awareness System is the kind of home security technology that I’ve seen in dystopian science fiction but hadn’t yet considered as a consumer product. Then again, I live in a city, where I can touch the opposite edges of my front lawn simultaneously with outstretched arms; I expect that TidBITS editor Josh Centers in Tennessee would see its benefits. The system consists of Sunflowers, which are motion and vibration sensors that double as (and are disguised as) garden lights; the Bee, a quad-rotor autonomous drone; and the Hive, a combination launching pad and charger for the Bee and the CPU brains of the system. If the Sunflowers sense anything out of the ordinary, the Hive sends you an alert, and you can choose to send out the Bee for live aerial footage. The demo video displayed the Bee monitoring the kind of estate usually seen in Hollywood movies, but I could imagine this being a useful system for anyone whose land boundaries extend further than eyeshot. One question, though: Sunflower Labs claims the drone deters unwanted visitors, but at a $9950 starting price for the entire system, I’m thinking a Bee is a pretty decent ransom target for anyone who brings a butterfly net. Pre-orders are being taken now with $999 down payments; your final price is based on any customizations you need for your property. Shipping begins mid-2020. 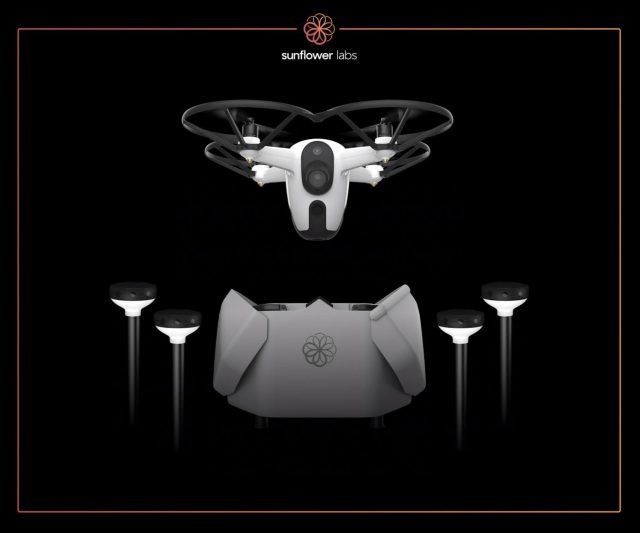 Never mind the business uses of a portable projector, there’s just something fun about having one and being able to show a movie on any conveniently nearby blank wall. The ViewSonic M2 seems perfect for this (and for mobile business uses): it can create a display of up to 100 inches at a distance up to 8.9 feet from the projector, with a 1200 lumen LED bulb rated for 30,000 hours. This from a device that’s a bit under 9-by-9-by-3 inches (22-by-22-by-7 cm) and weighs 6.9 pounds (3.1 kg). The M2 is slated to ship in March 2020 at an estimated price of $649.99, although the ViewSonic Web site misleadingly says it’s “out of stock” and quotes a price of $729.99 (presumably the MSRP, from which it will be discounted). 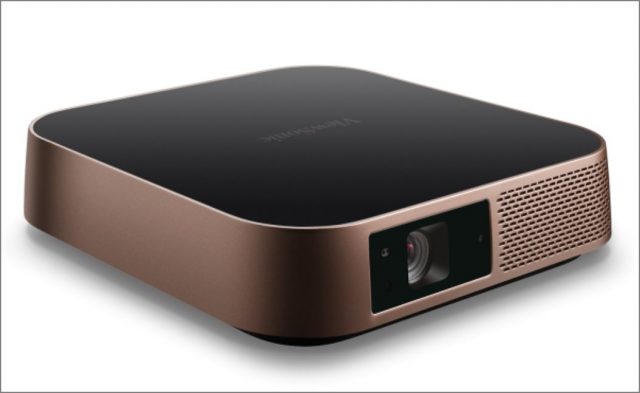