I spent my last day at CES at the Sands Expo Center in the Venetian, a venue whose huge show floor normally takes me over twice as much time—and it’s still only two-thirds the size of the Las Vegas Convention Center that I had to skip entirely this year. But the Sands and the breakout shows provide the highest signal-to-noise ratio for interesting items to report on, and this year’s schedule turned up a healthy batch of new gadgetry.

Other World Computing is a must-see at any CES, since the company is always good for some innovative new gadgets and expansion options for those Macs that allow for them (and a few that don’t). This year’s releases focused on the “prosumer” space: technology with some serious oomph that’s still within reach for the home user. Unless otherwise mentioned, all of the following will be available by the end of March 2020.

Starting with software, OWC announced upcoming versions (and a name change) of SoftRAID Lite and SoftRAID, to be called SoftRAID Standard and SoftRAID Pro. These utilities enable you to create super-fast and reliable disk volumes out of combined sets of drives, with multiple physical disks showing up as a single volume. Apple’s Disk Utility can also create RAIDs, but it leaves much to be desired in flexibility and transparency when troubleshooting a problem. SoftRAID was originally developed by Tim Standing, now OWC’s Vice-President of Engineering, who blew me away with his deep knowledge of Apple disk formats and physical drive architecture. SoftRAID offers multiple flavors of RAID formats (check out Jeff Carlson’s Take Control of Digital Storage for a deep dive into which one is right for you), but at a cost: basic RAID formats for striping and mirroring (0 and 1) are included in the $49.99 SoftRAID Standard, but for the useful RAID 5 and newly added RAID 6 formats (both of which combine speed with more resilience from failure), you’ll need the $179.99 SoftRAID Pro. Note that some of OWC’s multi-drive bay enclosures include a copy of SoftRAID. 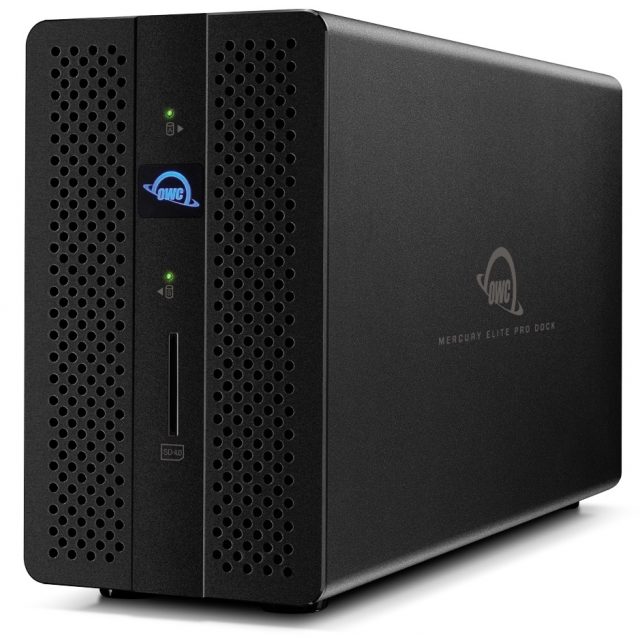 If you’re looking to expand your Mac with more ports and more storage, check out OWC’s Mercury Elite Pro Dock (now available; shown here). It combines a two-disk drive bay and hardware RAID (but unfortunately, no RAID 5) with Thunderbolt 3, USB-A, Gigabit Ethernet, and DisplayPort 1.2. It starts at $319.99 with empty bays (add your own disks) and then ranges from 4 TB at $519.99 to 28 TB at $1,399.99. For even more power, there’s the forthcoming ThunderBay Flex 8, a combination drive bay and dock that includes eight bays, up to 112 TB configurations, and SoftRAID—with a mention that you can daisy-chain six of these units together should you need 0.66 petabytes anytime soon. No word yet on what it will cost.

I was skeptical about smart lights for years, until I splurged on a Hue setup and became so enamored of my daily color cycle that I miss it when I travel. (Bluish in the morning, white during the day, yellowish in the evenings, and 60-watt amber before bedtime.) If I had any home decoration ability, I’d be sorely tempted by Nanoleaf’s addition to the genre: wall light panels that you can arrange in any combination to create lighting that verges on illuminated art. The first two models were equilateral triangles and squares (see “HomeKit Hardware to Expect in 2018,” 19 January 2018); in May 2020, Nanoleaf will add hexagons to the interoperable mix. You can set each panel to a particular brightness and color, and then control them by touch, an optional dodecahedral remote control, an iPhone app, accessories that sync to music or what’s on your monitor (for movies and gaming), or Siri, Google Assistant, and Alexa. Later this year, Nanoleaf also plans to release the U–IQ accessory hardware that watches the patterns of usage and colors you choose and suggests automated routines based on your preferences.

There are, however, two drawbacks. The first is that navigating the shop and support pages is needlessly complex, with multiple brand names and kits. It’s easy to get confused about what you’ll need to implement your own design. The second is that the starter kits come with only nine light panels, but the depicted designs on the Web site show many more—to make similarly large designs, be prepared to buy additional panel packs and power supplies. That said, the opportunity to design the shape and display of these panels will be a blast for many hobbyist interior designers. Kits with nine triangular or nine square panels and starter accessories are $199.99 in the Nanoleaf shop; additional panels in various pack sizes cost around $20 each, but some designs require additional accessories. 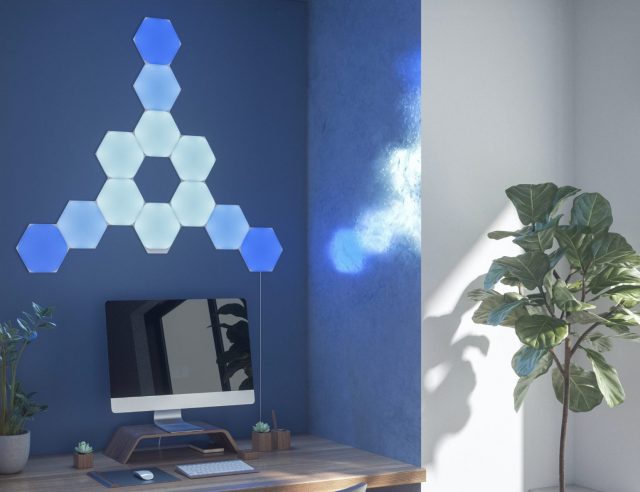 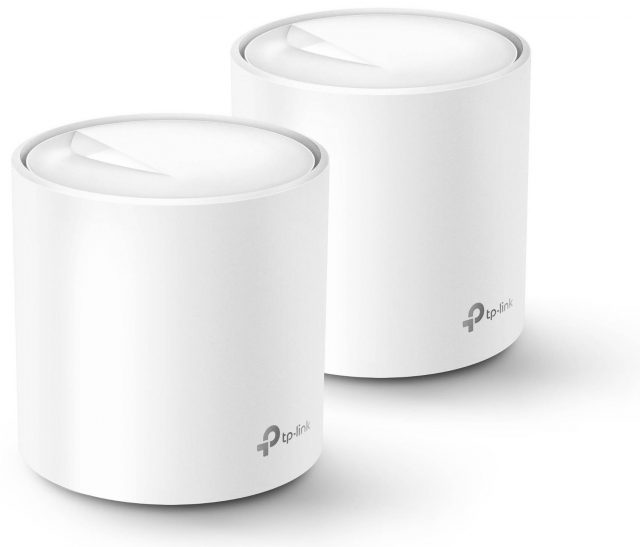 Some predictions are easy to make. One is that some future generation will laugh at us for calling our technologies “smart” while we still had to put devices down on charging pads—or worse, plug them into wires—in order to keep them working. Eventually, all our grandchildren will be like Commander Data and the lamp, unable to imagine a world without wireless power while most people now remain vaguely uneasy about a world with it.

Ossia isn’t quite promising that future today, but the company does have a first step with a wireless 5.8 GHz network that can charge handheld gadgets hooked up to a receiver—a receiver that Ossia obviously would prefer to see built into your next gadget. The Cota Home system is based on receivers in—or for now, attached to—each device, which talk to a transmitter somewhere in the house. The company doesn’t say specifically, but its illustrations indicate the receiver needs an unblocked path to the transmitter with no objects in the way, but this path can reflect off some surfaces. The transmitter then sends a powered radio wave in the direction of the receiver, and only in that direction, meaning that there might be microwaves flitting around, but they won’t hit you. (And even if they did, it would take a lot of hits before heating would occur; your Wi-Fi network doesn’t keep you warm.) If an object such as a human or other mammal breaks the line between the transmitter and receiver, the power stops. This is clearly meant to reassure people who intuitively think there must be a health hazard involved with wireless power, although current research demonstrates it to be safe.

The transmitter model looks suspiciously like a plastic HomePod now, but Cota notes it can be any shape—and presumably, it would also like to see them built into the walls or ceilings of your next house. Less exciting to me is the Cota Cloud, the required software that controls your powered network—and I presume “cloud” in this case means, “Ossia gets at least some of your data.” Cota Home isn’t yet available for purchase—and has many competitors to be the ultimate standard—but ever since I saw a wireless blender a decade ago (see “CES 2010: Blending the Future,” 7 January 2010), it has been evident to me that this is the direction we’re headed. 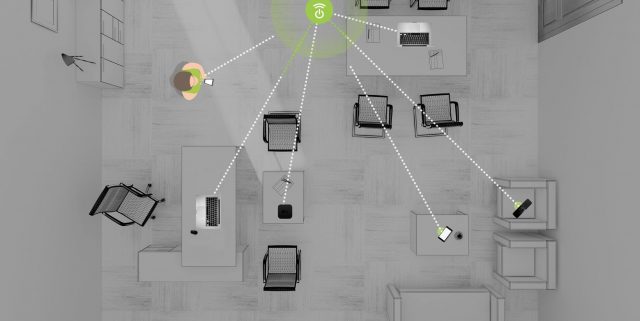 Smart Mimic brings a few interesting wrinkles to its Mimic Go travel security gizmo, combining the location awareness of Bluetooth trackers with the security features of a tamper alarm. It’s about half the depth of a cube 1.7 inches on a side (44 mm by 44 mm by 25 mm), made of Day-Glo orange plastic with a golf ball-sized light in the middle. 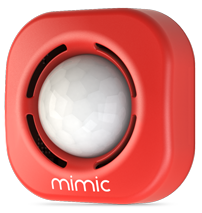 Attach it to a bag or a hotel room door (or any metal plate with the built-in magnet), and it’ll let off a 120 dB alarm if it’s tampered with or moved. Even better: it has an always-on Internet connection through the LoRa network, meaning no monthly data fees, and it’ll register its location for up to three months on a single battery charge. That’s a huge improvement over Bluetooth trackers that require mesh networks with other trackers to find out where your stolen bag is going. The part I don’t understand: once the alarm tells a thief there’s a tracker in the bag, why assume the loud noise will force them to drop the bag? I’d rather have an alarm that’s silent and tracking their location because the longer they don’t see the tracker and ditch it, the more likely my stuff can be recovered. Shipping in April 2020 for $69.99—and with a lifetime full refund offer if it doesn’t meet your needs.

Nuheara was among the first companies I saw offering assistive hearing technologies in its earbuds back in 2018, and I’ve written about the company’s releases since (see “CES 2019: CES Unveiled Kicks Off the Annual Gadget-fest,” 8 January 2019), but I still haven’t gotten my hands on a review pair for a live test. If the latest model, the IQbuds2 Max, lives up to its marketing, it will be impressive indeed. 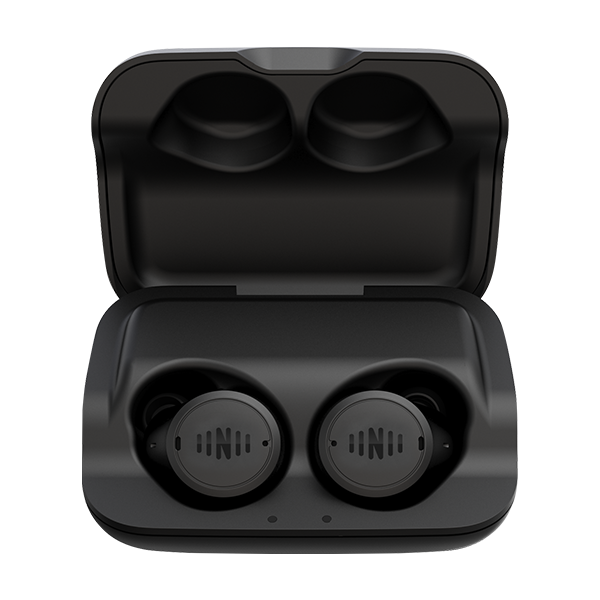 Alongside the now-almost-standard noise cancellation, hearing frequency adjustments, and adjustable passthrough of ambient sound, Nuheara promises “speech in noise control” that specifically isolates speech from background noise, along with directional focus that clarifies sound coming from directly in front of you. Of course, the IQbuds2 Max also act as regular earbuds, work with calls, and control Siri with 20 hours on a charge (presumably this includes the charges in the carrying case). At $399, they’re cheaper than prior releases have been, and pre-orders now (due to be shipped in April) are discounted to $359. There’s a 30-day return guarantee if you want to give them a spin.

It’s uncommon for me to cover anything related to Windows at CES, but this laptop inspires dreams of what might someday come down the pike in an iPad or MacBook. The Lenovo ThinkPad X1 Fold is called a laptop because it’s a regular computer, but it looks more like a 13.3-inch tablet with an external keyboard. Keep it flat and it’s a regular monitor; bend it on the center hinge and it becomes two displays in either portrait or landscape orientation. Keep the screen in landscape and the two halves of the screen display like pages of a book, or turn the bent screen to portrait and see two 10-inch landscape displays one atop the other (which fit into a 13.3-inch display according to the Pythagorean Theorem). The keyboard that’s made for the X1 Fold fits neatly inside the sandwich made when the screen is fully closed. If you can bear using Windows 10, it will start at $2499 when it ships in mid-2020—but you’ll have to wait a bit longer for the kickstand that holds up the screen, which gives you some idea of the Windows user experience.

The technology is whizbang and fun to see, and it answers a question I still have about iPads: why doesn’t Split View allow a horizontal split instead of just vertical? The glaring flaw in the X1 Fold—the external keyboard—could be an iPad opportunity. Just as haptic feedback fools you into thinking your MacBook trackpad clicks, I can see something similar creating the illusion of a real keyboard on an iPad—although a 12.9-inch iPad Pro would translate into a cramped 7.75-inch keyboard in portrait mode, so something else would need to be involved for a good experience. In the meantime, we can dream of Westworld. 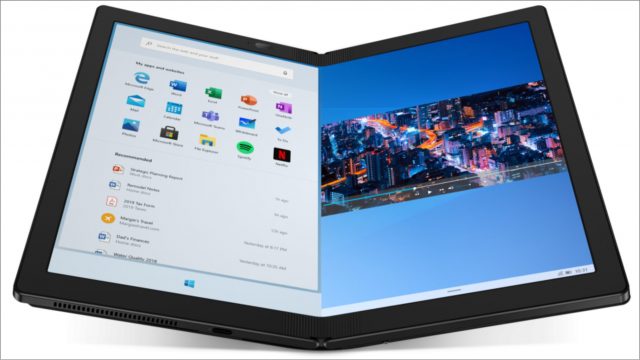