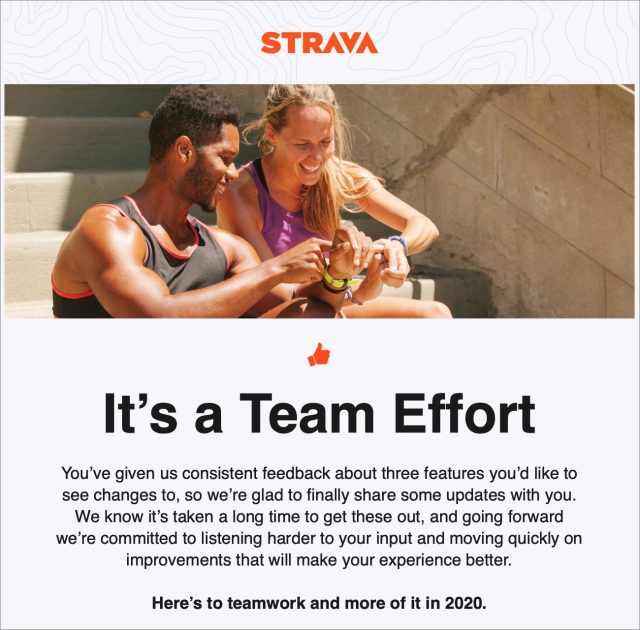 The workout logging service and social network Strava just announced three new features, several of which have been requested—loudly—by users for several years now. They include a return to a chronological ordering of the activity feed, auto-flagging when you forget to stop a workout and drive away, and integration with the Apple Watch’s Workouts app. For those who use Strava, these features will be welcome; for those who don’t, it’s an interesting lesson in how tech companies suffer by failing to listen to their users.

As a brief recap, Strava provides a number of apps and works with numerous GPS-based watches that track running, biking, and swimming workouts, as well as numerous other sports. Once you upload a workout to the service, it appears in the feed of all your friends who follow you. Workouts can be public or private, and you control who is allowed to follow you.

In “FunBITS: Strava Makes Exercise Social and Virtually Competitive” (27 July 2014), I wondered if another service might supplant Strava as the preferred network for athletes, but at least in the athletic world I inhabit, Strava remains the king, even if we commoners aren’t always happy about it.

Chronological Ordering of the Activity Feed and Notifications

In late 2017, Strava released “a new way to experience the Strava feed,” by which the company meant a non-chronological ordering of workouts of the people you follow. Strava described it like this:

When you refresh your feed, any content you haven’t seen before will be at the top of the feed, above activities you’ve already seen. The order in which these new items appear is based on a learning algorithm that uses your past behavior to gauge whether you’ll find content interesting. Comment a lot on your sister’s activities? Her items will be ranked highly for you. Your friend just ran their best time for a 10K? That will get promoted as well. The algorithm will continue to evolve over time, learning as you use it. We won’t hide any activities from you—they’ll all be in your feed, just in a different order designed to ensure you don’t miss the items that matter most to you.

Over two years later, Strava has finally acknowledged its mistake and brought back a chronological feed ordering option. Those who like the random nature of the algorithm, which had the effect of putting workouts and races in an unpredictable order and preventing many from being seen, can stick with it.

But if you, like most people, think of events as happening in a linear chronological progression, you can switch back to a Last Updated ordering. In Strava on the Web, click your avatar in the upper-right corner and then navigate to Settings > Display Preferences > Feed Ordering, where you can select Latest Uploads. 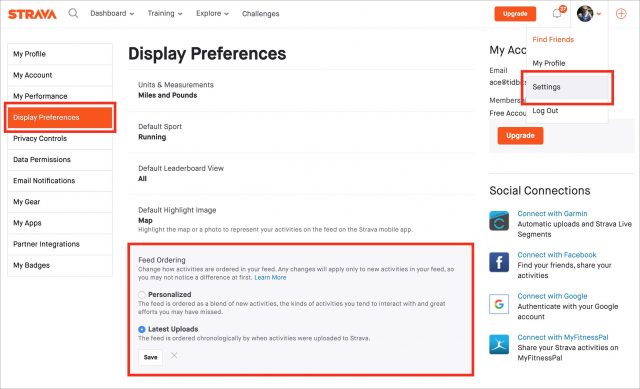 Strava’s claim was that the algorithmic sorting of the activity feed was helpful because people weren’t seeing a lot of their friends’ workouts. That may have been true, but by removing the only hint (time) that users had as to whether or not they’d seen all they wanted, Strava turned a deterministic listing into one that was entirely unpredictable. Perhaps the algorithm was just lousy, but complaints about it occupied many of my group runs at the time. It was all unnecessary—Strava could have provided this option when it introduced the algorithm and made everyone happy.

The obvious solution to too much traffic in an activity feed is to reduce the input—that is, follow fewer people. It’s possible that many people have trouble culling their following list to just the people they care about most, and it’s not in Strava’s interests to encourage smaller networks within the service. Hence the algorithm rather than advice to focus.

In an effort to keep people from winnowing their following lists, Strava has added yet another new feature. You can now favorite other athletes, at which point their activities will appear toward the top of your feed regardless of whether you’ve chosen the algorithm or the chronological ordering. That could be a little confusing if it breaks the Latest Uploads order, but it could help ensure that you don’t miss workouts from key people.

Separately, you can opt to receive push notifications for activities for certain athletes, which could be a nice addition for your closest friends or relatives. You can favorite athletes and set notifications only in the app, which sort of makes sense. (If the Following button in your app doesn’t look like the screenshot below, you need to download an update to the Strava app.) 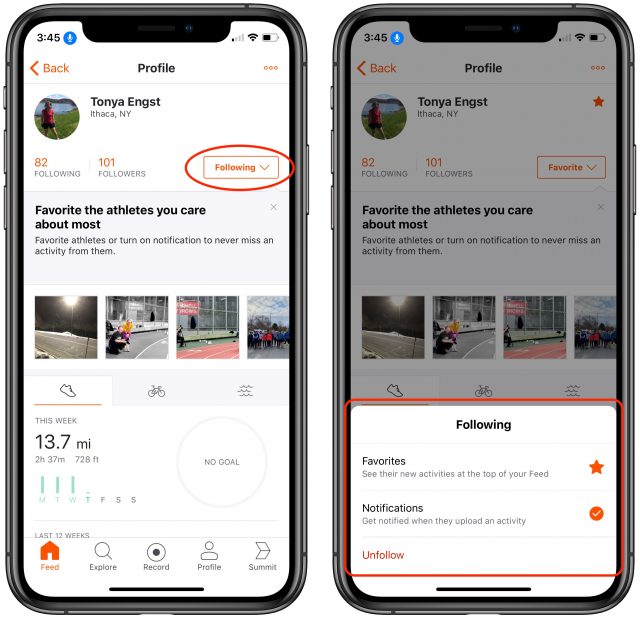 Leaderboards are one of the competitive aspects of Strava. Anyone can create a segment—some or all of a route that you’ve run or biked—and then Strava does some major data crunching behind the scenes to build a leaderboard of the people who have completed that segment the fastest. 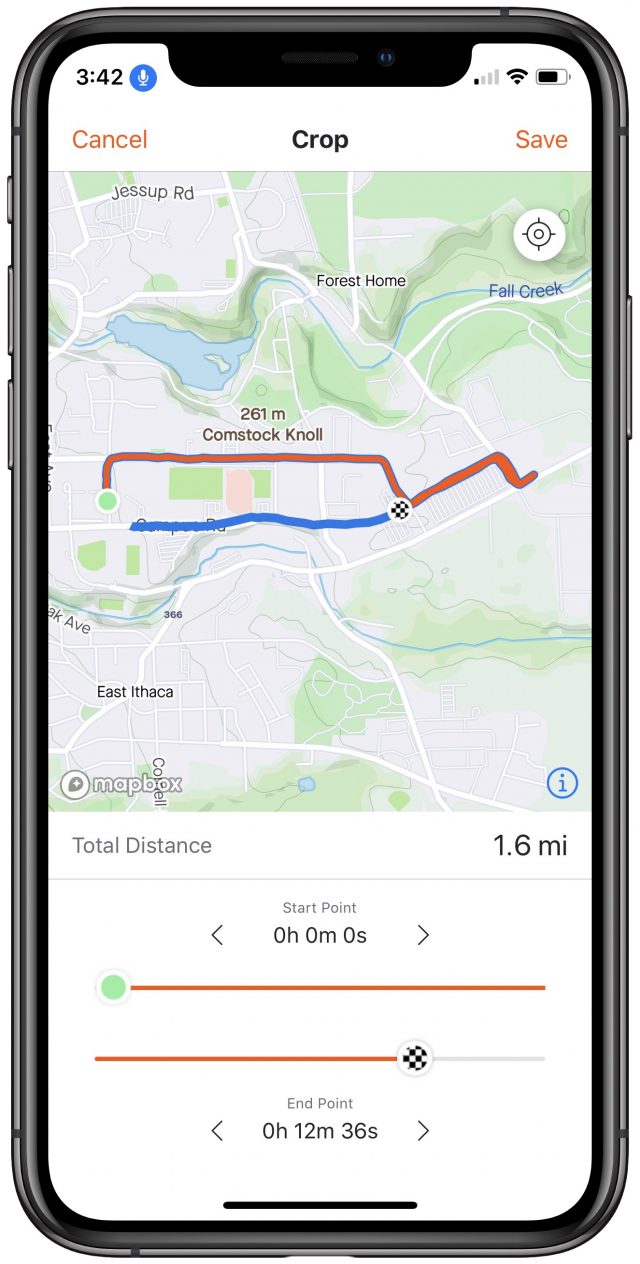 The problem with the leaderboards is that many of them are topped by inaccurate activities, mostly due to honest mistakes when someone finishes a workout and drives off without remembering to stop their watch. It has long been possible to flag such workouts as incorrect, but Strava says it will now automatically flag workouts where that happens, notifying the athlete so they can go in and crop out the extra distance.

Until recently, that cropping feature existed only in the Strava Web app, but not too long ago, the company added it to the Strava iPhone app as well. In the activity, tap the ••• button, then Crop, and then use the start and finish sliders to remove the incorrect part of the route.

For quite some time now, Strava has produced an Apple Watch app that works fairly well and syncs with the Strava iPhone app. The user experience isn’t as good as a dedicated GPS running watch, like the Garmin Forerunner 620 that I use. Still, it has improved enough that if I forget the Garmin while leaving for a run, using Strava on the Apple Watch isn’t a major hardship. Plus, data from the Strava app works its way into Apple’s Health app, if you care about that.

The new feature makes it possible to import workouts recorded with the Apple Watch’s Workouts app into Strava. It’s a manual import, though Strava should notify you when workouts are available to import. In the Strava iPhone app, navigate to Profile > Settings (the gear icon) > Applications, Services, and Devices > Health. You’ll have to connect Strava to Health the first time you do this, but once connected, you’ll start seeing activities from Workouts along with an Import link. Tap it to bring the workout from Health into Strava.

Why would you use Workouts over the native Strava app? You might just prefer its interface, but the big win that I see is that the Workouts app can detect when you start working out automatically and offers to begin a workout for you. (Before Strava’s new feature came out, I had just learned that the free RunGap app provided a similar connection between Workouts and Strava.)

I may also start using the Workouts app more frequently because I just learned that it records VO2 max, which is one of the better measurements of cardiorespiratory fitness. Measuring VO2 max normally requires running to exhaustion on a treadmill while breathing through a snorkel and stopping periodically for finger-prick blood tests—I’ve done it twice, and it’s no fun. But the few numbers I have in Health from times I’ve used the Workouts app look relatively accurate, so I may pay more attention to it once I’m training seriously again.

There are two larger points to make here. The first is that if, as a company, you do something that your users hate, such as the algorithmic feed, don’t pretend that you know what they like better than they do. Behavior like this is one of the reasons I and many others have never subscribed to Strava’s premium services. Why would we want to support a company that doesn’t care about its customers’ opinions?

Second, I think too many tech companies assume that machine learning systems can reveal information about us that even we don’t realize. That may be true in some areas, but there are certain truisms of the human experience that are hard to trump. Chronological ordering is one of them—we all instinctively understand that some events take place before others. Alphabetical ordering is another one—the iOS Settings app remains harder to navigate than is necessary because Apple has organized it according to some unknown and non-obvious heuristic (see “Bad Apple #2: Alphabetize Settings in iOS,” 21 February 2018).

Allowing its users to revert to the chronological feed isn’t the only change Strava made recently. In late February, the company also finally backed down on a long-standing argument with users about whether it should show moving time or elapsed time in various places. This matters because watches sometimes lose GPS lock and stop recording movement briefly; Strava sees that time as paused, such that “moving time” can often be quite different from total “elapsed time.” I encountered this problem in a track race where Strava got my time quite wrong because the watch didn’t get a GPS lock for the first 2 seconds of the race.

Now, if Strava responds to my 5-year-old suggestion (with 162 comments and 224-vote score—feel free to pile on!) to display data from sports other than running and biking in the Multi-Sport view of the training log, I promise to subscribe to the premium services immediately.

Comments About Strava (Finally) Listens to Its Users, Brings Back Chronological Feed