Apple’s sudden announcement of trackpad support in iPadOS and the Magic Keyboard for the Face ID models of the iPad Pro came as a surprise (see “Hell Freezes Over: Apple’s New iPad Pro Supports Trackpads,” 18 March 2020). New hardware is always tempting, but I still have a Touch ID-based 10.5-inch iPad Pro and don’t have much reason to upgrade, so I decided to try the Logitech Combo Touch keyboard case, which is also equipped with a trackpad.

There aren’t many products that I try and instantly say, “Wow, this is awesome! I can’t wait to tell TidBITS readers about it.” But the Combo Touch, which comes in models appropriate for the seventh-generation iPad, third-generation iPad Air, and 10.5-inch iPad Pro, is one of those products. It’s sold out on the Logitech site, but Apple has some in stock.

Strangely, the Combo Touch isn’t available for the 11-inch or 12.9-inch iPad Pro. A little birdie told me that Apple discouraged Logitech from supporting those models so as not to compete with the Magic Keyboard. After just a few hours with the Combo Touch, I see why Apple might have been worried about the competition, and I think a lot of iPad Pro users will be envious of those of us who can use the Combo Touch.

Let’s start with the price. The Magic Keyboard is either $299 or $349, while the Combo Touch costs only $149.95. Despite being half the cost, the Combo Touch doesn’t feel at all cheap. The case is covered in a fabric material that feels nice and sturdy. 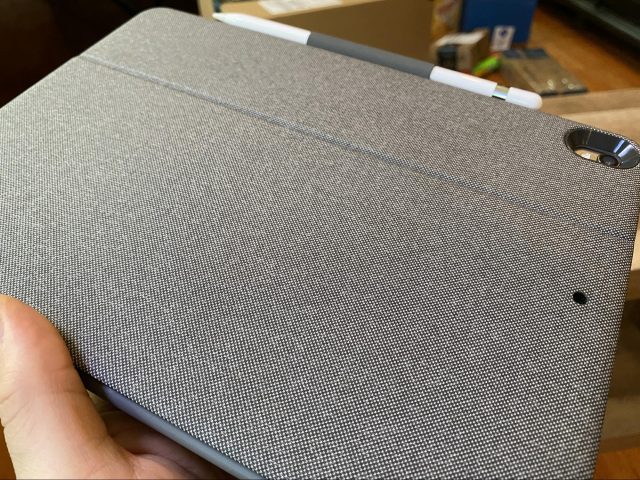 Another win for the Combo Touch is that it includes function keys for Home, brightness, the onscreen keyboard, Spotlight search, keyboard brightness, media controls, volume, and locking the screen. 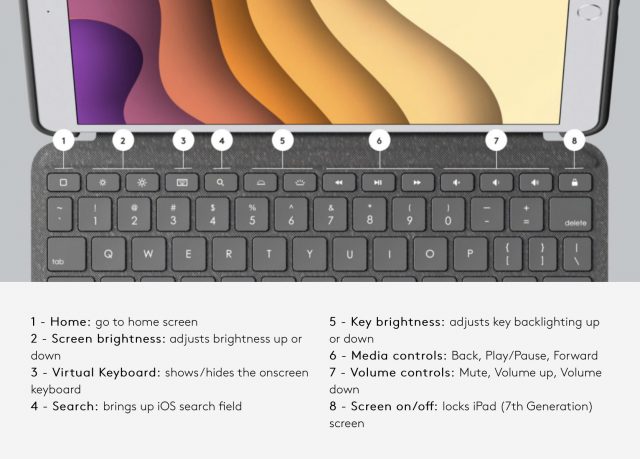 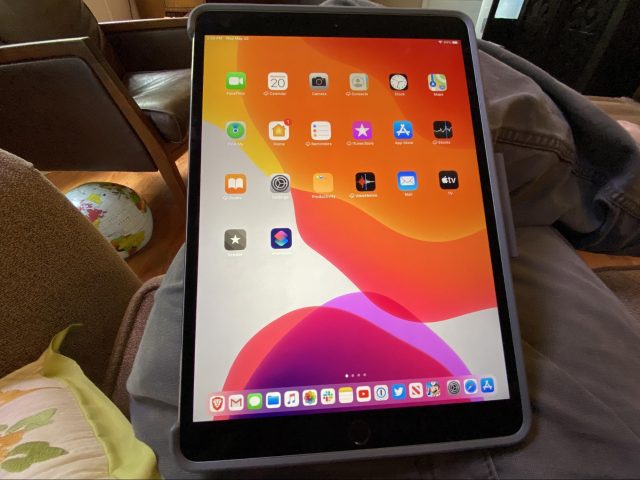 An Overview of the Combo Touch

The Combo Touch consists of two parts: a back cover and the keyboard. The rubbery plastic cover fits around the iPad and protects the back and three edges. The edge with the Smart Connector side remains open, so the keyboard, a separate unit, can snap onto the iPad. On the opposite side is a loop to hold an Apple Pencil.

A kickstand on the back of the case adjusts up to 40 degrees and can be used at any angle within that 40 degrees. The Combo Touch is not nearly as adjustable as the Magic Keyboard, but it’s still surprisingly comfortable in my lap. 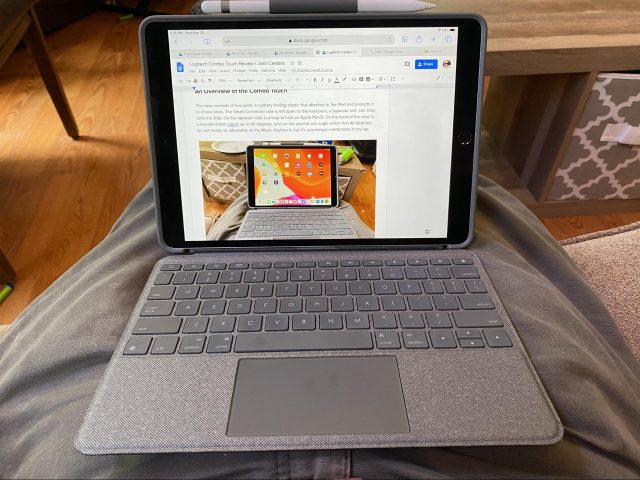 You can also bend the kickstand the other way to prop the iPad up like an easel. 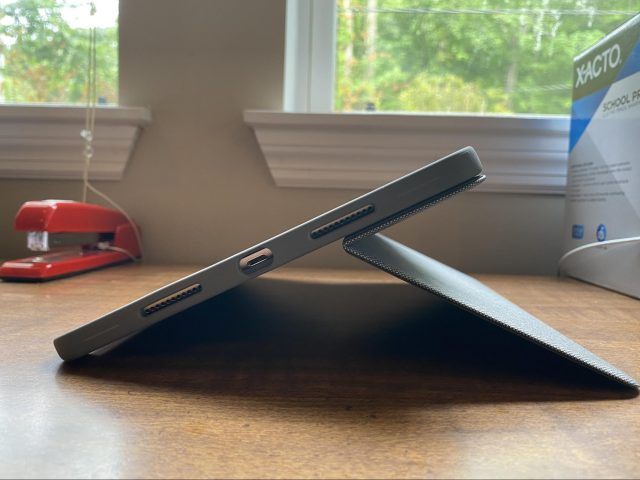 The keys are backlit, which makes the Combo Touch easier to use in a dim room. A Logitech Control app lets you set five levels of brightness, and you can turn off the backlight entirely if you wish. iPadOS prompted me to install the app, which was something I hadn’t seen before with a hardware companion app. 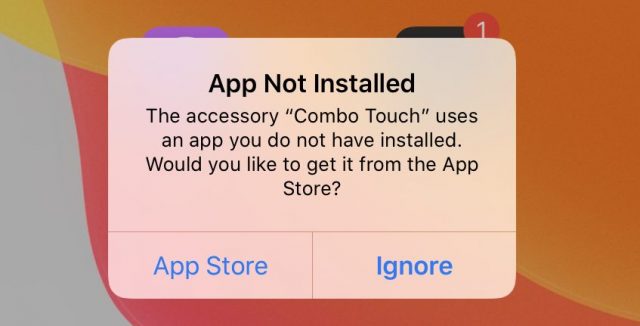 Some may be sad that the Combo Touch lacks an Escape key. Instead, you’ll find a Home key where Esc would normally be. I like the Home key because it enables me to keep my fingers on the keyboard and away from the screen. If you need an Escape key, which isn’t generally used in iOS, you can redefine another key, like Caps Lock. Do this in Settings > General > Keyboard > Hardware Keyboard > Modifier Keys.

As far as the feel of typing on the keyboard goes, it’s fine but nothing special. The chiclet keys are neither spongy or especially clicky, and the keycaps feel just a bit rubbery. The keys don’t wiggle and feel solid when you press them.

The Combo Touch is necessarily a small keyboard, which entails a few sacrifices. I’m not crazy about the arrangement of the arrow keys, which follow Apple’s old and much-maligned butterfly keyboard convention of half-size keys for the Up and Down arrows and full-size keys for Left and Right. The backtick, bracket, and backslash keys are also narrow, which is less of a problem. 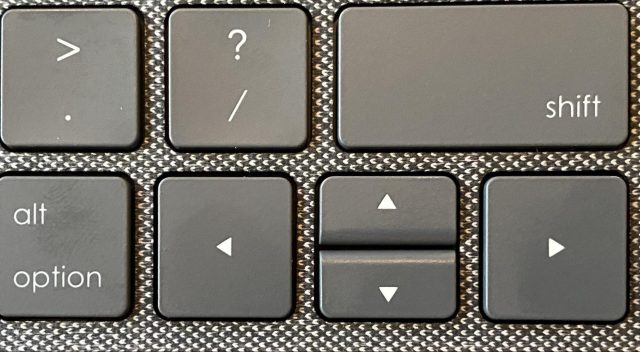 But the keyboard isn’t what makes the Combo Touch interesting.

I’ve heard little good about the Brydge Pro+ trackpad case from Brydge, which made me a bit nervous about the Logitech Combo Touch, but there was no need to worry. The Combo Touch’s trackpad is a bit small, as is the one on the Magic Keyboard, but it’s plenty responsive, and all the expected gestures work. I measured it at 3.8 inches (9.5 cm) wide and 2.1 inches (5.4 cm) high.

Unlike Jason Snell’s poor experience with the Brydge Pro+, using the Combo Touch trackpad is as smooth and precise as the Magic Trackpad 2 on my iMac. Swipe with two fingers to scroll up and down a Web page, swipe up with four fingers to bring up the app switcher, or swipe left or right with four fingers to switch apps. It’s a trackpad that lives up to Apple’s high standards.

The Combo Touch’s trackpad might be a bit small, but it’s just big enough for four-finger gestures with my average-sized hands. If you have Jack Reacher hands, it might be a bit too cramped for you, but if you think the MacBook Pro trackpads are too big, you’ll probably love it.

The trackpad functionality does a lot to make the iPad feel like a “real” computer. I’m typing this review while leaning back on the couch, and I hardly have to reach for the screen at all. But when I want to reach out and touch something or scribble with the pencil, I can.

What’s funny is, despite my total lack of drawing skills and handwriting that would make a doctor wince, I find myself using the Apple Pencil a lot more with the Combo Touch. Not for drawing or writing but as a pointing stick to tap onscreen elements so I don’t have to reach for the screen. Using the Apple Pencil this way feels just as intuitive as using the trackpad. The Combo Touch makes the whole iPad package really sing, letting me effortlessly mix keyboard, trackpad, touch, and pencil input.

When I sat down to write with my new Combo Touch, I was frustrated by its inability to type an apostrophe. Bizarrely, the double-quote, which is on the same key, worked fine. At least that indicated that it wasn’t a hardware issue.

After a bit of research, I learned that this problem has afflicted previous Logitech keyboards as well. The fix is to go to Settings > General > Keyboard > Hardware Keyboard (which appears only if a hardware keyboard is attached) and change English (US) from Automatic to U.S. or your preferred language. Of course, if you are outside the United States or use a different language, those options will be a little different. That fixed it.

With that solved, my only real complaint is that the keyboard’s Smart Connector magnetic connection isn’t as strong as I’d like. Pick up the whole assembly by the iPad, and the keyboard will fall off. Needless to say, I recommend closing everything up before moving it to avoid potential drops to the floor.

I also find that the pencil loop can get in the way when using the iPad in portrait orientation, and I worry about the loop’s long-term durability. But I’m just happy to have a case that keeps the round Apple Pencil from rolling away.

So Good It’ll Make You Want an iPad Air

I heartily recommend the Logitech Combo Touch. It will breathe new life into your iPad, and it’s so good that it makes Apple’s current iPad Air significantly more attractive in comparison with the iPad Pro.

My wife recently decided to replace her nearly decade-old MacBook Pro with an iPad. After just a few minutes with the Combo Touch, she declared that she preferred the Combo Touch and wanted an iPad Air instead of a much more expensive iPad Pro and Magic Keyboard combination. That saved us about $450. If Apple’s plan was to discourage Logitech from making an iPad Pro keyboard in order to sell more Magic Keyboards, it may have backfired.

So now I have not just one, but two Logitech Combo Touch keyboards in the house. 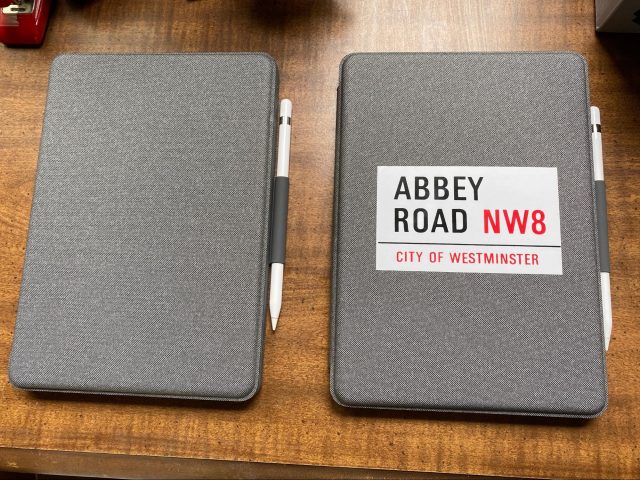