Back in the early days of the Mac, the hardware was relatively crude compared to what we have today. That’s not meant as a criticism, merely a statement of fact—industrial design and manufacturing capabilities have come a long way since the mid-1980s. But while the software of the time may have had fewer features and could be weighed down by the slow disks and chips of the time, Apple’s Human Interface Guidelines helped ensure a high level of overall quality. Violations of the HIG or failure to abide by interface conventions were reported as bugs and noted in reviews, even down to little things like keyboard shortcuts in dialogs. Attention to detail mattered. Craft mattered.

That’s the backdrop to Craig Mod’s essay, “Brilliant Hardware in the Valley of the Software Slump,” which points out a few of the ways that a lack of software quality and reliability is now hanging around the neck of top-notch hardware. So many little things are wrong in modern software that would never have been tolerated in the past. Examples from the last few hours include the inability of Messages to remember its window position between launches on a secondary display and the choppy scrolling and the lack of support for the Home and End keys in Apple News. Let’s hope Mod’s call for a return to craft rattles some windows in Cupertino and among Apple developers in general. 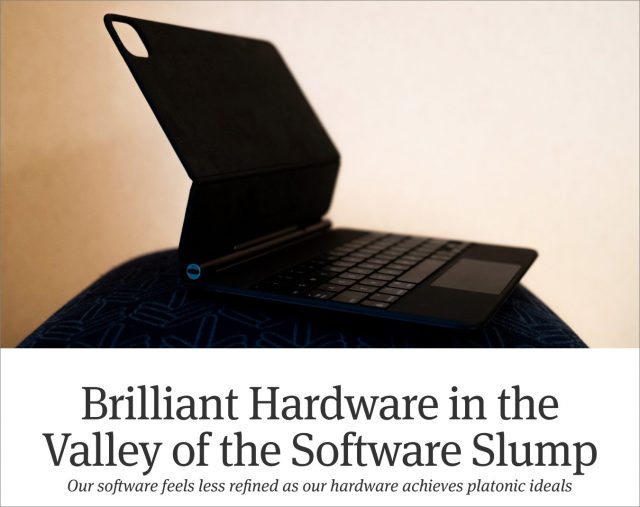