In the Worldwide Developer Conference keynote, Craig Federighi, known to some as Apple’s senior vice president of Software Engineering and others as “Hair Force One,” whipped through a summary of the changes coming later this year to the next version of macOS, dubbed macOS 11.0 Big Sur.

The most noticeable change to long-time Mac users is a revised Finder interface in Big Sur. Gone is the gray metal window framing that has been around in one shade and texture or another since the Mac first did color. The new Finder takes some design notes from the Files app in iOS/iPadOS, presenting both title bars and toolbars with plain white backgrounds (or dark backgrounds at your choice). Other window features rely upon different visual indications, such as a Finder window sidebar that’s more translucent than ever.

Sidebars in general have received design tweaks in all of Apple’s apps, with the goal of reducing clutter and enhancing functionality. The Finder windows are also more gently curved and, courtesy of the plain framing, look less cluttered. Similarly, Apple has tweaked the Dock in Big Sur to be more translucent and has lifted it slightly from the bottom of the screen to float just above it, as in iPadOS. We’ve seen no word, yet, whether that separation from the screen edge persists for those who prefer the Dock placed on the left or the right. 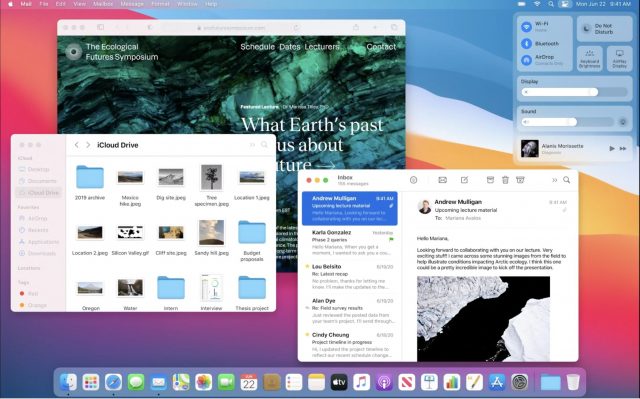 Apple has also redesigned the icons in the Dock (and in Finder windows). They have subtly enhanced shading and coloring, a shift back to a three-dimensionality that many icons lost in the great Anti-Skeuomorphism Revolution that revamped iOS back in version 7 and migrated to the Mac soon after.

Sheets (those alerts that drop down from the top of a window and demand you do something) now appear accompanied by a dimming of the rest of the display to help you notice that your attention is being requested. They center themselves better in app windows as well.

Accompanying these visual changes is a big push toward interface consistency, with the symbols used for buttons, like Share or Undo buttons, all drawn from a single unified symbol collection. The hope is that developers will be less likely to come up with weird non-standard button icons that leave users guessing what that shape is supposed to mean.

Big Sur wants to tickle your ears as well as your eyes: Apple claims to have updated its system sounds: they may sound familiar (being based on snippets of the earlier sounds) but have been completely regenerated.

macOS has long had a hidden interface item stashed behind the right side of the screen that can pop out when some users least expect it: Notification Center. It lists recent notifications you have received and supports useful widgets, like a calendar or a weather widget, which can notify you of upcoming appointments and thunderstorms.

It’s unclear to us how many Mac users rely on Notification Center in a big way (many of us don’t), but Apple says that Big Sur enhances Notification Center’s capabilities in several ways, bringing it more in line with what iOS provides.

First, notifications in Big Sur gain increased interactive capabilities, allowing you to take action on some notifications. For example, pressing and holding a notification can bring up more information, or, in the case of a Mail notification, allow you to begin a reply. Some of that has been available for a while; we’ll see if the improvements are compelling. Second, just as in iOS, notifications are now grouped by thread or app, which should bring some order to the chaos of a Notification Center overwhelmed by Slack. You can turn that feature off if desired. 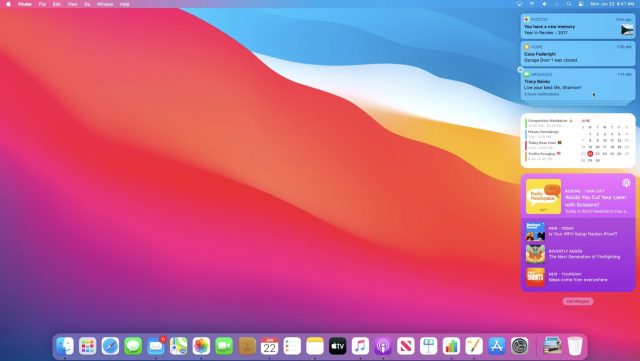 Along with Notification Center, Apple has brought Control Center over from iOS. It consolidates many of your menu bar items into a single place so you can access them without opening System Preferences. As in iOS, you can customize Control Center with just the controls you want and dig into specific controls for additional options. For faster access, you can pin your most-used menu items to the top of the menu bar.

How Large of a Change Will Big Sur Be?

For many years, Apple took a “tick-tock” approach to macOS releases. Leopard and Snow Leopard, Lion and Mountain Lion, Yosemite and El Capitan, Sierra and High Sierra. However, that’s fallen away with Mojave and Catalina, and Big Sur seems to be continuing the trend of an independent release that’s more than just a refinement of the previous version.

The bulk of the user-facing changes in Big Sur’s apps and related ecosystem aren’t particularly large, but that’s unsurprising given the elephant in the developer meetings—the switch to Apple silicon (see Adam Engst’s coverage in “Macs Make the Move to ARM with Apple Silicon,” 22 June 2020). Apple has had to recompile every one of Big Sur’s apps for Apple silicon, and while the company implies that’s easy, it’s still a massive undertaking when measured across all the apps that ship with macOS.

Plus, of course, the most significant changes are under the hood in Big Sur: the code necessary to run on Apple’s custom chips, the new Rosetta 2 translation environment necessary to support existing apps, and the Universal 2 approach to bundling the code for Intel-based apps and apps written for Apple silicon into a single package.

It’s essential that Big Sur works well when it ships later this year, and particularly that it works well on whatever the first Mac is to employ Apple silicon. Catalina has been a troubled release, and even as we head into another macOS development year, we hear from people who continue to worry about upgrading to Catalina. Lots of people will skip Catalina entirely and pin their hopes on Big Sur, so we’re hoping that Apple does a much better job of testing and polishing Big Sur than it did with Catalina.

Comments About Apple Takes macOS to Big Sur… and to 11