In the WWDC 2020 keynote, Apple finally put the rumors of a Mac processor transition to bed with the announcement that indeed, Apple is designing ARM-based chips expressly for future Macs. As expected, Apple explained the move as a way to get the highest performance per watt, support Apple’s custom technologies, and have a common architecture across all Apple products. 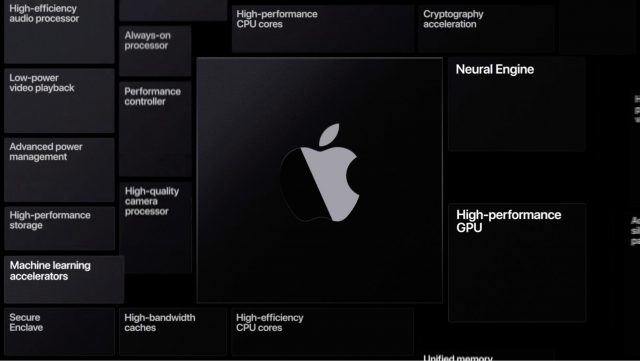 The company has been designing its own custom chips since the initial release of the iPhone, and in 2013, launched the A series with the A4 in the iPhone 4 and original iPad. With the release of the third-generation iPad, Apple introduced the first iPad-specific chip, the A5X, to pair with the iPhone 5’s A5. Since then, Apple has put the A#X chips in iPad models designed for high-performance tasks.

It’s possible that Apple telegraphed the transition to the Mac on nomenclature alone, given that the A12 Bionic that debuted with the iPhone XS was then bumped to the A12X for 2018’s iPad Pro models, and later superseded by the A12Z Bionic for 2020’s iPad Pro models. Apple is now using that A12Z chip in the Mac mini-based Developer Transition Kit (DTK) hardware that developers can use to develop and test their apps, so it clearly has sufficient performance to run macOS and demanding apps.

The primary stress of a processor transition revolves around compatibility. Developers don’t want to have to write and distribute two completely different apps, and users want to keep using their existing apps to the extent possible. Unsurprisingly, Apple attempted to set those worries to rest, although the devil is always in the details, which won’t be known until developers dig in on the DTK hardware.

First, Apple took pains to note that all its macOS apps have been rewritten to be native to Apple silicon. That includes pro apps like Final Cut Pro and Logic Pro. App performance during the keynote demos was entirely fine, and the company only acknowledged during the final segment of the keynote that the earlier parts had been running on a Mac using Apple silicon, likely the A12Z-powered DTK hardware.

WWDC is, of course, a developer conference, and Apple said that its Xcode development environment contained everything developers would need to recompile their apps for Apple silicon. The specifics will vary by app, but Apple claimed that many developers could get their apps running in a few days. Testing may take quite a bit longer, though, since it will have to happen on both platforms. As happened in previous processor transitions, Apple seeded some key developers ahead of time and was thus able to show the Microsoft Office apps (Word, Excel, and PowerPoint) and Adobe Photoshop and Lightroom running as native apps.

Separate apps for Intel and Apple processors make no sense, so Apple has come up with Universal 2, a way of combining both sets of code for an app into a single file. It was a little surprising that Apple reused the terminology from the Intel transition, when a “universal” app contained both PowerPC and Intel code. Jim Rea, developer of Panorama X, tells us that size is not likely going to be an issue with universal apps since the machine code that differs between platform is usually a minor contributor to the overall size of a modern app, particularly when compared to images, menus, help documents, and so on. Nonetheless, we suspect you won’t be able to switch a boot drive between an Intel-based Mac and a Mac using Apple silicon seamlessly, or perhaps at all. 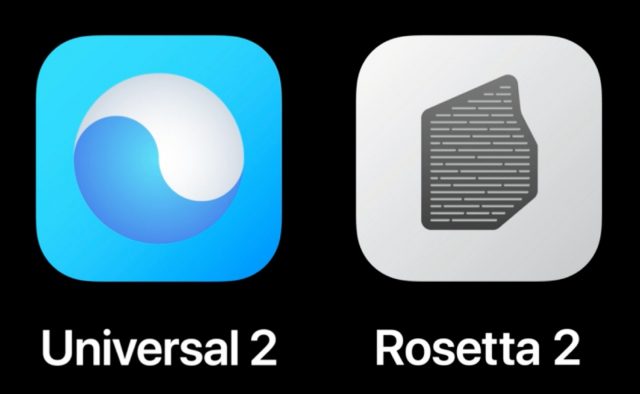 What about existing apps? In the Intel transition, those were supported by the Rosetta translation environment, which translated the PowerPC code in older apps to run on Intel-based Macs. It shipped with the first Intel-based Macs in Mac OS X 10.4 Tiger in early 2006 and remained part of the operating system until 10.7 Lion shipped in mid-2011, over five years.

In the same vein as Universal 2, Apple said that Rosetta 2, shipping with macOS Big Sur later this year, would enable existing Intel-based apps to run on Macs with Apple silicon. Rosetta 2 automatically translates existing apps when you install them so you’re not taking a performance hit on every launch. Some apps rely on just-in-time code, though, and for those, Rosetta 2 does dynamic translation on the fly. Apple said that Rosetta 2 would be completely transparent to users—you shouldn’t notice it running at all.

We hope that’s true. Translation environments always come with two tradeoffs: compatibility and performance. With regard to compatibility, although Apple implies that Rosetta will support all existing apps, that’s undoubtedly only 64-bit apps that already run in macOS 10.15 Catalina. Lower-level software, like kernel extensions and drivers, is less likely to be supported, but we won’t know until people with the DTK hardware start reporting back.

Performance, Apple said, was “amazing.” You’d expect Apple executives to say nothing else, and the demos of Autodesk’s 3D modeling app Maya and the Shadow of the Tomb Raider game both ran well enough, though it was hard to be sure given the limitations of streaming. Will that carry over to all apps? And how will that performance compare to running on an equivalent Intel-based Mac? For those answers, we’ll have to wait a bit.

What about virtualization? Apple’s executives made sure to say that Macs with Apple silicon would support virtualization and went so far as to show Parallels Desktop running Linux in a window. Even though they mentioned Linux a couple of times, often in the context of developers (it is WWDC, after all), they said absolutely nothing about Boot Camp or virtualizing Microsoft Windows. There is a version of Windows for ARM, and we fully expect Parallels and VMware to support it, but it comes with a long list of restrictions.

But wait, there’s one more thing, and I mean that in the full Steve Jobs sense of the phrase. The beauty of that A12Z chip in the DTK hardware is that it’s exactly the same chip that powers the current iPad Pro models. And thus, all iPhone and iPad apps will be able to run natively on a Mac with Apple silicon. That was a quick comment during the keynote, but I think it could be a huge selling point. Lots of iOS and iPadOS apps don’t make sense on the Mac, but plenty do. Apple showed them each in their own window, just like little Mac apps, but I could imagine a utility that would let you put them in the Mac’s menu bar, accessible with a single click. Hmm…

When can you expect to buy a Mac with Apple silicon and see how it runs your apps? Apple said that the first such Mac would ship by the end of 2020 but gave no details as to where in the product line it would fit.

Speculation has suggested it would be a lower-end laptop, but some of the things Apple was demoing on the A12Z-based DTK hardware during the keynote (and on a 6K Pro Display XDR) were more on the pro side of the equation. So it’s possible that Apple would roll out the DTK Mac mini as the official Mac mini with Apple silicon. Might Apple take the opportunity to come up with some new names? We’ll see, likely in mid-December, if Apple’s past promises of “by the end of the year” hold true again.

The overall transition, Apple said, would take about two years. By that, we suspect the company means, “the point at which all current Macs in the lineup are based on Apple silicon.” During the keynote, Apple executives took pains to emphasize that the company will continue to support and release new versions of macOS for Intel-based Macs “for years to come.” Plus, Apple has “exciting new Intel-based Macs in development.” So there’s no reason to avoid buying an Intel-based Mac now if it’s likely to meet your needs for the next 3–5 years.

That timeframe is a bit longer than the switch from PowerPC to Intel. Steve Jobs announced that at WWDC in 2005 (see “Apple to Transition to Intel Processors,” 6 June 2005) and he introduced a new iMac and MacBook Pro with Intel processors at Macworld Expo the following year (see “Intel-Based iMac and MacBook Pro Ship Earlier than Expected,” 16 January 2006). If I remember correctly, all new Macs in Apple’s lineup were using Intel processors by the end of 2006.

The Mac Pro and iMac Pro may take longer to transition to Apple silicon because they sell in small quantities and because it’s more important for Apple to transition the core of the product line first.

Is this a good move on Apple’s part? Absolutely. It undoubtedly won’t be as seamless a transition as Apple implied during the keynote, and I’m sure the people who complain about everything Apple does won’t be happy because they never are.

But technology never stands still, and as David Shayer outlined recently in “The Case for ARM-Based Macs” (9 June 2020), transitioning the Mac to Apple silicon gives the company higher margins and more control over its supply chain. Simultaneously, it should give us users Macs with higher performance and significantly more capabilities, thanks to the support for all iPhone and IPad apps.

Comments About Macs Make the Move to ARM with Apple Silicon