Apple’s Find My service lets you keep track of your iPhone, iPad, and even Apple-using friends and family. In the future, you might be able to use Find My to track your keys, glasses, and even your cat—that’s unrealistic. Let’s say your dog.

By late 2020, makers of wireless-equipped accessories should be able to make use of Apple’s crowdsourced Find My system for lost and stolen hardware. The Find My update in iOS 13 and macOS 10.15 Catalina allowed Apple hardware that couldn’t connect to the Internet to use Bluetooth to broadcast an encrypted identifier that nearby Apple laptops, iPhones, and iPads could securely relay along with location information to Apple servers. That update also added a standalone app to macOS; previously, Mac owners had to use the iCloud Web site. (See “How Apple’s New Find My Service Locates Missing Hardware That’s Offline,” 21 June 2019.) 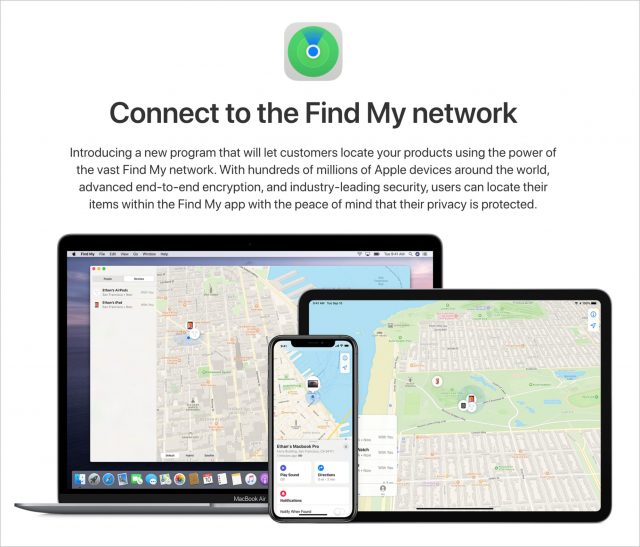 In a FAQ about letting third-party accessories participate in the Find My system, Apple said that the final specification would be available by the end of 2020. Manufacturers will have to meet a number of hardware requirements and join Apple’s MFi program for iPhone, iPad, and iPod touch compatibility.

Why Open Find My?

Many details remain publicly unanswered. Apple offers a draft specification behind a non-disclosure agreement that may provide additional insight into hardware requirements and features that developers can implement. For instance, while Apple uses Bluetooth in the current Find My to allow a Mac, Apple Watch, iPhone, iPad, or iPod touch to broadcast its identity, the iPhone 11 and iPhone 11 Pro also have ultrawideband (UWB) wireless, a short-range technology the company uses to provide pinpoint directionality within a space. (With one of these iPhones, use any Share sheet to open AirDrop and point it at another iPhone 11 or 11 Pro. The person who owns that phone will appear first in the AirDrop list.)

Given how many people use (and lose) Bluetooth headphones and earbuds, including Apple’s AirPods and various Beats listening devices, Find My support for more devices will help people locate relatively expensive gear that’s easily left behind or stolen. (Apple supports Find My for AirPods currently, but it works only if one or both in a set are out of their case and near a paired iPhone, iPad, or iPod touch.)

Third-party support could also take the sting out of Apple introducing standalone tracking tags that will also work with Find My. Such trackers have been rumored for years—most recently under the name AirTags—based in part on traces in company screen captures and software. They apparently will rely on UWB using Apple chips, allowing battery efficiency and data exchange.

Apple’s purported AirTags would compete directly with products from Tile, a company that has made Bluetooth-based trackers for years. Tile has built its own crowdsourced tracking system for finding missing items with Tile tags attached. Tile vice president and general counsel Kirsten Daru testified in front of Congress in January 2020 about Apple reducing access to location and continuous-tracking features Tile needed and denying access to UWB, even without a competitive product appearing. Daru said:

Apple is acting as a gatekeeper to applications and technologies in a way that favors its own interests.

Every company tries to act in its own interests, with a few exceptions, but Apple’s tight control over access to a large set of users and devices provides it a particularly unequal advantage in the mobile world. Competition is a healthy way to trigger improvement in products and often results in lower prices or more features. Giving Tile access to what Apple describes as “hundreds of millions” of Apple devices updated for the current Find My would reduce any sense of anti-competitive behavior while enhancing Tile’s value to Apple equipment owners.

How Find My Works

The current Find My system works among devices logged into the same iCloud account, with cryptographic information transferred among those devices without Apple having unencrypted access to any of it. When a device can’t connect to the Internet, it begins broadcasting a cryptographically derived Bluetooth ID that provides no information to anyone around it and can’t be matched to the owner’s account. (Apple doesn’t describe how these broadcasts initiate but, based on the company’s documentation, it’s how I infer the system works since you can’t mark a device lost or stolen when it’s unable to connect to the Internet.)

Any Mac, iPhone, iPad, or iPod touch with the latest operating system installed recognizes that form of Bluetooth ID and uploads it to Apple along with its own current location (from GPS, Wi-Fi, cellular towers, or some combination thereof).

Marking a device as lost in a Find My app triggers the upload of account-based cryptographic data stored on each device in the iCloud account set that allows Apple to find any similarly encrypted Bluetooth IDs, all without revealing secrets. Bluetooth IDs that match are downloaded to the device from which the user marked their hardware as lost. That device’s app decrypts the IDs and uses them to plot locations of the missing hardware. If this sounds similar to Apple and Google’s anonymized COVID-19 notification system, that’s because it’s built on the same general idea (see “Apple and Google Partner for Privacy-Preserving COVID-19 Contact Tracing and Notification,” 10 April 2020).

It’s almost always a good thing when Apple opens up its ecosystem. The company usually pays close attention to privacy and implementation details that enforce a better user experience. In this case, opening the Find My network could save many people the cost of lost hardware and increase competition, all without jeopardizing the system’s utility or our privacy.

Comments About Apple Opens “Find My” Crowdsourcing to Third-Party Accessories