We also wanted to get your opinions on how Apple is running the App Store and treating developers. It turns out that, although TidBITS readers are largely critical of how Apple runs the App Store, they’re also against government regulation as a solution. Let’s dig into the survey questions and your responses.

Are you bothered by the App Store’s restrictions?

We asked an admittedly broad question: Are you bothered by the App Store’s restrictions? That could include any number of issues we outlined, such as prohibitions on certain types of apps, removing apps Apple finds objectionable, etc. Apple is unapologetic about this, claiming that the restrictions are in place to protect its users and maintain high quality.

So we were a bit surprised by the strong response from our readers: a whopping 65% of TidBITS readers said they were bothered by App Store restrictions, with only 35% unbothered. 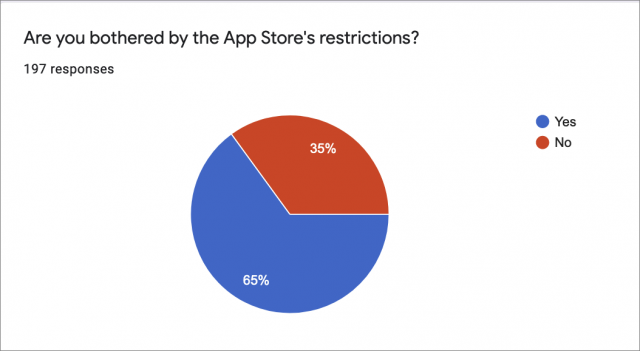 This was especially interesting, given that our audience tends to lean older and toward cautious usage patterns, and Apple is being too restrictive even for them. Maybe it’s time for Apple to ease up a bit.

Are you in favor of government regulation of the App Store?

Yet another overwhelming response: No. In fact, at 65% against and 35% for, the numbers are almost identical to the responses about App Store restrictions. TidBITS readers may find the App Store to be too restrictive, but they don’t want the government stepping in and dictating how Apple should run it. 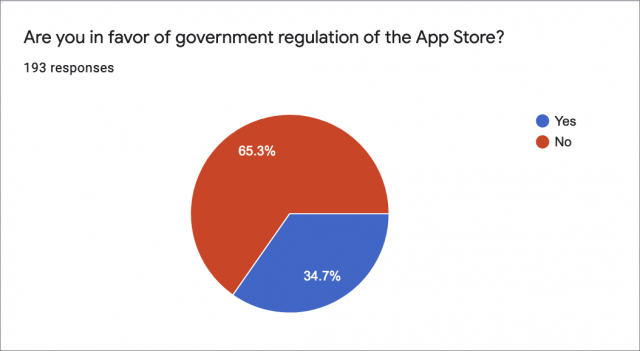 We share that concern. While regulators may mean well, government officials are often uninformed and confused. The most comprehensive plan proposed so far, at least as it relates to Apple, is from Senator Elizabeth Warren (D-MA), who wants to break the App Store away from Apple.

Not only would this not solve the main issues people have, but it would also create chaos. How would it even work for another company to run the App Store? Would Apple have to allow old-fashioned software installs by default and then point people to third-party app stores? Would there be any reason for developers to use an App Store that wasn’t integrated into the entire user experience? We have no idea. Many people oppose sideloading (more on that in a moment), but making the App Store independent of Apple would take those concerns to a whole other level.

For the most part, developers aren’t upset about having to compete with iWork, News, Weather, and other Apple apps. They give users reasonable defaults, and third-parties can usually offer more-capable products. For some reason, likely ignorance, congressional representatives keep circling back to this issue, such as Representative Val Demings (D-FL), who spent much of her time with Tim Cook asking about competitors to Screen Time, a feature from which Apple derives no revenue (see “A Quick Rundown of Big Tech’s Showdown with Congress,” 31 July 2020).

Do you feel that Apple treats developers fairly?

The answer is No, by an overwhelming margin of 77% to 23%. This didn’t come as a surprise, since it’s well-known that Apple treats larger developers differently than small ones. We documented several examples in “Developers v. Apple: Outlining Complaints about the App Store.” 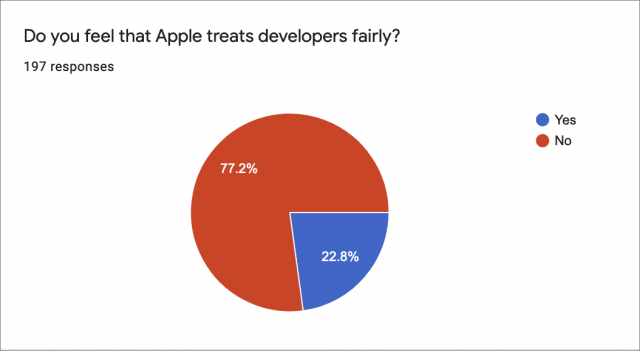 However, we have to give Apple some credit here. After Epic Games slipped in a way to buy in-app purchases in Fortnite without using Apple’s payment system, Apple not only banned the Fortnite app from the App Store, it is now threatening to terminate Epic’s developer account entirely. Apple has often taken such a heavy-handed approach with small developers, but seldom with a developer as large as Epic.

Are you in favor of Apple allowing sideloading of apps in iOS?

The answers to this question shocked me: 57% of you support it, a double-digit margin. Sideloading is controversial because it could open a vector for malware, the confusion of apps distributed outside of the App Store, and other issues. So I was surprised to see so many TidBITS readers supporting the idea. 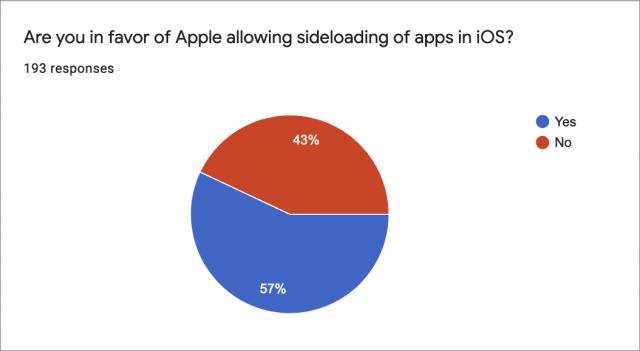 But as I pointed out in “Developers v. Apple: Outlining Complaints about the App Store,” Apple allows “sideloading” on the Mac without many malware issues, thanks to strong security features and app signing, the latter of which will be required for all apps running on Apple silicon Macs.

In theory, allowing sideloading would let developers sidestep all of the App Store complaints. Apple could simply say: “Don’t like the App Store rules? Distribute your app on your own.”

It’s a nice theory, anyway. One of the bizarre twists in the recent Epic Games versus Apple drama is that while Epic sued Apple, demanding that Apple allow Epic to sideload its games in iOS, Epic also sued Google, which already allows sideloading on Android. Apparently, Epic didn’t think sideloading worked sufficiently well to stick with it instead of putting Fortnite in the Google Play Store.

Apple has since submitted emails between itself and Epic Games as evidence, which shed some light on the situation. Here’s what Epic really wants: to have its own store, which shares no revenue with Apple, and for Apple to distribute that independent store in the App Store.

That’s bonkers. If Apple acquiesced to that demand or was forced to, app discovery and acquisition would become complete chaos, as every developer would scramble to create its own App Store or join cheaper ones.

Surely Epic Games understands how destructive this is. Imagine if Valve, a gaming company that distributes software through its Steam service, sued to force Epic to publish Steam in the Epic Games Store, without the usual 12% cut to Epic. Epic CEO Tim Sweeney would laugh himself out of his chair, but that’s exactly what Epic is asking of Apple and Google, and only Apple and Google, because Epic isn’t going after Microsoft or Sony, which have very similar terms on their game consoles. In context, it’s hard to see Epic’s “request” as some sort of fight for freedom or a business move, but rather an attempt to sabotage smartphone app stores.

There’s no making some people happy, and it’s possible that Apple allowing sideloading might not be the solution I thought it would be.

Are you in favor of Apple lowering its 30% cut of sales that take place through the App Store?

The answers here were less surprising: you overwhelmingly think Apple should lower the 30% cut it takes from most App Store transactions. Nearly 87% of you voted in favor of Apple reducing the 30%.

Granted, we don’t have the data Apple does, but most people seem to think the 30% cut is too high. If or how that gets resolved is up to Apple and regulators. And, if nothing else, it’s bad PR for Apple when such a large percentage of the company’s customers feel that it’s overcharging.

Some people have postulated that Apple could actually bring in more money by reducing the take for certain kinds of products that are currently kept outside the App Store entirely. For instance, what if Apple allowed Amazon to sell Kindle books in its iOS app for a mere 1% of the sale price? Amazon might be amenable to using in-app purchases (which isn’t true now), and Apple would have a new source of income. Similarly, in exchange for dropping the base rate well below 30%, Apple could extract a 1% tax on sales of real-world products and services, which are currently entirely free. Might that be fairer?

Of course, this poll is small and far from scientific, and Apple has no obligation to pay attention to the results, much less base business decisions on them. However, it does give us a bit of insight into how TidBITS readers are thinking about the App Store. Thanks to everyone who responded!

Comments About Your Thoughts on the App Store: Apple Should Change, but Voluntarily