Streaming your home security camera’s video to a company’s cloud storage may feel fraught. Even if you trust the company, and it properly encrypts video both in transit and at rest, the encryption keys are almost always controlled by the firm, not by you. That means employees of the company could gain access. That might be fine—you trust them, in this scenario. But then consider: anyone who obtains those keys illegitimately—a disgruntled employee, a cracker, an overweening government agency, and so on—can also see your video. They may be able to log in from anywhere in the world to view stored footage and watch your live feed, too.

Let’s also be frank. Even with everything managed perfectly, who among us really wants Amazon (Ring), Google (Home), or smaller but still massive consumer electronics firms to have streaming video access to our houses? It just feels wrong. I try to keep the so-called smart stuff out of my house, and my wife is an even bigger resister. (We do use Siri because we more or less trust Apple’s privacy stance so far, even after the company’s misleading and now corrected privacy missteps; see “Apple Workers May Be Listening to Your Siri Conversations,” 2019-07-29.)

Apple has pursued a privacy strategy for personal and intimate data that tries to walk a middle path between options unappealing to many: either storing video locally on hardware you own and have to manage and troubleshoot in your house or relying on fast broadband and cheap cloud storage to push it offsite for lower costs and better access in case of theft, disaster, or equipment failure.

Apple’s approach cleverly solves the problem by creating encryption keys on devices that rely on biometric data (backed by a passcode) and then securely storing them in the Secure Enclave built into every iPhone and iPad, and Macs with Touch ID. Since no one, not even Apple, can access those locally stored keys, the company can remotely sync and store data encrypted by those keys on its iCloud servers while providing a strong assurance of protection from crackers—or even pressure from the highest levels of domestic and foreign governments.

This is how Apple ensures that iMessage conversations can’t be read even if intercepted, and how it protects your credentials stored in iCloud Keychain. It’s how Photos syncs sensitive facial recognition data for the People album. And it’s how Apple architected HomeKit Secure Video, a feature that’s a free bonus when you pay for iCloud storage at the 200 GB or 2 TB level, whether for individual use or for a Family Sharing group. Video stored this way doesn’t count toward your storage total. However, the 200 GB plan allows just a single camera to be connected; at 2 TB, you can stream up to five cameras.

HomeKit Secure Video requires the use of a compatible third-party camera. iMore lists 11 cameras across several manufacturers that now offer HomeKit Secure Video support. Notably, once you set it up, the manufacturer can’t access the camera, and you can’t configure video-storage features or access stored video through the maker’s apps. (You may still need the vendor’s app to install firmware updates, and control and set certain camera-specific features, like pan and tilt.)

Instead, you use the Home app in iOS, iPadOS, or macOS. Over two dozen home security cameras include basic HomeKit support, like letting you control limited settings or view a live feed, but you use those cameras’ apps for most features. With a camera that supports HomeKit Secure Video, however, the Home app becomes the place you configure the camera, the source of notifications, and your hub for viewing live video or clips. Anyone on your local network can access it, although you can restrict that, too. While not all HomeKit-enabled devices need a “Home hub”—an iPad, HomePod, or Apple TV—HomeKit Secure Video requires a hub. (The bonus is that the hub enables both local and remote access.)

I purchased a Logitech Circle security camera in mid-2018 before my family left on a long trip, and the original Circle and Circle 2 (AC-powered models only) can now upgrade to HomeKit Secure Video with a beta firmware release. I recently took the plunge and have found it a generally positive change, though there are drawbacks in controlling the level of notifications and getting a broad sense of activity across time. (Logitech also now offers Circle View, its least expensive model, which works only with HomeKit Secure Video.)

Apple continually asks more of its Home app in iOS, iPadOS, and macOS, but at least—unlike the days of iTunes feature-cramming—Home is correctly limited to physical devices that enable us to control and monitor various aspects of our home. HomeKit Secure Video fits neatly into that category.

Once you’ve installed or updated a security camera that has been updated or configured to use HomeKit Secure Video, you may have to do as a little as open the Home app and configure the device. In the case of my Logitech Circle, I didn’t have to claim the device or even add it manually. It automatically appeared as an option available on the local network.

For the best experience with video, use the Home app in iOS or iPadOS. The Home app for macOS is relatively new, and few features are available in macOS 10.14 Mojave—you can mostly just view the live feed. In 10.15 Catalina, you can view clips and make some changes to settings. (I haven’t yet tested it in the upcoming 11.0 Big Sur.)

In all versions of the Home app, a thumbnail of live video from the camera appears when you open the app. Tap it, and you can access clips and more settings. I’ll focus on the iOS/iPadOS 14 version of Home for simplicity’s sake. 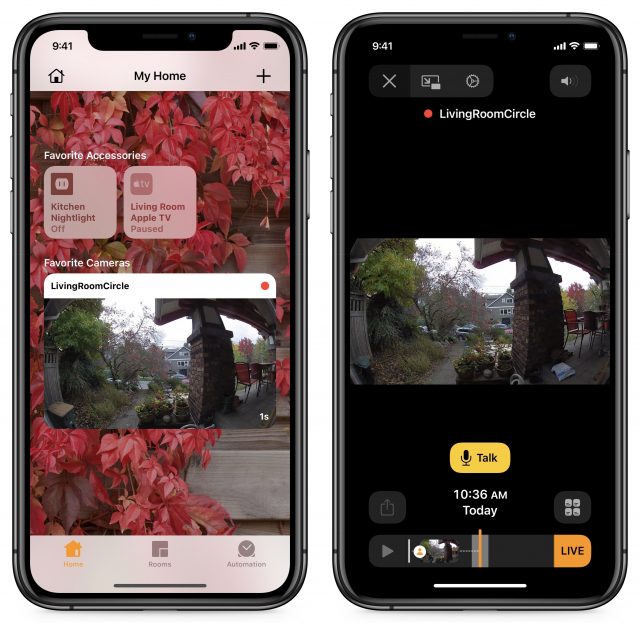 Apple designed HomeKit Secure Video around capturing video clips only when the camera detects motion. It makes this feasible by letting you mark capture zones within the field of the camera’s vision that trigger recording. The Home app sends those parameters to the Apple-compatible firmware in the camera, which relies on them for making decisions about when to record. You can set notifications separately, so you can be notified for only some of the events that trigger recordings. There’s no limit on clips, but Apple retains them on just a 10-day rolling basis.

Most people won’t want video recorded when they’re home, and the Home app can determine when you or your family members are present based on the location of everyone’s primary devices. That’s useful for some options. (In the days of COVID-19 that’s largely moot, but it won’t always be the case.)

Unusually for Apple, HomeKit Secure Video provides a huge number of options and settings, which interact in a complicated way. There’s no assistant to set up a camera for the first time, and it took me a while to figure out the ideal approach that would record just what I wanted and not notify me every few seconds.

Click the gear icon with the camera live view showing to make changes. Here’s what I choose to configure for my camera:

You review clips in the Home app. Tap the live image and you can scrub back and forth among clips all the way to 10 days before. You can also tap calendar days at the top of the window. Clips display icon tags if they record particular kinds of video, such as a silhouette of a person, animal, or vehicle. If Face Recognition is on and someone or people are recognized, their name appears as you scrub over a clip. Tap a clip and it starts to play.

You can tap the Share button and then trim a clip or send the whole thing to any destination in your Share options.

HomeKit Secure Video comes with a lot of advantages that start with privacy and security. But it’s also a win in terms of cost. While many security cameras include some cloud-based storage for free with the purchase of a camera, it’s often no more than 24 hours’ retention or has other strict limitations, such as a total number of motion-triggered clips.

In contrast, HomeKit Secure Video will store as many clips as are triggered with a rolling 10-day history at no cost above the existing payment for iCloud storage. That beats the typical charges from security-camera makers. Logitech, for instance, has two plans for its original Circle and Circle 2 cameras:

Some services are much cheaper and offer more storage than Logitech. Amazon’s Ring Protect plans allow storage of up to 60 days of clips and still images at $3 per month ($30 per year) for a single device or $6 per month ($60 per year) for unlimited devices and an option for professional alarm monitoring with an optional Ring Alarm device installed.

We have considered getting a second camera to point at another angle from our house due to increased animal and human activity. With Logitech’s service, I would have to up my $99-per year Logitech Circle plan to $179 per year. With HomeKit Secure Video, I would only have to shell out for the cost of the device.

I can only imagine that Logitech and other companies have been willing to support HomeKit Secure Video to reach customers they would otherwise miss, as well as have their products available for sale in the Apple Store and promoted by Apple as part of a home solution. That explains why Logitech created the Circle View, as something Apple can sell as an ecosystem solution with no additional configuration.

HomeKit Secure Video is especially beneficial for camera companies that just want to sell hardware and don’t want the fuss of building and maintaining the back-end infrastructure. Because costs don’t go up for owners with a 2 TB iCloud plan—and the jump from $2.99 to $9.99 per month isn’t that much in any case for the combination of storage and security camera capture—it’s an easier sell to get people to buy more cameras, too.

However, Apple also creates a situation that most equipment makers hate: all cameras that support HomeKit Secure Video are equal in the eyes of the Home app. Just as with smart switches and other devices, you can mix and match HomeKit-equipped security cameras based on the hardware features you want, since all the software options are normalized.

The deep integration across Apple’s platforms and software is also a bonus, providing more security, presence, and identity options than I would ever be comfortable with when using any other company’s products.

Since I spent two years using the fairly good Logitech Circle software, available from both a Web app and mobile app, I have a firm basis of comparison with HomeKit Secure Video. Some of the missing features are obvious shortcomings that Apple could easily add:

As a reluctant adopter of technology designed to monitor and control my home, I’m surprised at how comfortable I am with HomeKit Secure Video. Apple could further improve and refine it, bringing its weaker areas up to par with competing services. But you can’t beat a service designed to maintain your privacy and security that won’t cost a cent more for many Apple users who are already paying for additional iCloud storage.

For more about home security camera choices, privacy issues around using them, and how to make buying decisions, see my book, Take Control of Home Security Cameras. 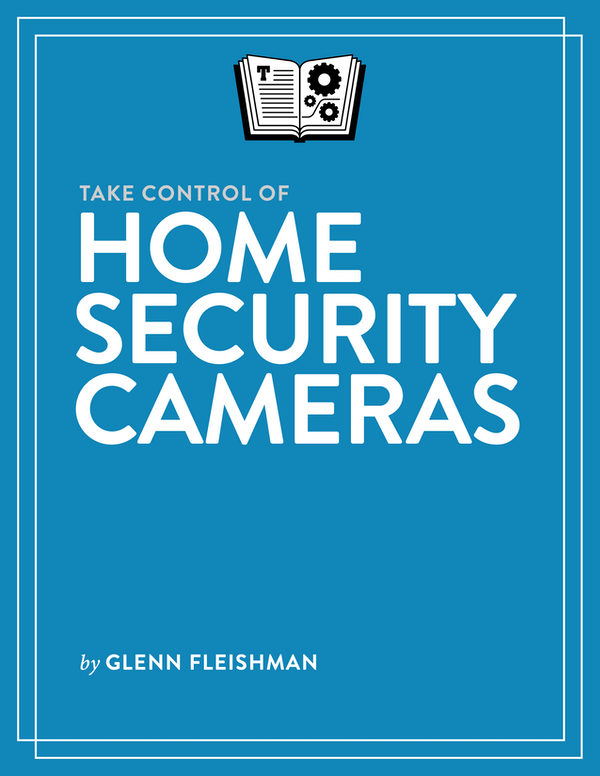