To mark Internet Day on October 29th, the BBC resurfaced Jeremy Paxman’s 1999 interview with David Bowie, in which the two discussed the broader implications of the Internet. Paxman held the firm position that the Internet was merely a tool, but Bowie’s thoughts were much more prescient. (Keep in mind that Bowie had launched his own Internet service provider, BowieNet, in 1998.) Bowie talked about the fragmentation of society that he saw as beginning in the 1970s and (correctly) predicted that the Internet would further fragment things away from a world where there were “known truths and known lies” toward a world where there are “two, three, four sides to every question,” something that would be simultaneously “exhilarating and terrifying” and would “crush our ideas of what mediums are all about.”

In 1999, Bowie couldn’t have predicted YouTube, social media, information wars, and the emergence of a “post-truth” era, but he had the insight to know that the Internet was more than just another fax machine. “It’s just a tool, isn’t it,” Paxman asked, clearly skeptical of Bowie’s ideas. “No, it’s an alien lifeform,” Bowie replied with a grin. Game, set, and match to David Bowie, who died in 2016. 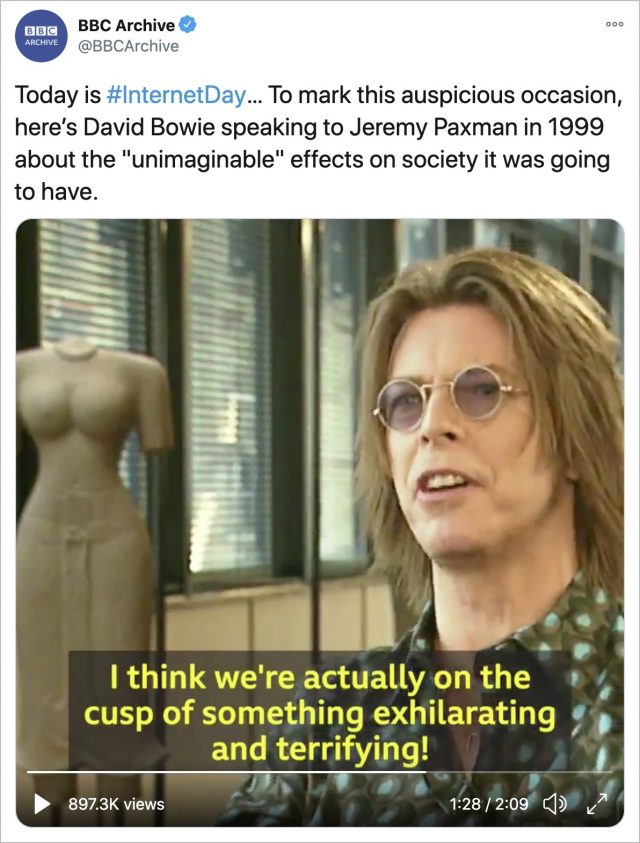 Comments About David Bowie’s 1999 Insights into the Internet