The COVID-19 pandemic has turned us all into amateur statisticians. How many tests are being performed? What’s the local infection rate? Is the rate of hospitalizations going up or down? What percentage of cases are severe or fatal?

We voraciously consume these numbers in an attempt to quantify the answer to this question: What is my risk of infection? Of course, there are plenty of follow-up concerns about the likelihood of a severe case, how that would affect our lives, what risk we would pose to others, and so on, but it all starts with the risk of infection.

At first blush, it might seem that the Apple/Google exposure notification technology might help in this regard (see “Apple and Google Partner for Privacy-Preserving COVID-19 Contact Tracing and Notification,” 10 April 2020). But no, it can’t help you assess your individual risk. It notifies you only if you were in the vicinity of someone who later reports a positive COVID-19 test. By definition, that information travels more slowly than the virus—you learn about an infection only after it’s too late to do anything differently. Not receiving a notification isn’t helpful, either. It could mean that people with whom you came into contact weren’t infected, didn’t know they were infected, chose not to report a positive test, hadn’t enabled exposure notifications, or weren’t carrying a smartphone.

Plus, although many of us would like to know if we had been exposed so we could quarantine to protect others, there are lots of people who actively don’t want to know because they can’t afford to quarantine. Even though the Apple/Google technology is a triumph on the privacy front, its benefits accrue primarily to society at large, not to the individual enabling it. Noble, yes, but less compelling than a direct selfish appeal.

NOVID, a new app developed by Carnegie Mellon University mathematician Po-Shen Loh (who also coaches the highly competitive US Math Olympiad team), focuses on the benefit to the individual in its take on anonymously tracking contacts through mobile phone proximity. What if, instead of stopping at one level of separation—your direct contacts—like the Apple/Google technology does, the app kept making additional connections, so you could learn if friends of friends were infected, and the friends of their friends, and so on? Would you change your behavior if you could see that infections were close to you or far away?

That’s what NOVID enables—it applies the “six degrees of separation” concept to infection awareness. (Keep in mind that “friends” here means “people running the NOVID app who have come into contact with one another”—there’s no requirement that you actually know anyone in the network.) In fact, NOVID goes further, tracking your personal contact network out to 12 degrees of separation. 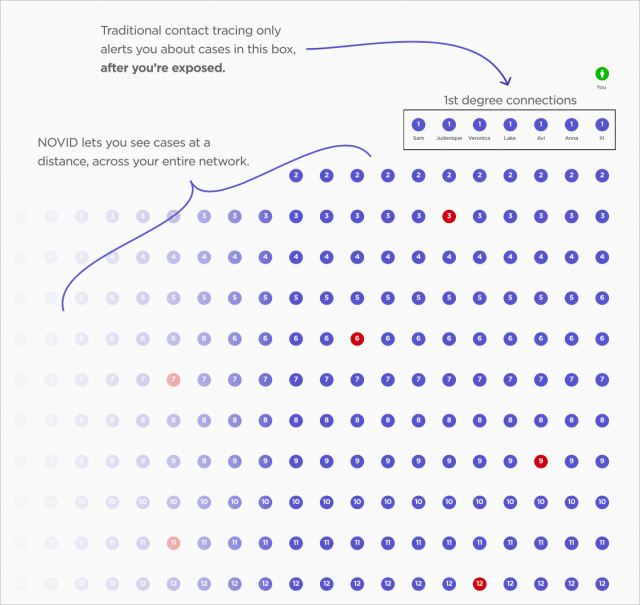 When someone in that broad network reports a positive COVID-19 test, NOVID can alert you if you’re one degree of separation away, just like the Apple/Google technology. More interesting is how that information can be used to describe the state of the overall network. Since the number of people at every level of the network grows exponentially, the number of infections at each level of the network will grow as well. Perhaps there are more than ten infections among your 12th- and 11th-degree connections, seven in the 10th level, four in the 9th level, two in the 8th and 7th, one in the 6th, and none in the 5th through 1st. The graph might look like this. 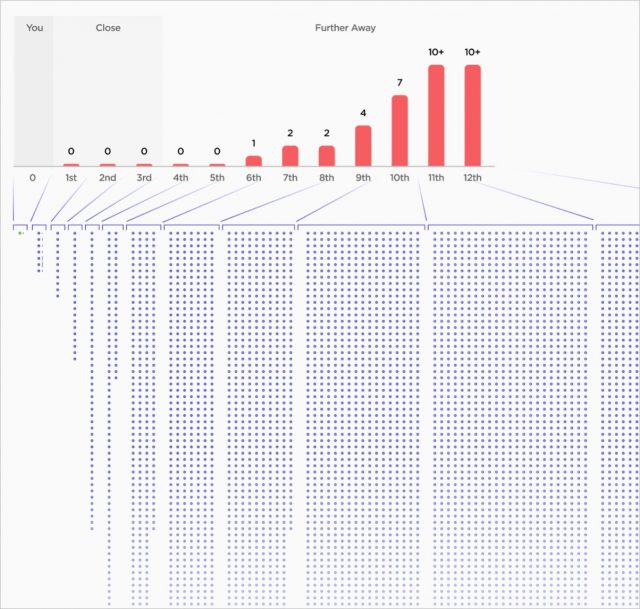 Thus, NOVID shows you how close the infections in your network are to you. The fact that there are no infections until you get to six degrees of separation suggests that it’s unlikely that you would be exposed under your current behavior. However, if infections started to pop up in your 3rd- or 4th-degree connections, you might want to take additional precautions. In essence, NOVID is an early warning system for COVID-19 infections.

It’s worth taking a few moments to think about how that might play out at low and high levels of community infection. If your area has a low level of infection, the utility of NOVID’s early warning system to most people is to confirm that they don’t need to worry much. However, if you are only a degree or two away from the handful of cases that do exist, you’d probably want to take significant precautions. In a high level of community infection, NOVID could either confirm that extra precautions were necessary or let you know that your particular network is relatively unaffected.

Technically, NOVID works a bit differently than the Apple/Google technology, which relies solely on Bluetooth. Instead, NOVID combines data from Wi-Fi, Bluetooth, and—optionally—ultrasound. Wi-Fi is useful only for determining general connections, so NOVID won’t generate exposure notification warnings should a contact detected only through Wi-Fi test positive. NOVID primarily relies on Bluetooth proximity to trigger exposure notifications because it’s most readily available. For the highest accuracy, however, NOVID can employ ultrasound to determine proximity within inches, thanks to the fact that sound travels at a constant rate and doesn’t pass through walls or floors well. Alas, NOVID can’t use ultrasound in the background on iOS devices as it can on Android, which renders it less effective for iPhone users.

If ultrasound is enabled, when NOVID detects another phone running NOVID through Bluetooth, both phones exchange a few seconds of high-frequency sounds that are far beyond the range of human speech (18.5–19.5 kHz). For this reason, NOVID requires permission to use the microphone, and it advertises the fact that an independent review by Georgia Tech’s CIPHER Lab confirmed that NOVID does not record, store, or transmit any recordings. And of course, you can just disable it in the settings if you prefer.

NOVID preserves anonymity in roughly the same way the Apple/Google technology does, by collecting only information like randomly generated identifiers, timestamps, distance measurements, and Bluetooth signal strength, along with positive test results. There’s nothing to connect you with any of that data on the backend. The major difference between NOVID and the Apple/Google technology is that NOVID must maintain information about how all the anonymous users are connected to build the full 12-level network.

One final note. In my testing so far, NOVID’s battery usage has been minimal—just a few percent per day—and less than Apple’s own Exposure Notifications entry in the Settings > Battery list.

The Many Informing the One

Beyond being able to see how close infections are, and if they’re moving closer or farther away, NOVID’s network approach can provide a lot more information to help you evaluate what’s happening. For instance, NOVID reports how many other NOVID users you’ve met per day, and if you tap that graph, you can see what proximity detection method was used. Suppose you learn that you met three other users but the connections were merely brief Bluetooth interactions. In that case, that’s more reassuring than learning that one of the interactions was a prolonged ultrasound (close range) interaction. And it becomes easy to discount members of your household with whom you have prolonged Bluetooth or Wi-Fi interactions. You can even get proximity alerts if you want to tell when you’re around other NOVID users.

Then there’s the NOVID Radar display, which shows either how many connections you have or the number of reported cases in each of your 12 degrees of connections. (Happily, there’s a See Demo button that shows you what it will look like before you have any connections.) 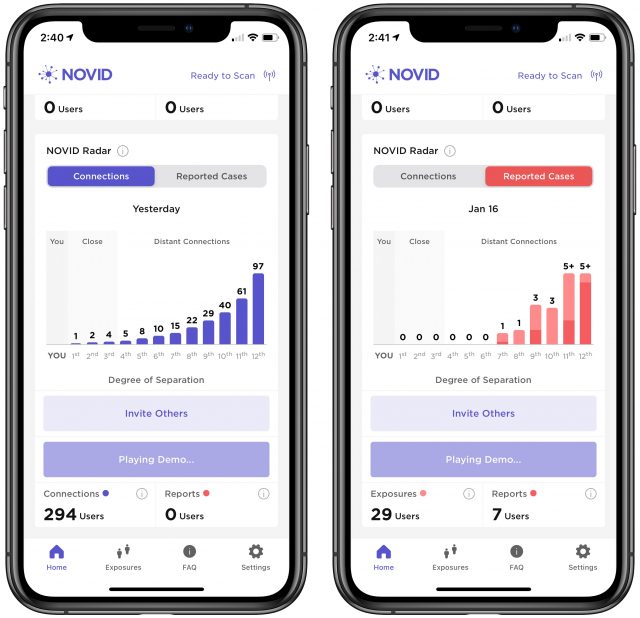 There’s also a Community Dashboard that provides insights about your area. When you sign up, you can join a “community” associated with the first three digits of your ZIP code. Also, some cities, like Santa Fe, and some institutions, like Georgia Tech, have adopted NOVID and are promoting its use. When you do that, NOVID provides details about how many people are in your community, how many cases there are, details about the average user’s network, the number of exposure notifications sent, and an iOS versus Android breakdown. None of this data is essential, of course, but it’s fun to look at, and it will give you a sense of the NOVID adoption in your community. 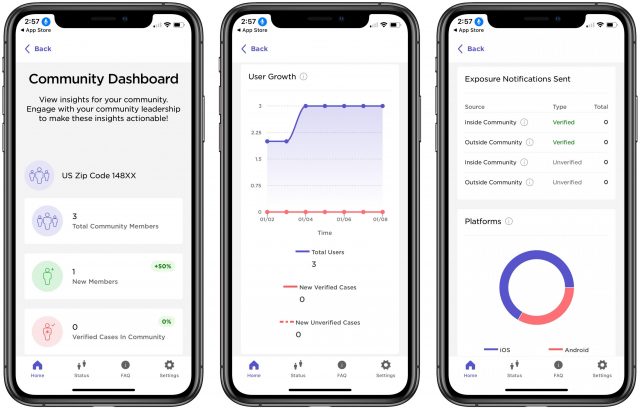 The other top-level screens in the NOVID app detail exposures (and let you report a positive test or exposure alert from an official contact tracer), provide an FAQ that explains more about NOVID in detail, and let you adjust a few settings. Most notable among those is the need for Background Mode on the iPhone, which NOVID needs to be able to monitor when the app isn’t open. (That’s an advantage of the Apple/Google technology being built into iOS and Android.) It also features a prominent Share button you can tap to send a canned message that will invite friends to NOVID. 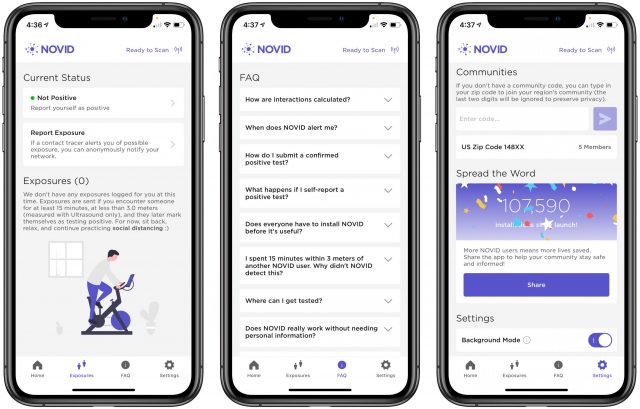 Obviously, the problem that NOVID faces right now is adoption. It has over 100,000 users, but many people reading this could be the first NOVID users in their communities. That might seem to be an insurmountable obstacle, but as Po-Shen Loh somewhat gleefully explained when I spoke with him, NOVID can spread along the same exponential lines of social connection as the coronavirus.

The app’s Share button text encourages everyone to invite two others. If everyone who downloaded NOVID did that, it would take only 33 generations of invitations before the entire population of the planet had been invited (see the Wheat and Chessboard Problem). Silly, I know. In the real world, many people won’t invite anyone, but perhaps tens of thousands of TidBITS readers can make up for a lot of the dead-end installations. Po-Shen Loh noted that although more is always better, NOVID needs only about a 20% adoption rate in a community for the data to be useful.

So let’s give it a try! If a metric boatload of TidBITS readers install NOVID, and each of us invites at least two other people—even if you just get your family members to install it—maybe we can provide the grassroots effort that’s needed for NOVID to take off.

Getting people accustomed to NOVID might provide a longer-term benefit. Leaving aside the threat of a future pandemic, we don’t yet know if we’ll need to get COVID-19 vaccines annually, like the flu shot. If that proves to be the case, seeing COVID-19 infections on the rise in your extended network could encourage you to get your annual shot sooner rather than later.

In theory, NOVID could also be repurposed to monitor the spread of any infectious disease. Having lost Christmas in 2019 to a bad case of the flu that hammered half of my extended family, I know I would have appreciated knowing that the disease was rampant in Santa Fe. Perhaps then we wouldn’t have visited the amazing—but undoubtedly germ-laden—Meow Wolf immersive art installation (currently closed, of course, but be sure to watch the video). Heck, would you bail on an unnecessary large social gathering—or at least wear a mask—if you knew that the common cold was spiking within your 1st- or 2nd-degree connections?

For now, I’d settle for getting a sense of just how close the 30–50 cases per day in Tompkins County are to me. And finally, if you’re interested in learning more about NOVID from the horse’s mouth, Po-Shen Loh has an explanatory video that’s similar to the conversation he and I had several days earlier.