Apple’s AirPods Max headphones will set you back $549. That’s a hefty price considering headphones with comparable features—such as active noise cancellation—can be purchased for much less.

So is it worth paying the Apple Tax?

Many already have. Shipping estimates at the Apple Store site have been pushed back to early April, with Apple CEO Tim Cook warning that the AirPods Max may be hard to come by for several months to come (see “Apple Weathers the Storm to Shatter Records in Q1 2021,” 27 January 2021). However, you might get lucky at your local Apple store if you keep checking. I’m not surprised the AirPods Max are hard to come by. They’re the nicest headphones I have ever used.

I define “headphones” as personal audio devices with a band resting on top of the user’s head and cups fitting atop or around the ears. That’s to differentiate them from in-ear audio accessories like Apple’s AirPods or the Flex earbuds from Apple subsidiary Beats by Dre.

I generally prefer compact earbuds over bulkier headphones because I usually find the latter uncomfortable, causing my ears and the top of my head to hurt from the weight and pressure. So when in-ear accessories such as the AirPods Pro got the sort of noise cancellation that had been a standard feature on high-end headphones for years, I largely lost interest in headphones. 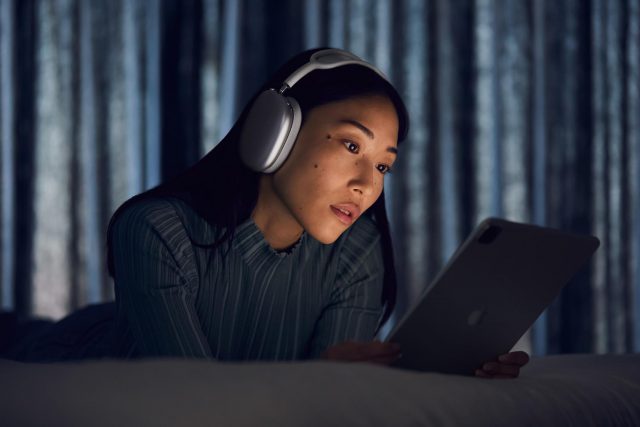 The AirPods Max have made me reconsider despite their sky-high price tag. They’re comfortable, elegant, ruggedly built, easy to use, and come with ingenious hardware features, great audio quality, and spooky-good noise cancellation, plus Apple-specific touches such as iCloud syncing and a Lightning charging port.

There are annoyances, such as a poor protective case and the lack of a cord for wired listening, but my AirPods Max experience has been mostly positive.

At $549—more than a new iPad and a pair of AirPods—you expect top-flight hardware, and Apple delivers. Everything about the AirPods Max feels premium-quality. The design includes: 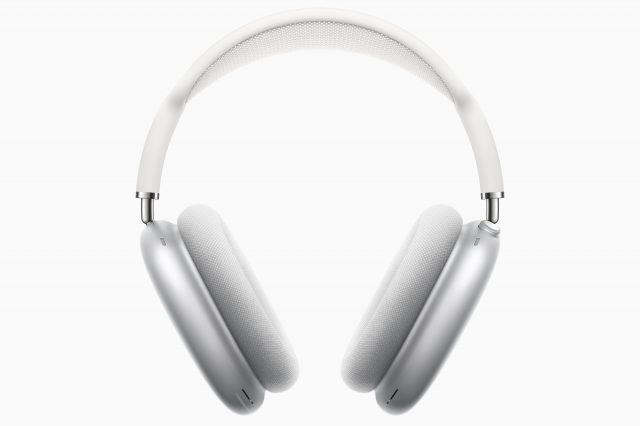 Overall, Apple has introduced a sophisticated design that is classy and comfortable. The AirPods Max are the first set of headphones that has afforded me hours upon hours of pain-free use (compared to, say, Beats’ Solo Pro headphones, which I can use for only an hour or two before they make my ears and head hurt).

But there’s a caveat: I have to take off my glasses because their earpieces interfere with how the headphone ear cups rest against my head and eventually cause me discomfort. Sorry, eyeglass wearers.

No matter how long I use audio accessories, whether from Apple or other makers, I can never seem to memorize what combination of presses, taps, and twists make things happen.

The AirPods Max distill user interaction down to two intuitive physical controls, both atop the right-side cup. 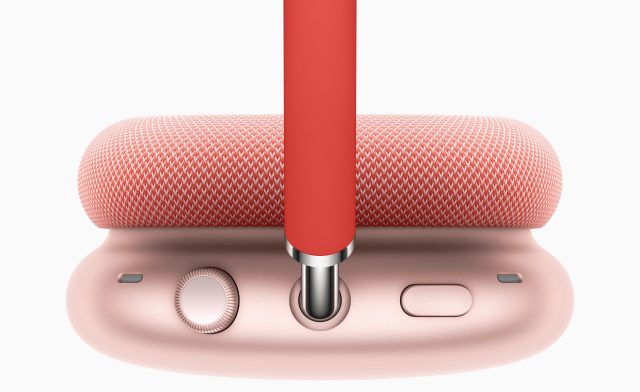 One of these is a Digital Crown, similar to that on the Apple Watch, for adjusting volume with twirls and for controlling playback and summoning Siri with various press combinations that are easy to internalize after a bit of practice.

The other control is a button for alternating between the Active Noise Cancellation and the Transparency mode along the lines Apple introduced with its AirPods Pro.

The right-side cup also incorporates a Lightning port at the bottom for charging via a Lightning to USB-C (included in the box) or a Lightning to USB-A cable. Apple didn’t include a power adapter with the AirPods Max, but just about any adapter you have on hand should work.

For those buying high-quality wireless headphones, noise cancellation is crucial. It’s a godsend on noisy flights or when working within a cacophonous multi-member household amid coronavirus quarantining.

The Active Noise Cancellation on the AirPods Max is excellent, if not a quantum leap ahead of what’s available on competing headphones from the likes of Beats, Bose, and Sony.

I wasn’t able to test this feature on a plane or bus since I have not been traveling or commuting during the pandemic. But I was impressed at how it filtered out the sound of my kitchen faucet, permitting me to focus more fully on podcasts during my dishwashing sessions. The active noise cancellation was less effective against my vacuum cleaner, reducing its deafening racket to a dull roar but not eliminating it.

As with the AirPods Pro, the noise cancellation is better at blocking uniform audio, less so sudden or variable sounds. For instance, I could make out my wife just well enough to carry on a conversation with her.

Along with the noise cancellation, the AirPods Max offer a Transparency mode to bring in instead of block external audio so that I’m more aware of my surroundings while listening to music and podcasts. As with the Transparency mode on AirPods Pro and Beats’ Solo Pro, it works very well.

High-end headphones can be a shock after years of relying on earbuds. Using the AirPods Max, I became aware of subtle sounds in movies and TV shows that had escaped my attention before: wind blowing through a field of wheat, the sound of crickets coming in through a porch door, background chatter in a bar, the clinks of spoons on coffee cups in a cafe, and the rustling of bedsheets.

Apple touts its custom-designed dynamic driver, saying that it “produces high-fidelity audio with ultra-low distortion, delivering rich bass, accurate mids, and crisp, clean high pitches.” I am not enough of an audiophile to parse all of those elements individually, but the headphones sound amazing. Music and movies have never sounded better to my ears.

While staying at home for the past year, I have become even more hyper-dependent on my computing gear to do my journalism job and to amuse myself on personal time. For sanity’s sake, I need as little friction as possible. Everything has to operate and interact seamlessly.

Charging up the stairs to my attic office, I bark a Siri command to turn on the lights via a nearby HomePod mini, fire up my Apple TV to turn my big-screen TV into a CNN console, flip open my MacBook Pro to begin work, and keep my AirPods or Beats at the ready to listen to audio from the Apple TV or MacBook Pro without difficulty or delay.

Within this context, the AirPods Max are exponentially more appealing than rival headphones, thanks to Apple’s famously tight ecosystem integration. For instance, the AirPods Max automatically switch among my Apple devices for fiddle-free listening. 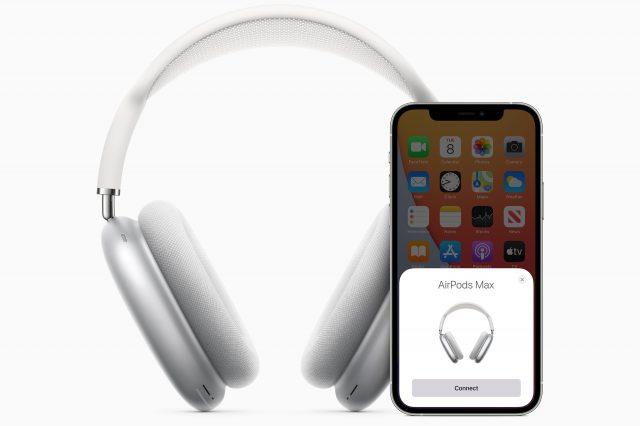 In addition, the AirPods Max boast a new mechanism for detecting when they are being worn. Using optical sensors in each cup, along with sensors where the headband meets each cup, the headphones know to pause when I pull them off one or both of my ears. Playback resumes when I push them back in position.

As expected, the AirPods Max also have:

About That Smart Case…

Protection is top of mind when purchasing such costly audio gear. You don’t want to ding your fancy headphones, something that is all but preordained if you would routinely take the AirPods Max on commutes, vacations, or business trips.

The protective Smart Case that Apple bundles with the AirPods Max does not distinguish itself here. The wrap-like accessory is made of a soft, plasticky fabric and accommodates the headphones’ cups once they have been rotated so that the AirPods Max lie flat. A flap on the Smart Case holds the cups in place. 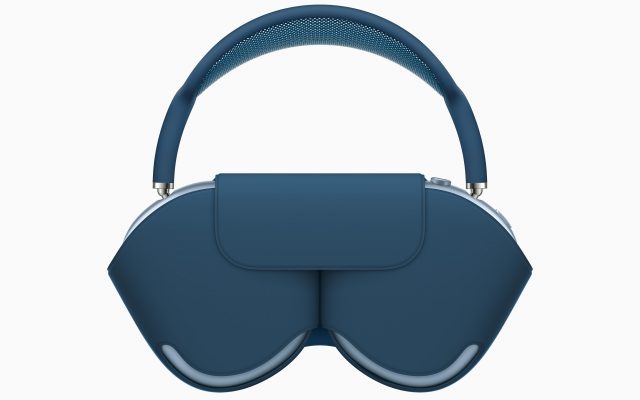 The Smart Case has been ridiculed as resembling a purse or brassiere (there are memes aplenty), but the bigger problem is that it leaves the headphones largely exposed. The cups aren’t fully enveloped due to cutouts in the case. Everything above the cups, including the headband, is entirely uncovered and unprotected. I’m especially concerned about the band’s delicate-looking mesh fabric, which does not look like it would fare well in a purse or backpack alongside keys and other sharp-edged objects.

The Smart Case has one useful tech function: it uses built-in magnets to put the AirPods Max into a low-power state; that’s the “smart” part. The AirPods Max lack an off button, so the battery charge will trickle away over a span of hours or days, but the case can help ensure that you have something close to a full charge even if the AirPods Max have been idle for a long time. A recent firmware update is said to fix a power-drain issue reported to bedevil some users even when they put the headphones in the case.

I’m more forgiving about the Smart Case than other reviewers since I’d see myself only using the AirPods Max at home. In that context, they offer enough protection. But for the many who would use the AirPods Max as travel headphones, better protection is a must.

WaterField Designs’ $99 Shield Case fully envelopes the flattened AirPods Max with your choice of sturdy exterior materials, including leather and ballistic fabric, along with an “ultra-plush” interior. WaterField sent me a ballistic sample that looks nondescript but offers excellent protection. 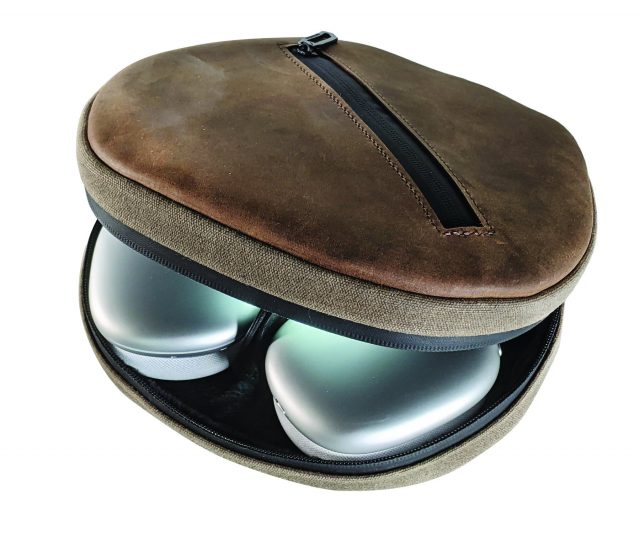 Pad & Quill, based in my Twin Cities back yard, offers a $129.95 leather case that doubles as a stand and has a cutout at the bottom for a charging cord. A sample the company cofounder dropped off impressed me with its stylishness, but its soft construction struck me as slightly less protective than the WaterField case. 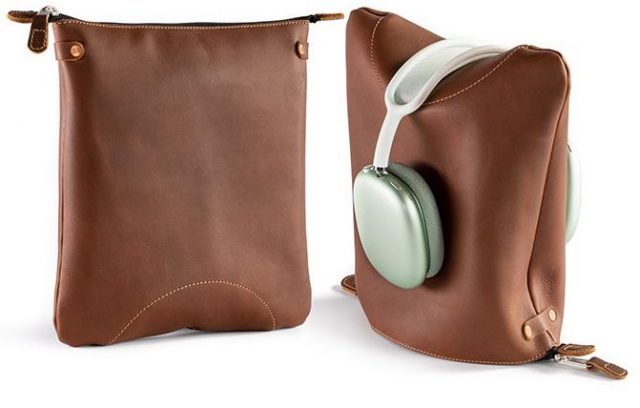 If you’re out of charge or want to preserve battery life, you can use the AirPods Max as wired headphones with a Lightning to 3.5mm audio cable ($35 from Apple). This approach is also said to yield superb audio, but I don’t have the necessary cable to judge for myself. For the price, you’d think Apple would include the cable.

Don’t try using a Lightning to USB-C cable to plug into a USB-C port on a Mac or iPad; it won’t work. Nor will that little white headphone adapter that used to be bundled with iPhones.

The AirPods Max are insanely pricey, no question. If you’re at all cost-conscious, you can get quality headphones with comparable features for much less. The Beats Solo Pro cost only $299.95, for instance, and provide equivalent active noise cancellation. Noise-canceling headphones from the likes of Bose and Sony hover around $350 to $400. And earbuds equipped with foam tips offer even more complete passive noise cancellation at a lower cost.

But while it’s too soon to call the AirPods Max a hit, they’re far from a flop, which doesn’t surprise me. People are willing to pay a premium for Apple’s brand.

In the case of the AirPods Max, your $549 gets you a unique design that has been well thought through—except for the terrible Smart Case. The AirPods Max are comfortable, rugged, and stylish. And the fact that they integrate seamlessly into the Apple ecosystem counts for a lot.

Not everyone is willing or able to pay so much for headphones. But if you are both, I think you’ll find it money well spent.

Comments About Apple’s AirPods Max Headphones Are Pricey but Good