One of the hallmarks of the Apple Watch is its selection of watch bands and the ease with which they can be swapped. I got my original Apple Watch with the silicone Sport Band, and while it fit acceptably, I never loved it. When I upgraded to a Series 2 a few years later, I got it with Apple’s woven nylon buckle band, and it too was just okay. I didn’t dislike either enough to buy another band, particularly at the exorbitant prices Apple charges, which start at $49, jump quickly to $99 and, as of this year, max out at an eye-watering $539 for the Hermès Ébène Barénia Leather Single Tour Deployment Buckle. I suspect each of the accent marks adds $100 to the price.

When Tonya replaced her original Apple Watch with a Series 3, we got it with the then-new nylon Sport Loop, which adjusts perfectly to any size wrist and is less sweaty than the Sport Band during runs. I took it over since Tonya was happy with her Sport Band, and I liked it so much that when the time came to upgrade to the Series 5, I got another Sport Loop (see “Upgrading from an Apple Watch Series 2 to a Series 5,” 20 January 2020). I was a little disappointed to discover that Apple had each year introduced and then discontinued various colors, such that I’d missed out on some I preferred from previous years. I mentioned in that article that I’d seen cheap knock-offs on Amazon, but I never got around to buying any.

The main benefit of the Sport Loop is its infinite adjustability, that is, exact sizing to your wrist. With the Sport Band and woven nylon buckle band, I always had to put up with holes not being in quite the right spot. It’s breathable, is easily rinsed when it gets sweaty, dries quickly, and can’t be knocked out of adjustment once you attach the Velcro-like hook-and-loop fasteners. It may not be as elegant as leather or metal, but Apple has always made it in a variety of attractive colors. The only real downside I’ve discovered is that its hook-and-loop fasteners can lose their grip when you’re swimming if you open and close it when it’s wet. Overall, I’ve been extremely pleased with the Sport Loop bands.

Fast-forward to the present. I recently replaced my 5-year-old Garmin Forerunner 620 with a new Forerunner 645 because the battery on the 620 was starting to fail on longer runs, especially in the cold. The new Forerunner 645 came with a horrible, plasticky-feeling buckle band that was difficult to put on and seemingly impossible to fit correctly. After a minor brainstorm—“Maybe I could get a sport loop band for it?”—and a quick Amazon search, I discovered that for a mere $8.99 (now down to $6.99), I could buy a new Nylon Sport Quick Release band that worked just like Apple’s Sport Loop. That was too cheap to pass up, so I put it in my cart. 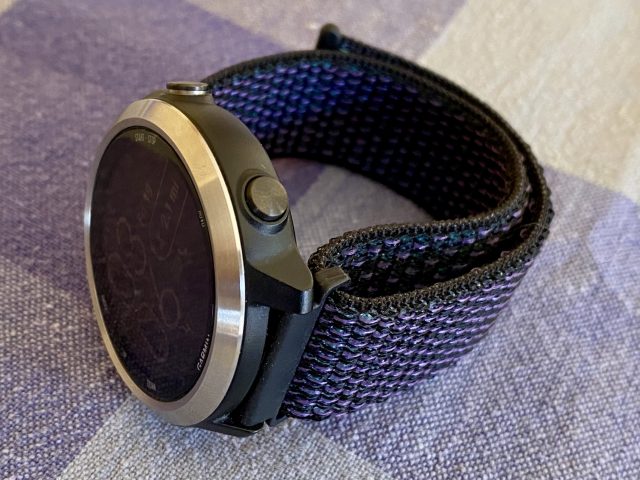 Emboldened by my success at such a bargain price, I decided to introduce Tonya to the wonders of the Sport Loop with a pretty purple band for a Valentine’s Day present (hey, it wasn’t a chainsaw!) and match it with a new red one for myself. The knock-offs I linked to in the previous article were no longer available on Amazon, nor was the company in general. I thus couldn’t get away with buying five bands for $25, but I did find a reseller called Ruiboo that sold the bands for $12.99 each. All the bands came a few days later, they were as easy to install as Apple’s versions, and Tonya and I have been using them happily ever since.

I waited too long to write this article, and just six weeks later, Ruiboo has essentially disappeared from Amazon, just like the previous knock-off reseller I had identified. I can find only a couple of resellers on Amazon with similar products now, but they seem rather sketchy, with few or no reviews. I wonder if some of these resellers exist only as long as they have a line on some stock or a connection with a particular contract manufacturer. Or Apple and Amazon are playing whack-a-mole with such companies—perhaps Apple has some intellectual property rights involved.

eBay may be a better source for these watch bands—a search on “nylon sport loop Apple Watch band” turns up over 1200 hits. The top hit is accplus, a vendor that has supposedly sold over 36,000 units and is pricing identical-looking bands at $5.29, currently on sale for $3.29 with a “buy 2, get 1 free” deal. With free shipping. Seriously. 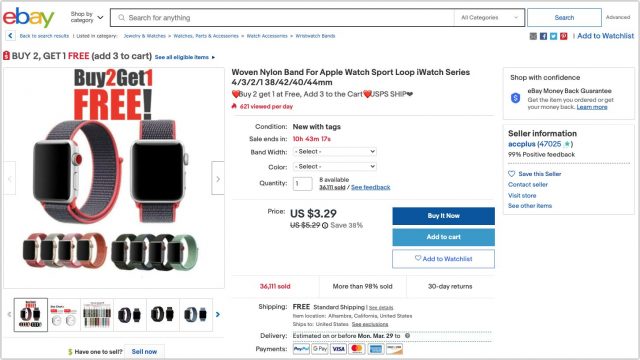 For prices as low as $5 to $10, could these knock-off bands be as good as Apple’s $49 bands? I can speak only to the units I’ve gotten, but the simple answer is yes. The nylon band material feels the same, the parts that attach to the Apple Watch are sized perfectly and work identically, and even the plastic band end has the same squared-off cylinder design. The only difference I can discern is in the color of the little plastic hook pads that you slap down on the band to fasten it. On my old Midnight Blue band from Apple, the pads are a light purple, whereas on Tonya’s new purple band (which turned out to be nearly identical to the Midnight Blue), the pads are black. On my red band, the pads are white. Since you see the pads only when you’re fastening the band, this is the most trivial of differences. 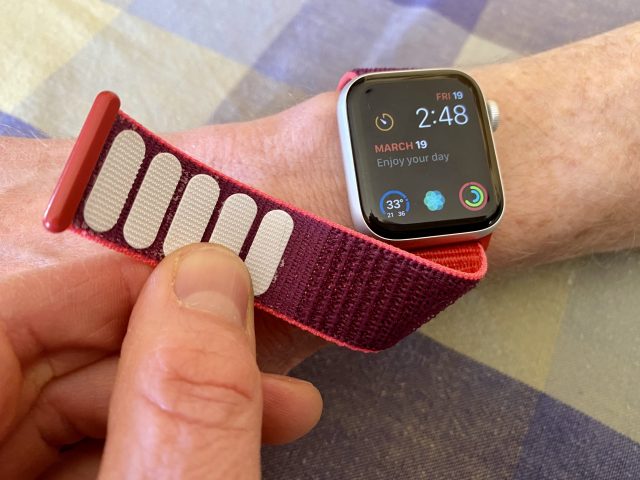 As much as I like the Sport Loop design, once I thought of writing this article, I thought that perhaps I should see if knock-offs of other band styles might be good as well. I’ve long considered Apple’s stainless steel mesh Milanese Loop to be highly elegant, but I could never bring myself to spend $99 on a watch band. As with the Sport Loop, it took no time to find a knock-off reseller that would sell me a faux Milanese Loop for just $9.99. I wore it for a week and generally liked it. However, I’ve now switched back to the knock-off sport loop for everyday wear. I don’t have a genuine Apple Milanese Loop to compare it to, but the knock-off’s magnet wasn’t quite strong enough to resist being loosened if I caught it on clothing or some other object, so I found myself retightening it a few times during the day. It also tended to snag my arm hair on occasion. It wasn’t bad, but I’ll reserve it for dress-up occasions, if those ever become a thing again. I’d provide a link, but that reseller has disappeared from Amazon too. Spooky. 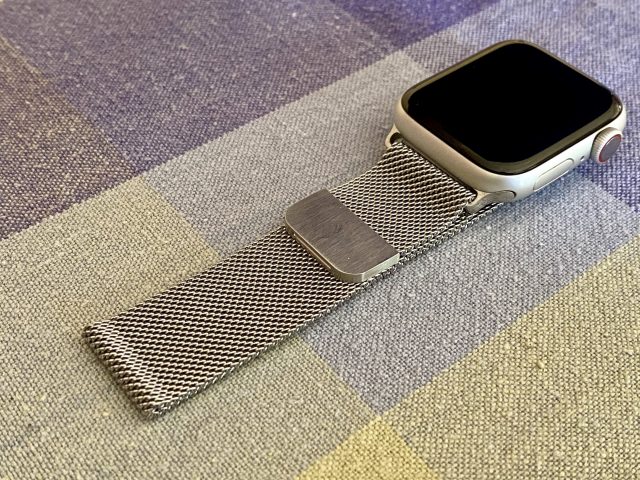 I obviously can’t speak for all knock-off band manufacturers, but I’ve now tried four knock-off bands (including the one for my Forerunner 645) and have been pleased with all of them. All while spending less than a single $49 replacement band from Apple. I’m somewhat surprised this is the case because I’m generally dubious of cheap knock-offs. You often get what you pay for, and maybe the low cost is worth the tradeoffs, or maybe it isn’t. But with these knock-off bands, I simply can’t see enough differences to justify Apple’s stratospheric markups. If a company can make money selling these things for $5, it’s hard to recommend spending ten times that to buy from Apple.

Comments About In Praise of the Knock-Off Nylon Sport Loop