Apple aspired to improve the wireless phone charging experience last year when it unveiled MagSafe, which relies on magnets built into the latest iPhones and complementary accessories to make positioning a snap, literally. But Apple’s MagSafe accessories are a mixed bag (see “MagSafe Is Cool, but Is It Worth the Trade-Offs?,” 6 November 2020):

However, it seems pointless to criticize Apple accessories because any flaws will inevitably be addressed by third-party products that offer enhanced designs with improved functionality, often at lower prices. I’ve been trying out a variety of such MagSafe products, with an emphasis on those that solve particular problems. Here are seven that I think stand out.

The handsome and hefty MagSafe Mount from Nomad is not a MagSafe charging pad but a holder for Apple’s MagSafe Charger puck. Why bother? The stainless steel MagSafe Mount adds just enough weight so that the charger remains on the desk when you grab your iPhone with a bit of a wrist twist. The combo retains MagSafe’s magnetic alignment so you can easily position your iPhone properly. 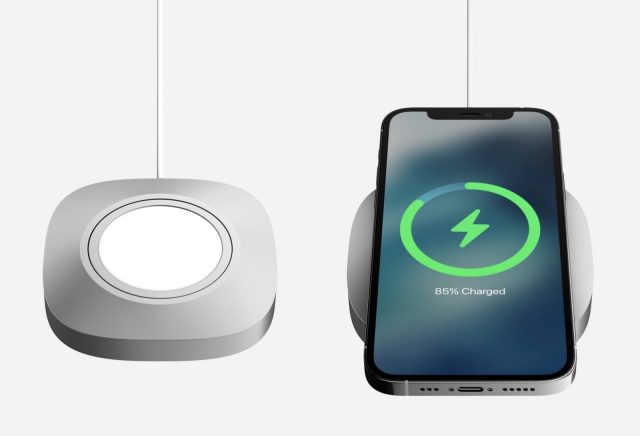 The MagSafe Mount’s fit and finish are impeccable, with a hole to accommodate the MagSafe Charger precisely (you’ll never want to remove it), a padded underside to protect furniture from scuffs and scratches, and a cool, curvy vibe.

Online storefronts are chockablock with MagSafe Charger holders, but they tend to be made from lightweight materials like silicone and often rely on adhesives to remain in place.

In comparison, the $79.95 MagSafe Mount is a class act, if an expensive one. No wonder it’s backordered to at least July.

Sometimes you want to be able to see and interact with your iPhone while it is charging. For that, an angled MagSafe mount is ideal.

Twelve South’s $39 Forté is one example of this. It incorporates a cradle mounted on an angled metal arm, which screws onto a sturdy metal base. 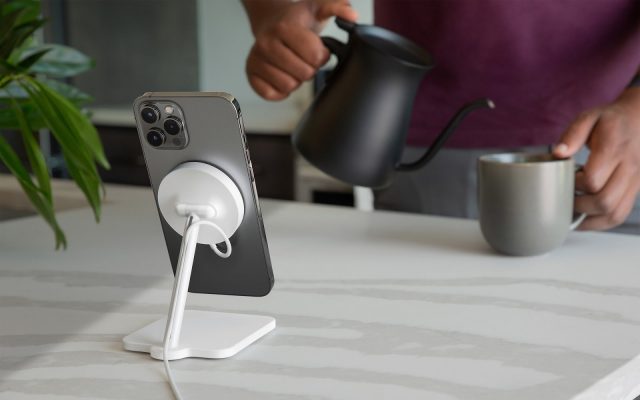 Apple’s MagSafe Charger puck fits tightly into the cradle, with its cable curving backward and into a groove in the arm. This is inelegant, with the cord protruding awkwardly downward from the MagSafe disk, but impossible to avoid.

Once the iPhone is on the charger, you can rotate it from portrait to landscape orientation as needed.

Better yet, a hinge on the back of the cradle lets you adjust the angle of the iPhone from almost perpendicular to the desk surface to parallel with it. The latter positioning would be handy if you wanted to repurpose the MagSafe surface as an AirPods Pro charger. The Forté’s adjustability sets it apart from the many fixed-angle MagSafe stands I have seen online. 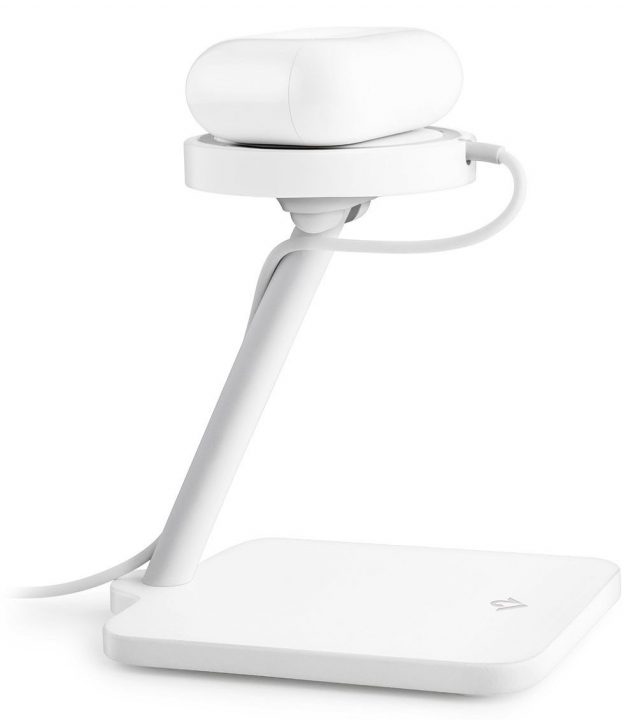 Twelve South also offers the $39.99 Ston’r, a weighted base for the MagSafe Charger that may start being sold in head shops. It’s basically the same as Nomad’s MagSafe Mount but made of marble and half the price. I haven’t tried it, but it looks like it would do the job nicely.

The Boost Charge Pro 3-in-1 Wireless Charger Stand is possibly the fanciest MagSafe charger on the market. It provides both MagSafe and Apple Watch charging pucks on an elevated metal arm, and it also incorporates a Qi surface into its circular base for charging an AirPods case or any Qi-compatible phone. 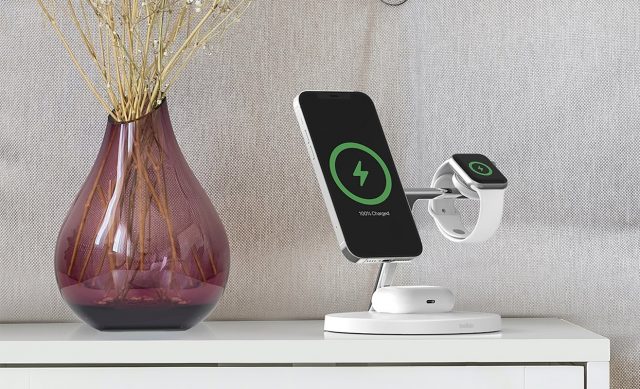 The Boost Charge Pro 3-in-1 is an officially sanctioned “Made for MagSafe” accessory that charges an iPhone 12 at 15 watts, unlike the many “MagSafe-compatible” chargers that can manage only 7.5 watts. Plus, the cable on its bundled wall charger is plenty long, providing more flexibility than the too-short cord on Apple’s MagSafe Charger.

I do have quibbles. The Apple Watch is often askew on its elevated puck no matter how much I adjust it. In addition, the Boost Charge Pro 3-in-1 is pricey at $149.99. If you don’t need the Apple Watch charger, you can instead opt for the $99 Boost Charge Pro 2-in-1 Wireless Charging Stand, which omits the watch puck but keeps the elevated MagSafe puck along with the Qi pad built into the base. You won’t go wrong with either Belkin product, if you can afford them, because of the speedier charging and the first-rate fit and finish. Both are available in black or white.

If you’re interested in MagSafe accessories, keep an eye on Belkin because it is releasing products at a fast clip. It has announced a MagSafe mobile battery, a portable charging pad, a mount for use with exercise equipment, and even a magnetic phone mount with face tracking, among others. All are Made for MagSafe.

MagSafe would seem to be ideal for car mounts. But most of the accessories I’ve seen in that space magnetically hold your iPhone but require you to plug in a Lightning cable to charge it, seemingly defeating the purpose.

ESR’s $39.99 HaloLock Magnetic Wireless Car Charger Mount provides its own power. There’s still a cable—the power has to come from somewhere—but it plugs into the mount and not the iPhone, with the other end going into your vehicle’s USB port. You likely won’t get speedy charging since those auto ports tend to be underpowered, but at least the convenience is there. It attaches to your car’s vents. 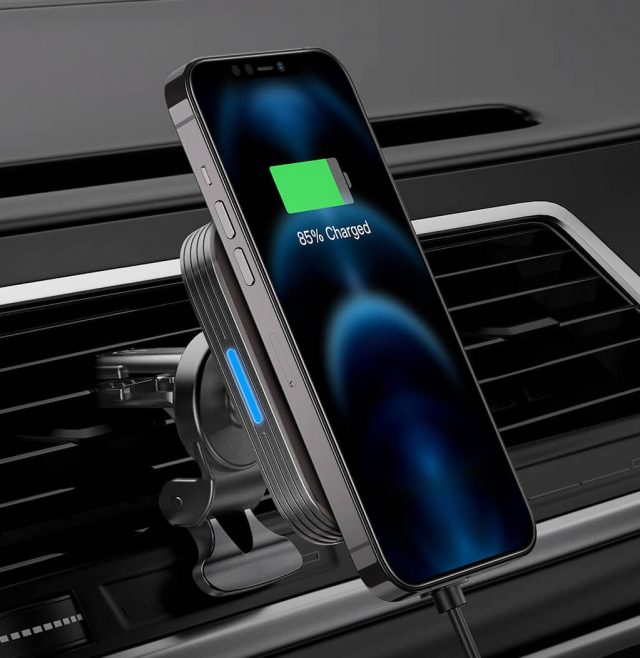 The HaloLock Magnetic Wireless Car Charger Mount is made of plastic but feels sturdy, and it holds the iPhone securely. In my experiments, it took a pretty nasty bump in the road to shift it, and standard jostling never dislodged it. You should definitely use a MagSafe iPhone case from Apple or another manufacturer to maximize the magnetic connection; a non-MagSafe case, with just the iPhone providing the magnetic adhesion, is insufficient.

ESR also sells the $45.99 HaloLock Dashboard Wireless Car Charger. The front part of the product that holds the iPhone is the same, but the rear mount is designed to attach to dashboards and windshields.

I don’t like this product as much as the vent mount for reasons having nothing to do with MagSafe: It attaches to the dashboard or windshield using an adhesive mount instead of the suction kind with a lever to ensure solid anchoring. And because it is longer with more moving parts, it shakes quite a bit more when the car is in motion. Also, it obstructs the driver’s view to some degree no matter where it’s placed; the vent mount doesn’t. 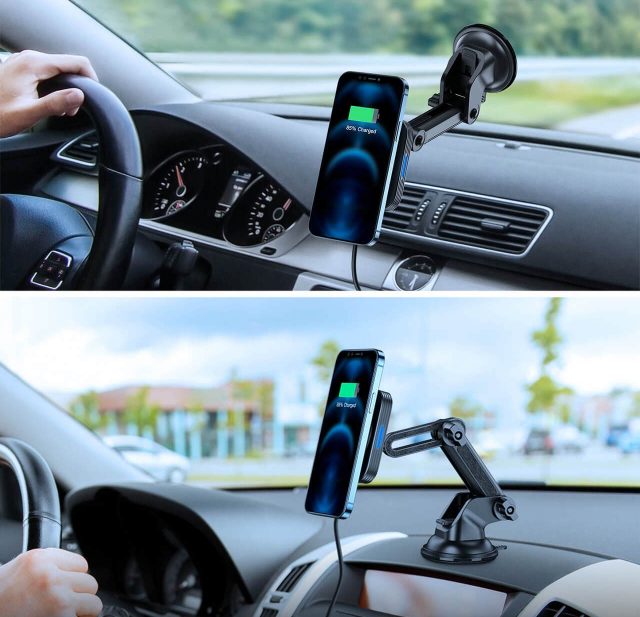 Neither of these products is Made for Magsafe. I know of only one Made for MagSafe car mount, Belkin’s $39.99 Car Vent Mount PRO with MagSafe, but it only holds the phone and doesn’t charge it.

I have seen some grumbling at the lack of a Made for Magsafe car mount that can charge an iPhone, but what would that even look like? Would Apple sanction a MagSafe mount that trickle-charges using a USB port and gets nowhere near MagSafe’s 15-watt charging rate? Am I missing something here?

The ecosystem of MagSafe accessories has been filling out nicely since Apple announced the technology late last year. Third-party manufacturers have scrambled to offer MagSafe pucks, stands, batteries, car mounts, wallets, and much more. An Amazon search for “MagSafe” turns up more than 10,000 options. Many seem sketchy, from companies you’ve never heard of. Avoid those.

If you stick to well-known brands, however, you will still have plenty of options. For instance, PopSockets fans will be delighted to learn that MagSafe-compatible PopGrip and PopWallet accessories are now available. These MagSafe products from Nomad, Twelve South, Belkin, and ESR should serve you well, too.