In many parts of the US, it has long been possible to make local calls with just the seven-digit phone number; the three-digit area code was implicit for calls between numbers using the same area code. Last year, however, the Federal Communications Commission decided to establish 988 as an easy-to-remember three-digit phone number for Americans to use to reach the National Suicide Prevention Lifeline in times of crisis. That hotline is currently accessible at 1-800-273-TALK (8255), and the 988 number will go into effect on 16 July 2022.

Since some areas that use seven-digit dialing also use 988 as the first three digits of the number, the FCC is requiring all carriers to implement ten-digit dialing in those areas, with 24 October 2021 as a cutoff date. T-Mobile recently alerted its customers to this change, providing a list of area codes by state that will lose access to seven-digit dialing in October. If you’re in one of those area codes, you need to update stored seven-digit phone numbers to include the area code; calls placed with seven-digit numbers may not complete, and you’ll hear a recording explaining why. 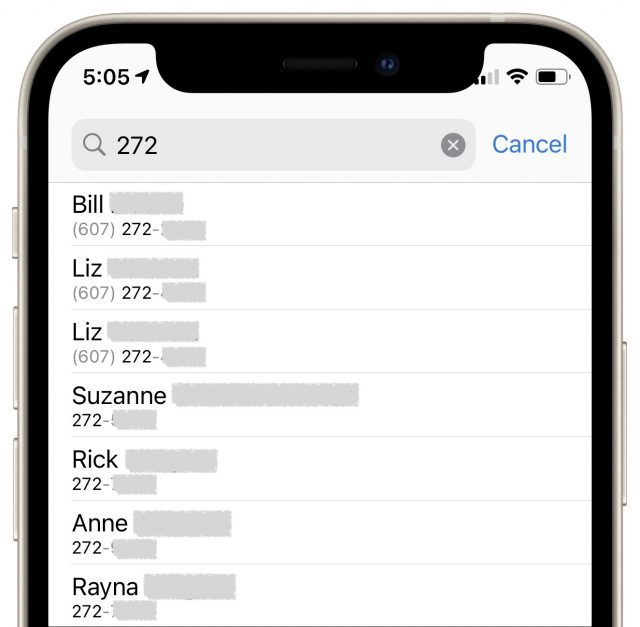 Luckily, Apple makes it easy to find offending phone numbers in the Contacts app on the iPhone and iPad. Just search for the three-digit exchanges that are commonplace in your area to see which contacts lack the area code. After you tap a contact with a too-short phone number, the only hard part is remembering to tap Edit instead of the phone number (which immediately calls the person).

Perhaps an enterprising community member can whip up something in Shortcuts that will add an area code to all seven-digit numbers.