Apple’s next product announcement event will be held on 14 September 2021 at 10 AM PDT from the company’s Apple Park headquarters. You’ll be able to stream the event from Apple’s website or the Apple TV app. You can also add the event to your calendar. 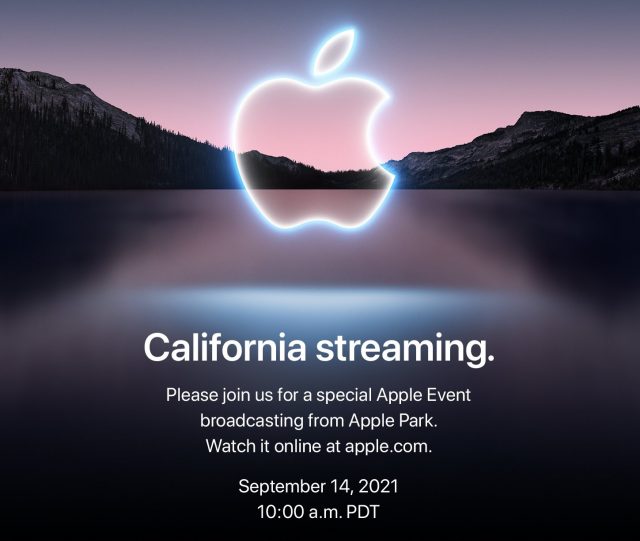 Unlike last year, when Apple’s iPhone release was delayed until October, we expect new iPhones will be announced at this event, along with new Apple Watch models. If the rumor mill is to be believed, Apple will announce an iPhone 13 in plain, Pro, mini, and Pro Max flavors with smaller notches and 120Hz ProMotion displays.

The rumor mill also points to redesigned and slightly larger Apple Watches. Mark Gurman of Bloomberg reports that each size will be 1 millimeter larger than the current models, increasing to 41 and 45 millimeters. The new design will also reportedly have flatter edges. Other rumored features include blood pressure, blood sugar, and fertility monitoring.

We may be waiting a while for the Apple Watch Series 7 to ship because it’s reportedly suffering from the supply chain challenges that Tim Cook warned about (see “Apple’s Q3 2021: Still Making Money Hand Over Fist,” 27 July 2021). However, analyst Ming-Chi Kuo now says Apple has resolved those issues.

We’ve also seen rumors of new AirPods. Apple hasn’t updated them for a few years, so it’s reasonable to expect something new this year, though they may not make the cut for inclusion in this announcement.

Apple will almost certainly launch at least iOS 15 and iPadOS 15 either that day or very soon after. My new book, Take Control of iOS 15 and iPadOS 15, covers all of the new features in these new operating systems so you can get ready. It’s also likely that Apple will push out watchOS 8 and tvOS 15 at the same time. Last year, however, the company delayed the macOS 11 Big Sur update until November, and something similar could happen with macOS 12 Monterey this year.

You can learn about everything Apple announces with us by joining us in the #events channel of our SlackBITS group. We’ve been chatting with our readers during the events for a few years now, and it’s always a good time. To join the group, go to slackbits.herokuapp.com, enter your email address, and agree to the code of conduct. You’ll receive an invitation in email right away.